ABSTRACT: Meloxicam (MEL) is an oxicam derivative and a member of the enolic acid group of non-steroidal anti-inflammatory drugs (NSAIDs). Most of the reported methods for HPLC analysis of Meloxicam are cumbersome, time-consuming and expensive. Reverse phase chromatographic analysis was performed on a C18 Hi Q Sil column with methanol–water- orthophosphoric acid (80:19.9:0.1 % v/v) at a flow rate of 1ml/min and detection wavelength of 360 nm. System suitability tests essential for the assurance of quality performance of the method were performed. The method was validated for accuracy, precision, reproducibility, specificity and robustness, limit of detection (LOD) and limit of quantification (LOQ). A single sharp peak was obtained for MEL at Rt of 4.38 ± 0.02 min. The polynomial regression data for the calibration plots exhibited linear relationship (r = 0.999) over a concentration range of 4–20µg/ml and the linear regression equation was y = 43754x - 2094. Accuracy ranged from 99.33 to 100.45% and the % coefficient of variation (CV) for both intra-day and inter-day precision was less than 2%. The LOD and LOQ values were 480 ng/ml and 680 ng/ml, respectively. The proposed method gave good resolution for MEL. System suitability tests and statistical analysis performed prove that the method is precise, accurate and reproducible, hence can be employed for routine analysis of MEL in bulk and commercial formulations. 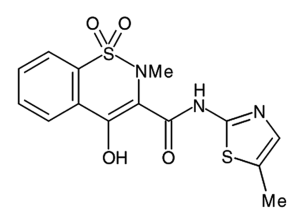 Various analytical techniques are reported for the analysis of MEL in pharmaceuticals like, UV spectrophotometry 4-5, fluorimetry 4, capillary electrophoresis 6, pulse polarography 7, electrochemical oxidation 8, electrochemical reduction 9 and voltametry 10. HPLC is the most commonly used method for analysis of MEL. Few HPLC methods for estimation of MEL in pharmaceutical dosage forms as well as biological fluids; some of them make use of buffer in the mobile phase and they are cumbersome, time-consuming and expensive 11-14. Method validation is an essential step in drug analysis and it confirms that the analytical procedure employed for the analysis is suitable for its intended use and shows reliability of the results produced by any method. The primary objective of the present work was thus to develop and validate HPLC method for MEL, which could also be employed for the routine analysis of the drug in pharmaceutical dosage forms. In the proposed method, the mobile phase was used directly for the dilution of the formulation after filtration, and then further used for analysis. Direct use of the mobile phase as diluent for formulations in quantitative analysis minimizes errors that occur during tedious extraction procedures.

Chromatography method: The chromatograph system comprised of a Jasco PU-980 pump equipped with a Jasco UV-975 detector and a Rheodyne injector with a 20-microlitre loop. Data integration was done using a Borwin software package V1.21. Samples were injected into a Hi-Q-Sil C-18 column (4.6 x 250mm, 5μ particle size). Mobile phase flow rate was 1ml/min. The drug was analyzed at a wavelength of 360nm.

Linearity: A series of standard curves were prepared over a concentration range of 4-20 μg/ml from a stock solution of MEL (1mg/ml) in Methanol. Dilutions were prepared in the mobile phase: methanol–water- orthophosphoric acid (80:19.9:0.1 % v/v). The procedure for analysis follows that described earlier under the subsection, ‘Chromatography method’. The data from peak area versus drug concentration plots were treated by linear least square regression analysis. The standard curves were evaluated for intra-day and inter-day reproducibility. Each experiment was repeated in triplicate.

Precision: Precision is the measure of how close the data values are to each other for a number of measurements under the same analytical conditions. The three components of precision, i.e., repeatability, intermediate precision and reproducibility, in accordance with ICH recommendations, were determined as follows:

Analysis repeatability: It was obtained by determining the relative standard deviation (RSD) of replicate samples (n=3) of the accuracy study.

Reproducibility: The reproducibility of the method was checked by determining precision on the same instrument, but by a different analyst. For both intra-day and inter-day variation, solutions of MEL at three different concentrations (8, 12, and 16 μg/mL) were analyzed in triplicate.

Accuracy: Accuracy is the measure of how close the experimental value is to the true value. Recovery studies by the standard addition method were performed with a view to justify the accuracy of the proposed method. Previously analyzed samples of MEL (12 μg/ml) were spiked with 50, 100, and 150% extra MEL standard and the mixtures were analyzed by the proposed method. The experiment was performed in triplicate. Recovery (%), RSD (%) and standard error of mean (SEM) were calculated for each concentration.

Sample Solution Stability: The stability of the drug in solution during analysis was determined by repeated analysis of samples during the course of experimentation on the same day and also after storage of the drug solution for 72 h under laboratory bench conditions (25±1°C) and under refrigeration (8±0.5°C). An accurately weighed quantity of the pure drug was dissolved in methanol and suitably diluted with mobile phase to get a final concentration of 12μg/ml. The solution was subjected to HPLC analysis immediately and after a period of 24, 48 and 72 h.

Specificity/Selectivity: To assess the method selectivity marketed tablets were analyzed. Ten tablets (strength: 15 mg/tablet) were crushed and triturated well in a mortar. A powder sample, equivalent to 15mg of MEL, was accurately weighed and transferred to a 25ml volumetric flask. The drug was extracted into methanol and mixed thoroughly for 30 min using a sonicator. The solution was filtered through 0.45 micron pore filter after making up the volume, adequately diluted with mobile phase and analyzed by the proposed HPLC method. The possibility of interference of excipients with the analysis was studied.

System Suitability Tests: The chromatographic systems used for analyses must pass the system suitability limits before sample analysis can commence. The capacity factor (K), injection repeatability (as described earlier in the subsection, ‘Precision’), tailing factor (T), theoretical plate number (N) and resolution (Rs) for the principal peak and its degradation product were the parameters tested on a 12 μg/mL sample of MEL to assist the accuracy and precision of the developed HPLC system.

Method development: Methanol- water- ortho phosphoric acid (80: 19.9: 0.1 % v/v) was selected as the optimum mobile phase. Under these conditions the retention time and tailing factor were 4.38±0.02 min and 1.00 respectively. A typical chromatogram is represented in Fig. 3 (d).

Linearity:Peak area versus drug concentration was plotted to construct a standard curve for MEL. The polynomial regression for the calibration plots showed good linear relationship with coefficient of correlation, r= 0.999±0.0091; slope= 43754±126.65 and intercept= 2094±59.33 (n= 6) over the concentration range studied. The range of reliable quantification was set at 4-20μg/ml as no significant difference was observed in the slopes of the standard curves in this range. The linear regression data for the calibration plot is indicative of a good linear relationship between peak area and concentration over a wide range (Fig. 2). The correlation coefficient was indicative of high significance. The low values of the standard deviation, the standard error of slope, and the intercept of the ordinate showed the calibration plot did not deviate from linearity.

Precision: Precision was measured in accordance with ICH recommendations. Five consecutive injections of 12 μg/mL solution of MEL by the proposed method showed excellent injection repeatability with RSD of only 0.55%. Repeatability of sample injection was determined as intra-day variation while intermediate precision was determined by measuring inter-day variation for triplicate determination of MEL at three different concentrations. The results of the determination of repeatability, intermediate precision and reproducibility are listed in Table 1. Reproducibility was checked by measuring the precision of the proposed method with analysis being performed by another person. The low RSD values indicate the repeatability and reproducibility of the method.

Recovery: The recovery of the method, determined by spiking a previously analyzed test solution with additional drug standard solution, was found to be in the range of 99.33-100.45%. The values of recovery (%), RSD (%) and SEM listed in Table 2 indicate the method is accurate. 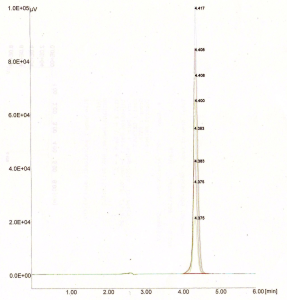 FIG. 2: LINEARITY BETWEEN PEAK AREA AND CONCENTRATION OVER A WIDE RANGE

Robustness: There was no significant change in the retention time of MEL when reagents (acetonitrile and glacial acetic acid) from different lots and different manufacturers were used. The concentration of the solution analyzed was 12 μg/mL and the % RSD ranged from 0.132 to 1.366 %. The low values of the RSD indicated the robustness of the method.

Stability: There was no significant change in analyte composition (sample concentration = 12 μg/mL) over a period of 72 h. The mean RSD between peak areas, for the samples stored under refrigeration (8 ± 1°C) and at laboratory temperature (25 ± 1°C) was found to be 1.126% and 0.983% respectively, suggesting that the drug solution can be stored without any degradation over the time interval studied.

Specificity (Analysis of MEL from marketed tablets): A single peak was observed at the retentiontime of MEL when a suitably diluted solutionof the tablet formulation was chromatographed. No interaction was observed between MEL and excipients present in thetablets. The MEL content was found to be99.58% and the RSD was 0.97%. The lowRSD indicated the suitability of this method for routine analysis of MEL in pharmaceutical dosage forms.

System Suitability Tests: The results of the system suitability tests assure the adequacy of the proposed HPLC method for routine analysis of MEL. The capacity factor (k) was found to be 1.88, indicating that the MEL peak is well resolved with respect to the void volume. The RSD of five consecutive injections performed under the precision test was found to be 0.58% and thus shows good injection repeatability. The tailing factor (T) for MEL peak was found to be 1.00, reflecting good peak symmetry. The theoretical plate number (N) was found to be 7444, thus demonstrating good column efficiency.

DISCUSSION: The final decision on mobile phasecomposition and flow rate was made on thebasis of peak shape, peak area, tailing factor,baseline drift and time required for analysis. The solvent system selected [methanol- water- orthophosphoric acid (80: 19.9: 0.1 % v/v)] gave good resolution of drug peak (Fig. 3d). No internal standard was used because no extraction or separation step was involved. Methanol-water (70:30 %v/v) did not furnish a sharp, well-defined peak (Fig. 3a). Other mobile phases tried resulted either in much lower sensitivity, delayed retention time or poor peak shapes, and so were not considered (Fig. 3).

The proposed HPLC method of analysis was also found to be precise and accurate, as depicted by the statistical data of analysis. High values of correlation coefficients and small values of intercepts validated the linearity of the calibration plots and obedience to Beer’s laws. The RSD values and the slopes and intercepts of the calibration graphs indicate the high reproducibility of the proposed method. The method was also found to be robust as there was no significant change in the peak area, peak shape and retention time of MEL.

Furthermore, the low values of LOD and LOQ indicate that the method can be employed over a wide concentration range for linearity. This method is also highly sensitive and could effectively separate the drug from its degraded product. MEL is a thiazolyl substituted benzothiazine carboxamide. Solution of MEL is stable at room temperature. The system suitability tests performed verified the resolution, column efficiency and repeatability of the chromatographic system and ensured that the equipment, electronics, and analytical operations for the samples analyzed could be constituted as an integral system that can be evaluated as a whole.

CONCLUSION: The HPLC method developed is accurate, precise, reproducible and specific. The method is linear over a wide range, economical and utilizes a mobile phase which can be easily prepared. All these factors make this method suitable for quantification of MEL in bulk drugs and in pharmaceutical dosage forms. It can therefore be concluded that use of this method can save much time and money and it can be used even in small laboratories with very high accuracy and precision. The method can also be used for the routine analysis of MEL in bulk preparations of the drug and in pharmaceutical dosage forms without any interference.

ACKNOWLEDGEMENT: The authors are thankful to Zest Pharma, Indore, India, for the gift sample of MEL.