REVIEW ON THE FIXED DOSE COMBINATION DRUGS AND THEIR INCOMPATIBILITIES

REVIEW ON THE FIXED DOSE COMBINATION DRUGS AND THEIR INCOMPATIBILITIES

ABSTRACT: Incompatibility is an undesirable reaction that occurs between drugs, excipients, or with container. This may be therapeutic, chemical and physical incompatibility. Fixed dose combination provides challenge in product development due to incompatibility of two drugs. So severe degradation of drug in presence of each other. Formulation and stability difficulties arise with incompatible combination. It involves interaction between two or more substances (drug-drug, drug-excipients, drug-excipients-drug interactions) which leads to change in colour, odour, taste, viscosity, and morphology. There are various approaches to overcome incompatibility. Among which the bilayer tablet is one of the suitable approach and increasing attention from a variety of industries for various reasons viz. Therapeutic and marketing attendance with the great physical, chemical and microbial stability. The purpose of this review is to study the physical incompatibility between fixed dose combinations, to find remedies that overcome the problems in designing formulation and to select best optimised approach to reduce incompatibility issue in fixed dose combinations.

INTRODUCTION: Incompatibility: Drug Incompatibility refers to interactions between two or more substances which lead to changes in chemical, physical, therapeutic properties of the pharmaceutical dosage form. 1 In other words, Incompatibility is an undesirable result of mixing, prescribing and / or administering together two or more antagonistic substances which may affect safety, purpose or appearance of product. 2 The undesirable results may be the consequence of the interaction between formulation ingredients of the products formed due to these interaction.

Stability problems in combination products can be attributed to three types of interaction:

occasionally, combination drugs, which may not be interacting directly, exhibit incompatibility in the presence of certain formulation components; for example, the combination of Rifampicin and Isoniazide is stable unless there is any excipient or agent that creates an acidic or alkaline environment. 3

Incompatibilities are of three types:

Definition: Interaction between two or more substances which lead to change in colour, odour, taste, viscosity and morphology.

The following list outlines the various ways by which incompatibility between or among drug agents may be manifested.

Any change in previous factors may lead to precipitation of drugs and change in their properties.

Immiscibility of two or more liquids: This manifestation appears clearly in emulsion, creams, lotions, some types of ointments.

Separation in two phases is noticed in these pharmaceutical dosage forms. The following factors lead to immiscibility:

- Unsuitable for the type of emulsion

- Others produce enzymes which oxidize the surfactant

- must be in room temperature to prevent separation

Liquefaction of solids mixed in a dry state (eutexia): It means that when two solid substances are mixed together, conversion to a liquid state take place.

It happens through the following methods:

Physical separation of the two drugs has been shown to be achieved in a number of Ways:

A] Amlodipine besylate and Benazepril hydrochloride: 4, 5

When Amlodipine and Benazepril are physically combined with each other formulation shows colour change from white to yellow colour.

B] Amlodipine and losartan:

Incompatibility: Physical When amlodipine and losartan combined with each other, amlodipine may be locked inside of the formulation due to gelation of losartan in presence of amlodipine and formulation with simple mixing of two have very poor storage stability. To avoid such problem, they must be physically separated.11

Bilayer tablet: The purpose of this dosage form was to develop a stable formulation of Antihypertensive drugs of the Telmisartan and Hydrochlorothiazide immediate release bilayer tablet and to study the dissolution profile with the reference product. The Formulation development work was initiated with wet granulation (drug layering technique) as the APIs are very static in nature and having very poor flow property. In order to improve solubility and drug release, Telmisartan is converted to its sodium salt by dissolving in aqueous solution of Sodium Hydroxide. Lactose Monohydrate and Microcrystalline Cellulose are used as diluents. Sodium Starch Glycolate is added as a superdisintegrants and Magnesium Stearate is used as the lubricant. The prepared granules are compressed into Double layer compression machine. The tablets thus formulated showed satisfactory physical parameters, and it was found to be stable and in-vitro release studies are shown that formulation (A5B5) shows Cumulative percent drug release 98.9-103.7% within 60min and matches with that of Innovator.15,16

Simvastatin is unstable in an alkaline condition while Telmisartan needs an alkaline ingredient for faster dissolution implying a monolithic tablet may be an unsuitable formulation, therefore need to separate these two active ingredient which results in low physical contact between them. 19

Bilayer tablet: A bilayer tablet comprises a first layer formulated for instant release of the angiotensin II receptor antagonist telmisartan from a dissolving tablet matrix and a second layer formulated for instant release of the HMG-CoA reductase inhibitor simvastatin from a disintegrating or eroding tablet matrix. The tablet according to the present invention provides a largely pH-independent dissolution of the poorly Water-soluble telmisartan, thereby facilitating dissolution of the drug at a physiological pH level, and adequate stability and drug release of simvastatin. The tablet structure also overcomes the stability problem caused by the incompatibility of Simvastatin with basic constituents of Telmisartan. 19, 20

Gastroretentive Bilayer Floating Tablets: The gastroretentive bilayer floating tablets of Simvastatin as controlled release and Telmisartan as immediate release. The combination therapy of Telmisartan and Simvastatin is useful in serious cardiovascular adverse effect such as hypertension, congestive heart failure and exacerbation of angina which may occur along with increasing cholesterol level in the blood, while the fixed dose combination remain the preferable choice to the patient as compared to the individual dosage form. Bi-layer tablet is suitable for sequential release of two drugs in combination, two incompatible substances and also for controlled release of drug. The bilayer tablets are prepared using different super disintegrants like Sodium Starch Glycolate, Cross Carmellose Sodium, Crosspovidone for Telmisartan immediate release and xanthan gum, guar gum and HPMC K4M for Simvastatin controlled release. Sodium Bicarbonate is used as a gas generating agent. The pre-compression parameters like angle of repose, bulk density, tapped density; compressibility index and hausner’s ratio were studied. The tablets were characterized by physical and chemical parameters such as tablet Uniformity of weight, thickness, hardness, diameter, friability, drug content, swelling index and In vitro drug release.21

Fixed dose combination of artesunate & amodiaquine hydrochloride provided challenge in product development due to incompatibility of two drugs. So severe degradation of the drugs in presence of each other. The main issue was stability of artesunate in formulation. Artesunate causes degradation due to acidic nature of amodiaquine HCL. 22, 23

Artesunate is easily degraded by heat and aqueous conditions. The key factors for Artesunate degradation have been identified in pre-formulation studies as the combination of humidity (> 1%w/w) and temperature (≥40°C) on one hand (typically tropical conditions), and the presence of Amodiaquine (or another quinoline, e.g. quinine) and/or HCl.

To prevent Artesunate degradation several strategies were tried and many proved inadequate:

The formula of amodiaquine hydrochloride was optimized using PVPK-30 as a binder. Coating parameters were optimized using factorial designs. Instamoistshield moisture barrier coating material was ready to use mixture of polymers, plasticizers, pigments, opacifiers and other excipients which could be used with organic or hydro-alcoholic systems for protection against atmospheric moisture. Result of present study suggested that stable artesunate and amodiaquine hydrochloride moisture barrier film coated bilayer tablet could be successfully formulated using calcium carbonate as basic stabilizing agent & instamoistshield as moisture barrier coating material.22

Amolodipine is unstable in alkaline exicipients due to ester bonds in the amlodipine molecule appear subject to hydrolysis when exposed to an alkaline medium. A telmisartan formulation shows acceptable in vivo performance has to comprise basic components like, for example, sodium hydroxide or meglumine, so they are incompatible with each other. 27

3) One immediate release and one sustained release layer.

In this system both the layers are of immediate release pattern.

Best Optimised Approach: From above study we come to know that bilayer tablet is the most suitable approach to avoid physical and chemical incompatibility between drugs. Bi-layer tablets can be a primary option to avoid chemical incompatibilities between APIS by physical separation, and to enable the development of different drug release profiles (immediate release with extended release). 31 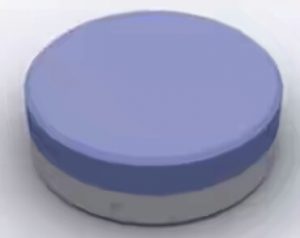 Conceptually, bilayer tablets can be seen as two single-layer tablets compressed into one. In Practice, there are some manufacturing challenges.

Delamination: Tablet falls apart when the two halves of the tablet do not bond completely. The two granulations should adhere when compressed.

a) Floating Drug Delivery System: From the formulation and technological point of view, the floating drug delivery systems are considerably easy and logical approach in the development of Gastro retentive dosage forms (GRDFs).

Approaches to design Floating Drug Delivery System: The following approaches have been used for the design of floating dosage forms of single- and multiple-unit systems.

Multiple unit type floating pills: These systems consist of sustained release pills as ‘seeds’ surrounded by double layers. The inner layer consists of effervescent agents while the outer layer is of swellable membrane layer. When the system is immersed in dissolution medium at body temperature, it sinks at once and then forms swollen pills like balloons, which float as they have lower density.

b) Polymeric Bio adhesive System: These are designed to imbibe fluid following administration such that the outer layer becomes a viscous, tacky material that adheres to the gastric mucosa/mucus layer. This should encourage gastric retention until the adhesive forces are weakened. These are prepared as one layer with immediate dosing and other layer with bio adhesive property.

Disadvantages: The success is seen in animal models with such system has not been translated to human subjects due to differences in mucous amounts, consistency between animals and humans. The system adheres to mucous not mucosa. The mucous layer in humans would appear to slough off readily, carrying any dosage form with it. Therefore, bio adhesive dosage form would not appear to offer solution for extended delivery of drug over a period of more than a few hours.

c) Swelling System: These are designed to be sufficiently small on administration so as not to make ingestion of the dosage form difficult (g., less than approximately 23 mm long and less than 11 mm wide for an oval or capsule –shaped tablet whereas 10- 12mm in diameter for round tablets). On ingestion they rapidly swell or disintegrate or unfold to a size that precludes passage through the pylorus until after drug release has progressed to a required degree. Gradual erosion of the system or its breakdown into smaller particles enables it to leave stomach. The simple bilayer tablet may contain an immediate release layer with the other layer as extended release or conventional release.31

CONCLUSION: From above review it can be concluded that there are various drug combinations which are incompatible with each other needs to be separated in formulation to minimise the degradation therefore, bilayer tablet is novel approach to overcome incompatibilities between two drugs. Bilayer tablet is improved beneficial technology to overcome the shortcoming of two incompatible drugs. Because of ease of administration, patient compliance, economic approach. Compared to all other oral dosage form it is widely accepted.