RIFAMPICIN AND ISONIAZID MICROCAPSULES FOR TREATMENT OF TUBERCULOSIS

RIFAMPICIN AND ISONIAZID MICROCAPSULES FOR TREATMENT OF TUBERCULOSIS

INTRODUCTION: Tuberculosis is one of the major communicable diseases in developing countries. Since there was a risk of development of drug resistance during treatment, multiple drug therapy of active diseases was established as a means of avoiding drug resistance, allowing shorter duration of therapy and reduced treatment failures.

Liquid dosage forms with combination of the above drugs would be a preferred option for paediatric and geriatric patients. However, the constraint in developing such formulations was the instability of Rifampicin in aqueous systems 3.

Microencapsulation process employed applying thin coat to small particles of solids or droplets of liquids and dispersions ranging from several tenth of micron to 5000 µm in size 4. It was a modified form of film coating differing only in the size of particles to be coated and the methods by which this was accomplished 5. It provided means to convert liquids to solids, separate reactive components and control the release of materials 6.

Microencapsulation had been effectively used in developing sustained release dosage forms and improving stability of drugs. Hence, attempts were made to stabilize Rifampicin in aqueous medium by microencapsulation and formulate it along with Isoniazid microcapsules in suspension formulation.

MATERIALS AND METHODS: Rifampicin and Isoniazid were a kind gift from Lyka labs ltd. Ethyl cellulose and other cellulosic polymers were obtained from Merind Pvt. Ltd. All other reagents and chemicals used in the study were of analytical grade.

Preparation of Rifampicin and Isoniazid Microcapsules by Temperature Change Method: Cyclohexane (solvent) was continuously stirred at 200-400 rpm and maintained at 55oC. Wall material ethyl cellulose was added to the above solution depending on the core: coat ratio. The temperature of the solution was then raised to 70oC for solubilisation of ethyl cellulose in the solvent and maintained over a period of one hour.

The microcapsules thus formed were then separated by decanting cyclohexane. Filtration was performed using a Buchner funnel at the vacuum pump with Whatman filter paper number 1. They were then rinsed with n-hexane and dried at 45oC for 3-4 hours. The dried microcapsules were stored in well closed containers.

Preparation of Suspensions of pure drugs/ Microcapsules: Sucrose syrup was prepared by dissolving it in 1/3rd of the water required for the suspension. Sodium metabisulphite, sodium citrate, ascorbic acid, sodium edetate, methyl paraben and propyl paraben were dissolved in water. Sodium CMC was triturated in small quantities with the syrup to give a clear uniform base. Dissolved solids along with the syrup were added to sodium CMC base.

0.2 % of Tween 80 was added to the above mixture and triturated lightly to form the suspension vehicle. Microcapsules/pure drugs were then added in small portions and mixed gently with the vehicle and final suspension was obtained by making up the volume.

o   Microscopy: Drug /microcapsules dispersed in glycerin were mounted on a microscopic slide and were observed under a 45 X objective lens. Size of 100 particles in 10 different fields was measured.

o   Sieve Analysis: 8 gms of microcapsules were weighed and placed on the uppermost sieve of a nest of sieves and were mechanically shaken by vibratory motion. The samples retained on each sieve were weighed and the weight distribution was determined.

o   Tapped Bulk Density (ρpb): Microcapsules were placed on a bulk densitometer which was set for 100 strokes. After being subjected to 100 taps, the volume of the microcapsules in the cylinder was noted as Vpb and density was determined using formula:

o   Angle of Repose: 8 gm of microcapsules were poured through a clean dry funnel clamped on a stand. Microcapsules were collected on a graph paper in the form of a pile by allowing them to fall through the funnel undisturbed. Height and radius of the pile were measured and angle of repose was calculated.

o   Flow Rate: 8 gm of microcapsules were accurately weighed and poured through a clean dry funnel clamped on a stand. The time (t) required for the microcapsules to fall through the circular orifice of the stem of the funnel was determined.

Flow rate = Weight of the microcapsules taken/‘t’ in seconds

Where µ = coefficient of friction θ = angle of repose

o   Moisture Content: One gram of microcapsules were dried at 105oC for one hour. The loss in weight was determined.

Dissolution studies of Microcapsules: 100-200 mg equivalent to 100 mg of the drug (depending on core: coat ratios) of the microcapsules and 100 mg of the pure drug were weighed. They were individually filled in hard gelatin capsules. Each capsule was placed in USP XXII dissolution apparatus and the studies were performed using 900 ml of pH 7.4 buffer at 100 rpm. Tween 80 was added into each vessel to facilitate wetting of microcapsules. 10 ml of the sample was withdrawn at regular intervals which were further diluted with pH 7.4 buffer and absorbance was measured at 334 nm and 263 nm for Rifampicin and Isoniazid respectively using U.V spectrophotometer.

Drug Content: Since both the drugs were present in combination in the suspension, the amount of each drug retained in suspension was determined by simultaneous equation method. The absorbance of standard solutions of Rifampicin and Isoniazid was measured at both the wavelengths i.e., 263 and 334 nm.

The concentration of Rifampicin in test solution in ug/ml was given by the following equation:

Similarly, the concentration of Isoniazid in test solution in ug/ml was given by the following equation:

Stability Studies: Stability studies were carried out for the pure drugs, suspension of pure drugs and suspension of microcapsules. The studies were performed by placing representative samples of each formulation in well closed containers at different temperatures of 12oC, 25oC, 45oC and 60oC as per ICH guidelines. Microcapsules were evaluated for change in appearance, pH and viscosity in case of suspensions and drug content. Log % retained vs. time (days) was plotted for different temperatures. The K value thus obtained was used in Arrhenius plot wherein log K was plotted vs. 1/T. The shelf life (T10%) was thus obtained by extrapolating the K value for room temperature.

RESULTS AND DISCUSSION: Rifampicin was reported to be unstable in aqueous medium. Hence, in order to improve its stability, it was attempted to microencapsulate it using cellulosic polymers. Since Rifampicin and Isoniazid in combination were given as the most effective treatment for tuberculosis, it was decided to prepare a suspension formulation utilizing the microcapsules of individual drugs, especially for paediatric patients. Batch formulas for Rifampicin and Isoniazid microcapsules are as given in table 1.

Temperature change method along with Ethyl cellulose was used to induce phase separation coacervation 9. This method utilized the fact that ethyl cellulose was insoluble in cold Cyclohexane but dissolved completely in Cyclohexane at 70-75oC. Microcapsules obtained by temperature change method were found to be fine, non-staining, granular and free flowing with % yield values between 98-100%.

Evaluation of Rifampicin and Isoniazid microcapsules as compared to pure drugs were given in table 2 and table 3. A considerable change in physical properties of the drugs was observed after microencapsulation. Rifampicin which was a brick red coloured staining drug, was found to be non staining and easier to handle after microencapsulation.  Isoniazid, an off white coloured powder was transformed into irregular free flowing particles.

For particles size distribution determination, both the drugs were individually sieved through 120 mesh sieve, hence all the drug particles were below 125 µm. Also, the microcapsules obtained were of wide range due to the irregularity of the particles which were originally used. It was also due to the aggregation of particles during microencapsulation that a wide particle size distribution was observed. Lumps were observed to an extent of 0.3-6% of the total yield. Both the drugs exhibited improved flow properties upon micro-encapsulation. This property of microcapsules was found to be maintained even after three months of storage.

Ethyl cellulose formed a film around the particles and prevented the development of excess charges, thereby making the material free flowing. It was also seen that there was a decrease in angle of repose with an increase in proportion of ethyl cellulose in the microcapsules. Bulk density of both the drugs was found to be reduced after microencapsulation. Lower density thus resulted in lighter microcapsules thereby facilitating suspendability.

Moisture content for microcapsules was reduced as compared to pure drugs suggesting improvement in stability. Individual values for drug content were close to the theoretical value indicating reproducibility of the microencapsulation technique. Ethyl cellulose content was found to be in the range equal to theoretical percentage and thus indicates reproducibility of the procedure. Photomicrographs of the pure drugs in comparison with microcapsules exhibited irregular shaped microcapsules (Figures 1-4). 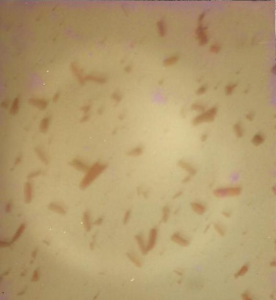 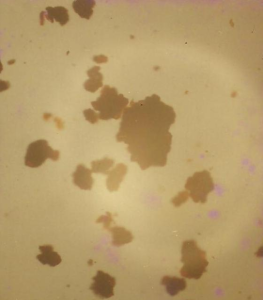 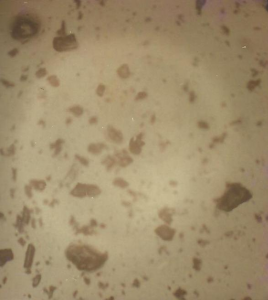 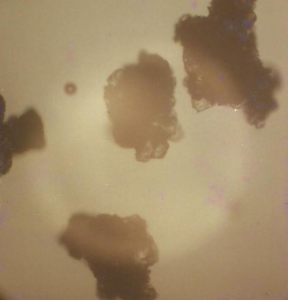 Dissolution studies of the drugs and microcapsules were carried out in pH 7.4 phosphate buffer and graph of % drug released vs. time was plotted.

Rifampicin in pure form was found to release 90% of the drug in 1.16 hours as indicated by figure 5.  On microencapsulation, T90% was found to be increased upto 4.79 hours indicating considerable retardation in rate of dissolution. Similarly, for Isoniazid, T90% was increased from 0.82 hours to 3.11 hours for microcapsules as compared to pure drug. Both the drugs were observed to follow a first order release pattern (table 4).

Suspension formulation was prepared and the basic ingredients were chosen based on their compatibility with Rifampicin and Isoniazid. The results of suspension evaluation were as represented in table 5.

However, only a marginal increase in Rifampicin stability was observed in aqueous suspension after microencapsulation as compared to Isoniazid.  Hence, microencapsulation resulted in improving the stability and prolonging the release of drugs which possessed a potential in formulation of liquid dosage forms for paediatric and geriatric use.