Myocardial Injury due to IRI results in cardiac contractile dysfunction, arrhythmias, and irreversible myocytes damage.4 Several studies have demonstrated that obese patients are twice as likely to die of ischemic heart disease compared to normal weight patients 5, 6, as obesity might alter myocardial metabolism leading to compromised cardiac function and tolerance to ischemia.7

Since thrombin plays a role in myocardial damage and impaired hemodynamic recovery during IRI; considerable attentions had been directed to study the effect of new therapeutic interventions that reduce thrombin synthesis. Inhibiting factor Xa, which is an essential enzyme in thrombin synthesis pathway, may be a useful tool in the management of myocardial IRI.8

Rivaroxaban is a direct factor Xa inhibitor used orally for prevention and treatment of thromboembolic disorders 9, it had potent antithrombotic effects by inhibiting thrombin generation through the inhibition of factor Xa generated via either the intrinsic or the extrinsic coagulation pathways.10 However, little is known about its effect in decreasing the complications that might be associated with the reperfusion of ischemic heart. Therefore, the present study was designed to show the effect of Rivaroxaban pretreatment, a new factor Xa inhibitor in a rat model of obesity and myocardial IRI. R- hirudin, anticoagulant drug known to inhibit thrombin was used in this study as a positive control.

Male wistar albino rats (n=80), weighing 150±10g, were purchased from The Egyptian Organization for Biological Products and Vaccines, Cairo, Egypt. The rats were housed in stainless steel wire-bottomed cages. The rats were exposed to 12 hours light/dark cycle in the animal care facility at Faculty of Pharmacy, Zagazig University, Egypt. The room temperature was maintained automatically at 25 °C ± 2°C and humidity at 65% to 69%. The rats were fed rodent chow and allowed free access to drinking water. All the experimental procedures were conducted in accordance with the guidelines of the National Institutes of Health for animal research. The experimental protocol was approved by the Institutional Laboratory Animal Care and Use Committee of Faculty of Pharmacy, Zagazig University, Egypt. Every effort was made to reduce the number of animals and their suffering.

In order to induce obesity, 70 rats were randomly chosen to switch their diet to high fat diet for the next four months.11 The rats which showed ≥ 30% increase in their body weight were considered obese and used for this study.

Development of myocardial IRI in the rats: Rats (control and obese) were anesthetized with pentobarbital (35mg/kg body weight, I.P) (NembutalR, Dainippon-Sumitomo Pharmaceutical Co., Ltd., Osaka, Japan).12 First an incision was made at midline skin. This followed by left thoracotomy to reach the heart in 4th intercostal space. 6-0 10 mm prolen suture with a traumatic needle was placed around the left anterior descending artery (LAD). The threads of the suture were tightened to obtain a complete occlusion to develop ischemia for 30 minutes. Then the snare was loosened to obtain reperfusion. The rats were connected to a ventilator for one hour with reperfusion.13After one hour reperfusion; rats were sacrificed by spinal dislocation for serum and tissue collection.

The obese and control animals were subjected to IRI. The obese animals were treated with r-Hirudin or Rivaroxaban. That results in four experimental models as explained below (n=6):

Control IRI rats: In which control rats were subjected to IRI.

Obese IRI rats: In which obese rats were subjected to IRI.

The rats were sacrificed by spinal dislocation and the blood samples were collected. The blood samples were then centrifuged at 4500rpm for 20 minutes for serum separation. The serum was freshly used for the determination of CK-MB activity using commercially available kits (Spectrum diagnostics, Germany).

The rats were sacrificed and the hearts were collected for histopathological analysis. The hearts were kept in 4% paraformaldhyde. The hearts were then dehydrated with a series of ascending grade ethanol from 75 to 100%. The hearts were then placed in xylol and embedded in paraffin. Cross sections of about 4µm thickness were prepared and placed on slides. The slides were stained with hematoxylin and eosin stain to study the histological structure of heart.16

Determination of cardiac Angiotensin II, TNF-α and IL-8 contents: The rats were sacrificed and the hearts were excised instantly, rinsed with cold normal saline and quickly frozen in liquid nitrogen for 5 minutes and then stored at -20ºC. Angiotensin II, TNF-α and IL-8 contents were measured with a commercial ELISA kits (Cusabio Biotech Co., Ltd, China) following the instructions of the manufacturer protocols.

Reverse transcriptase-PCR procedure: The extracted RNA was converted into cDNA and amplified by PCR using real-time polymerase chain reaction (RT-PCR) kit (Stratagene, USA). 3μl of random primers was added to the 10 μl of RNA, which was denatured for 5min at 95°C in a thermal cycler (Robocycler, USA). The RNA primer mixture was cooled to 4°C. Then cDNA master mix was prepared according to the kit instructions and was added to each sample. The mixture was incubated in a programmed thermal cycler for 1h at 37°C followed by inactivation of the enzyme at 95°C for 10min and cooled at 4°C. The sequence of the primers used is listed in Table 1. GAPDH was used as a house-keeping gene

Determination of CK-MB activity in the serum:

As shown in Fig. 3, pre-treatment either with rivaroxaban or r- hirudin  caused significantly reduce the infarct size (p<0.05) by 33.25 % and 45.22 % respectively, when compared with obese rats subjected to IRI at 65.65 %. However there was a non significant difference between rivaroxaban and r- hirudin pretreated rats. 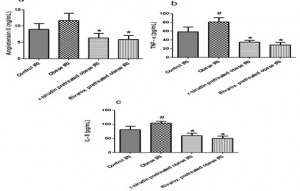 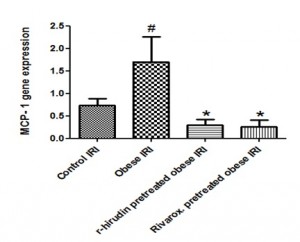 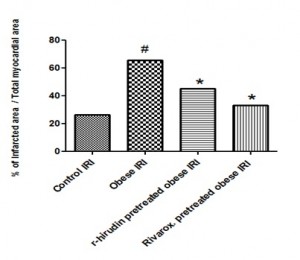 FIG.3: EFFECT OF RIVAROXABAN AND r- HIRUDIN PRETREATMENT ON PERCENTAGE OF MYOCARDIAL INFARCT SIZE IN RATS SUBJECTED TO IRI. 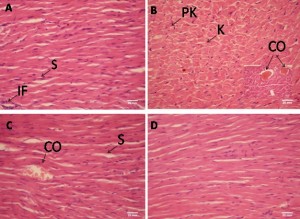 FIG.4: HAEMATOXYLIN AND EOSIN STAINED SECTIONS OF THE EXPERIMENTAL RATS. OBESE IRI RATS SHOWED A MARKED KERATOLYSIS, NEUTROPHIL INFILTRATION AND CONGESTION, IN ADDITION TO THE LOSS OF THE NORMAL CARDIAC STRIATIONS OF THE MYOCYTES. AN INCREASE IN THE NUMBER OF THE APOPTOTIC CELLS, WITH SMALL PKYNOTIC NUCLEI WAS NOTICED. PRE-TREATMENT WITH r-HIRUDIN PRESERVED THE NORMAL CARDIAC STRIATIONS WITH A REDUCTION IN THE NUMBER OF PKYNOTIC CELLS BUT SOME SEPARATION AND CONGESTION IN THE CARDIAC MUSCLE FIBERS WERE OBSERVED. PRE-TREATMENT WITH RIVAROXABAN SHOWED A SIGNIFICANT REDUCTION IN THE NUMBER OF PKYNOTIC CELLS, CONGESTION, NEUTROPHILS INFILTRATION AND CARDIAC MUSCLE SEPARATION COMPARED WITH OBESE IRI RATS.

DISCUSSION: Reperfusion of the ischemic myocardium is accompanied by an inflammatory response that results from the actions of certain cytokines (e.g. TNF- α, IL-8) and chemokines (e.g.MCP-1) in addition to the action of Angiotensin II and the increased expression of adhesion molecules on cardiomyocytes.19

Previous study stated that cytokines enhance thrombin formation20, thrombin in turn stimulates PAR-1 receptors which are found on endothelial cells, fibroblasts, T-lymphocytes and smooth muscle cells to express MCP-1 and adhesion molecules, such as intercellular adhesion molecule–1 (ICAM–1) and P-selectin to the site of injury in addition to the stimulation of IL-6 and IL-8 production from monocytes, which constitute more

In the present study, cardiac IRI caused an elevation in tissue Angiotensin II by stimulating cardiac mast cells which are an important source of the aspartyl protease rennin to release rennin that initiates the activation of a local renin-angiotensin system.26, 27 Additionally acute myocardial ischemia reperfusion results in a prolonged autocrine upregulation of TNF- α formation and release from the heart 28, which in turn increased the upregulation of MCP-1.29 Myocardial IL-8 level was also markedly increased in the reperfused myocardium.30 All that resulted in increasing thrombin formation that developed myocardial necrosis and tissue damage. This can be indicated here by increased CK-MB activity and infract size. These findings were in line with previous studies which stated the release of cytokines as TNF-α during myocardial infarction, mediated progressive impairment in cardiac structure and increased the permeability of the injured myocytes membrane. That was accompanied with an elevation in CK-MB activity.30, 31, 32

Many studies suggested a significant role of thrombin in myocardial IRI through a proinflammatory mechanism independent of coagulation and thrombus formation.8, 33 Thrombin had significant pro-inflammatory effects on endothelial cells which result in the expression of several adhesion molecules and inflammatory cytokines and chemokines. Thrombin also stimulates the generation of reactive oxygen species by smooth muscle cells.34 Additionally many of the thrombin pro inflammatory effects had implications on the promotion of atherosclerosis .35

Inhibition of thrombin or decreasing its synthesis resulted in a useful strategy to ameliorate the consequences of IRI.8, 23 That was proven in this study as pretreatment with rivaroxaban, factor Xa inhibitor, showed a significant improvement in myocardial IRI. That was manifested by a significant decrease in the myocardial Angiotensin II, TNF α, IL-8 levels as well as mRNA expression of MCP-1 and percentage of infarct size.

Additionally a significant decrease in the serum CK-MB activity was observed in obese IRI rats pretreated with rivaroxaban compared to obese IRI.

The histological examination confirmed our findings, as shown in (Fig.5). Obese rats subjected to IRI showed a marked increase in keratolysis of the cardiac muscles cells that might be a result of ischaemia in addition to neutrophils infiltration and congestion. The normal cardiac striations were lost accompanied by reduction in the pumping capacity of the heart. An increase in the number of the apoptotic cells, with small pkynotic nuclei was also noticed. Pre-treatment with r- hirudin drug, preserved to some extent the normal cardiac striations with a reduction in the number of pkynotic cells. However, some separation in the cardiac muscle fibers and congestion were observed in r- hirudin pretreated. The pre-treatment with rivaroxaban showed a great reduction in the number of pkynotic cells, congestion and neutrophils infiltration, in addition to restoring the normal cardiac muscle striations.

CONCLUSION: Our results indicated a beneficial role for rivaroxaban as a protective agent against consequences of myocardial IRI through inhibiting thrombin synthesis and reducing its pro-inflammatory effects.

ACKNOWLEDGMENTS: We would like to thank EDITX LLC for proof reading and editing the manuscript.

FUNDING: The author(s) received no financial support for the research, authorship, and/or publication of this article.