ABSTRACTPseudomonas aeruginosa, is one among the few drug resistant organisms causing Urinary Tract Infection. Most strains of Pseudomonas aeruginosa are significantly more resistant, even in the absence of R plasmids, to many antimicrobial agents, including β-lactams, tetracycline, chloramphenicol, and fluoroquinolones, than most other gram-negative rods. This broad-range resistance has so far been assumed to be mainly due to the low permeability of the P. aeruginosa outer membrane. Mex-proteins are the multidrug exporter proteins that are significant in drug ejection, which is the main reason for drug resistance. This limits the therapeutic options. Inhibition of multi drug resistant efflux pumps can restore the activities of antimicrobial agents that are substrates for these proteins. Hence efforts are now taken to screen few medicinal plants, which are both economic and less toxic. Among the several plants screened, we have chosen the acetone extract of Elephantopus scaber from which we purified a new terpenoid for our study. Its structure was generated using CHEMSKETCH software. The novel terpenoid was evaluated as potent efflux inhibitor. In this present study the Mex A protein and terpenoid were docked using Auto dock software and the docking score with minimum binding energy value of -6.82kcal/mol was calculated. It infers that the terpenoid can inhibit the activity of Mex A by forming a strong atomic interaction with the active site residues. Hence the terpenoid can act as a drug for bacterial infections. This study on inhibition of efflux pump using terpenoid would be an alternate but effective solution to combat drug resistant Pseudomonas infections without side effects

INTRODUCTION:Urinary tract infection (UTI) is the second most common infectious presentation in community practice. Worldwide, about 150 million people are diagnosed with UTI each year, costing the global economy in excess of 6 billion US dollars (Roos et al., 2006). UTI may involve only the lower urinary tract or may involve both the upper and lower tract. The term cystitis has been used to describe lower UTI, which is characterized by a syndrome involving dysuria, frequency, urgency and occasionally suprapubic tenderness. The extensive uses of antimicrobial agents have invariably resulted in the development of antibiotic resistance, which, in recent years, has become a major problem worldwide (Kumar et al., 2006). The emergence of antibiotic resistance (Kiffer et al., 2007) among both pathogenic and opportunistic microbes resident in hospitals represents a serious and recurrent problem for the treatment of infections (Akram et al., 2007). Among the several drug resistant bacteria in UTI, Pseudomonas aeruginosa pose a greater problem because of their resistance to to many antimicrobial agents, including β-lactams, tetracycline, chloramphenicol, and fluoroquinolones. Treatment of infections caused by these resistant bacteria has become very difficult, since they are resistant to many antibiotics. This limits therapeutic options (Supriya Tankhiwale et al., 2004). Therefore, alternative methods of treatment are sought after. The clinical efficacy of many existing antibiotics is being threatened by the emergence of multidrug-resistant pathogens (Bandow et al., 2003).

Many infectious diseases have been known to be treated with herbal remedies throughout the history of mankind. Natural products, either as pure compounds or as standardized plant extracts, provide unlimited opportunities for new drug leads because of the unmatched availability of chemical diversity. There is a continuous and urgent need to discover new antimicrobial compounds with diverse chemical structures and novel mechanisms of action for new and re-emerging infectious diseases (Rojas et al., 2003). There is an increasing failure of chemotherapeutics and antibiotic resistance exhibited by pathogenic microbial infectious agents. Therefore, researchers are increasingly turning their attention to folk medicine, looking for new leads to develop better drugs against microbial infections (Heinrich, 2000). This has led to the screening of several medicinal plants for their potential antimicrobial activity (Hess et al., 1995; Simeos et al., 1999; Chattopadhay et al., 2002; Rojas et al., 2003; Cruz et al., 2007; Mbwambo et al., 2007).

Plants have an almost limitless ability to synthesize aromatic substances, most of which are phenols or their oxygen-substituted derivatives (Geissman, 1963). Most are secondary metabolites, of which at least 12,000 have been isolated, a number estimated to be less than 10% of the total (Schultes, 1978). Among the several plants screened, Elephantopus scaber (E.scaber), a member of the family Asteraceae known for its medicinal properties was also reported to possess antidiabetic and antibacterial activity (Avani, KS Neeta,2005). A new terpenoid was isolated from the acetone extract of E.scaber already reported to have significant anti-bacterial activity against a few multi drug –resistant ESBL producing clinical isolates (Jasmine et al.,2007), but the mechanism of action was not clearly understood. Hence, to overcome this we tried in nonconventional methods of drug designing by the use of Bioinformatics approaches.   Keeping rational drug designing in mind we made an effort to design natural drug for Urinary tract infection caused by drug resistant Pseudomonas sp. using a novel terpenoid compound isolated from E.scaber by docking against Mex A.

MATERIALS AND METHODS: The dried and powdered E.scaber plant was used to prepare acetone extract which was then subjected to fractionation on silica gel. The most bioactive fraction obtained from acetone extract of E.scaber was selected for preliminary phytochemical screening. Test for alkaloids, steroids, flavanoids, Terpenoids and proteins were carried out according to the standard methods (Harborne JB ,1973). A new Terpenoid was purified for the study. The anti-bacterial activity of the Terpenoid was evaluated by the disc diffusion method (Bauer AW, 1996).

The Minimal Inhibitory Concentration (MIC) and Minimal Bactericidal Concentration (MBC) were determined for the Terpenoid by broth dilution method (Ayafor JF, 1994). Various bioinformatics softwares like Pass Prediction, ChemSketch and Auto docking were used for the study. Based on the literature, the Mex proteins were found to be the multidrug exporter proteins that are significant in drug ejection in Pseudomonas sp. The crystal structure of Mex A protein which is of multidrug resistant compound with its PDB ID 1T5E was retrieved from RCSB Protein Data Bank. This structure consists of chains from A to M.

In these Docking studies, we obtained A chain and the active site is predicted via Pass Prediction Tool. By the help of chemsketch software, we have generated the 3D structure of the molecule. The docking analysis of terpenoid with target protein was carried by Auto docking software. To study the interaction, here we have used Swiss pdb viewer. Deep View - Swiss-PdbViewer is an application that provides a user friendly interface allowing analyzing several proteins at the same time. H-bonds, angles and distances between atoms are easy to obtain.

RESULTS: The MEX A protein interacts with the Terpenoid ligand  and Fig. 4 depicts the structure binding sites of the Mex A protein and Fig. 5 shows the structure of the protein-ligand complex.The NMR study result of the Terpenoid (2D structure) is given in Fig. 2 and its 3D structure was predicted using the ChemSketch Software and the result is given in Fig. 3. Table 1 explains the predicted properties of Terpenoid. Table 2 showing the docking result explains the atoms involved in protein-ligand interaction, calculated Bond length and the positions of amino acid of the active site. The binding energy value for the protein-ligand complex was calculated and was -6.32kcal/mol . The calculated docking results are given. 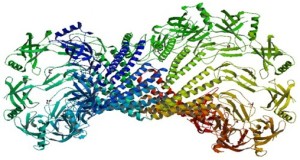 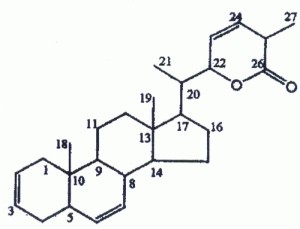 FIGURE 2: THE NMR STUDY RESULT OF THE TERPENOID (2D STRUCTURE) 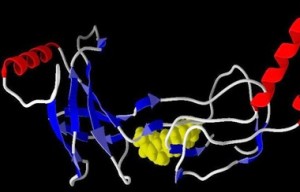 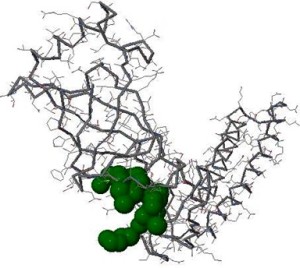 DISCUSSION: Though, there are a few anti-Pseudomonal drugs in the pipeline (Page MG, Heim J,2009), there is an urgent need for novel and effective infection control strategy to face this highly critical therapeutic challenge of drug resistance  (Brown PD, Izundu A ,2004; Kipnis E, 2006). Since long, bioactive compounds from natural sources have shown the potential to inhibit resistance mechanisms (Gibbons S,2008). The docking studies were performed for the Mex A protein and the terpenoid molecule. From the results, the binding energy of terpenoid with MexA was found to be -6.82Kcal/mol and it formed a single hydrogen bond with the active site residue Gly 168. The inhibitory concentration was found to be 10μ m. these results are very similar to the protein ligand complex in which the binding energy was found to be -6.32 Kcal/mol and a single hydrogen bond formed at Gly 168.

Hence, terpenoid  was found to inhibit MexA effectively. MexA protein comprises of the efflux pump in Pseudomonas ,where the efflux is responsible for removing the drug (David M Livermoore, 2004). Component of the mexAB-oprM multidrug efflux complex composed of an unknown number of MexA subunits, MexB and an OprM homotrimer. The MexA subunits are thought to form a barrel between the mexB inner membrane transporter and the trimeric oprM outer membrane channel protein. The N-terminus of the mexA subunits are anchored to the inner membrane while the alpha-helices of each subunit are hypothesized to form the barrel which would allow substrates to pass directly from the cytoplasm/inner membrane to the external mileu.

Hence, the idea of the terpenoid inhibiting the activity of  MexA is considered to be a milestone, where the efflux can become inoperable. Other reports on phytochemicals acting against Pseudomonas are available. The results show that the combinations of sulfamethoxazole plus protocatechuic acid, sulfametho xazole plus ellagic acid and sulfametho- xazole plus gallic acid have synergistic mode of interactions for all the strains of P. aeruginosa under investigation. It was also observed that the antifolate drug, sulfamethoxazole is synergistic with myricetin in three strains (PA01, DB5218 and DR3062) and additive for two strains (ATCC and PT121) of P. aeruginosa (Bos MP, Tommassen J,2004).

Polymyxin B is reported to have a detergent like mechanism of action and interacts with lipoplysaccharide (LPS) of the outer membrane of P. aeruginosa (Evans ME,1999;  Hancock REW,1997). The present study clearly highlights the low toxic potential of phytochemicals as antibacterial compounds and suggest on the possibility of use of the above shown phytochemical for combating infections caused by this pathogen.  Hence we conclude from our docking study that, the novel terpenoid isolated from E.scaber possesses antibacterial activity against multi drug resistant P. aeruginosa by inhibiting the Mex A protein.