ROLE OF ADHESIVES IN TRANSDERMAL DRUG DELIVERY: A REVIEW

ROLE OF ADHESIVES IN TRANSDERMAL DRUG DELIVERY: A REVIEW

Transdermal drug delivery systems (TDDS) also commonly known as “patches” are dosage forms designed to deliver a therapeutically effective amount of drug across a patient’s skin. The therapeutic performance of a transdermal delivery system (TDS) can be affected by the quality of contact between the patch and the skin. The adhesion of the TDS to the skin is obtained by using pressure-sensitive adhesives (PSAs), which are defined as adhesives capable of bonding to surfaces with the application of light pressure. This article provides an overview of types of transdermal, the anatomical considerations and role of adhesion, the possible adhesion failure modes and how adhesion can be measured. Several in vitro techniques have been used to monitor adhesive performance such as peel adhesion, tack and shear strength. This article provides a frame work for further discussion and scientific work to improve transdermal adhesive performance.

INTRODUCTION: Transdermal patches are innovative drug delivery systems intended for skin application to achieve a systemic effect. Among the different types of systems, the drug-in-adhesive products-in which the drug is included in the adhesive layer contacting the skin- are commonly used. They also have the advantage of being thin and comfortable to wear. A transdermal patch is a medicated adhesive patch that is placed on the skin to deliver the  medication through the skin to treat systemic conditions.The adhesive of the TDDS is critical to the safety, efficacy and quality of the product. To begin with, the therapeutic effect of the drug is linked to the adhesive performance of the TDDS. Reduction in the surface area of contact as a result of patch lift, or even the patch falling off, diminishes the delivery of drug from the patch. In other words, poor adhesion results in improper dosing of patients. Secondly, patches that fail to adhere for their prescribed time period must be

Approaches to the development of transdermal therapeutic systems 5,6,7:

Polymer membrane permeation-controlled TDDS: In this system, the drug reservoir is embedded between an impervious backing layer and a rate controlling membrane. The drug releases only through the rate controlling membrane, which can be micro porous or non-porous. In the drug reservoir compartment, the drug can be in the form of a solution, suspension, or gel or dispersed in solid polymer matrix. On the outer surface of the polymeric membrane a thin layer of drug-compatible, hypoallergenic adhesive polymer can be applied. The rate of drug release from this type of transdermal drug delivery system can be tailored by varying the polymer composition, permeability coefficient and thickness of the rate controlling membrane (Figure 1).

Adhesive Diffusion Controlled TDDS: The drug reservoir is formed by dispersing the drug in an adhesive polymer and then spreading the medicated polymer adhesive by solvent casting or by melting the adhesive (in case of hot-melt adhesives) onto an impervious backing layer. The drug reservoir layer is then covered by a non-medicated rate controlling adhesive polymer of constant thickness to produce an adhesive diffusion controlling drug delivery system (Figure 2).

Matrix Diffusion Controlled TDDS: The drug is dispersed homogeneously in a hydrophilic or lipophilic polymer matrix. This drug containing polymer disk is then fixed onto an occlusive base plate in a compartment fabricated from a drug-impermeable backing layer. Instead of applying the adhesive on the face of the drug reservoir, it is spread along the circumference to form a strip of adhesive rim (Figure 3).

Micro Reservoir Controlled TDDS: This drug delivery system is a combination of reservoir and matrix-dispersion systems. The drug reservoir is formed by first suspending the drug in an aqueous solution of water-soluble polymer and then dispersing the solution homogeneously in a lipophilic polymer to form thousands of unleachable, microscopic spheres of drug reservoirs. The thermodynamically unstable dispersion is stabilized quickly by immediately cross linking the polymer in situ. A transdermal therapeutic system is thus formed as a medicated disc positioned at the centre and surrounded by an adhesive rim (Figure 4).

Role of adhesion in Drug Delivery: Adhesion or the lack of adhesion of transdermal systems to the skin is a critical factor directly related to drug delivery and therapeutic effect. Since the drug absorption process is related to the drug partitioning between the TDDS and the skin and the drug permeation process, complete skin contact over the entire delivery surface for the entire labelled application period is essential 8, 9. For an adhesive to adhere to a substrate, a fundamental thermodynamic requirement has to be satisfied: the measured surface energy of the adhesive must be equal to or less than that of the adherend(e.g. human skin) 10.

Pressure Sensitive Adhesives (PSA): A PSA is a material that helps in maintaining an intimate contact between transdermal system and the skin surface. It should adhere with not more than applied finger pressure, be aggressively and suitably tacky, and exert a strong holding force. Additionally, it should be removable from the smooth surface without leaving a residue. Polyacrylates, polyisobutylene and silicon based adhesives are widely used PSAs in TDDSs 11, 12, 13.

Modes of failure in TDDS: 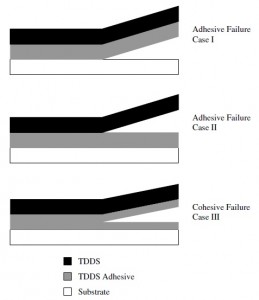 FIGURE 5: MODES OF FAILURE IN TDDS 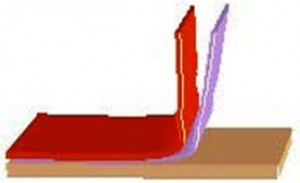 Shear strength properties or creep resistance: Shear strength is the measurement of the cohesive strength of an adhesive polymer i.e., device should not slip on application determined by measuring the time it takes to pull an adhesive coated tape off a stainless plate. Minghetti et al., (2003) performed the test with an apparatus which was fabricated according to PSTC-7 (pressure sensitive tape council) specification 16 (Figure 9).

In vivo studies: Skin is a variable material, and the test panels and probes used for testing adhesion properties are poor models of skin. The lack of in vivo/in vitro correlation may be attributed to the differences in the surface energy between the TDDS and skin versus the TDDS and a stainless steel test panel. The surface energy of clean skin (27 dyn/cm) is lower than those of stainless steel (500 dyn/cm), polyethylene (31dyn/cm), polymethacrylate (39dyn/cm) and polystyrene (33dyn/ cm) 17.

In addition, the test panels and probes used for in vitro testing do not take into account different skin types, skin oils, motion and changing moisture levels. Skin is rough while stainless steel is smooth, and skin is flexible while stainless steel is stiff. When a TDDS is removed from the skin, considerable skin deformation can be seen as a result of its extension 18.

Therefore, when a peel test is performed using the skin as a substrate, the work expended in the TDDS detachment includes the deformation of the skin itself as well as separation of the TDDS from the surface 19, 20. There is a lack of evidence for a relationship between the results obtained in in vitro adhesion tests and the in vivo adhesion performance of TDDS 21 .The in vitro conditions do not necessarily represent the performance of the TDDS under in vivo conditions. Skin is subject to moisture either internal (perspiration) or external (washing),conditions that are difficult to duplicate for in vitro testing 22, 23.

In addition, in vivo moisture conditions are greatly influenced by environmental factors such as heat, humidity and exercise. Changes to these factors may be caused by common activities such as bathing, showering, sunbathing, sauna, whirlpool, dressing, light exercise, strenuous exercise that produces a heavy sweat and swimming 24.

It should not be unreasonable to expect a TDDS to adhere for the label application period. Also, it should not be unreasonable to expect a TDDS with a label application period of 3 or more days to adhere during showering or bathing. Currently, in vivo adhesion performance is usually based upon subjective observations. The performance may be estimated by a scoring system based on patch lift. Adhesion to skin is scored from 0 to 4, in which 0 indicates that the patch did not lift and 4 indicates that the patch fell of the skin. The condition of the skin before application of the TDDS is usually not stated 25, 26, 27.

TDDS are a novel dosage form which relies on good adhesion over a period of many hours or days to ensure proper drug delivery. Skin adhesion is one of the most important functional properties for a TDDS. Poor adhesion results in improper dosing of patients and potential accidental dosing of children who may pick up fallen patches. Consistent methodology to test the adhesion properties of TDDS and ensure their safety does not exist. Although in vivo human skin testing is the most reliable method for evaluation of TDDS, the time, safety and money involved in human trials prohibit the extensive use of in vivo testing methods.

Therefore, it is important to develop in vitro adhesion testing methodology. It is desirable that the outcome of an in vitro adhesion test correlates with in vivo skin adhesion. To keep health care costs manageable, methods also need to be adequate to compare the adhesion properties of a generic transdermal drug delivery system to the adhesion properties of an innovator transdermal drug delivery system. The adhesion of a TDDS needs to be part of the upfront design of the product. Once adhesion becomes an important design parameter and suitable methods are available and understood, the FDA should see a decrease in ‘‘adhesion lacking’’ reports. Until then, a scientific work in this area needs to continue.

ACKNOWLEDGEMENTS: The authors express their gratitude to the Management, Principal, Dean and Faculty members of Krupanidhi College of Pharmacy, for their encouragement, support, and guidance for this work.