ABSTRACT: Japanese encephalitis is the most common arthropod-borne human encephalitis in the world. JEV clinical outcomes vary from complete recovery to recovery with neuropsychiatric sequelae to death. Contribution of T cells to the control and immunopathology of JEV infection has been reported in various studies. CD4+ T cells were found to be major T cells that has role in protection as well as affecting the clinical outcome in murine Japanese encephalitis model. Role of the CD4+ T cells subset in determining outcome of JEV infection is incompletely understood. Therefore, we sought to determine how quantitative difference in CD4+ T cell subsets influences JEV infection outcome. A total of 544 Acute Encephalitis Syndrome (AES) cases were admitted in ICU and AES ward of Kushinagar District Hospital during a period from Aug 2013 to Dec 2015. A diagnosis of JEV infection was based on clinical symptoms and anti-JEV IgM antibody in the acute phase cerebrospinal fluid (CSF) and serum samples measured by IgM antibody capture (MAC)-ELISA. Blood samples were drawn, and flow cytometry analysis was performed. The outcome was recorded as death, recovered, recovered with sequelae. Percentage of T cell subset CD3+ T cells, CD4+ IFNγ+ (Th1), CD4+ IL-4+ (Th2), CD4+ IL-17+ (Th17) and CD4+CD25high+Foxp3+ T reg cells were analyzed and compared between patients with different outcome. CD4+ Th1 percentage was found to be significantly in recovered patients when compared to other disease groups. A positive correlation was observed between GCS and Tregs cells (r=0.34 P=0.002). We conclude that CD4Th1 might be associated with recovery after JE infection. Treg cells expansion during JEV infection may lead to improvement in neurological manifestation.

INTRODUCTION: Japanese encephalitis virus (JEV) is a small, enveloped, plus-strand RNA virus belonging to the family Flaviviridae and is the leading cause of viral encephalitis mostly in children of age <15 years, resulting in around 68,000 cases in Asia.

Case fatality is found to be 20-30% of those affected, and 30-50% of the survivors have long-lasting neuropsychiatric sequelae 1.

Most JEV infections are sub-clinical; only 1:250 to 1:1000 infected persons develop clinical presentations of acute encephalitis syndrome which may vary but include a headache, fever, a change in mental status (including symptoms such as confusion, disorientation, coma or inability to talk) and new onset of seizures, tremors, paresis (generalized) hypertonia and loss of coordination 2. While JEV infects and kills neurons directly in the central nervous system (CNS), CNS invasion of JEV causes the stimulation of microglia/glia and infiltrated leukocytes, leading to indirect neuronal killing via over secreting pro-inflammatory cytokines (such as IL-6 and TNF-α) and soluble mediators that can induce neuronal death. This notion implies that JE is an immunopathological disease caused by uncontrolled over activation of innate and adaptive immune cells, resulting in neurological disorders in the CNS. Therefore, excessive or inappropriate CNS infiltration and activation of peripheral leukocytes during JE can cause profound damage. Therefore, balanced CNS infiltration and activation of peripheral leukocytes should be achieved to have a favorable prognosis of JE without tissue injury 3.

JEV clinical outcomes vary from complete recovery to recovery with neuropsychiatric sequelae to death. Production and trafficking of immune T cells potentially contribute to both recovery and immunopathogenesis 4. The role of the immune response to JEV in determining the outcome of infection is incompletely understood. Earlier studies show that increased protection was observed when JEV-primed isolated CD4+ T cells were transferred compared with isolated CD8+ T cells 5 moreover CD8+ T cells response does not markedly affect the outcome of the infection in a murine model of Japanese encephalitis 6. Therefore, we sought to determine whether JEV infection outcomes can be determined by quantitative differences in peripheral CD4+ T cells.

Selection of Subjects during JE Infection Study: A total of 544 AES cases were admitted in ICU and AES ward of Kushinagar District hospital during a period from Aug 2013 to Dec 2015. These cases were investigated as per WHO case definition of AES. Clinically a case of AES is defined as fever or recent history of fever with a change in mental status (including confusion, disorientation, coma, or inability to talk) and new onset of seizures (excluding simple febrile seizures). Detailed history, physical examination, and relevant investigations were done by authorized medical practitioners. Glasgow coma scale (GCS), a scoring system based on the clinical status of patients was recorded by Medical practitioner and was used as a predictor of disease severity. GCS score less than equal to 8 considered as Severe, between 9-12 considered as moderate as and greater than 12 considered as mild. A diagnosis of JEV infection was based on clinical symptoms and anti-JEV IgM antibody in the acute phase cerebrospinal fluid (CSF) and serum samples measured by IgM antibody capture (MAC)-ELISA. Blood samples were drawn after written consent was obtained from each patient’s guardian.

TABLE 3: OUTCOME OF JE PATIENT AT THE TIME OF DISCHARGE 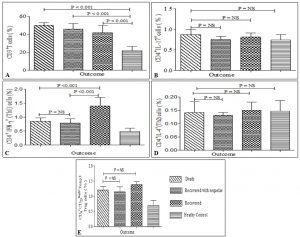 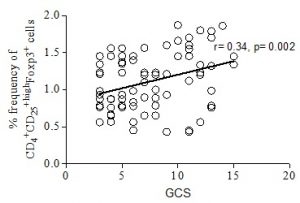 DISCUSSION: We have compared CD4+T cell subset among JE patients with different outcomes at the time of discharge, i.e. patient who died, a patient with sequelae, a patient who recovered. CD3, CD4th1, Treg cells mean percentage of found to be increased after infection when compare to the healthy control group, which is in agreement with a previous animal model study in which brain is infiltrating cells were identified during JEV infection, suggesting their role in during JEV infection 4. We have found CD4+IFNγ+ Th1 cells significantly higher in the recovered patients when compared to another group. Our results are consistent with a recently published study showing smaller IFN-gamma response was associated with poor outcome indicating a role for IFN-γ in recovery 8. Correlation between different lymphocytes and GCS score (indicates neurological manifestation) was also observed. A positive correlation was observed between GCS and Tregs cells. No correlation was observed between the rest of the lymphocytes and GCS score. Regulatory T cells (Treg) are involved in regulating excessive immune responses. Being the regulator of immune responses, it is possible that these cells may have important roles in modulating CNS inflammation in viral encephalitis. Tregs were also shown to be involved in controlling the development of symptomatic West Nile encephalitis in both mouse and humans 9. Using a murine model of human immunodeficiency virus encephalitis (HIVE), a recent study showed excessive ingression of Tregs in the inflamed CNS when compared to non-inflamed peripheral tissues such as spleen and liver 10.

In another study using HIVE, activated Tregs were shown to attenuate astrogliosis and microglial inflammation with concomitant neuroprotection, which was due to increased neurotrophic factors in brain 11. During JEV infection, neural stem/progenitor cells (NSPCs) in inflamed CNS, where there is excessive infiltration of activated T cells, may try to suppress the inflammatory activity by inducing conversion of activated T cells into CD4+CD25 + FOXP3 + Tregs 12.

CONCLUSION: We conclude that CD4Th1 might be associated with recovery after JE infection. Treg cells expansion during JEV infection may lead to an improvement in neurological manifestation. A deeper understanding of role T cells subset in limiting or controlling JE infection would be helpful in developing improved vaccination and treatment strategies against Japanese encephalitis infection.

FUNDING: This study is supported by the funding obtained from the Council of Scientific and Industrial Research, New Delhi, India.

ACKNOWLEDGMENT: We thank Kushinagar District Hospital Staff for helping us in sample collection as well as for their technical help. We would also like to acknowledge Dr. S. K. Mandal for his help with statistical analysis.

CONFLICT OF INTEREST: The authors declare that there is nothing to disclose.