ABSTRACT: Aim: Labetalol is useful in severe hypertension (HT) in pregnancy; however, there was a need to define its role in mild HT in pregnancy. The present study was done to evaluate efficacy of labetalol in mild HT in pregnancy, compare it with that of methyldopa, and compare the tolerability of methyldopa and labetalol in patients. Methods: A prospective drug comparative study was conducted for one year in 60 mild hypertensive pregnant women, with gestational age of ≥20 weeks, receiving either labetalol or methyldopa. The primary endpoint was control of blood pressure (BP). The parameters recorded for comparison were time and dose to control BP, dose escalation, urine albumin level, adverse effects, and pregnancy outcomes. Results: Both the drugs produced significant reduction in BP in the patients (p<0.001). The patients in both groups showed significant reduction of urine albumin. Same number of patients in both groups required dose escalation. Time to control BP was less in the patients receiving methyldopa than those receiving labetalol; however, the patients receiving labetalol reported lower prevalence of adverse effects. Conclusion: Labetalol and methyldopa were found to be equally efficacious in controlling BP and had equal maternal and fetal outcomes. Methyldopa brought quicker control of BP; however, labetalol was better tolerated. This suggested that methyldopa has a better control over the blood pressure during late pregnancy, while labetalol was more efficacious in controlling it in early pregnancy. Further studies with larger sample size would be pertinent.

INTRODUCTION: HT in pregnancy is Systolic BP (SBP) ≥ 140 mmHg and/or Diastolic BP (DBP) ≥ 90 mmHg after 20 weeks of gestation with previously normal BP 1, 2. It is the most common cause of maternal mortality with prevalence of 6-8%. 3, 4 It is approached according to its severity 1, 2. Oral methyldopa is a preferred medication for mild HT, whereas intravenous labetalol is used for hypertensive emergencies 1, 5.

Recently, oral labetalol is used for mild HT due to less incidence of adverse effects 1, 5. However, lack of enough evidence indicating the advantages of labetalol over methyldopa made us compare the two drugs in mild hypertensive pregnant females 6,7.

MATERIAL AND METHODS: An open-label parallel study was carried out in the antenatal ward of the Department of Obstetrics and Gynecology in a tertiary care rural hospital in India from November 2012 to December 2013. The study was approved by the Institutional Ethics Committee. Pregnant women with newly diagnosed hypertension (SBP of 140-159 mmHg and DBP of 90-109 mmHg) with gestational age ≥ 20 weeks were included in the study. The BP was taken twice with a gap of 4 hours to confirm HT.

The exclusion criteria were evidence of abnormal values of liver function or renal function tests, history of cardiovascular disorders or bronchial asthma, abnormal values in hemogram or blood glucose or lipid profile, retinal changes on fundoscopy, and ultrasound evidence of intrauterine growth retardation (IUGR) or fetal complications. The patients who lost to follow-up were excluded from the analysis. A total consecutive type of random sampling technique was used to alternatively allot 30 patients each to group A (labetalol) or group B (methyldopa), so as to include total 60 patients in the study 8.

The patients were enrolled according to a case record form with detailed history and general as well as obstetric examination. Hemogram, liver function tests (LFT), renal function tests (RFT), blood sugar, fundoscopic examination, urine albumin, fetal heart sounds, and obstetric ultrasound USG) -to rule out IUGR and other complications- were done. The patients fulfilling the criteria were admitted in the antenatal ward of Department of Obstetrics and Gynecology.

After appropriate investigations and evaluation, the patients included in the study were started with either labetalol in the dose of 100 mg every 12 hours (Group A) or methyldopa in the dose of 250 mg every 8 hours (Group B). Blood pressure (BP) was recorded every 8 hours (6 am, 2 pm, and 10 pm) after initiation of antihypertensive treatment (till 72 hrs). BP was measured using mercury sphygmomanometer on left arm after a rest period of 15 minutes in supine position. After 72 hours, BP was recorded once a day in the evening (10 pm) till day 7. The primary endpoint (control of blood pressure) was taken as SBP of 140 mmHg or less and DBP of 90 mmHg or less. The patients were started with lowest effective dose of both the drugs. If required after 72 hours, the escalation of dose for labetalol was increased to 200 mg every 12 hours and for methyldopa to 500 mg every 8 hours.

Some patients continued to have a BP > 140/90 mmHg, in spite of the treatment, and these patients were closely monitored in the hospital, and an attempt was made to continue their pregnancy to 37 completed weeks. The method and outcome of the labor were recorded. The patients were reviewed at the follow-up visits for BP measurement, blood tests, urine albumin, and fundoscopy.

The parameters assessed during pregnancy were control of BP, time taken to achieve the control BP, and adverse effects of medications. The parameters assessed at the time of delivery included the mode of delivery, birth weight of the newborn, the apgar score at 1 minute and 5 minutes, NICU (neonatal intensive care unit) stay, and the heart rate of the newborn. After delivery, the patients were observed for 3 days. BP was monitored and the antihypertensive drugs were added as guided by the blood pressure measurements. The patients were discharged after control of BP and confirming neonatal wellbeing.

The statistical analysis of the quantitative data was done using SPSS software version 17 and subjecting it to student’s t-test. Qualitative data was expressed in terms of percentages and was analyzed using Chi-square test.

RESULTS: The study was conducted from November 2012 to December 2013 in 60 patients with mild hypertension in pregnancy. The baseline parameters like age, weight, parity, gestational age, and blood pressure were similar in both groups. The age of the patients ranged between 19 and 38 years. Maximum parity was G5.

BP was not controlled in 14 patients (7 receiving labetalol and 7 receiving methyldopa), and hence dose escalation was done in these patients, after which the BP was controlled. Out of the 60 women, 17 (28.3%) delivered within 1 week of admission. Rest of the 43 patients in both groups were followed up till delivery and they had good control of BP with almost no major changes in laboratory parameters and fundoscopic findings. None of the patients developed eclampsia. Urine albumin was significantly reduced in both groups in 3 days. No maternal and fetal mortality was seen. None of the patients required addition of another antihypertensive drug. No adverse event necessitating stoppage or replacement of any medication was reported. When both the groups were compared for 3 days, SBP and DBP reduction did not show any significant difference except at the 24th hour, where the blood pressure reduction with labetalol was higher than that with methyldopa. (Graph 1) 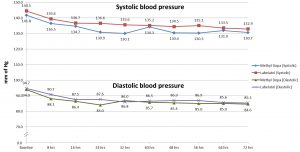 GRAPH 1: COMPARISON OF SBP AND DBP IN GROUP A (LABETALOL) AND GROUP B (METHYLDOPA)

Also on the 7th day, SBP and DBP did not show any significant difference in both the groups. (Table 3)

Time required to bring the blood pressure to control level was significantly more with labetalol than with methyldopa. (Graph 2)

GRAPH 2: COMPARISON OF TIME TO CONTROL BP IN BOTH GROUPS.

TABLE 4: COMPARISON OF NUMBER OF PATIENTS DEVELOPING ADVERSE EFFECTS IN BOTH GROUPS.

DISCUSSION: Labetalol and Methyldopa were found to be the most used drugs in pregnancy in a large cohort analysis 13. In the present study, labetalol and methyldopa both reduced BP significantly in mild hypertensive pregnant patients. Labetalol was found to be more efficacious than methyldopa in decreasing the systolic blood pressure at 24th hour. The SBP and DBP did not show significant difference in the two groups when compared after 1 week. Similar findings were reported by some other researchers in their studies 9,10.

Higher incidence of proteinuria was reported with methyldopa in a study; however, in the present study there was no such difference observed.11 In the present study no significant difference between the two groups was observed regarding requirement of dose escalation. Some researchers have reported such a difference, which was probably due to higher frequency of administration of labetalol 11, 12.

In a study wherein pregnant women with both types of HT (mild as well as severe) was included, the mean doses of both the drugs to control BP were found to be higher 12.

The present study found the adverse effects to be less in the patients receiving labetalol, and the side effects were minor and did not necessitate stoppage of any drugs or change of medications 10, 12. No significant difference was seen in the two groups regarding gestational age at delivery, type of delivery (vaginal or caesarean section) and number of preterm babies. The mean birth weight, SGA (Small for Gestational Age), heart rate of newborn, NICU stay, and Apgar scores did not show any difference between the two groups, this is similar to the findings of a previous study 9.

Methyldopa was able to set in a quicker control of blood pressure, but was found to be having higher incidence of adverse effects, which suggested that methyldopa is more suitable to be employed in comparatively later stages of pregnancy. Labetalol seemed to be better as far as the tolerability is concerned, which would make it a suitable antihypertensive to be employed in the earlier stages of pregnancy. More studies with larger sample size are suggested to corroborate the suggestions of the present study.

ACKNOWLEDGMENT: We would like to thank Dr. Aparna Chincholkar (Associate Professor, pharmacology) with design of the study and literature search, Dr. Rohan Krishnakumar and Dr. Gauri Khirid (post-graduate students, obst-gynaec), for assistance with data acquisition, . We would also like to thank Dr. Sachin Divekar (Assistant Professor, community medicine, GMC Yavatmal) for his guidance in the statistical analysis.