ABSTRACT: This research emphasis on microwave assisted extraction of fruits of Sapindus mukorrosai. Aqueous fruit extract is subjected for the isolation of saponins, focusing only on higher molecular weight of saponins using dialysis membrane. On treatment of aqueous solution of silver nitrate with isolated saponin, stable silver nanoparticles were rapidly formed. The green synthesized silver nanoparticles were characterized by UV-vis spectroscopy, scanning electron microscope (SEM), energy dispersive X-ray (EDX). The SEM confirms the synthesis of square shape of nanocrystalline particles with the size range of 60-90 nm. The presence of saponins has confirmed by FTIR spectra. These nanoparticle has been subjected for hypolipidaemic activity in animal model. It showed significant reduction in total cholesterol, triglyceride level, HDL and VLDL parameters

INTRODUCTION: Sapindus mukorossi Gaertn., a member of the family Sapindaceae, is commonly known by several names such as soapnut, soapberry, washnut, reetha, aritha, dodan and doadni. The fruit is valued for the saponins (10.1%) present in the pericarp and constitutes up to 56.5% of the drupe known for inhibiting tumor cell growth.1 The major constituents of Sapindus mukorossi fruit are saponins (10%-11.5%), sugars (10%) and mucilage.2

Saponins are secondary metabolites synthesized by many different plant species 3. Their name is derived from Latin word “sapo” meaning soap, due to their surfactant properties which allows forming stable soap-like foam upon shaking in aqueous solution.4, 5

They have many medicinal uses including, microbial, anti-tumor, anti-insect6 hepatoprotective, haemolytic 7, and anti-inflammatory activities. They also decrees blood cholesterol level and may be used as adjuvant in vaccines.8-14 In addition, saponins are used in preparation of soaps, detergents, fire extinguishers, shampoos, beer and cosmetic.15 Many saponins exhibit haemolytic activity, have a bitter taste and are toxic to fish.16

They are large molecules and contain a hydrophobic part, composed of a triterpenoid (30 carbon atoms) or steroid (27 carbon atoms with a 6-ring spirostane or a 5-ring furostane skeleton) backbone and a hydrophilic part consisting of several saccharide residues, attached to the hydrophobic scaffold through glycoside bonds. Terpenoid and steroid saponins are usually found in dicotyledonous and monocotyledonous plants, respectively. 4, 9, 17 Saponins with a glucuronic acid moiety at C-3 of oleanolic acid are found in the flowers, while saponins with a glucose moiety at the same position are found in the roots 18. Due to their amphiphilic nature, saponin molecules form micelles in aqueous solutions. The size, shape, and structure of the saponin micelles depend on their plant origin, pH, temperature and the presence of electrolyte in the solution.9

Saponins are a large family of structurally-related compounds of steroid or triterpenoid aglycone (sapogenin) linked to one or more oligosaccharide moieties by glycosidic linkage. The aglycone, or sapogenin, may contain one or more unsaturated C-C bonds. The oligosaccharide chain is normally attached at the C3 position (monodesmosidic), but many saponins have an additional sugar moiety at the C2,6 or C2,8 position (bidesmosidic).2

In many previous reports, green synthesis of nanoparticles was done in conical flasks utilizing H2O as a solvent.20 The bioreduction of silver from silver ions due to their surface Plasmon resonance (SPR) has been achieved using plants such as tamarind 21 Helianthus annus, Basella alba, Cinnamomum camphora, 22, 23 alfalfa, 24 Capsicum annuum, 25 Avena sativa, 26 Azardirachta indica, 27 and Pelargonium graveolens,28 have been reported for the presence of saponin. Due to the various medicinal properties of Sapindus mukorossai, thus commercial production of the saponin is quite high and thereby shows potential for the commercial synthesis of nanoparticles. In this study we describe for the first time, the isolation of higher molecular weight saponins from Sapindus mukorossai and its formulation of silver nanoparticle.

Extraction and isolation of saponins:

Fresh fruits of Sapindus mukorossai were cleaned, dried properly, extracted with double distilled water (200 ml) in a 250 ml wide neck borosil conical flask and were exposed to microwave for 180 s. Then the raw extract obtained was filtered in hot condition with 10 micron mesh to remove fibrous impurities. This extract is treated with n- butanol, kept for some time. Finally di ethyl ether was added into it to isolate saponins from the extract. This extract is passed through dialysis membrane into the water solution for getting high molecular weight of saponins.

A carefully weighed quantity of saponin was subjected to FTIR analysis. It was centrifuged at 10,000 rpm for 15 minutes and the pellet was washed three times with 20 mL of deionized water. The resulting purified suspension was completely dried and ground with KBr pellets and analyzed by FTIR.

Analysis through energy dispersive X ray (EDX) spectrometers confirmed the presence of elemental silver signal of the silver nanoparticles. The vertical axis displays the number of X ray counts whilst the horizontal axis displays energy in keV.  This analysis revealed that the nanostructures formed were solely of silver.

The prepared silver nanoparticle were characterized using high resolution SEM analysis. The samples were prepared by simple drop coating of the suspension of silver onto an electric clean glass and allowing the solvent to evaporate. The samples were left to dry completely at room temperature.

The bioreduction of nanoparticles was monitored periodically by UV-vis spectroscopy. The samples used for analysis were diluted with 2ml deionized water and measured by the UV-vis spectrum at different interval time intervals. The UV-vis spectrometric readings were recorded at a scanning speed of 200  to 750 nm.

FIG.1: SHOWING GREEN SYNTHESIS OF SILVER NANOPARTICLE USING SAPONIN ON THE BASIS OF CHANGE IN COLOUR

The fractionated part of saponin were  administered in the form of suspension p.o. at two  dose levels of 200 and 400 mg/kg body weight to rats  as 1 % (w/v) sodium carboxy methyl cellulose  (SCMC) for evaluating their hypolipidemic and  antihyperlipidemic effects. Triton was purchased from SD Fines Chemical and Kits for lipid profile analyses were purchased from a local supplier, viz; TC and HDL (Span Diagnostics), TG (Diassays, Germany). Male Albino rats of the Sprague-Dawley strain (average weight 150 g), bred and maintained in our Institute’s Animal House were used for the study after prior scrutinization and approval from Institutional Animal Ethical Committee (IAEC). Antihyperlipidemic potential of LSFE in Triton-induced hyperlipidemic rats and in normal rats was evaluated as per the method described by Moss 31, Vogel 32 and Hirsch,   et al 33.

The antihyperlipidemic effects of the above extracts were evaluated in 45 Triton-induced hyperlipidemic rats starved for 18 hr. The  rats were divided into 9  groups of 5 each and then injected, ip, with Triton at a  dosage of 100 mg/kg body weight except rats of  Group I, which served as normal vehicle treated and  Group II as control treated with 1% SCMC, po. Group III were treated daily with saponin nanoparticles in two divided doses of 200 and 400 mg/kg, respectively immediately after the Triton injection by ip administration. Blood samples were collected after 6, 24 and 48 hr of Triton injection to evaluate the lipid profile.

Triglyceride (TG) was determined colorimetrically by enzymatic reaction using glycerol-3-phosphate oxidase. Enzymatic splitting of lipoprotein lipase along with reaction between 4-aminoantipyrin, 4-chlorophenol and H2O2 under catalytic action of peroxidase generates quinimine which is used as internal indicator in   this colorimetric determination. LDL was   determined by using Friedelwald’s formula LDL=TC − (TC − VLDL) 36 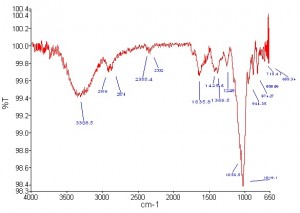 The kinetics of reduction of aqueous silver ions during reaction with the saponin of Sapindus mukorossai were easily analyzed by the UV Visible spectroscopy. The optical adsorption UV-vis spectra of silver nanoparticles produced by different amounts (5, 10, 15 ml) of the dried saponin of Sapindus mukorossai. The result show the production of silver nanoparticles within 18 hours after silver ions came in contact with the saponin. The addition of isolated saponin solution to the aqueous AgNO3 solution resulted in the colour of the solution changing to dark brown due to the SPR. The colour change has been noted because of the production of silver nanoparticles. (Fig.1)

GRAPH 3: UV- VIS ADSORPTION SPECTRA OF SILVER NANOPARTICLE AFTER BIOREDUCTION KINETICS OF THE REACTION OF SAPINDUS MUKOROSSAI WITH AQUEOUS SILVER IONS AT 5 ML (A), 10 ML (B), 15 ML (C) IN THE CONCENTRATION RANGE OF 2000 TO 750 NM WITH DIFFERENT TIME INTERVALS.

The SEM image showing high density Ag-NPs synthesized by using the isolated saponin fraction further confirmed the development of silver nanostructures. Finally nanoparticles obtained are square in shape and of uniform size. Higher magnification showed the average diameter of these square nanoparticles to be about 60- 90 nm. (Fig.2). The SEM analysis of silver nanoparticle supports the results of Govindaraju et al in S. platensis. 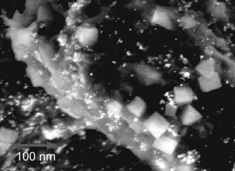 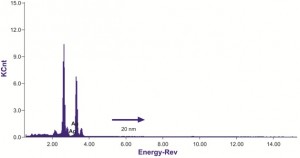 GRAPH 4: EDAX PROFILE OF SILVER NANOPARTICLE RESULTING FROM THE EXPERIMENT BY USING 15 ML OF SAPONIN FRACTION OF SAPINDUS MUKOROSSAI.

Saponins nanoparticles showed decrease in blood lipids in hyperlipidemic rats when compared with their respective controls. It showed significant (P<0.05) decrease in TC, TG and LDL along with an increase in HDL level, dose-dependently at the tested dose (400 mg/kg body weight), when administered in Triton-induced hyperlipidemic rats (Tables 1 and 2).

Saponins also act as antihyperlipidemics by one of the following mechanisms as by binding with cholesterol in intestinal lumen, so that cholesterol is less readily absorbed or bile acids causing reduction in its extra hepatic circulation and increasing metabolism of cholesterol to sterols through their fecal excretion.  Increase in bile acid excretions offset by enhanced synthesis from cholesterol in the liver consequently lowers the plasma cholesterol. Saponins are also reported to increase the lipoprotein lipase activity (LPL), which is considered as helpful in faster removal of free fatty acid from circulation that causes in turn a decrease in total cholesterol 37, 38, 39. Soluble dietary fiber contents are having the beneficial effect in the promotion of bile acid formation and their excretion in the stool or in the blockage of cholesterol absorption 40.

TABLE 2: EFFECT OF SAPONIN ON HDL AND LDL IN TRITON-INDUCED HYPERLIPIDEMIC RATS  [VALUES, EXPRESSED AS mg/dl, ARE MEAN ±SE OF 6 ANIMALS IN EACH GROUP]

CONCLUSION: This research is an attempt to prove that saponin could be an excellent bioreductant and can be easily isolated from plant source for synthesis of silver nanoparticle. This method seems to be ecofriendly and therefore this protocol could be used for the rapid production of silver nanoparticles. These saponin nanoparticles shows significant effect in hypolipidaemic activity.