Categories Menu
Home » ROLE OF MITOCHONDRIA IN DIABETES AND ITS COMPLICATIONS

ROLE OF MITOCHONDRIA IN DIABETES AND ITS COMPLICATIONS

ROLE OF MITOCHONDRIA IN DIABETES AND ITS COMPLICATIONS

ABSTRACT: It has been reported that mortality associated with diabetes is about 2.9 million cases in World. The most common diabetes complications consist of cardiovascular disease, renal failure and blindness. The increase of lipid oxidation and reduction of antioxidants in mitochondrial dysfunction were showed. The role of investigation on mitochondria damage is requiring for evaluation of insulin resistance. In this study, we reviewed the relationship between mitochondrial function to diabetes and its complications according to latest study during 2011 - 2015 using databases such as pubmed, science direct and web of science.

INTRODUCTION: Increased blood sugar due to reduction or dysfunction insulin leads to diabetes mellitus. The type 1 often seen in children due to failure of the pancreas for insulin secretion and its type 2 is a multi-factorial disease, especially due to obesity and genetic disorders 1, 2. This disease is linked to many problems such as end stage renal disease (ESRD), diabetic macular edema (DME), and cardiovascular disease (CVD) 1, 3 - 5. The increase of diabetes prevalence created serious problems in today's societies, so that dispel them required to spend many costs 6. A conducted research in 2000 was showed that the prevalence of diabetes would increase by 37% in the future 30 years 7.

Statistics were determined that according to collected data from 130 countries in 2013, there are 382 million diabetic patients and possibly will reach to 592 million by 2035 8. Today although, there are antidiabetic drugs, but mainly intention is to the use of herbal medicine 9 - 11. It has been estimated about 2.9 million mortality attributed to diabetes in 2000 (mainly associated with type II diabetes).

In 2004, it has been mentioned the increase of death heart disease and stroke associated with diabetes in the United States 12. There is mitochondria in the cytoplasm of all eukaryotic cells and has a key role in the oxidative phosphorylation, glycolysis, oxidation of fatty acids and energy homeostasis 12, 13. The effect of mitochondrial dysfunction in the development of type II diabetes should be checked because there are differences of opinion on this matter and has not yet determined cell's response to mitochondrial dysfunction and its released signal 14, 15. In line with our recent studies on diabetes complications 16, peroxidane / antioxidant imbalance 17, heart failure 18, trace element changes 19, as well as on the mechanisms of plant ingredients in the treatment of diabetes mellitus 20, this study designed. The role of mitochondria in the development of complications associated with diabetes was viewed.

MATERIAL AND METHODS: To evaluate of new studies, we used databases such as pubmed, science direct, and web of science from 2011 to 2015.

Mitochondria and Complications of Type II Diabetes: Increase of NEET protein activity makes maintain fat reserves and energy homeostasis and it has well been known that reduction of NEET protein in the mitochondria resulted in appearance of symptoms pre-diabetes such as impaired glucose metabolism 14. Our results on the evaluation of oxidation and peroxidation in women with type 2 diabetes showed that lack of balance in the oxidation and peroxidation seen in these patients. We examined the levels of superoxide dismutase, malondialdehyde and catalase and found that significant changes in these parameters occur in diabetes 17. When mitochondria is under high oxidative stress condition during early stages of diabetes, mitochondrial dysfunction is evident Fig. 1; on the other hand, to normal insulin function occurs followed by decreased lipid oxidation 21. 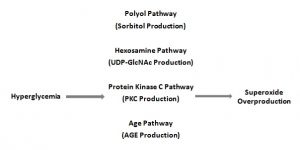 FIG. 1: THE ROLE OF HYPERGLYCEMIA IN MITOCHONDRIAL SUPEROXIDE OVERPRODUCTION DURING EARLY STAGE OF DIABETES 22

We in a case study on 60 patients with type 2 diabetes found that imbalance of essential elements such as zinc and copper occur under diabetes so that it is associated with decrease and increase in zinc and copper respectively 19. Diabetes is often associated with obesity that probably it is main reason disruption of energy homeostasis and resulted from mitochondrial dysfunction 23. The comparison between different animal models of diabetes were determined that mitochondrial dysfunction there was only in models with high-fat diet (models for diabetes type 2) 24. Perhaps Hsp60 is main factor relationship between diabetes and obesity. Studies were shown that in mice with knockout Hsp60 were occurred hypothalamic mitochondrial dysfunction and lead to the development of insulin resistance.

Moreover, the lack of leptin regulation during obesity resulted in reduction of Hsp60 production and development of type 2 diabetes. These event scan be reversible by weight loss 25. Neuropathy is one of the complications of type 2 diabetes. During diabetes the transfer of BAX and cytochrome C from mitochondria to the cytoplasm lead to apoptosis in the hippocampus neurons and ultimately loss of spatial memory 12. Evidence suggests that diabetes can be one of the main factors of Alzheimer's disease. In addition, it has well been known that mitochondrial dysfunction can be associated with Alzheimer's disease 26. A survey conducted on patients with type 2 diabetes was shown that there was a link between endothelial dysfunction and impaired mitochondrial function.

TABLE 1: THE PERFORMED STUDIES ON MITOCHONDRIA AND COMPLICATIONS OF TYPE 2 DIABETES

In a study was showed that diabetics patients with nephropathy was lowered expression of OAT1 and OAT3 and this results were confirmed by reduction of PGC1α production and mitochondrial DNA, which indicates a lack of regulation of mitochondrial metabolism in diabetes 31.

In another study was mentioned that the presence of oxidized CoQ10 mitochondria is other reason neuropathy. It was shown that diabetic mice treated with CoQ10, was improved mitochondria function because normalized of ATP production and level of oxidative stress 32.

CONCLUSION: In this study, we reviewed the role of mitochondria in complication of diabetes. Our review indicated that damages of mitochondria could be important in development of diabetes such as cardiomyopathy, nephropathy, and retinopathy.

Also insulin resistance in diabetes can be associated with alzheimer probably due to dysfunction of mitochondria. Therefore, we need to separate plant compounds and examine their effects on diabetes.

ACKNOWLEDGEMENT: We acknowledgement and gratefulness at the beginning and at last is to god who gave us the gift of the mind. The authors thank Young Researchers and Elite Club, Yasooj Branch, Islamic Azad University due to cooperation in this study and also to Radioisotope Division of AEOI for providing the freeze-dried MIBI kits and 99Mo/99mTc generators.

ETHICAL APPROVAL: This research does not contain any studies with human participants or animals and was performed by the authors alone.

FINANCIAL SUPPORT AND SPONSORSHIP: This study was supported by the authors named in this article alone.