ABSTRACT: Introduction: Inhaled Corticosteroids remain the mainstay therapy for asthma. Uncontrolled asthma (UA) dose not respond to the highest inhaled corticosteroids, which remains a challenge for clinicians. Multidrug resistance-associated protein 1 (MRP-1) are molecular "pumps," which expel toxins and modulate corticosteroids' pharmacokinetics and may lead to UA. Moreover, their role in UA is still not clear and needs further investigation. Our study evaluated the expression and functionality of MRP-1 in patients with controlled asthma (CA) and UA. Materials and Methods: UA was defined as a lack of control with high dose inhaled corticosteroids along with the use of other controller medications. Whole blood MRP-1 expression and functional activity on peripheral blood mononuclear cells (PBMCs) in UA (n=38), (mean age = 53.53 ± 11.85, male = 18) patients, CA) (n=60) (mean age = 51.65 ± 16.99, male = 31). MRP-1 was analyzed by flow cytometry. Result: Expression of MRP-1 positivity on lymphocyte gated population was significantly higher in UA than CA (p<0.001). Similarly, the functional activity of MRP-1 was significantly increased in UA as compared to CA (p<0.001). Receiver operating characteristic (ROC) curve analysis of UA was plotted to test the diagnostic accuracy of MRP-1expression; cut off percentage of MRP-1 was observed 11.21% with a sensitivity of 81.2% and specificity of 80%. Change in proximal forced expiratory volume tests (FEV1) showed a linear correlation with MRP-1. MRP-1 negatively correlated with FEV1 by Pearson correlation (p < 0.001), respectively. Conclusion: MRP-1 may help in the early diagnosis of poor response of corticosteroids. MRP-1 inhibitors may be used as an additional treatment for managing the poor response of corticosteroids.

INTRODUCTION: Inhaled corticosteroids (IC) remains the mainstay therapy for the treatment of asthma for many decades; nearly about 5% of patients with asthma do not respond to the standard medications and are considered difficult to treat asthma 1, 2.

The symptoms of asthma may be due to bronchial airway hyper-responsiveness to initiate mucosal edema, which may cause airway narrowing and symptoms in the form of wheezing, coughing, shortness of breath and/or chest tightness 3, 4.

The Global Initiative for Asthma (GINA) consider detailed database through the International Study of Asthma and Allergies in Childhood and  European Community Respiratory Health Survey by 2004, 300 million around individual suffer due to asthma of all different age group, but by the year of 2025, the counted number could be 400 million worldwide 5.

Some patients need high dose and who do not responds to inhaled corticosteroids are considered as uncontrolled asthma (UA) and are treated with second-line of treatment are superintend by oral steroids or omalizumab 6, 7.

In one of the studies, the authors observed that P-gp is an efflux protein whose main function is to efflux out the xenobiotic, including steroid, from inside of the cell to outside of the cell. There was some patient whose P-gp expression and function were normal, yet they did not respond to the first line of treatment, another protein from same family MRP-1 has been reported to be over-expressed in many resistant phenotypes and plays a vital role in the physiology of healthy lung through protection against toxic xenobiotic and endogenous metabolites 8. MRP1 was shown to be highly expressed in the healthy human lung 9. MRP-1 is a 190 kd molecule and also acts as a multitasking” ATP-binding Cassette (ABC) Transporter protein, which is located on chromosome 16p13.12 9, 10. Scheffer et al., revealed that MRP1 could protect lung tissue from airborne xenobiotics, which may trigger a type of cell proliferation, and also MRP1 is localized into the basolateral surface and, therefore, MRP1 would be anticipated to transport toxins into the lung interstitial space 11. However, there are very few numbers of asthmatic patients who do not respond to inhaled steroid-treatment 12, 13.

Although the molecular mechanism behind resistance is unclear, some possible mechanisms have been observed, such as the decrease amount of glucocorticoid receptor 14, 15 and the second dysfunction of the glucocorticoid receptor, last expression of transcription factors increase which implicated in inflammation such as activator protein-1 (AP-1) 16. Similarly, it is possible that excretion of inhaled drugs and stimulation of metabolism at bronchial tissues leads to a decrease of the effect of the drugs 17.

As in the treatment of asthma, corticosteroids play a significant role; its bioavailability to the cells is one of the limiting factors for its action and may lead to the disease phenotype. Therefore, we aimed in this study to evaluate the role of MRP-1 expression as well as functionality on lymphocytes and also to check its usefulness as a biomarker for steroid responsiveness in UA.

Patient Recruitment: The diagnosis of asthma and the assessment of severity were made according to the GINA assessment of asthma control 2016 criteria. The diagnosis of asthma was made clinically, supported by routine investigations and spirometry. The control was defined by the absence of (i) daytime symptoms more than twice a week, (ii) any night-time awakening, (iii) a requirement of reliever medication more than twice a week, or (iv) any activity limitation due to asthma in the past 4 weeks. Asthma was labeled as uncontrolled if 3 or 4 of these symptoms were present despite being on 800 mcg of budesonide or 1000 mcg of fluticasone, with adequate compliance and proper inhalational technique (GINA score 3 or 4). The patients who had none these control symptoms on their usual medications were labeled as controlled asthma 6. The patients with partially controlled asthma (GINA score 1 or 2), a history of smoking, and a history of other respiratory diseases were excluded from the study. The study group comprised of 98 individuals with bronchial asthma, of which 60 were controlled, 38 were uncontrolled. Ethical approval was taken from the Institute Ethics Committee (Human Research), Sanjay Gandhi Post Graduate Institute of Medical Sciences, Lucknow, India, and written consent was obtained from the patients.

Lymphocytes were gated from whole blood (gate P1, Fig. 1A, and Fig. 2A), and Quadrant was applied for MRP-1 positive cells for isotope cell Fig. 1B and test sample Fig. 2B.

The continuous data were presented in mean ± standard deviation, analyzed via a t-test. Categorical variable data were analyzed using the chi-square test as well. The continuous data were considered to be normally distributed if SD ≤ ½ of the mean value. The SAPs were analyzed for their association with SC A, by using SPSS 20.0 statistical package (SPSS Inc., Chicago, IL, USA). The association was determined by binary logistic regression analysis. The statistical significance was considered as p<0.05.

RESULTS: After screening of 110 patients, 98 patients who fulfilled the inclusion criteria were recruited in the study. Among the recruited 98 patients, 60 (51.65 ± 16.99, Male = 38) were controlled asthma, whereas 38 (53.53 ± 11.85, Male=17) were uncontrolled asthma shown in supplementary Table 1. Demographic and biochemical details are shown in supplementary Table 2.

Receiver Operating Characteristic (ROC) Curve: Discrimination between UA and CA Cases: ROC curve was plotted to test the diagnostic accuracy of the test variables (MRP-1expression) to discriminate uncontrolled asthma to controlled asthma cases. Cut off percentage of expression of MRP-1 was 11.21% with a sensitivity of 81.2% and specificity of 80%. Supplementary Fig. 3. 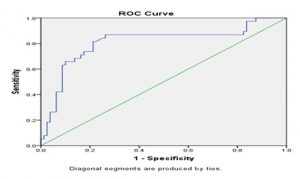 Linear Correlation with Mean MRP-1 Expression and FEV1: Regression analysis (Supplementary Fig. 4A) was used to find out whether a change in MRP-1 expression values correlated with the improvement of forced expiratory volume Tests. Change in proximal forced expiratory volume tests (FEV1) showed a linear correlation with the mean. Mean MRP-1expression a value was observed a negative correlation between FEV1 by Pearson correlation (p value< 0.001) Supplementary Fig. 4A and Fig. 4B. 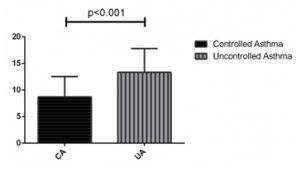 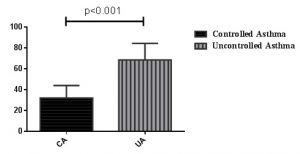 DISCUSSION: In the present study, we observed that there was an increase in the expression and functionality of MRP-1 in patients who did not respond to steroids. We also observed that there was a negative correlation between expressions of MRP-1 with FEV-1; to the best of our knowledge, this was the first attempt to correlate MRP-1 with FEV-1 in asthma. Management of uncontrolled asthma patients is a major concern faced by clinicians, and it remains an area of research to be explored. MRP-1 participates a major role in expression in the lung, and there is evidence that these ABC transporters and activity may be central and vital roles during pulmonary drug delivery at the site of action as well as protection against exogenous or endogenous toxic compounds entering the lung 19, 20.

In one of the previous studies, Singh et al., observed that P-gp expression and function areup-regulated in steroid-resistant nephrotic syndrome as compared to a steroid-sensitive nephrotic syndrome, which was supported by another experiment in another disease phenotype in which steroid was the first line of treatment like in asthma. There is only one study in bronchial asthma in which MRP1 mRNA was highly expressed in bronchial epithelial cell lines wherein expression of receiving inhaled corticosteroids as compared to beclomethasone dipropionate 21. MRP-1 is expressed in most tissues throughout the body, with relatively high levels found in the lung, testis, kidneys, skeletal muscle, and peripheral blood mononuclear cells, while relatively low levels are found in the liver 22.

Nevertheless, in the case of one study, when exposed to bacterial toxins, PBMCs release a plethora of cytokines 23, 24. Some cytokines i.e. (interleukin -1, tumor necrosis factor -α) induce chemokines (interferon-inducible protein -10, Monocyte Chemoattractant Protein-1 and, Macrophage Inflammatory Proteins -1) and cell surface adhesion molecules like Intercellular Adhesion Molecule 1 stick-on pulmonary epithelial cells which in turn provide a signal to inflammatory cells and PBMCs into the lung and potentiate inflammation. Thus, there is a clear picture of bidirectional interaction between PBMCs and pul-monary epithelial cells in asthma. Understanding the responsiveness of these PBMCs to steroids is essential to suppress inflammation in asthma.  It has been reported that overexpression of both P-gp and MRP-1 is associated with drug resistance in renal cell carcinoma (RCC) 25. Similarly, over-expression of MRP-1 has been reported to be associated with multidrug resistance in patients with leukemia, 6 overexpression of both P-gp and MRP-1 has been reported in nephrotic syndrome 26. In accordance with these studies, we also found increased expression of MRP-1 with the therapy of glucocorticoid in uncontrolled patients compare to controlled patients.

CONCLUSION: After this discussion, we also found some earlier studies which strongly support our research work and expected treatment of resistant asthma in the future in which MRP-1 inhibitor drug may key role. MRP-1 are highly seen in bronchial epithelium cell, and during expression, ABC molecules been observed in different cell types, cause protection against noxious compounds, i.e. air pollutants and cigarette smoke. Altered ABC transporter role is mostly seen in highly pulmonary diseases such as asthma. Finally, it may be concluded by the present study that MRP-1overexpression on PBMCs may contribute to resistance in bronchial asthma and help to provide an alternative treatment.

This work received funds from the Intramural Grant (PGI/DIR/RC/1057/2017) of Sanjay Gandhi Postgraduate Institute of Medical Sciences (SGPGIMS), Lucknow. The authors are thankful to the Department of Immunology, SGPGIMS, for providing support.

CONFLICTS OF INTEREST: The authors declare that the research was conducted in the absence of any commercial or financial relationships that could be construed as a potential conflict of interest.