Background: Coronary artery disease /coronary vascular disease (CAD/CVD) remains the first killer and common silent disease in the world. The lipid profile plays the essential role in CAD development with lipid oxidation.  Lipid oxidation, which accepted as an important element of arterial plaque formation and atherosclerosis, is involved in the patho physiology of   CVD. Bilirubin exerts a strong antioxidant effects at physiological plasma concentrations against lipid oxidation in blood artery.

Methodology: Parameters were measured on a fully automated analyzer using standard reagent kits in a retrospective study involving 100 male Indian subjects between 35 to 55 years of age.

Results: Serum total bilirubin was correlated positively with serum high density lipoprotein (HDL), while it was negatively correlated with glycosylated hemoglobin (HbA1c), there were no statically significance present between serum total cholesterol and serum triglyceride in hospitalized patients, not in healthy subjects.

Conclusions:   we were concluded that, the serum total bilirubin concentration will be an independent cardiovascular risk factor such as lipid profile.

INTRODUCTION:Bilirubin is considered a strong reducing

agent and a potential physiological antioxidant 1. The main role of bilirubin antioxidation action is via ROS process, the ROS of biliverdin and bilirubin generation are both potent scavengers of peroxyl radicals 2.

Lipid profile (Cholesterol, Triglyceride, and LDL) are the essential players compounds in CAD developments steps, except HDL which retards CAD development. According to other studies of lipid profile with CAD relationship, multiple epidemiologic studies have established a low level of HDL as an independent risk factor for CVD 10.

Abnormalities of the oxidation-reduction state of LDL in the vessel wall may be an important pathogenic mechanism in atherosclerosis 11, which lead to start the atherogenesis process in layers of vessel wall.

The Framingham Heart Study observed that the individuals with HDL concentrations of ≥ 60 mg/dL are protected against the development of CAD even in the presence of elevated serum LDL levels 12. In general, the HDL and its components associated (including apo A-I, paraoxonase, platelet activating factor acetylhydrolase, and other antioxidant enzymes) exert an array of effects that may help prevent atherosclerosis and acute coronary syndromes 13.

The oxidative reactions are involved in the pathophysiology of disease processes14.  According to the literatures, serum Bilirubin had an inverse relationship with CAD risk factors as serum cholesterol, cigarettes smoked/day, high systolic blood pressure, serum TG and fasting glucose 15.  But little literature had not observed any relationship between bilirubin and lipid profile 16.

In view of aforementioned controversial literature, we were aimed to evaluate the different biochemical lipid parameters with HbA1C, related to risk of CVD/ CAD and serum Bilirubin, in the healthy and admitted subjects.

MATERIALS AND METHODS: This retrospective study was conducted at the Shri Ram Murti Smarak Institute of Medical Sciences, Bareilly (India) on 100 male [50 healthy OPD and 50 IPD admitted in the hospital for clinically different complaints instead of CVD/CHD] subjects. The clinical biochemistry laboratory of the hospital of Shri Ram Murti Smarak Institute of Medical Sciences, Bareilly (north Indian city) regularly analyses samples of company employees who attend the medicine outpatient department (OPD) for “health checkups” under which they are tested for various biochemical parameters including  HbA1C , serum bilirubin and the standard lipid profile. Such OPD and IPD attendees from March 2012 to October 2012, which were tested for HbA1C, lipid profile, and serum bilirubin, were considered for our study. The exclusion criteria were (a) females, (b) men below 35 or above 55years and (c) subjects who had TG > 400 mg/dl.(d) patients on known lipid altering medications, (e) diabetics, patients with chronic kidney disease, liver disease and CVD. As per hospital records, all the selected “health check-up patients” were healthy by normal standards and had no associated cardiovascular complications. The lipid profile, HbA1c and serum Bilirubin levels of these subjects were used for our study. 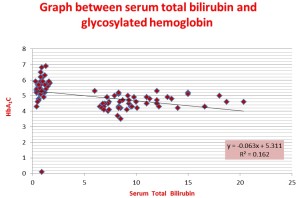 GRAPH A: BETWEEN SERUM TOTAL BILIRUBIN AND GLYCOSYLATED HEMOGLOBIN IN OPD AND IPD SUBJECTS 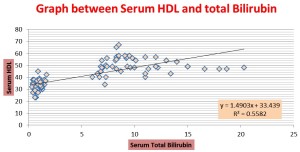 GRAPH B:  BETWEEN SERUM TOTAL BILIRUBIN AND SERUM HDL LEVEL IN OPD AND IPD SUBJECTS

Coronary artery diseases develops through narrowing of the coronary arteries which leads to death of portion of the heart muscle because of lacking of blood flow that supply oxygen and nutrition, and leads to heart attack.18. Lipid profile plays the essential role of lipid deposition in artery wall and CAD development, by accumulating the LDL inside layers of artery wall, except HDL which has beneficial effects for a number of reasons by decreasing lipid oxidation after depositing in blood vessels, leading to retarding CAD development 19, 20.

Serum Bilirubin is derived primarily from the degradation of hemoglobin. Bilirubin exerts a strong antioxidant effects at physiological plasma concentrations against lipid oxidation in blood artery (1). While the heme oxygenase (HO-1) is a key enzyme of heme catabolism from red blood cells breakdown, which catalyzes the oxidative cleavage of heme which results in releasing CO, iron (Fe2+), and Bilirubin.

An inducible form of HO (HO-1) is expressed at a low concentration in vascular endothelial and smooth muscle cells. It is markedly induced by heme, metals oxidative stress, inflammatory mediators oxidized LDL and hypoxia. Several experiments have suggested that HO-1 is a stress response protein that plays an important function in cell defense mechanisms against oxidative injury. HO-1 activity is responsible for increased CO and Bilirubin formation as well as iron release in pathological conditions such as CVD, hypoxia, ischemic-reperfusion and hypertension21.

According to literatures each 1-mg/dL decrease in plasma HDL concentration is associated with a 2% to 3% increased risk of CVD18, 19. It means when increased the level of serum HDL then decreased the risk of CVD/ CAD.  A low level of HDL as an independent risk factor for CVD 10. Our study was also correlated with Framingham Heart Study which was reported 43% to 44% of coronary events occurred in persons with HDL levels less than 40 mg/dL22. The beneficial effects of HDL are via protection through multiple pathways, which is including both reverse cholesterol transport and non-cholesterol dependent mechanisms 23.

High-normal plasma level of Bilirubin was reported to be inversely related to atherogenic risk and to provide protection against endothelial damage. Risk reduction by bilirubin was comparable to that of HDL by CAD development retarding mechanism14, 24. The oxidative stress was found to cause depletion of endogenous antioxidants, including bilirubin, in human plasma and to increase production of lipid hydro peroxides 25. In addition, other study has shown that the increases in serum bilirubin concentration (but still within the normal range) are associated with a significant and marked reduction in CAD risks 8.  Few studies concluded that low concentrations of serum bilirubin are associated with increased risk of IHD 9.

In our study we were not found any statically significant differences between serum TC, TG and LDL in both groups.  But we were found a negative relation between serum bilirubin and glycosylated hemoglobin in admitted patients, while there were a positive relation in OPD patients who had normal or lower Bilirubin concentration. In middle-aged adults, higher “normal” levels of glycated hemoglobin were associated with increased risk for diabetes, CVD, ischemic stroke, and total mortality in adults 27. This fact was also correlated to our study with the fact of inverse association between serum bilirubin and CAD development, although it involves endogenous anti-oxidant byproduct as HDL role.

ACKNOWLEDGEMENTS: We are indebted to the staff of the Department of Biochemistry, SRMS, Institute of medical sciences and attached Hospital, Bareilly (Uttar Pradesh) for their technical assistance. All authors Contributed to the skillful editing of the manuscript and interpretation of results.

Authors' Contributions: NS, SS, and GGK contributed equally to the skillful editing of the manuscript and interpretation of the results.

Declaration of Interest: No conflict.