In present QSAR study of TIBO derivatives, aim of the author is to analysis some different 3D parameter in order to get best QSAR model, which enhance the binding affinity of TIBO derivatives. Solvent accessible surface area (3D) of all atoms with positive partial charge (strictly greater than 0) and Balaben 3D index plays vital role in this concern. This study focuses on some important and different 3D parameter in place of other conventional 3D parameter. The greater value of multiple R (= 0.9421) and lower value of Standard error (Se= 0.4981) shows that the find mathematical model is best fit and give the structural requirements of TIBO derivatives in particular sets of compounds to enhance the binding affinity of the drug.

INTRODUCTION: The treatment of the acquired immunodeficiency syndrome (AIDS) is the most challenging worldwide medical problem. Most of the current strategies for treating AIDS depend on inhibiting HIV-1 reverse transcriptase enzyme. The introduction of antiretroviral therapy results in delayed progression of HIV-1.

The majority of existing therapy methods has targeted the viral replication at reverse transcriptase (RT) and protease enzyme 1, 2. However, the emergence of drug resistance has been observed 3, 4, therefore, new therapeutic agents are still needed. Recently, a new class of therapeutic agents has focused on inhibiting HIV entry into cells, CD4 binding, co-receptor binding and membrane fusion such as T-20 5.

The NNRTIs play an important role in current anti-HIV therapy as a part of a successful combination therapy. Different aspects of NNRTIs have recently been reviewed such as; NNRTIs in general 6-12, specific NNRTIs 13-18, resistance issues 19-20, x-ray and binding of NNRTIs [21-22], clinical use of NNRTIs 23-26 and toxicity issues with NNRTIs 27-30.

To date, many classes of NNRTIs have been identified, and three inhibitors, nevirapine, delavirdine, and efavirenz, have been approved in 1996 for the treatment of HIV-1 infection by the US Food and Drug Administration (FDA).

The investigation of the quantitative structure activity/property relationships (QSAR/QSPR) of substances is an important aspect of modern chemistry, biochemistry, medicinal chemistry, and drug discovery 31-36.

The information obtained is composed of mathematical equations relating the chemical structure of the compounds to a wide variety of their physical, chemical, biological and technological properties.

Once a correlation between structure and activity/property is found, any number of compounds, including those not synthesized yet, can readily be screened in silico for selection of structures with desired properties. Hence, it is possible to select the most promising compounds for synthesis and testing in the laboratory.

Data set: As a part of ongoing efforts to design novel molecules with potent anti-HIV activity, a QSAR analysis was performed to relate HIV non-nucleoside reverse transcriptase inhibitors activity of TIBO derivatives to its 3D properties. The selected series consists of total 16 numbers of compounds. The biological activities were expressed in terms of inhibitory concentration (pIC50).The parent structure of the TIBO is given in the fig 1. Table 1 shows the all 16 derivatives of TIBO used in the present study. Experimental anti-HIV activity (pIC50) complied from references 37-45.

TABLE 1: STRUCTURES OF THE COMPOUND USED IN PRESENT STUDY 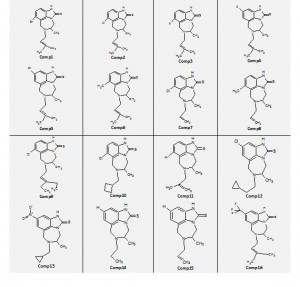 Calculation of the Parameter: All the parameters were calculated by Marvin bean and Dragon freeware software in this study.

TABLE 2: VALUES OF DESCRIPTORS USED IN THE SELECTED QSAR MODELS

RESULTS AND DISCUSSION: In the present study, we tried to develop best QSAR model to explain the correlations between the 3D parameters and HIV non-nucleoside reverse transcriptase inhibitor activities of TIBO derivatives. Among several QSAR equations the best QSAR models were selected on the basis of various statistical parameters such as correlation coefficient (R > 0.9), standard error of estimate (SEE < 0.5), and F-test values at 99% significance level. Only those descriptors having intercorrelation coefficient above 0.5 were considered for the present study.

Multiple regression analysis method has been adopted to get the best QSAR model. On the basis of correlation matrix, we find that the following parameter is best to generate the QSAR model.

TABLE 3: VALUES OF OBSERVED AND CALCULATED PIC50 FOR GIVEN SETS OF COMPOUND

The negative value of MnPR shows the inverse correlation with the drug binding affinity. So, in order to get best model we have tested various biparametric combination and the table given below shows the best result orientated model-

The biparametric table 5 shows that, MnPR along with 3 dimensional Balaben index (J3D) dominance on other parameter.  The smaller value of Se and higher value of F justify the importance of equation. Balaben index is basically a topological parameter, but here we use 3D Balaben index and it give tremendous result in the binding affinity of the drug in present set of TIBO compound. The best biparametric combination is as follows-

Again in this mathematical model, MnPR shows the inverse relationship so, that the highly negative Minimal Projection Radius Å2 enhance the binding affinity. From here, we started to test the various triparametric combinations and the table 6 given below shows the best result orientated model-

Greater value of J3D in eq(3) shows that the role of Balaben 3D index is increasing and solvent accessible area  of drug is more important than that of  Van der waal surface area. One of the compounds shows the higher residue in the table. So after the deletion of the compound the model obtained is as follows-

In the above QSAR models, N is the number of data points, correlation co-efficient (R), which is relative measure of quality of fit, standard error of estimate (Se) representing absolute measure of quality of fit, Fischer’s value (F), which represents F-ratio between the variance of calculated and observed activity, and chance statistics assuring that the results are not merely based on chance correlations, figures given in the parentheses with ± sign in the model are standard error associated with the regression coefficients, chance is the ratio of the equivalent regression equations to the total number of randomized sets; (a chance value of 0.001 corresponds to 0.1% chance of fortuitous correlation).

All the QSAR models are significant at 99% level, which is shown by their greater calculated value in comparison to the tabulated one (given in the parenthesis that follows the calculated values, in each model). Accuracy in the analysis is shown by low values of standard error of estimate. The statistical details of the QSAR model given above speak for its good statistical quality. The R value is above 0.9, which suggest that a good percentage of the total variance in biological activity is accounted by the model. Low value of standard error of estimate (< 0.5) indicates the accuracy of the statistical fit. All the values of the t-statistic are significant which confirms the significance of each descriptor. 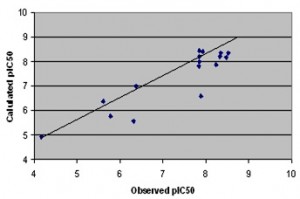 CONCLUSION: Summarizing the above discussion, the present study gives rise to QSAR with good statistical significance and predictive capacity for HIV-1 non nucleoside reverse transcriptase inhibitory activity of TIBO derivatives. For the dataset of 16 analogues with well-defined activity, the HIV-1 non nucleoside reverse transcriptase inhibitory potency appears to be influenced by structural components.

The interpretation of the generated QSAR revealed that increased HIV-1 inhibitory potency of TIBO derivatives could be achieved by increasing solvent accessible surface area of the molecules and by Minimal Projection Radius Å2 in the molecule.