Aim: The aim of the present study was to evaluate lead toxicity on the male reproductive system during developing period of neonates.

Result: Oral supplementation of antioxidants vitamin C and E with lead slightly recovered these adverse effects and retained normal function but independently they also induced obstruction in development of testis.

INTRODUCTION:In recent years, there has been growing concern on the deleterious effects that many chemicals may have on male reproduction.

These substances may act as testicular toxicants and correspond to different compounds, which are related to social habits, life conditions, working hazards or use of drugs and medicines 1, 2, 3.

Lead is amply distributed in the environment and alters the physiology of many organic systems, including the male reproductive system. In the present study mouse as an experimental design was used to determine the effect of lead poisoning on developing testis.

Lead toxicity is known to humanity since ancient times and mentioned in documents left by the Greeks, Romans and Arabs, and even the Egyptians 4. Lead is a wide-spread environmental pollutant, which has been implicated in toxic processes that affect several organ systems in man and animals 5. Developmental toxicology is an increasingly important area of toxicology. It encompasses the study of hazard and risk associated with exposure to toxicants during prenatal development and has been expanded by the U.S Environmental Protection Agency to include effects on the developmental process until the time of puberty, i.e., until the completion of all developmental processes.

Lead affects both the male and female reproductive systems. In men, when blood lead levels exceed 40 μg/dL, sperm count is reduced and changes occur in their morphology and motility. A pregnant woman's elevated blood lead level can lead to miscarriage, prematurity, low birth weight and problems with development during childhood. Lead is able to pass through the placenta and breast milk and blood lead levels in mothers and infants are usually similar. A foetus may be poisoned in utero if lead from the mother's bones is subsequently mobilized by the changes in metabolism during pregnancy. Increased calcium intake in pregnancy may help mitigate this phenomenon 6.

When a pregnant mouse has an elevated blood lead level during gestation and lactation, it can easily be transferred to the foetus through the placenta. The pre and postnatal exposure of lead not only disturb the histology of gonads in neonates but also create major alteration in morphology, histology and physiology of gonadal axis in adult male. Lead is capable of reaching embryonic tissues at different period of gestation and disturbs the normal development of testis, which disrupts the process of spermatogenesis at the time of puberty. Dorostghoal et al., 7 studies was designed to determine short and long term developmental effects of maternal exposure to different doses of lead acetate during lactation on testicular structure in offspring Wistar rats. They that testicular parameters decrease in offspring Wistar rats in maternal exposures of lead acetate at doses above 100 mg/kg/day.

Antioxidants are the main defence factors against oxidative stress induced by free radicals 8. The production of ROS by sperm is a normal physiological process, but an imbalance between ROS generation and scavenging activity is detrimental to the sperm and associated with male infertility 9. Physiological levels of ROS influence and mediate the gametes 10, 11, 12 and crucial reproductive processes, such as sperm-oocyte interactions 13, implantation and early embryo development 14.

Vitamin C (ascorbic acid, ascorbate) represents the major water-soluble antioxidant in plasma and can also act as an antioxidant by reacting with free radicals. Vitamin E includes a group of lipid soluble compounds, tocopherol and tocotrienols that act as antioxidants defending the organism against oxidative stress. Ascorbic acid (Vitamin C) has been studied extensively in modulating lead intoxication. Ascorbic acid is known to have number of beneficial effects against lead toxicity. It acts mainly as an antioxidant molecule and its beneficial effects could be attributed to its ability to complex with lead 15.

However, there are limited data regarding the effects of the vitamin C and E on physiology of developing male reproductive system in Swiss mice. Therefore, the objective of the present study was, to test the hypothesis that different dose levels of vitamin C and vitamin E might effectively protect against heavy metal lead or they might induce their side effects.

Animals:  A total number of 30 adult Swiss male albino mice of 7- 9 weeks old and weighing 25–30 gm were used in this study. Mice were housed in metal cages with soft rice husk for bedding and fed on a commercial diet and water ad libitum. The experimental protocols were approved by the Institutional Animal Ethical Committee of the University NO.CS/Res/07/759.

Experimental Design: Female and male mice in the ratio of 4:1 were kept in cages and the day on which sperm was detected in the vaginal smear was counted as day 1 of pregnancy.

The pups from each of the groups were randomly selected and were sacrificed on PND 1 and 21.

Control testis from PND 1: In the present investigation the histopathological alterations were observed in the testis caused by lead acetate, vitamin C and E alone. Slight prevention was observed in combination of vitamins with lead on PND 1 and PND 21. Several gonocytes can be seen in the centre of the seminiferous tubule but they were not arranged in regular manner. The seminiferous tubules were separated by large number of interstitial tissue made up of mainly other developing cells (Plate. 1, Fig. 1).

In the combination of lead with vitamin C (8 + C) showed reduced area of interstitial tubular space in between seminiferous tubules. Atrophy of gonocytes occurred in tubules. 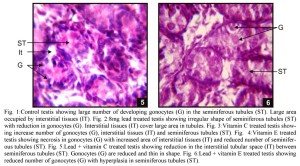 DISCUSSION: The present study showed that daily doses of lead acetate cause significant alterations in the histology of the mice testis on different developing period. The testicular tissue architecture of lead treated animals on both days showed serious damages within the seminiferous tubules. Lead treated animals showed reduction in seminiferous epithelium, an empty lumen with reduced number of luminal spermatozoa.

These findings were in agreement with Moniem et al., 16 who showed that lead exposure caused progressive vascular, tubular and interstitial testicular damage. Dorostghoal et al., 17 reported that degree of reduction in the testis volume, seminiferous tubules diameter and increase in germinal epithelium height from early weeks to 60 days of age. Garu et al., 18 showed that daily doses of lead acetate cause a significant decrease in the average body weight and significant alterations in the histology of the mice testis.

In lead treated groups on PND 21 many seminiferous tubules became thin and many spermatogonia and spermatocytes were disappeared when compared with control. Corpas et al., 19 reported that significant alterations were observed in seminiferous tubules morphology and significant reduction in germinal epithelium cells of pups which chronically exposed to lead.

Similar results were obtained by Sharma et al., 20 reported that high dose of lead acetate affected the developing seminiferous tubules and changed their shape and size and decreased the size of tubules. The hexagonal shape of tubules and large gaps were detected between tubules in comparison to control.

The present study revealed that lead exposure caused progressive vascular, tubular and interstitial testicular space damage in between seminiferous tubules. These findings were in agreement with Sharma and Garu 21 who reported that different doses of lead impaired the development of various components of testis. The gestational exposure may lead to significant histopathological and functional disturbances in adult. Corpas et al., 19 showed that lead acetate causes decrease in the diameter and epithelial thickness of rat seminiferous tubules.

Lead intoxication during gestation and lactation induce some morphological changes in pups right from birth to lactation. The histopathological profiles of developing testis were altered by lead. When animals treated with lead and lead + vitamins they showed histopathological alteration in various components of developing reproductive organs in comparison to control and vitamins treated groups. Although, vitamins are capable for protecting the damage in comparison to lead and lead with vitamins treated groups.

The antioxidant like ascorbic acid is known as a chelating agent in treatment of lead toxicity, and it prevent sperm from motility 22, 23. Investigations have confirmed that the simultaneous administration of thiamine (vitamin B1) and ascorbic acid was more efficient in protecting or treating the experimental lead intoxication than either of them individually 24.

In the present study vitamin C treated testis showed reduction in various stages of developing spermatogonial cells but their cell populations was quite high as compared to lead and lead + vitamins treated groups. These finding were in agreement with the hypothesis reported by Upasani et al., 25 who reported that the testicular damage in mice was also improved significantly when treated with ascorbic acid and thiamine.

Traditionally, vitamin E is called an anti-sterility vitamin 26 and is associated with normal function of the male reproductive system 27. Vitamin E supplementation in diet had increased the thickness of germinal epithelium reported by Hailing 28 which is similar with the findings of Garcia-Gil et al., 29. Zhu et al. 30 also reported the thickness of germinal epithelium in Boer kids was higher with vitamin E than in control, but differences between the control and treated groups were not significantly reported.

CONCLUSIONS: In conclusion, the present study indicates that the histopathological evaluation of testis revealed that lead produces the severe histopathological changes in developing testis, which may results in a significant reduction of the reproductive capacity during adulthood. Oral supplementation of antioxidants vitamin C and E with lead slightly recovers these adverse effects and retains normal histology. Supplementation of high doses of vitamins during gestation and lactation are not beneficial because they also generate some alterations in developing gonads.