Natural resources in general and plant materials in particular are receiving more attention due to their safety as pharmaceutical excipients. Present work assessed the combination potential of natural hydrophobic resin, rosin, and synthetic polymer ethyl cellulose to mask the abhorrent inherent taste of ambroxol hydrochloride, by microencapsulation technique, and its possibility to formulate as a fast dissolving dosage form. Being of natural origin, rosin and its derivatives are biodegradable and biocompatible. Although It has excellent film forming property the native rosin films are brittle and break easily upon handling. The film forming properties of rosin was modified by substituting  a part with ethyl cellulose.The prepared rosin-ethyl cellulose composite microspheres by emulsion solvent evaporation technique possessed good sphericity, smooth surface morphology, uniform and narrow size distribution (10-90 µm), when analyzed by scanning electron microscopy. PEG 400 was used as plasticizer because of its hydrophilicity, biocompatibility and their excellent plasticizing activity. Method of preparation has influenced the particle size and drug loading efficiency. Drug-polymer compatibility was confirmed by Fourier transform infrared spectroscopy and thin layer chromatography. DSC studies revealed that the drug was molecularly dispersed inside the microspheres in the form of solid solution. Sensory studies in healthy human volunteers indicated that the taste and palatability were significantly improved by microencapsulation. This study demonstrated that rosin could be a right choice in developing patient favored formulations for bitter drugs and can be utilized in fast disintegrating dosage forms as well.

INTRODUCTION: Plant materials contributed significantly to the repertoire of medicines since ancient times, are screened for their use as pharmaceutical adjuvant too. Many synthetic, semi synthetic and naturally occurring polymers have been found favor as release retarding components in microsphere preparation. Some of these naturally occurring materials include lipids, waxes, albumin, gelatin, polysaccharide like alginate and chitosan 1-3.

In the present study, we report the novel application of a natural hydrophobic resin, rosin as taste masking agent in the oral drug delivery system. Rosin, is a solid resin obtained from Pinus palustris Miller and other species of Pinus linnae.It is composed of approximately 90% of rosin acids, prominent ones include abietic acid and have a typical molecular formula C20H30O2. The oral toxicity (LD50) studies on  guinea pigs have proved rosin being practically nontoxic 4.

It has been investigated for microencapsulation, film forming and coating properties, matrix materials in tablets for sustained and controlled release 5-7.In recent years the importance of patient compliance and overall economics of healthcare is been increasingly recognized. Orally disintegrating tablets offers various advantages to the end users. However, taste masking is highly desirable but challenging while developing oral disintegrating formulations of bitter drugs. One of the feasible techniques to accomplish the taste masking is by preparing the microparticles. Review on the literature revealed that majority of the polymers used for taste masking are synthetic, enteric in nature and require organic solvent based microencapsulation technique.

The glass transition temperature (Tg) of rosin is less than 30oC and thus it is difficult to process and use at room temperature. Although it has excellent film forming property native rosin films are brittle and break easily upon handling 8. However, rosin can be modified into a useful film former for various pharmaceutical applications 9. The main use of ethyl cellulose in oral formulations is as hydrophobic coating agent for tablets and granules 10-12. Ethyl cellulose coatings are used to modify the release of a drug, to mask an unpleasant taste, or to improve the stability of a formulations.

In the current study, we have modified the film forming properties of rosin by substituting a part with ethyl cellulose. We have also selected PEG 400 as plasticizer because of its hydrophilicity, bio-compatibility and their excellent plasticizing activity. In addition modification may also improve its safety and stability in oral formulations.

Another objective of the study was to assess the viability of these microspheres as a taste masking agent in fast disintegrating formulation, using highly bitter ambroxol hydrochloride as model drug.

where, E is the extension to break of the film and Lo is its original length. The tensile strength, B, of tested films was determined using the following equation 15:

where, F is the break force of the film and A is its crossectional area. The modulus of elasticity (Y) of the film was calculated from Hook's law 16:

The tensile strength, percentage elongation and modulus of elasticity of selected ratio was compared with standard taste masking polymer, Eudragit®E-PO in Table 1. All the results were reported as the mean (±S.D) of five replicates.

Preparation and Evaluation of Microspheres:

Less than 2%w/v of ethyl cellulose resulted in rosin films which are brittle and non-flexible. Increasing the concentration above 2%w/v resulted in migration and deposition of polymeric material to the periphery of the film. The resulting films non-homogenous, visually showed an irregular distribution of polymer, assessed by varying thickness at different points. Based on the properties of the different ratio strengths prepared films, we have selected rosin: ethyl cellulose 10:2 (%w/v) for further evaluation. Films produced from the plasticizer free solutions containing the polymer were homogenous, smooth and translucent but slightly brittle.PEG 400 containing polymer films are soft, elastic, tough, therefore fulfill the desirable characteristics of a film former. The results obtained in plastic tensile tests of free films are shown in Table 1. It is seen from the results that the tensile strength and modulus of elasticity of prepared films are lower compared to standard Eudragit L-100®. The percentage elongation of the prepared films is very high compared to the standard polymer, suggesting that the prepared polymers form films have all the desirable attributes of a film former.

Surface Morphology and Water Vapour Transmission Rate: Scanning electron micrograph had shown that prepared films are smooth and uniform. Moisture absorption of polymeric films affects both the mechanical properties and drug release pattern. Water vapour transmission rate is very low (5.12 X 10-10g cm/cm2/24 hr) compared to the standard polymer, Eudragit®E-PO. Moisture absorption capacities under different humidity conditions revealed that the moisture uptake is minimum due to their hydrophobic characters 22. Such low values of WVTR for the free films of the prepared polymers are indicative of their moisture protective ability 23.

The influence of concentration of polymer on the particle size was determined and was recorded in Table 2. It was found that particle size was minimum with 1:7 ratio. The encapsulation efficiencies with various ratios of drug and polymer were found to be in the range of 70-95%.

TABLE 2: EFFECT OF THE DIFFERENT DRUG: POLYMER RATIO ON THE PARTICLE SIZE OF COMPOSITE MICROSPHERES

TABLE 3:  EFFECT OF POLYMER CONCENTRATION ON THE AMBROXOL HYDROCHLORIDE LOADING OF COMPOSITE MICROSPHERES 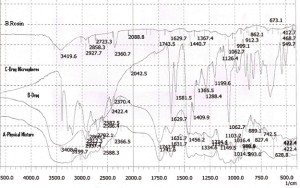 SEM photographs were taken for the composite microspheres prepared by emulsion solvent evaporation technique and are depicted in Fig. 2. The pictures revealed that the prepared  rosin-ethyl cellulose microspheres were found to be smooth and spherical in shape. The physical state of the drug inside the microspheres was assessed by differential thermal analysis.

DSC thermograms of ambroxol, physical mixture of rosin and ethyl cellulose (1:1), blank microspheres and drug containing microspheres are shown in Fig. 3. Under the experimental conditions, no DSC peak was observed for the rosin and drug free microspheres. For the drug loaded microspheres the endotherm peak was similar to that of drug. 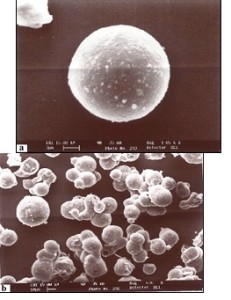 FIG. 2: SCANNING ELECTRON MICROGRAPH OF (a) SINGLE AND (b) GROUP OF COMPOSITE MICROSPHERES (DRUG: POLYMER 1:7) BY EMULSION SOLVENT EVAPORATION TECHNIQUE 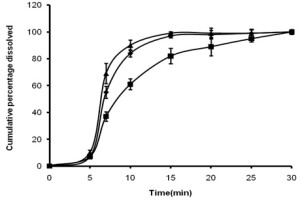 The evaluation of the unpleasant taste of ambroxol hydrochloride revealed that the palatability and taste of the drug were significantly improved by the microencapsulation. This study suggests that prepared fast disintegrating tablets have a good overall preference score.

Further, the dissolution profile obtained from the formulated fast disintegrating tablets shown that the release rate of ambroxol was not compromised by the tablets prepared using rosin loaded microspheres whereas it masked the bitterness of the drug. Thus the data observed in the current investigation suggests that modified natural polymer like rosin is an ideal polymer for taste masking the drugs and could be used for orally disintegrating solid dosage forms.

CONCLUSIONS: Composite microspheres containing ambroxol hydrochloride in micrometer size ranges were prepared successfully by w/o solvent evaporation technique, which was found to mask the taste of the drug significantly. The delay in drug release is only sufficiently long enough to pass through the oral cavity, followed by complete and immediate release in gastric fluid. Therefore, it is a viable option to include water soluble rosin coated drug in a fast dissolving dosage form. The ongoing investigations are in progress with viability of this combination to use it as an aqueous coating system.