ABSTRACT: A simple, specific, precise, and efficient method for the Simultaneous estimation of Metformin HCl and Voglibose tablet by a Reverse Phase-High Performance Liquid Chromatography method is developed and validated. Selected mobile phase was in a combination of acetonitrile: buffer pH- 6.5 in the ratio of 62:38. Optimized column is a stainless steel column packed with base octa decylsilyl silica gel of 250X4.6mm and at 254 nm wavelength for metformin and voglibose detection by Spectrofluorimeter and excitation wavelength at 350nm and emission wavelength at 430nm. In our study the validation of analytical method for determination of Metformin and voglibose tablet formulation was performed in accordance the parameters including-system suitability, specificity, linearity of response, accuracy, precision (reproducibility & repeatability), robustness (change of wave length±2 nm). The method is validated according to ICH guidelines.

INTRODUCTION: Metformin HCl (Fig. 1) 1, 1-Dimethylbiguanide hydrochloride 1 is an oral anti-diabetic in the class and has an empirical formula C4H12N5Cl. It is the drug of choice for the treatment of. It improves hyperglycemia primarily through its suppression of hepatic glucose production (hepatic gluconeogenesis) and activates AMP- activated protein kinase ﴾AMPK﴿which is required for the inhibitory effect for the production of glucose by liver cells 2-4. Voglibose (Fig. 2) has an empirical formula [C10H21NO7] 3, 4-Dideoxy-4-[2-hydroxy-1-(hydroxyl methyl) ethyl] amino-2-c-(hydroxymethyl).  As an alpha-glucosidase inhibitor, the compound exerts its activity within the gastrointestinal tract of humans.

As an alpha-glucosidase inhibitor, the compound exerts its activity within the gastrointestinal tract of humans. The drug delays glucose absorption and thus, reduces the post-prandial blood glucose level. Its combination has attracted considerable interests due to its wide range of therapeutic and pharmacological properties, including its excellent inhibitory activity and its action against hyperglycemia 5-7.

In the present work, an attempt was made to provide a newer, simple, accurate and low cost  post column derivatization of spectrophotometric and there derivative method and one HPLC method for the effective quantitative determination of Metformin HCl and Voglibose as an active pharmaceutical ingredient as well as in pharmaceutical preparations without the interferences of other constituent in the formulations. Chromatographic separation was performed on a Shimadzu chromatographic system equipped with a LC-2010 variable wavelength programmable UV/Visible detector -2550 and Fluorescence DetectorLC-20AT. 20µl of injection volume, stainless steel column of C18:150X4.6mm was used for separation.

Mobile phase consisting of a mixture of potassium dihydrogen phosphate and Sodium di hydrogen orthophosphate buffer pH -6.5: acetonitrile (38:62% v/v) was delivered at a flow rate of 1ml/min. The mobile phase was filtered through a 0.45 μ membrane filter and sonicated for 5min. Analysis was performed at ambi-ent temperature. Since voglibose only absorbs UV in the low wavelength region, it cannot be directly detected with high sensitivity. Taurine and sodium periodate were used for the derivatization of voglibose 8-10. It is validated as per ICH guidelines 11.

MATERIALS AND METHODS: Pure sample of Metformin HCl and Voglibose got as a gift sample by the Micro labs, Hosur. Acetonitrile and water used were of HPLC grade. All other reagents used in this study were of AR grade.

Preparation of Sample Solution: 20 tablets were weighed, average weight was calculated and quantity equivalent to 5 mg of voglibose and metformin were taken and transfer in to 500 ml V.F. Add 350 ml of buffer and sonicate for 30 min & make up with diluent. And filter through 0.45µ membrane filter paper.

Standard stock solution-A: Accurately weighed 60mg of Voglibose working standard and transfered in to a 100ml volumetric flask and dissolved with diluent and make up the volume with diluent . A  placebo of 145mg  was added at the level of 50mg to 150mg of metformin  and standard stock solution-A  5 to 15ml dissolved in water sonicate about 30min to dissolve the content and made up to 100 ml. Filter the solution through 0.45µ membrane filter. The contents were determined from the respective chro-matograms.

The concentration of the drug product in the solution was determined using assay method. The recovery procedure was repeated 3 times and % RSD was calculated by using the following formula. The contents of metformin and voglibose are shown in table the lower values of %RSD of assay indicate the method is accurate. The mean recoveries were in range of 99.8-101.20 % which shows that there is no interference from excipients (Table 5). The Recovery curve for metformin and voglibose are shown in figure 5 & 6.

The relative Standard deviation for the assay of six sample preparations of Metformin HCl and Voglibose was found 0.19% and 0.99%.

Amount of Metformin HCl in mg: 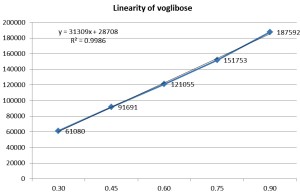 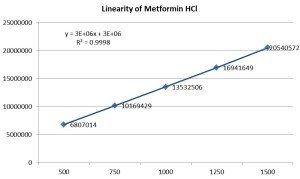 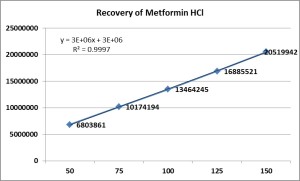 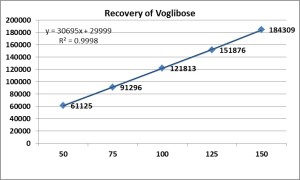 Result: The percentage of recovery of Metformin HCl and Voglibose was found 97.0% to 103.0.

Result: The stability of analytical solution %RSD of Metformin HCl and Voglibose was found 0.46 and 0.57 respectively.

CONCLUSION: The HPLC method is simple, specific, precise, linear, sensitive, and also system suitability. The results obtained on the validation parameter met the respective acceptance criteria. The method was found to have suitable application in routine laboratory analysis and with high degree of accuracy and precision. It is also used in routine quality control of raw materials as well as formulations containing the compound.