ABSTRACTA new, simple, precise, rapid and accurate RP-HPLC (Reverse Phase – High Performance Liquid Chromatography) method has been developed for the simultaneous estimation of Atenolol (AT) and Amlodipine Besylate (AB) in bulk and in tablet formulations. The chromatographic separation was achieved on Agilent technologies 1200 series HPLC using Inertsil C18, 5 mm, 250 mm x 4.6 mm column maintained at ambient temperature with mobile phase, Buffer: Acetonitrile: Methanol (4:3.5:2.5 v/v/v), flow rate 1.0 ml/min, load volume 10 μl and a run time of 10 min. The UV detection was performed at 225 nm. Buffer was prepared with Triethylamine and adjusted pH to 3.0 with Ortho-Phosphoric Acid. The retention time and mean recoveries obtained for AT was 2.23 min and 100.1%, for AB was 5.97 min and 100.4% respectively. Linearity response was established over the concentration range of 50-150 μg/ml for AT and 5-15 μg/ml for AB. The correlation coefficient for AT and AB was 0.9992 and 0.9998 respectively. The recovery studies ascertained the accuracy of proposed method and the results were validated as per ICH guidelines. This novel method can be used for the routine quality control of both drugs in combination in tablet dosage form

INTRODUCTION: Atenolol, 4-[2'-hydroxy-3'-[(1-methyl ethyl) amino] propoxy- benzene acetamide is an odorless white powder, sparingly soluble in water, soluble in ethanol/methanol and practically insoluble in ether is used as an antihypertensive and an antiarrhythmic agent. AT is β1-selective antagonist. It binds at β1 adrenergic receptors in the heart and vascular smooth muscle, inhibiting sympathetic stimulation.

AT tablet is official in I.P 3, B.P. 4 and U.S.P. 5. AB tablet is official in I.P. and E.P. 6. It is official as Active Pharmaceutical Ingredient in B.P. 7. Literature survey revealed the availability of several methods for the estimation of AT (non aqueous titration, colorimetry, HPLC, UPLC methods) and AB (colorimetry, HPLC, HPTLC, LC-MS/MS, electrochemical methods) alone and in combination with other drugs 8-11. But it was found that there were very few methods reported for the simultaneous estimation of AT and AB from their combination dosage forms 12. Therefore, a successful attempt was made to develop a new, rapid and selective method for simultaneous estimation of AT and AB from tablet dosage form. The newly developed method was validated as per ICH norms to confirm the reproducibility and wide applicability of the method. 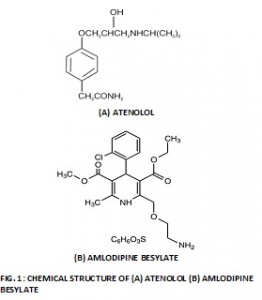 FIG. 1: CHEMICAL STRUCTURE OF (A) ATENOLOL (B) AMLODIPINE BESYLATE

Preparation of mixed stock solution: An accurately weighed 10 mg each of AT and AB working standards were transferred into a 100 ml volumetric flask. 20 ml of methanol was added into it and sonicated for awhile for dissolving the drugs. The flask was made up to 100 ml with methanol so as to get a concentration of 100 µg/ml.

Preparation of mixed standard solution: From the stock solution, 1ml was transferred into a 10 ml volumetric flask and volume was made up to mark with methanol to get a final concentration of 10 µg/ml. The resulting solution containing 10 µg/ml of AT and 10 µg/ml of AB were scanned in UV- Visible spectrophotometer from 400-200 nm to determine the wavelength of maximum absorption of both the drugs in combination. Both drugs in combination showed maximum absorption at 225 nm. The values are shown in table 1 and the spectra of combination of AT and AB was appended in Fig. 2. 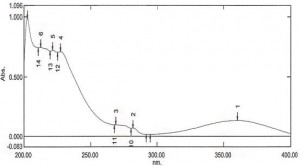 Optimized HPLC conditions: Inertsil C18 (250 mm x 4.6 mm, 5mm) column maintained at ambient temperature was used as stationary phase. An isocratic mobile phase constituting Triethylamine Buffer (pH adjusted to 3.0 with Ortho-Phosphoric Acid), Acetonitrile and Methanol in ratio 4:3.5:2.5 (v/v/v), at a flow rate of 1.0 ml/min was used. The mobile phase was filtered using 0.45 µm filter paper and degassed for 10 min by sonication. Samples of 10 ml were injected into the HPLC system and the effluents were analyzed at 225 nm. The runtime was 10 min.

Standard Stock Solution: Standard stock solution was prepared by transferring 14 mg of AB working standard into 20 ml volumetric flask, added methanol and sonicated for 5 min for dissolving the drug and volume was made up with mobile phase.

Working Standard Solution: Working standard solution was prepared by transferring 10 mg of AT into 100 ml volumetric flask, added methanol and sonicated for 5 min for dissolving the drug. 2 ml of AB stock solution was added and volume was made up with mobile phase.

Sample preparation for Tablet Analysis: Tablet powder equivalent to weight of one tablet was accurately weighed and transferred into 100 ml volumetric flask, 60 ml of mobile phase was added and sonicated for 15 min; volume was made up with mobile phase. Solution was filtered through 0.45µ nylon filter. 5 ml of the filtrate was diluted to 25 ml with mobile phase. 10 µl of the blank, placebo, standard and sample solution were injected separately into the chromatographic system and chromatograms were recorded and the peak areas were measured. A typical chromatogram of AT and AB was appended in Fig. 3. 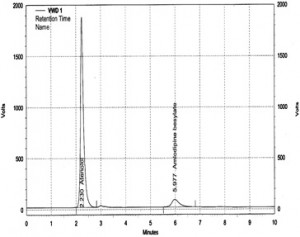 Method Validation: Method validation is the process to confirm that the analytical procedure employed for a specific test is suitable for its intended use 13. The newly developed RP-HPLC method was validated as per International Conference on Harmonization (ICH) guidelines for parameters like system suitability, linearity and range, precision (repeatability), intermediate precision (ruggedness), specificity, accuracy and robustness 14-16.

System suitability testing: A standard solution was prepared using AT and AB working standard as per the test method and was injected six times into the HPLC system. The parameters namely USP plate count, peak asymmetry factor and resolution for the standard solutions were calculated and the values were given in table 2.

Specificity (Sensitivity or Selectivity): Specificity was performed to detect the presence of interference peak (blank and placebo peaks) at the retention time of the analyte peak. The interference of placebo was detected by preparing samples by taking the placebo equivalent to about the weight in portion of test preparation as per the test method and were injected into the HPLC system. The interference of blank was detected by injecting mobile phase as per the test method.

Accuracy (Recovery or Trueness): The accuracy of the test method was determined by preparing recovery samples (spiking placebo with known quantities of AT and AB standard) at the level of 50%, 100% and 150% of targeted concentration. The recovery samples were prepared in triplicate at each level. The samples at different levels were chromatographed and the percentage recovery for the amount added was estimated. The precision of the recovery at each level was determined by computing the %RSD of triplicate recovery results. The values were given in table no. 5.

Linearity: The linearity of detector response for AT and AB was determined by preparing a series of solution of AT and AB working standards over the range of 50% to 150% of targeted concentration. These solutions were injected into the chromatographic system and response area was recorded. The regression equation for AT and AB were found to be y = 20158x+33346 and y = 20124x + 453.44 with correlation coefficient 0.9992 and 0.9998, respectively. A linearity plot for AT and AB was shown in Fig. 4 and 5, and the correlation co-efficient was evaluated. The values were given in table 6.

System suitability parameters proved that the proposed method suits for the simultaneous estimation of AT and AB. After various trials performed, chromatogram for AT and AB was found satisfactory on Inertsil C18, 5mm, 250 mm x 4.6 mm, using mobile phase composition of buffer: acetonitrile: methanol (4: 3.5: 2.5). Drug peak was found to be symmetrical as observed from asymmetry factor of 1.46 for AT and 1.36 for AB. Resolution of the proposed method was found to be satisfactory.

Sensitivity of the method was good and also linearity was observed over a wide concentration range of 50-150 µg/ml for AT and 5-15 µg/ml for AB. Accuracy of the method was determined by recovery with spiked concentration of pure drug at five levels for AT and AB. Recovery of drug was well within the acceptance limits of 97-103%. Method was robust and rugged as observed from insignificant variation in the results of analysis on changes in flow rate, temperature, filter and analysis being performed by different analysts, in different days on different systems using different columns respectively.

CONCLUSION: From the results obtained, it was observed that the developed method was proven to be specific, precise, linear, accurate, rugged and robust and is suitable for its intended purpose. So the work performed gives documented evidence, that the analytical method for the simultaneous estimation of AT and AB by RP-HPLC in tablet dosage forms will consistently analyze these drugs quantitatively and can be used for routine analysis in quality control and R&D laboratory.

ACKNOWLEDGEMENTS: Blessen Philip is thankful to Mr. Madhu E. Nicholas, FR & D Manager, staffs in AR & D and QC of M.S.N. Laboratories Ltd., Formulations Division, Bollaram, Hyderabad, for providing necessary facilities and support to carryout this research and a special thanks to Dr. S. Meena, Head of the Department, and guide Dr. M. Sundarapandian, Department of Pharmaceutical Analysis, K.M. College of Pharmacy, Madurai, for encouragement, valuable guidance and granting permission to do this work in industry.