INTRODUCTION: It is necessary to find the content of each drug either in pure or single, combined dosage forms for purity testing. It is also essential to know the concentration of the drug and it’s metabolites in biological fluids after taking the dosage form for treatment. The scope of developing and validating analytical methods is to ensure a suitable method for a particular analyte more specific, accurate and precise. The main objective for that is to improve the conditions and parameters, which should be followed in the development and validation.

This increased gastrointestinal motility can facilitates the movement of acid contents further down in the intestine preventing reflux esophagitis and thereby controlling nausea and vomiting 4. It is official in B. P. 3. A survey of literature reveals that HPLC method is not available for simultaneous estimation of the drugs like Ranitidine hydrochloride and Domperidone in combined tablet dosage form. Even though very few methods such as UV 5-12, HPLC 13-17 and HPTLC 18 are available for  estimation of above drugs either in single or combination with other drugs, many of them suffer from one disadvantage or the other, such as low sensitivity, lack of selectivity and simplicity etc.

Preparation of standard solutions: Standard solutions of Domperidone and Ranitidine hydrochloride were prepared in mobile phase. Accurately weighed and transferred 10 mg Domperidone reference standard to 10 ml volumetric flask (A) the volume was made up to the mark with mobile phase. Take 1 ml from (A) into a 10 ml volumetric flask (B) and added accurately weighed 16.8 mg Ranitidine hydrochloride reference standard, the volume was made up to the mark with the mobile phase. Appropriate volume from this solution was further diluted to get desired concentration levels according to the requirement. Final solution filtered through a 0.2 µm membrane filter and 20 µl of this solution was injected for HPLC analysis.

Preparation of Sample Solutions: Ten tablets were weighed and finely powdered, tablet powder equivalent to 10 mg of Domperidone and 168 mg of Ranitidine hydrochloride accurately weighed and transferred to 100 ml volumetric flask. This mixture was subjected in magnetic stirrer for 60 minutes for complete extraction of drugs using magnetic beads and the solution was made up to the mark with mobile phase.

Appropriate volume from this solution was further diluted to get desired concentration level according to the requirement. Final solution filtered through a 0.2 µm membrane filter and 20 µl of this solution was injected for HPLC analysis.

Assay Method: Optimized chromatographic condition, a steady baseline was recorded, the standard solution was injected and the chromatogram was recorded. The retention time of Ranitidine hydrochloride and Domperidone was found to be 2.4 and 7.3 minute respectively. This procedure was repeated for the sample solution. The results obtained from standard and sample is shown in table 1.

Concentrations of Ranitidine hydrochloride and Domperidone in the formulation were calculated by comparing AUC of the sample with AUC of the standard. Chromatograms of assay are shown in fig. 2. System suitability parameters are shown in table 2. 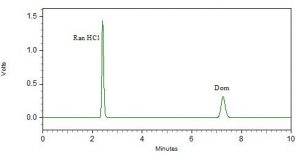 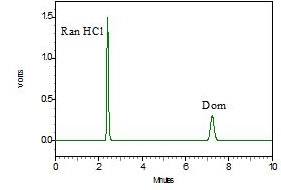 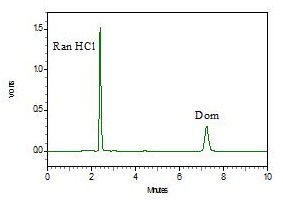 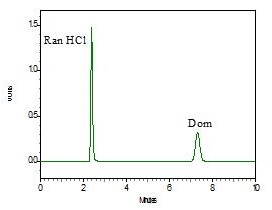 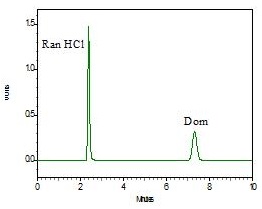 Validation of Proposed Method: Validation (evaluation of suitability) of an analytical technique is a procedure aimed at obtaining experimentally justified evidence of the ability of this technique to give results characterized by the required accuracy and precision. Typical analytical parameters used in assay validation include: -

Precision: The precision (repeatability, reproducibility) of an analytical procedure is evaluated in terms of the standard deviation (SD) and relative standard deviation (% RSD) determined in a series of measurements. The precision was studied by preparing the standard solution of 25 ppm and 420 ppm of Domperidone and ranitidine hydrochloride respectively and injected repeatedly for six times. The obtained results are shown in table 3.

Accuracy: The % recovery has been studied and established within the range of 80 % to 120 %. The spiking study for each concentration along with amount recovered and calculation of % recovery is shown in table 4.

The response obtained for the various concentrations is plotted and observed to be linear (correlation coefficient – 0.9999 for ranitidine hydrochloride and 0.9986 for Domperidone). The graphical representation of accuracy studies is depicted in figure 3 and accuracy data is shown in table 5. 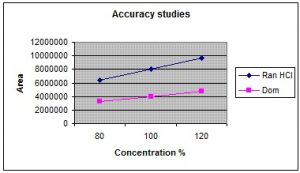 Linearity: The linearity of the method was studied at six concentrations (%) of 150, 125, 100, 75, 50, and 25. The obtained response was linear which apparently indicates the capability of method to reproduce/repeat the results within the linear range, consistently meeting the standard norms for method validation (ICH guidelines on validation analytical methods, Q2B). The results obtained are shown in table 6. The response obtained for each of the concentration is plotted by taking % concentration on x-axis and area on y-axis. The graphical representation for linearity studies is depicted in figure 4. 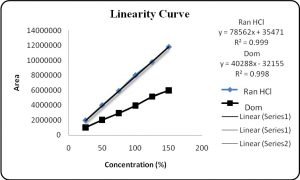 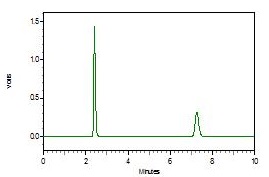 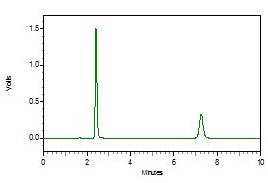 Observing the stability studies, we were concluded that drugs should be stable for three day and on seventh day both drugs show change on peak shape and some in peak area.

LOD (Limit of Detection): Adjust the instrument sensitivity; record the instrument noise level in the elution time range of drugs. When the instrument is in the most sensitive condition, calculate the average noise. (Test for twice to get mean value). Accurately weighed and transferred 10 mg Domperidone standard into a 10 ml volumetric flask (A) the volume was made up to the mark with mobile phase. Take 1 ml from (A) into a 10 ml volumetric flask (B) and added ranitidine hydrochloride standard 16.8 mg the volume was made up to the mark with the mobile phase. Appropriate volume from this solution was further diluted to get appropriate concentration level according to the requirement. Inject 20 µl and record the peak height of drugs, calculate the ratio of peak height to noise (S/N) the sample concentration

with signal to noise ratio (S/N) near is the LOD concentration. LOD result is shown in table 8 and LOD chromatograms are shown in fig. 6.

RESULTS AND DISCUSSION: Summary of method validation for assay of Ranitidine HCl and Domperidone is shown in table 10.

CONCLUSION: The developed RP-HPLC method enables a quantitative determination of Ranitidine hydrochloride and Domperidone in formulations. The application of this method in routine analysis can be justified since easy sample preparation steps are involved using simple reagents and solvents. The validation demonstrated that the procedure is suitable for the intended purpose because the method was considered linear, precise, accurate, and specific. The statistical analysis proves that the method is reproducible and selective for the estimation of Ranitidine hydrochloride and Domperidone in pharmaceutical formulations.