ABSTRACT: A simple and precise method was developed for the assay of azelnidipine from tablet formulation. The solvent system and wavelength were optimized in order to maximize the sensitivity of the proposed method, azelnidipine shows the maximum absorbance at 257 nm. The separation was achieved on HPLC binary gradient system equipped with HPLC 3000 series. The mobile phase was prepared with Methanol: Water (80: 20%v/v) o-phosphoric acid used for the pH adjustment (pH-3). The method was validated for accuracy, precision, linearity, LOD & LOQ of sample solution. Linearity was observed in the concentration range of 20-100 µg/ml & gave mean correlation coefficient 0.998. The developed RP-HPLC method was found to be accurate, precise and was successful applied to a pharmaceutical tablet formulation for qualitative estimation of Azelnidipine.

INTRODUCTION: RP-HPLC involves the separation of molecules on the basis of hydrophobicity. Excellent resolution that can be achieved under a wide range of chromatographic conditions. Chromatographic selectivity can be manipulated through changes in mobile phase characteristics. High recoveries and high productivity. Excellent reproducibility of repetitive separations carried out over a long period of time. Azelnidipine, (±)-3-[1-(diphenylmethyl)azetidin-3-yl] 5 - propan -2  - yl 2 – amino – 6 – methyl – 4 -(3-nitrophenyl) - 1, 4 dihydropyridine - 3, 5 - di carboxylate,  is a new  dihydropyridine  derivative  with  calcium  antagonistic activity. Only limited analytical methods have been reported  for  the  determination  of  Azelnidipine,  which includes  HPLC,  LC-MS  and  LC-ESI-MS. 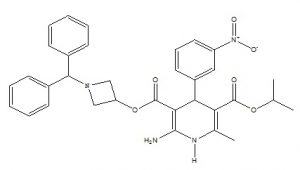 MATERIALS AND METHODS: The pure drug Azelnidipine and marketed formulation were obtained from reputed firm with the certificate of analysis. Methanol was taken from Hexon Lab, Pune India. Standard and sample solution were prepared in diluent of methanol:water (80:20)v/v.

Preparation of standard stock solution: 10mg of azelnidipine was weigh accurately and transferred to volumetric flask of 10 ml capacity. Small amount of methanol was added to dissolve the sample and further the volume made using methanol. This solution was filtered using Whatmann filter paper to remove the undissolved matter. From this solution, 0.75 ml solution was pipette out and placed into 10 ml of volumetric flask. The volume was made upto mark with methanolto give a solution containing 75 µg/ml. further the absorbance of resulting solution was determined at 257 nm.

Chromatographic Conditions: Chromatographic separation was performed on a reverse phase Hexon C8 shield. The mobile phase was a mixture of methanol and water (80:20 % (v/v)). The flow rate of the mobile phase was adjusted to 1.0 ml /min. The detection was carried out at wavelength 257 nm. (Fig. 2) The injection volume of the standard and sample solution was set at 20 μl.

Analysis of Marketed Formulation: Assay was performed by using Tablets of Azelnidipine for the preparation of the sample solution the 10 tablets were used. The powder equivalent to 10 mg of Azelnidipine was weighed accurately and transferred to volumetric flask of 10 ml capacity. Small amount of methanol was added to dissolve the sample and further the volume made using methanol. From this solution, 0.75 ml solution was pipette out and placed into 10 ml of volumetric flask. The volume was made upto mark with methanol to give a solution containing 75µg/ml. 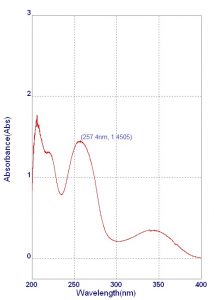 Method Validation: The method was validated for linearity, accuracy, precision and limit of detection, and limit and quantitation. 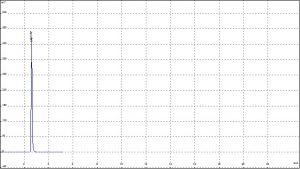 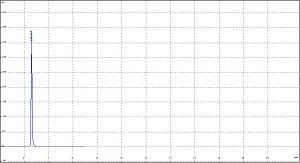 Precision: The instrument precision was evaluated by determining the absorbance of the standard solution six times repeatedly. The results are reported in terms of relative standard deviation. The intra-and inter-day variation for the determination was carried out in triplicate for the standard solution.

Limit of Detection &Quantification: LOD and LOQ were calculated using following equation as per ICH guidelines. LOD = 3.3 × σ/ S and LOQ = 10×σ /S, where σ is the standard deviation of response and S is the slope of the calibration curve.

RESULT & DISCUSSION: In this work HPLC method for assay in tablet formulation was developed and validated. Methanol as diluent was selected which give sharp spectra. 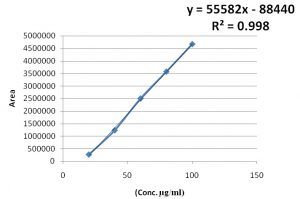 *Based on S.D. of response and slope of Regression curve