This paper describes the analytical method suitable for validation of Candesartan Cilexetil (CDN) by reversed Phase liquid chromatography (RP-LC) method. The method utilized RP-LC (Shimadzu LC-10AT with UV detector) model and Hypersil ODS C-18 (250 x 4.6 mm, packed with 5 micron) column was used for the separation. The mobile phase was consists of acetonitrile:0.05 M KH2PO4 buffer in the ratio of 65:35 at flow rate of 1.5 ml/ min. Validation experiments were performed to demonstrate System suitability, Specificity, Precision, Linearity, Accuracy study. The method was linear over the concentration range of 0.5-400 mg/ml. The method showed good recoveries (99.54- 100.41%) and the recovery studies were carried out by adding different amounts (80%, 100% & 120%) of bulk samples of Candesartan cilexetil along with internal standard were 100.04%, 99.98% & 99.64% respectively. The proposed method is Precise, Accurate, Reproducible and rapid for the determination of Candesartan cilexetil in bulk and their pharmaceutical dosage forms.

Candesartan has much greater affinity (> 10,000 folds) for the AT1 receptor than for the AT2 receptor blockade of the renin-angiotensin system with ACE inhibitors; it does not bind to or block other hormone receptors or ion channels known to be important in cardiovascular regulation. The absolute bioavailability of Candesartan is approximately 40% after an oral solution of Candesartan cilexetil. The relative bioavailability of the tablet formulation compared with the same oral solution is approximately 34% with very little variability. The mean peak serum concentration (Cmax) is reached 3 to 4 hours following tablet intake (table 1).

Hence a RP-LC method was developed and validated as per ICH guidelines. The literature reveals that various methods for the determination of Candesartan Cilexetil and pharmaceutical validations among these methods are LC-MS and LC-MS/MS, HPLC method for Candesartan. Spectrophotometery is generally preferred especially by small-scale industries as the cost of the equipment is less and the maintenance problems are minimal. The method of analysis is based on measuring the absorption of a monochromatic light by colorless compounds in the near ultraviolet path of spectrum (200-380nm). The fundamental principle of operation of spectrophotometer covering UV region consists in that light of definite interval of wavelength passes through a cell with solvent and falls on to the photoelectric cell that transforms the radiant energy into electrical energy measured by a galvanometer.

Apparatus: The analysis was performed by using the analytical balance G285 (Mettler Toledo), pH meter 2100 (Cyberscan), the HPLC used is of Shimadzu LC-10AT with UV detector. Column used in HPLC is of Hypersil ODS C-18 (250 x 4.6 mm, packed with 5 micron) with a flow rate of 1.5 ml/min (Gradient). The mobile phase consists of acetonitrile:0.05 M KH2PO4 buffer in the ratio of 65:35 are degassed in a sonicator for about 10 minutes the injection volume is 20mL and the ultra violet detection was at 256 nm. Acetonitrile HPLC grade was obtained from Ranbaxy Fine Chemicals Ltd.

Preparation of mobile phase: 3.4022 grams of potassium dihydrogen phosphate was dissolved in 500 ml of triple distilled water to get 0.05 M solution and sonicate for 10min.The prepared buffer and Acetonitrile were properly mixed in the ratio of 35:65.

Preparation of sample drug solution for pharmaceutical formulations: Twenty tablets containing CDN of each marketed formulation were taken and powdered. The powder equivalent to 8mg of CDN was dissolved in 8 ml of acetonitrile to get a stock solution of 1 mg/ml and then sonicated for 15 min. This solution was filtered through a Whattman filter paper.  The solution was further diluted stepwise with mobile phase and spiked with required amount of internal standard and diluted with mobile phase to get concentrations with in the linearity range. 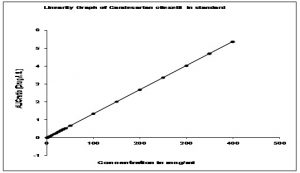 Precision: The precision of each method was ascertained separately from the peak area ratios obtained by actual determination of eight replicates of a fixed amount of drug and internal standard.  The percent relative standard deviation and percentage range of errors (at 0.05 and 0.01 confidence limits) were calculated for CDN and presented in the table 3.

The precision of the assay was also determined in terms of intra-and inter-day variation in the peak areas for a set of drug solutions on three different days.  The intra-and inter-day variation in the peak area ratio of the drug solution to that of internal standard was calculated in terms of % RSD and the results are presented in table 3.

Accuracy: To determine the accuracy of the proposed method, recovery studies were carried out by adding different amounts (80%, 100%, and 120%) of bulk samples of Candesartan Cilexetil along with internal standard (I.S) within the linearity range were taken and added to the pre-analyzed formulation of concentration 20 mg/ml. From that percentage recovery values were calculated. The results were shown in table 4.

Analysis of formulations: The amount of drug present in each pharmaceutical formulation was calculated through peak area ratio of drug to that of internal standard by using the standard calibration curve (concentration in mg/ml was taken on x-axis and peak area ratio on y-axis). The results were shown in Table 6. A typical chromatogram of Candesartan cilexetil with I.S and win formulation was shown in Fig. 3 & 4 respectively.

* Each value is average of five determinations ± standard deviation

CONCLUSION: The proposed method was found to be simple, precise, accurate and rapid for determination of Candesartan cilexetil from pure and its dosage forms. A simple reverse phase HPLC method was developed for the determination of Candesartan cilexetil (CDN) present in pharmaceutical dosage forms. An ODS C18 (250´4.6 mm, 5μ) column from Shimadzu in gradient mode, with mobile phase acetonitrile: KH2PO4 buffer [0.05M] (65:35) was used. The flow rate was 1.5 ml/ min and effluent was monitored at 256 nm. Bromhexine was used as the internal standard. The retention times were 3.0 min and 6.1 min for Candesartan cilexetil and Bromhexine respectively. The linearity range was found to be 0.5-400 mg/ml. The proposed method was also validated.

The proposed method can be used as alternative method to the reported one for the routine determination of selected drugs under the study in bulk and pharmaceutical dosage forms.