ABSTRACT: A new simple and rapid reverse-phase high-performance liquid chromatographic (RP-HPLC) method has been developed and validated for simultaneous estimation of cefpodoxime proxetil in bulk drugs and pharmaceutical dosage form. The separation was accomplished on a sunfire C-18 (250 × 4.6 mm, 5 μm) column with a mobile phase consisting of Methanol; Water (70:30 v/v) at a flow rate of 0.8 mL/min. The eluents were monitored at 236 nm by using PDA detector. The retention time for cefpodoxime proxetil was found to be 4.5 min, respectively. The cefpodoxime proxetil followed linearity in the concentration range of 5-30 μg/mL (r2 = 0.998). The amount of drug estimated by proposed method was found to be in good agreement with label claim. The developed method was validated for sensitivity, accuracy, precision. The LOD and LOQ values were found to be 0.0004 and 0.0012 μg respectively for cefpodoxime proxetil. The proposed method can be used for routine analysis of both these drugs simultaneously in their combined dosage form.

Literature survey also reveals RPHPLC 11-12 and spectrophotometric 13 methods for determination of CEFPO in combination with other drugs. No chromatographic method for estimation of Cefpodoxime proxetil in mobile phase (methanol: water at ratio (70:30) is reported. Hence an attempt has been made to develop a new RP-HPLC method using the following solvent at given mobile phase composition for simultaneous estimation in pharmaceutical dosage form. 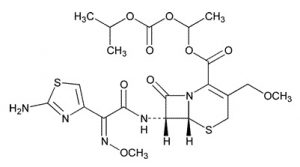 Selection of Linearity Range and Preparation of Calibration Curve Standard: The above standard stock solution (100 mg/mL) of cefpodoxime proxetil was diluted with mobile phase to yield six calibration curve (CC) standards with concentrations of 5, 10, 15, 20, 25 and 30 µg/ mL.15

Analysis of Marketed Tablet Formulation: To determine the content of Cefpodoxime proxetil in marketed tablets (label claim 200mg per tablet). 20 tablets were weighed, and average weight was calculated. Tablets were triturated and powder equivalent to average weight was weighed. The drug was extracted from the tablet powder with 100 mL methanol. To ensure complete extraction it was sonicated for 15 min. 0.1 mL of supernatant was then diluted up to 10 mL with the mobile phase. The resulting solution was injected in HPLC and drug peak area was noted. A regression equation was generated using peak areas of standard solutions. Using the regression equation and peak area of the sample the amount of Cefpodoxime proxetil in the sample was calculated 16.

System Suitability: The system suitability was assessed by six replicate injections of the CEF containing 10 μg/ml of the drug. The resolution, peak asymmetry and the number of theoretical plates were calculated the obtained values were demonstrated the suitability of the system for the analysis of these drugs in combination 17.

Method Validation: The method was validated for linearity, accuracy, intraday and interday precision, LOD, and LOQ, in accordance with ICH guideline 18.

Limit of Detection (LOD) and Limit of Quantification (LOQ): They were calculated as 3.3 σ/S and 10 σ/S respectively. Where σ is the standard deviation of the response (y-intercept) and S is the mean of the slope of calibration plot 18, 24.

Thus from the above, it has been observed that using a mobile phase of Methanol: Water (70:30 v/v) gave adequate retention at 4.533 min with good peak shape.

An RP-HPLC method was developed and validated for the determination of CEFO in tablet dosage forms on a column (Sunfire, c-18, 4.6 × 250mm, 5µm) with variable wavelength detection at 236 nm. The retention times of CEFO 4.53 min respectively. A linear correlation was obtained between area and concentrations of CEFO in the concentration ranges of 5-30 μg/ml. The low RSD values of CEFO for intraday (0.24-0.06 %) and interday (0.183-0.253%) at 236 nm. reveal that the proposed method is precise.

The limit of detection (LOD) and the limit of quantification (LOQ) for CEFO was found to be 0.00004 and 0.00012 μg/ml. These data show that the method is sensitive for the determination of Cefpodoxime proxetil. The recovery experiment was performed by the standard addition method. The mean recoveries were 98.4 ± 0.202 for CEFO. The results of recovery studies indicate that the proposed method is highly accurate. The proposed validated method was successfully applied to determine CEFO in tablet dosage form. No interference of the excipients with the absorbance of interest appeared; hence the proposed method is applicable for the routine simultaneous estimation of Cefpodoxime proxetil for pharmaceutical dosage forms. 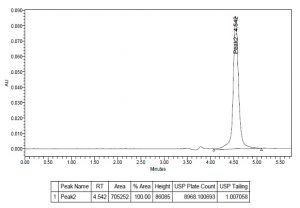 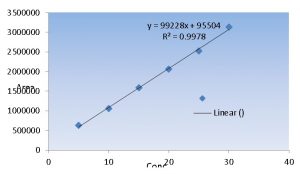 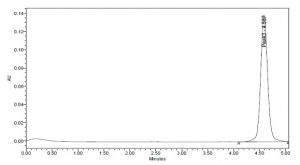 CONCLUSION: The proposed method is highly sensitive, reproducible, specific, and rapid. The method was completely validated showing satisfactory data for all the method validation parameters tested. The developed method was robust in the separation and quantification of Cefpodoxime proxetil.

ACKOWLEDGEMENT: We would like to thank MGV’s Pharmacy College, Nashik-03 (university of Pune) for providing all necessary facilities during this research work.