A simple, precise and stability-indicating HPLC method was developed and validated for the simultaneous determination of anti-hypertensive drugs Irbesartan, Losartan, diuretics Hydrochlorothiazide and Chlorthalidone. The separation was achieved on Hypersil BDS (Length 250 mm × Diameter 4.6 mm Particle size 5 μm) column with gradient flow. The mobile phase at a flow rate of 1.0 mL min−1 consisted of 0.05 M sodium dihydrogen phosphate buffer and acetonitrile (Gradient ratio). The UV detection was carried out at 220 nm. The method was successfully validated in accordance to ICH guidelines. Further, the validated method was applied for commercially available pharmaceutical dosage form.

INTRODUCTION: The parent guideline on drug stability testing Q1A (R2) issued by International Conference on Harmonization (ICH) stipulates stress studies to be carried out on a drug in order to establish the drug's inherent stability characteristics 1-2. Literature studies show various analytical methods reported for the estimation of individual, binary or tertiary combination of anti-hypertensive drugs or in combination with diuretics 3-12. Recently, HPLC method with fluorescence detection for simultaneous determination of chlorthalidone, valsartan and fluvastatin from human plasma has been reported 13.

The HPLC-MS/MS method for simultaneous estimation of atenolol, bisoprolol, hydrochlorothiazide, chlorthalidone, salicylic acid, enalapril and its active metabolite enalaprilat, valsartan and fluvastatin is also reported 14. However, so far, no method was reported for the simultaneous determination in combination for Irbesartan, Losartan, Hydrochlorothiazide, Chlor-thalidone and its application to pharmaceutical samples. An attempt was made in this study to develop a rapid, economical, precise and accurate stability-indicating assay method for simultaneous estimation of Irbesartan, Losartan, Hydrochlorothiazide and Chlorthalidone in tablet formulation.

The proposed method is rapid, simple, accurate, and reproducible, and can be successfully employed in the routine analysis of both these drugs simultaneously, in tablet dosage form.

Instruments: Integrated HPLC system, Ultimate 3000 manufactured by Dionex (Germany) was used for method development and method validation. This system comprised of a quaternary gradient pump, auto sampler, column oven and a photodiode array detector. PC installed Chromeleon software was used to record and integrates the chromatograms. The analysis was carried out at ambient temperature. Photostability studies were performed in a photostability chamber, from Thermolab (India).

Chromatographic Conditions: Hypersil BDS (Length 250 mm × Diameter 4.6 mm Particle size 5 μm) analytical column from Thermo Fischer Scientific Inc was used as a stationary phase. The flow rate was 1.0 mL min−1 and the detector was set at 220 nm. The volume of the sample solution injected was 10 μL. The gradient mobile phase consisted of 0.05 M sodium dihydrogen phosphate buffer and acetonitrile (Mobile Phase-B) with the gradient as mentioned in (Table 1). A membrane filter of 0.45 μm porosity was used to filter and degas the mobile phase.

Standard and Test solutions: Weighed accurately about 50 mg of each Irbesartan, Losartan, Hydrochlorothiazide and Chlorthalidone reference standard into 50 ml volumetric flask. Added to it 20.0 ml methanol and sonicated to dissolve. Diluted this solution up to volume with diluent (Buffer: Methanol 30:70 v/v). Pipette out 5.0 ml of this solution into 50 ml volumetric flask and diluted to volume with diluent. (100 μg mL−1 each of Irbesartan, Losartan, Hydrochlorothiazide and Chlorthalidone).Similarly, the test solutions were prepared at same concentration using same diluents. (100 μg mL−1 of each).

Method Development: A variety of mobile phases were investigated in the development of a stability-indicating LC method for the analysis of Irbesartan, Losartan, Hydrochlorothiazide and Chlorthalidone drug substances. The suitability of mobile phase was decided on the basis of selectivity and sensitivity of the assay, stability studies and separation among impurities formed during forced degradation studies.

The chromatograms were extracted for Peak purity and demonstrated as in (Fig. 2a, b, c, d, e, f, g and Table 3).

Linearity: Standard stock solution of the drug was diluted to prepare linearity standard solutions in the concentration range of 10 –150 μg mL−1 for all Hydrochlorothiazide, Chlorthalidone, Irbesartan and Losartan. Three sets of such solutions were prepared. Each set was analyzed to plot a calibration curve. Slope, intercept and coefficient of determination (r2) of the calibration curves were calculated to ascertain linearity of the method (Fig. 3 and Table 4). 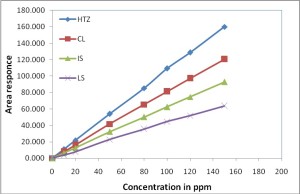 Recovery: Recovery of the method was determined by analyzed the drug products and synthetic mixture of drug products with 50%, 100% and 150% levels. These mixtures were analyzed by the proposed method. The experiment was performed in triplicate and recovery (%); RSD (%) were calculated (Table 5 and 6).

Precision: The precision of the proposed method was evaluated by carrying out six independent assays of test samples. RSD (%) of six assay values obtained was calculated. Intermediate precision was carried out by analyzing the samples by a different analyst on another instrument (Table 7).

TABLE 6: RECOVERY ON SYNTHETIC MIXTURE OF ALL FIVE DRUG SUBSTANCE

TABLE 10 - CHANGE IN PH OF BUFFER SOLUTION IN MOBILE PHASE

System Suitability: The system suitability parameters with respect to theoretical plates, tailing factor, repeatability and resolution between peaks of all drug substances were defined (Table No.12).

HPLC method development: The maximum absorption wavelength of the reference drug solution and of the forcefully degraded drug solution was found to be 220 nm. This was observed from the UV absorption spectra (Fig. 1) and was selected as detection wavelength for LC analysis. The main objective of this chromatographic method was separation of degraded impurities from all drugs. Forced degradation study revealed a critical separation of closely eluting impurity formed from the Hydrochlorothiazide, Chlorthalidone, Irbesartan and Losartan peaks. Hypersil BDS (Length 250 mm × Diameter 4.6 mm, Particle size 5 μm) helped in resolving all peaks as the column had carbon loading approx 11% against conventional ODS. This effect was observed by using the mobile phase 0.05 sodium hydrogen phosphates (pH 2.5) and acetonitrile in the gradient ratio.

Summary of Validation Parameters: The assay test method is validated for Specificity, Linearity, Precision, Accuracy (Recovery), Stability of Analytical Solution and Robustness and was found to be meeting the predetermined acceptance criteria.

CONCLUSION: The stability indicating RP-HPLC assay method was developed and validated for simultaneous determination of Irbesartan, Losartan, diuretics Hydrochlorothiazide and Chlorthalidone drug substances and drug products. The method was found to be simple, specific, Precise and Robust and can be applied for the routine and stability analysis for commercially available formulation.

ACKNOWLEDGEMENTS: The authors are thankful to entire team of JJT University and Mr. K Kaul, Mr. Lalit Mishra- Sharon Bio Medicine for their encouragement and support during the work.