A simple, rapid and accurate reverse phase high-performance liquid chromatographic method for the determination of 5-Flurouracil (5-FU) in pharmaceutical formulations and human plasma samples has been developed and validated. The assay of the drug was performed on a CLC C18 (5 μm, 25 cm 4.6 mm i.d.) with UV detection at 266 nm. The mobile phase consisted of methanol-water mixture in the ratio of 98:2, and a flow rate of 1 ml/min was maintained. The standard curve was linear over the range of 0.9-18.4 µg/ml (r2=0.9966). Analytic parameters have been evaluated. Within-day and between-day precision as expressed by relative standard deviation was found to be less than 2%. The method has been applied successfully for the determination of 5-FU in spiked human plasma samples and pharmaceutical formulations. The method will be useful for routine quality control analysis.

INTRODUCTION: A variety of uracil derivatives have been reported as anti tumor or antiviral agents or both. Among them, 5-Flurouracil (5-fluoro-1H-pyrimidine-2, 4-Dione) (5-FU) (structure 5-FU given below) is particularly important. As an antineoplastic agent, it has been used for the treatment of solid tumors of the breast and rectum 1. Many of these antineoplastic agents are potentially hazardous to the health of those healthcare workers involved in preparation and administration of these agents (e.g., oncology pharmacists and nurses) 2 as well as those involved in care of cancer patients (e.g., nurses, housekeepers, janitors, etc.). It is therefore important to have accurate methods for evaluation of the exposures received by these individuals from such agents. This requires an accurate and sensitive analytical method to detect concentrations of such agents at very low concentrations.

In the analytical methods the stability indicating methods have become an important aspect of any analytical method validation and a part of US FDA requirements 3. Currently, acceptable analytical methods do exist for several of these antineoplastics, and a few methods appeared in the literature, but usually only for an individual agent or for small groups of chemically similar agents 4-6 and development of an HPLC method for simultaneous analysis of five antineoplastic agents 7. However, the proposed   method was developed to provide analytical detection for a wider range, and with a single analysis. This method appears to be most feasible for attaining the maximum sensitivity (lower limit of detection) when used for detection of multiple antineoplastic in both air and surface samples. As a result of this information, RPHPLC was selected for the method to be developed. The RP-HPLC method for the determination of 5-Flurouracil in pharmaceutical formulations and spiked human plasma, was also undertaken in this study.

Instrumentation: All HPLC measurements were made on a Shimadzu Corporation system (Analytical Instruments division, Kyoto, Japan) consisting of a LC10AT solvent pump, SPD10AVP detector and a data station with win-chrome software version 3.1. The separation was performed on a CLC C18 column (5 µm, 25 cm x 4.6 mm i.d.). A CLC ODS (4 cm x 4.6 mm, i.d.) was used as a guard column to protect analytical column. A mixture of methanol and water [92:8, v/v] was used as a mobile phase at a flow rate of 1.0 ml/min. Hamilton 702 µLR injector with a 25 µL loop was used for the injection of the samples. Measuring at 266 nm effected quantification, and the chromatographic run time was 5 min. The mobile phase was filtered through 0.45 µ Millipore membrane filter and degassed. The separation was carried out at room temperature Equitron Fast Clean Ultrasonic cleaner were also used during the analysis. Analytically pure 5-flouracil has been purchased from (Sigma-Aldrich, India), tablets were purchased from the local market. All chemicals and reagents used were of AR/HPLC grade.

Standard Working Solutions: Working solutions of pure 5-FU and (0.63 mg ml-1) were prepared separately in the mobile phase.  Studies on the stability of analytes in working solution showed that there were no decomposition products in the chromatogram and also no difference in area-ratio during analytical procedure and even after storing for 2 days at 40C. 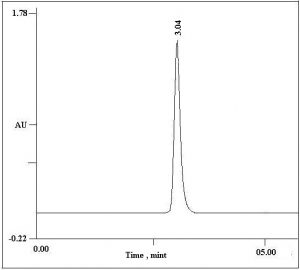 FIG. 1: A TYPICAL CHROMATOGRAM SHOWING THE SEPARATION OF 5-FLUROURACIL IN PURE FORM

Mobile Phase: For reverse phases, the retention of organic samples is always high with water as eluent.  Increasing the concentration of organic solvents in water can accelerate the elution of organic compounds.  The mobile phase was chosen after several trials with methanol, acetonitrile, isopropyl alcohol, triethylamine, water and various buffer solutions of different pH in various proportions.  Because of high transparency in UV region, methanol was selected with water as the mobile phase.  Moreover, better results were observed with methanol-water combination and hence, different ratios of methanol to water were tried to select the suitable ratio.  It was observed that at higher concentration of water in the mobile phase, the retention times of 5-FU was high and 5-FU was eluted poorly off the column.  The best separation of two compounds was achieved with methanol and water combination in the ratio of 92:8.

Flow Rate: Flow rate of the mobile phase plays a crucial role in chromatographic determination of pharmaceutical drugs.  The effect of flow rate was investigated by varying the flow rate of the mobile phase from 0.25 to 1.75 ml min-1.  Lower flow rates led to increase in resolution time and high flow rates led to considerable increase in pressure.  However, a flow rate of 1.0 ml min-1 gave an optimal signal to noise ratio with a reasonable separation time and hence permitted good analytical conditions.

Wavelength Selection: Effect of wavelength on the response factor and on the peak resolution was studied over the wavelength range of 200-300 nm.  Satisfactory chromatographic conditions were obtained at the wavelength of 266 nm.

Linearity of Detector Response: Linearity and range of the method were determined by analyzing different solutions containing 0.1-20.5 mg ml-1 of 5-FU under the chromatographic conditions mentioned above (n = 9).  Then 20 ml solution was injected into the column and chromatogram was noted.  The peak area ratio of 5-FU was plotted against the concentration of 5-FU to obtain the calibration graph (Fig. 2).  Table 1 gives the regression line, correlation coefficient, slope, intercept and % RSD.  Excellent linearity was noticed in the range of 0.9-18.4 mg ml-1 with r = 0.9985.

Limits of Detection and Quantification: Limit of detection (LOD) was established at a signal-to-noise ratio (S/N) of 3 while limit of quantification (LOQ) was calculated at S/N value of 9.  The LOD and LOQ 8 values were found to be 0.25 mg ml-1 and 0.85 mg ml-1, respectively (Table 1).

TABLE 1:  LINEARITY RESULTS, LIMIT OF DETECTION AND LIMIT OF QUANTIFICATION

Suitability of the method: The suitability of the method was checked by determining the chromatographic parameters viz., resolution, selectivity and peak asymmetry and the results are shown in Table 2. The observed values of resolution (more than 1.5), selectivity (more than 1) and peak asymmetry (less than 2) revealed ideal chromatographic conditions for the quantification of 5-FU .

Precision: The precision of the method (Intra- and inter-day variations of replicate determinations) was checked by injecting 5-FU (n = 9) at the LOQ level.  The results obtained are recorded in Table 3.

Accuracy: A standard working solution containing 15 and 8 mg ml-1 of 5-FU, respectively, was prepared and the mixture was injected (n = 9) and chromatogram was recorded.  From the respective area counts, the concentrations of the 5-FU were determined using the calibration graph.  The accuracy, defined in terms of % deviation of the obtained concentration from the actual concentration is listed in Table 3.

TABLE 3:  INTRA-DAY (1 REPRESENTATIVE DAY) AND INTER-DAY PRECISION AND ACCURACY FOR THE DETERMINATION OF 5-FU

Ruggedness: The ruggedness of the proposed method was evaluated by carrying out the analysis of the working solution using the same chromatographic system and the same column on different days 9.  Small differences in area-ratios and good constancy in retention times were observed after 48 h time period.  The RSD values of less than 1.5% for both areas and retention times were obtained (Table 4).  The comparable detector responses obtained on different days indicated that the method is capable of producing results with high precision on different days.

TABLE 4:  DAY TO DAY VARIABILITY ACCORDING TO AREA AND RETENTION TIME

The ruggedness of the method was examined by injecting the standard working solution into a different HPLC unit.  The high degree of reproducibility of the detector response and retention times indicates that the method is fairly rugged.

Specificity of the method: The specificity of the proposed method was confirmed by the fact that the drugs viz., nimesulide, amoxicillin, cloxacillin, cefadroxil, methdilazine hydrochloride, diclofenac sodium, and ciprofloxacin did not interfere in the determination, as evident from their retention times which are different from that of 5-FU.

Analysis of Plasma Samples: The proposed method was applied to the determination of 5-FU in spiked plasma samples.  The results obtained for precision and accuracy at the three different concentrations in plasma are recorded in Table 5.  Low values of relative standard deviation indicate high precision of the proposed method.  The proposed method is found to be accurate as evident from low % Bias values.

TABLE 5: PRECISION AND ACCURACY DATA FOR THE DETERMINATION OF 5-FU IN HUMAN PLASMA SAMPLES

*a Average of five determinations

Analysis of Pharmaceutical Preparation: The proposed method was successfully applied to the analysis of 5-FU in injections and the results are shown in Table 6.  The low values of relative standard deviation indicate high precision of the method.

Recovery studies: To study the accuracy and reproducibility of the proposed method, recovery experiments were carried out.  The recovery of the added standard was studied at five different levels.  Each level was repeated five times.  To aliquots of the previously analyzed preparations, a known concentration of standard solution of 5-FU was added.  The content of 5-FU was once again determined by the proposed method.  From the amount of drug present, percentage recovery was calculated using the following formula:

CONCLUSION: The proposed RP-HPLC method showed acceptable linearity, precision and accuracy over the concentration range mentioned.  The method described is rapid, since preparation of plasma samples prior to chromatography is relatively simple and the total chromatographic run time is about 5 min.  The chromatographic method could be used to analyze a large number of plasma samples each day in clinical laboratories and pharmaceutical formulations in quality control laboratories.  Hence, the proposed method could be adopted for the assay of 5-FU in plasma samples and pharmaceutical preparations.