INTRODUCTION:Benign prostatic hyperplasia is commonly occurring condition in elderly men and this is often associated with lower urinary tract symptoms.

Clinical trial study shows that Tamsulosin, Solifenacin are safe and effectively responsible for cure diseases Tamsulosin selectively act on a A1 receptor on prostate where Solifenacin is a urinary antispasmodic i.e., Antimuscarinic agent

Several analytical method UV, HPLC were developed for individual drug[1-10] but there is no simultaneous  estimation  and  stability  indicating  assay  method  available  for  Tamsulosin  and Solifenacin.

(a)   Tamsulosin: Tamsulosin is a selective antagonist at alpha-1A and alpha-1B-adrenoceptors in the prostate, prostatic capsule, prostatic urethra, and bladder neck.

At least three discrete alpha1-adrenoceptor subtypes have been identified: alpha-1A, alpha-1B and alpha-1D; their distribution differs between human organs and tissue.

Solubility: Sparingly soluble in water and Methanol, slightly soluble in glacial acetic acid and Ethanol, and practically insoluble in ether.

Mechanism of Action: Tamsulosin is a selective antagonist at alpha-1A and alpha-1B-adrenoceptors in the prostate, prostatic capsule, prostatic urethra, and bladder neck. At least three discrete alpha1-adrenoceptor subtypes have been identified: alpha-1A, alpha-1B and alpha-1D; their distribution differs between human organs and tissue. Approximately 70% of the alpha1-receptors in human prostate are of the alpha-1A subtype. Blockage of these receptors causes relaxation of smooth muscles in the bladder neck and prostate, and thus decreases urinary outflow resistance in men.

(b)   Solifenacin: Solifenacin (rINN), marketed as Solifenacin succinate under the trade name Vesicare, is a urinary antispasmodic of the anticholinergic class. It is used in the treatment of overactive bladder with urge incontinence. 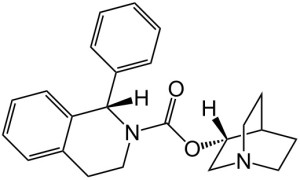 Mechanism of Action: Solifenacin is a competitive muscarinic acetylcholine receptor antagonist. The binding of acetylcholine to these receptors, particularly the M3 receptor subtype, plays a critical role in the contraction of smooth muscle. By preventing the binding of acetylcholine to these receptors, Solifenacin reduces smooth muscle tone in the bladder, allowing the bladder to retain larger volumes of urine and reducing the number of incontinence episodes.

Reagents & Chemicals: The Active pharmaceutical ingredient of Solifenacin succinate and Tamsulosin were obtained as gift sample from Hetero Drugs and Ogene system (I) Pvt Ltd. All solvent and reagent used were of HPLC and spectroscopic grade. HPLC grade, Acetonitrile, Orthophosphoric acid, Triethylamine was obtained from Merck Pvt.ltd.  The synthetic mixture was prepared by using marketed formulation containing tablet of Tamsulosin; brand name Urimax; B -No 9865742; mfg by Cipla; mfg date AUG 2010; Exp JUL 2012, and API of Solifenacin. This was simulating dosage form. Millipore water obtained from (Milli Q) was used in all experiments.

Pipette out 1 mL above solution into 10 ml volumetric flask diluted with mobile phase up to the mark.

Preparation of Pharmaceutical Dosage Form Solutions: Sample concentration was prepared as per new formulation vesomni. Weigh synthetic mixture equivalent  to 4 mg Tamsulosin and 60 mg of Solifenacin were transfer into 100 mL volumetric flask to this add 25 mL of methanol mixed well to dissolve and make up the volume with methanol and sonicate for 15 min.  Solution was centrifuge for 15 min at 5000 rpm;  supernatant  was  collected  and  filtered  through  a  0.22µm  membrane  filter. Pipette out 1 mL above solution into 10 ml volumetric flask diluted with mobile phase up to the mark and injected in to HPLC system for analysis.

Optimization of the chromatographic conditions: The  initial  literature  search  indicated  that  many  HPLC  methods  are  available  for individual drugs. Based  on literature search,  attempts  were  made to develop  a  simple  method which  has  less  retention  time  and  higher  selectivity,  top  priority  was  given  for  complete separation of Solifenacin and Tamsulosin. Solifenacin and  Tamsulosin are  hydrophilic  almost  soluble  in  aqueous  solution  and  freely  soluble  in  methanol.  Several mobile  phases  were  tested  until  good resolution obtained between  two  drugs in  preliminary experiments, both  drugs Solifenacin and Tamsulosin were subjected  to  separation  by  reverse phase  HPLC  using sodium phosphate 20mM buffer and methanol as organic  modifiers. These drugs  were  able  to  be  separated  on  the  chromatogram  but  peak  shape  was  not  good  for Solifenacin and tailing was seen more than 1.5.

The effect of pH (6.5, 4.5 3.5 and 30) and mobile phase composition was also checked.  It  improved  peak  shape  at  pH  3.0  slight  extent  but  the number of theoretical plates  is very  less. Acetonitrile was found to be better than methanol in terms of resolution and peak shapes.  Initially try with mixture of methanol Acetonitrile it shows good peak shape with theoretical plate but Tamsulosin get merge with solvent peak. Resolution was also not good. Then only acetonitrile was used.

The chromatogram obtained was improved. For  reducing  tailing  Triethylamine  was  used  at  the  conc.0.1%  but  no  improvement  in  tailing factor then 0.2% was used. Finally methods was developed with 30:70 (ACN: sodium phosphate buffer 20mM (0.2% TEA)) pH 3, the chromatogram obtained was better than the previous one in all  aspects  with  good  peak  shape,  tailing  factor,  resolution  and  theoretical  plate  as  per  USP requirement. 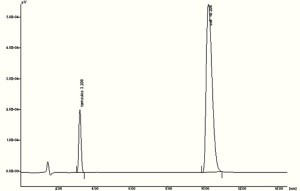 FIGURE: 3 CHROMATOGRAPHIC SEPARATION OF SOLIFENACIN AND TAMSULOSIN IN BULK 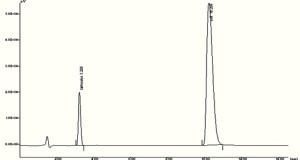 FIGURE: 4 CHROMATOGRAPHIC SEPARATION OF SOLIFENACIN AND TAMSULOSIN IN SYNTHETIC MIXTURE.

Linearity and range: The Linearity of detector response to different concentration of all the three drugs was studied with a series of working standard solutions prepared by diluting the stock solution with mobile phase. The Standard plots were constructed between concentration vs. peak area a linear response of peak area was observed over the concentration range of 15-90 µg/mL for Solifenacin and 1-6µg/mL for Tamsulosin. Ten microlitre of each sample was injected under above chromatographic conditions and peak area was measured. Keeping the values to the straight line equation of calibration curve, quantification was carried, the data of linearity curve was summarized in the table 2 and 3 for Solifenacin and Tamsulosin respectively, figure 5 & 6 for Solifenacin and Tamsulosin respectively. It was found that correlation coefficient (R2) and regression analysis were within the limit which is summarized in the table 1. 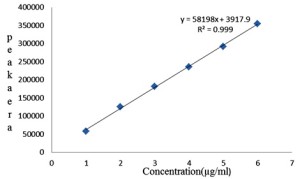 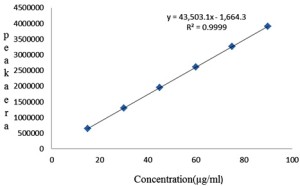 Limit of quantitation was established by identifying the concentration which gives signal to noise ratio about 10. The LOD and LOQ were estimated in table 4.

Precision: According to ICH guidelines repeatability should be assessed by using a minimum of nine determinations covering the specified range for the procedures (i.e., three concentrations and three replicates of each concentration) precision was studied to find out intra and inter day variations of the proposed method at three different levels (50, 100 and 150% or 80, 100, 120%) 30, 60 & 90 µg/mL for Solifenacin and 1, 4 & 6µg/mL for Tamsulosin on the same and on three different days respectively. The results were interpreted by statistical analysis by calculating % RSD values and all the results were within the acceptance criteria of not more than 2 % and the results are tabulated in the table: 5, 6 for Solifenacin and 7, 8 for Tamsulosin. The  %  RSD  values  for  intraday  and  inter day  were  <2%,  indicating  that  the method was sufficiently precise.

Accuracy: The accuracy of the HPLC method was confirmed by recovery studies by spiking 50,100 & 150% of pure drugs to the pre analyzed samples and the samples after dilution injected into the system (n=3). The peak area of each drug was measured and the recovery values for paracetamol, Phenylephrine and caffeine were determined by using the formula. The statistical data was presented in the table 9 amd 10 for solifenacin and Tamsulosin respectively;

10µL of solution was injected into the optimized chromatographic system. For system suitability 6 replicates of working standard samples were injected and the parameters like Retention time (RT), Plate number(N), Peak area and peak asymmetry of sample were calculated these results are presented in table 11.

Assay of synthetic mixture: The validated method was applied to determination of Solifenacin and Tamsulosin in commercial tablet. Weight and transfer 4 mg Tamsulosin and 60 mg of Solifenacin synthetic mixture were transfer into 100 mL volumetric flask to this add 25 mL of methanol mixed well to dissolve and make up the volume with methanol and sonicate for 15 min. Solution was centrifuge for 15 min at 5000 rpm;  supernatant  was  collected  and  filtered  through  a  0.22µm  membrane  filter.Pipette out 1 mL above solution into 10 ml volumetric flask diluted with mobile phase.  The  result  assay  indicates  that  the  method  is  selective  for  routine  analysis. Result mention in table 12.

TABLE 12: ASSAY OF SOLIFENACIN AND TAMSULOSIN IN SYNTHETIC MIXTURE

CONCLUSION: A simple, specific, accurate, precise, stability indicating reverse phase high performance liquid  chromatography  (RP-HPLC)  method  has been  developed  which  can  be  used  accurately quantitative  estimation  of  Solifenacin  and  Tamsulosin  for  routine  analysis  of  individual  and combination  of  drugs. Method was validated as per ICH Q2 (R2) so it can be used by QC department.

ACKNOWLEDGMENTS: I thank God for letting me complete my work successfully and I take privilege to sincerely thank my professor for his extreme support and guidance all throughout my work. I thank chaitanya and all my co-research scholars for their support and cooperation. I thank my UGC (MANF) funding authorities for their indebt support, without which the work cannot be accomplished.