ABSTRACTA simple, precise and stability-indicating ultra-performance liquid chromatography (UPLC) method for simultaneous determination of Paracetamol (PCM) and Lornoxicam (LOR) in tablet formulations has been developed and validated. The UPLC separation was achieved on a Waters Acquity UPLC BEH shield RPC18 (2.1x50mm, 1.7µm) column using acetonitrile:30mM Ammonium acetate (40:50, v/v) as mobile phase at a flow rate of 0.5mL/min. The eluted compounds were monitored at 260nm, the run time was within 5.0min, which PCM and LOR and its impurities were well separated. Quantitation was achieved over the wide concentration range 0.5-150μg/mL and 10-48μg/mL with mean recovery of 100.97 ± 0.31% and 99.73 ± 0.71% for PCM and LOR, respectively. Linear regression analysis revealed linearity in the range of 0.5-150µg/band and 10-48µg/band for PCM and LOR respectively. Drugs were subjected to the stress conditions of acid, alkali hydrolysis, oxidation for degradation. PCM was found to stable in base, acid, alkali, oxidative stress conditions and LOR was found to degraded significantly in base, and stable in acid/alkali, oxidative degradation conditions. The degradation products were well resolved from main peaks and its impurities, proving the stability indicating power of the method. The developed method was validated as per international conference on harmonization (ICH) guidelines with respect to specificity, linearity, limit of detection, limit of quantification, accuracy, precision and robustness

INTRODUCTION: Paracetamol (PCM) is chemically known as N-(4- hydroxyphenyl) acetamide. PCM inhibits prostaglandin biosynthesis by blocking the enzyme cyclooxygenase 2-5. Paracetamol (Fig. 1) is an analgesic-antipyretic agent. It is effective in treating mild-to-moderate pain such as headache, neuralgia, and pain of neuro-muscular origin 6. Owing to widespread use of PCM in different kinds of pharmaceutical preperations, rapid and sensitive methods for the determination of PCM and in combination are being investigated. The most recent methods for the determination of PCM include chromatographic 7-10,electrochemical 11-14, spectro-photometric 15-18 and fluorescence spectroscopic techniques 19. Lornoxicam (LOR) is chemically known as 6-chloro-3-(hydroxyl (pyridin-2-ylamino) methylene)-2-methyl-2, 3-dihydro-4 H-thieno (2, 3) (1, 2) thiazin-4-one1, 1-dioxide belongs to the class of cyclooxygenase inhibitor of non-steroidal anti-inflammatory drug (NSAID) of the oxicam class with analgesic, antipyretic properties. It has been found to be effective in inflammatory diseases of the joints, osteoarthritis, pain following surgery, and acute lumbar sciatica conditions, and for postoperative pain management 20. In the literatures, a voltammetric 21, polarograhic 22, UV spectrophotmetric 23, LC/MS/MS 24, 25, TLC-densitometry 26 and high performance liquid chromatographic 27-31 methods were reported for the analysis of Lornoxicam.

Analytical techniques such as HPLC, spectrophotometry 32, 33, high-performance thin layer chromatography (HPTLC) 34, LC/MS/MS methods have been developed for quantitative determination of Paracetamol and Lornoxicam in various pharmaceutical dosage forms. Analysis of this mixture is challenging because of huge difference in the concentration, i.e., Lornoxicam is the minor component 8mg/tablet whereas, Paracetamol is major component 500mg/tablet.

Generally in the simultaneous estimation, isosbestic point of UV scan is selected. But, in this combined formulation the concentration of both the components did not give easy selection of this point and required high resolution chromatography. Literature reveals, RP-UPLC methods has not been reported for the simultaneous estimation of Paracetamol and Lornoxicam in combination formulation.

Therefore, attempt has been taken to develop and validate a simple, rapid, accurate, sensitive and precise RP-UPLC method for the simultaneous estimation of Paracetamol and Lornoxicam in marketed pharmaceutical dosage form.

Chromatographic conditions and Instrumentation: Analytical conditions were standardized through the LC system using Waters Acquity UPLC with photodiode array detector. The output signal was monitored and processed using Empowers software. The chromatographic column used was Acquity UPLC BEH shield RP-18, 2.1 mm x 50 cm and 1.7µm particle size. The separation was achieved on an isocratic method with a mobile phase, 30nm ammonium acetate: acetonitrile (60:40) respectively. The flow rate of mobile phase was 0.5 ml/min with injection volume 10µL. The column temperature was maintained at 27°C and the detection was monitored at a wavelength 260 nm.

Preparation of Stock Solutions: Standard stock solutions of both drugs were prepared by dissolving 1250mg of PCM and 18mg of LOR in acetonitrile to obtain 100ml stock solution (12500:180µg/ml) and further diluted to get final linear concentrations.

Validation of the Method: The method was validated in terms of accuracy, specificity, linearity, precision, limit of detection (LOD), limit of quantification (LOQ) and system suitability. The accuracy was carried out in triplicates and expressed in terms of percent recovery of the known amount of PCM (125µg mL-1) and LOR (40µg mL-1) were added to a pre qualified sample solutions and the amount of the active pharmaceutical ingredients were estimated against straight-line equation of calibration curve in presence of excipents. The precision (% relative standard deviation, % RSD) was expressed with expected drug concentrations.

Linearity: Different concentrations of PCM and LOR were prepared from stock solution at 11 concentration levels from 0.5 to 150µg mL-1 for PCM and form 10 to 48µg mL-1 for LOR. The slope, Y-intercept and correlation coefficient were calculated.

Precision: The precision of the proposed analytical method was assessed as repeatability (intra-day) and intermediate precision (inter-day) by carrying out six independent assays of PCM and LOR test samples against qualified reference standard. The percentage RSD of six assay values was calculated. Intermediate precision was performed with two different analyst using different instruments on different days.

Accuracy: To check the accuracy of the developed method was carried out by standard addition of each drug corresponding to the concentrations at 80%, 100% and 120 % of the label claim along with excipents in triplicate. The basic concentration levels of the sample solution selected for spiking of the standard drugs solution were 1250.0µg mL-1 of PCM and 20.0µg mL-1 of LOR. Percentage recovery and relative standard deviation were then calculated.

Optimization of the Chromatographic Conditions: Different mobile phases were tried to resolve PCM and LOR. The optimum results were obtained with mobile phase consisting 30mM ammonium acetate: acetonitrile (60:40 % V/V). The average retention times for Paracetamol and Lornoxicam was found to be 1.73±0.002 and 2.59 ±0.004 min, respectively (Fig. 2).

Assay procedure for Dosage Forms: To determine the amount of PCM and LOR in the tablet (label claim PCM 500mg and LOR 8mg), twenty tablets were weighed; average weight was determined and powdered. An amount of powder equivalent to 1250mg of PCM and 20mg of LOR was weighed and dissolved in 40ml of acetonitrile and sonicated for 30min to ensure the complete dissolution of both the drug. After filtration the volume was made up to 50ml with acetonitrile. Further diluted with acetonitrile to get 125.5µg mL-1 of PCM and 2µg mL-1 of LOR, which was subjected to the above method and amount of PCM and LOR were determined.

Forced Degradation Studies: Forced degradation studies were conducted on samples containing individual drugs of PCM and LOR, their combination in equal volumes. Intentional degradation was carried out by exposing 10mL of reference/test stock solution to 5mL of 1.0N hydrochloric acid/sodium hydroxide for 60 min at 100°C using a water bath. The solutions were withdrawn, allowed to attain room temperature. Oxidative degradation of sample solution was conducted on a water bath maintained at 100°C for 1.0 h, by exposing equal volumes of standard/test stock solution with 3% hydrogen peroxide solution.

RESULTS AND DISCUSSIONS: With objective of reducing analysis time and maintaining good efficiency, there has been substantial focus on high-speed chromatographic separations. The developed method was found to be simple, accurate and compatible with LC-MS/MS studies.

Linearity: Linearity solutions were carried out at 11 concentrations levels from 0.5 to 150µg mL-1 for PCM and form 10 to 48µg mL-1 for LOR with correlation coefficient of 0.9998 and 0.9991, respectively (Fig. 3). The result show that an excellent correlation existed between the peak area and concentration of the analyte. 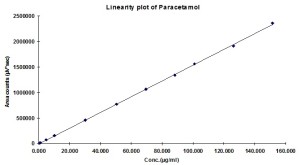 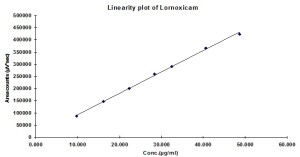 Precision: Method precision measures the closeness of analytical results when six separately prepared standards are injected. It expresses the agreement between a series of measurements obtained from multiple sampling of the same homogeneous sample under prescribed conditions. The percentage RSD values for the precision study was 0.32, 0.34 % (inter day precision) and 0.09, 0.31% (intra-day precision) for PCM and LOR, respectively. This is confirming good precision of the method.

Accuracy: The accuracy was assessed form three different added standard solutions containing 1250 µg mL-1 of PCM and 20µg mL-1 for LOR. The highest %RSD was found to be 0.28 and 0.75 in UPLC method for PAC and LOR, demonstrated that the method was accurate within the desired range (Table 2).

TABLE 2: ACCURACY OF THE METHOD

Formulation Analysis: The percentage assay of PCM and LOR was performed for commercially available innovator LORSAID tablets. The mean assay (n=6) were 99.39 and 98.89 respectively. The percentage RSD value for the six assay values was 0.30 for PCM and 0.33 for LOR.

CONCLUSIONS: The proposed method is accurate, simple, economical, rapid and selective for the simultaneous estimation of Paracetamol and Lornoxicam in tablet dosage form without prior separation. The excipents of the commercial sample analyzed did not interfere in the analysis, which proved the specificity of the method for these drugs. The proposed method involves direct quantification of both the components. By UPLC method analysis can be done with in 5 min with the use of simple solvents which are compatible for LC-MS/MS studies. Hence, the developed UPLC method can be conveniently adopted for the routine quality control analysis in the combination formulation.