ABSTRACT: Quantitative and qualitative improvement of rare and valuable bioactive plant products is promisingly possible using In-vitro cell culture techniques. The present investigation was conducted with the aim to elicit the synthesis ofandrographolide by subjecting cultured cells of Andrographis paniculata to Salicylic acid (SA) and Chitosan mediated abiotic stressCell suspension culture of Andrographis paniculata (Burm. f.) Nees. was treated with salicylic acid and chitosan at late exponential phase. The results were analyzed using High Performance Liquid Chromatography technique. The suspension culture was treated with 0.05mM, 0.5mM and 1.5mM concentrations of salicylic acid for 24, 48 and 72 hrs of treatment duration. The treatment of chitosan was administered to the cell suspension of Andrographis paniculata with the concentrations of 5 mg, 10 mg and 20 mg per 50 ml of suspension culture and each concentration was studied for 24, 48 and 96 hrs of treatment duration. The results revealed that salicylic acid (0.05 mM) for 24 hrs of treatment duration showed as maximum as 18.5 fold increment in andrographolide content (37.0 μg/g).. The chitosan treatment with 20 mg for 48 hrs duration explored highest elicitation of andrographolide (119.0 μg/g, 59.5 fold) compared to the respective control and rest of the treatments. Chitosan mediated elicitation treatment was superior over the treatments of salicylic acid.

INTRODUCTION:Andrographis paniculata (Burm.f.) Nees. is a well-known ancient medicinal herb with an extensive ethnobotanical history in Asia. It is commonly known as ‘Kalmegh or King of Bitters’ in India and Nepal. It belongs to the family Acanthaceae. The plant A. paniculata is used prominently in about 26 Ayurvedic formulations 1. It has been used traditionally as antidote in case of colic dysentry and dyspepsia 2.

In Ayurveda, the drug has been described as antipyretic and hepatoprotective. The plant is cultivated in medicinal nurseries due to its increasing demand.

The minor constituents include andrograpanin, deoxyoxoandro-grapholide 21, 22, 23, 24, 25; glycosides viz., neoandrographolide and andrographoside 26 and flavonols which include Oroxylin, wogonin, andrographidine A, B, C, D, E and F 27, 28. The chemical synthesis of plant metabolites is difficult due to their structural complexity. However, it is conveniently possible by plant tissue culture technique where the basic nature of the bioactive compound is retained. An extensive research has been done on plant cell culture for producing secondary metabolites but this technology is still facing limitations.

The elicitors trigger the formation of secondary metabolites in the plant system 29, 30. Various biotic and abiotic elicitors have been reported for enhanced production of secondary metabolites. The homogenate of Botrytis mycelium has been reported to enhance the accumulation of sanguinarine up to 3% of the cell dry weight in cultured cells of P. somniferum 31. Agaropectins has been reported to restore the synthesis of shikonin in cell suspension of Lithospermum erythrorhizon 32. Adventitious root culture mediated enhancement in andrographolide content in A. paniculata 33. Considering the medicinal importance of this unique bioactive metabolite, an in vitro experiment on the elicitation of andrographolide was attempted in the cell culture of A. paniculata using two chemical elicitors,salicylic acid and chitosan.

Salicylic acid is acolorless crystalline organic acid. Its molecular structure is C6H4 (OH) COOH, where the OH group is ortho to the carboxyl group. It is also known as 2-hydroxybenzenecarboxcylic acid. It has important role to play in growth and development, photosynthesis, transpiration, ion uptake and solute transport.SA has been reported to induce gene regulation related to biosynthesis of secondary metabolites in plants 34. Chitosan is a acetylated β-1, 4- linked D-glucosamine polymer, which acts as a structural component of the cell wall of several plant fungal pathogens. The effect of chitosan on secondary metabolite production has been investigated in plant systems like Nicotiana tabacum and Eschscholzia californica 35.

MATERIALS AND METHODS: The present work was done in Plant Tissue Culture Laboratory, Department of Botany, The Institute of Science, Mumbai.

Cell suspension culture: MS media supplemented with 2, 4-D: BAP (1.0:0.5) was used to grow the profuse callus from the leaf explants of Andrographis paniculata (Fig. 1). The callus was then transferred into liquid MS media supplemented with same hormonal combination and concentration except agar. The cell suspension culture was grown in dark condition for 30 days with 110 rpm at 25+1oC in gyratory shaker. The cell growth phase was determined using colorimetric method.

Preparation of Chitosan elicitor: The treatment doses for chitosan were prepared in aqueous medium 38 and the treatment was administered to the cell suspension of Andrographis paniculata with the concentrations of 5 mg, 10 mg and 20 mg per 50 ml of suspension culture. The treatment was given at late exponential phase on 25 days and these cultures were incubated at 25 + 2oC in gyratory shaker (110 rpm) under dark condition. Each concentration was studied to 24, 48 and 96 hrs of treatment duration. All the experiments were done in triplicate.

Analytical methods: After each experiment, cell suspensions were filtered and washed several times with distilled water and filtered cells were dried in oven at 50oC to a constant weight. Completely oven dried samples of all treatments were powdered using mortar and pestle.

150 mg of each powdered sample was sonicated using 2 mm probe for 10 min with pulse rate operating at 10 sec. on and 2 sec. off, amplitude 20% in 1.5 ml of methanol using Sonics Vibra Cell VCX- 130 instrument. After sonication the extract was centrifuged at 5000 rpm for 5 min. the supernatant was transferred into 2 ml eppendorf tubes and the final volume was adjusted to 2 ml with HPLC grade methanol. This extract was used for HPLC analysis. For HPLC analysis, 2 ml of methanol extract was filtered with 0.45 mm nylon syringe filter (Tarsons). The filtered extracts were stored in clean HPLC vials before injection into HPLC system.

Andrographolide content in the samples was detected and quantified by HPLC system, supplied by Agilent Technologies comprising 1100/1200 Column Thermostat, 1200 Variable Wavelength Detector, 1100/1200 Quaternary Pump and 100/1200 Thermostatted Autosampler. ZORBAX 300SB-C18 column, dimensions 4.6 x 150 mm (Agilent Technologies, USA) with particle size of 5μm was used. The column was operated in the reverse phase mode. The standard compound, andrographolide was obtained from Sigma-Aldrich. Andrographolide compound in the samples was detected at 223 nm wavelength. All the solvents used were of HPLC grade (Fisher Scientific, India and Sigma - Aldrich).

The purified RO water (Analytica, India) was used for preparing mobile phase. All the samples were filtered through 0.45 mm membrane filter. The mobile phase with a mixed solution of Acetonitrile: 0.1% (v/v) phosphoric acid in water (40: 60, v/v) was used under isocratic conditions for the analysis of andrographolide. 20 μl of each sample was used for injection and the flow rate was maintained 1.0 ml/min. The run was continued for 8 minutes for column 4.6 x 150 for chitosan treated samples and for 20 minutes for the column length of 4.6 x 250 mm for the treatment of salicylic acid to achieve complete resolution and detection of andrographolide. The 20 ppm standard andro-grapholide solution wasprepared in HPLC grade methanol and 20 μl from 20 ppm solution was used for injection. Injection volume of 20μl was kept constant during the experimentation. Identification of andrographolide in cell samples was confirmed by retention time with the standard and peak purity by wavelength. 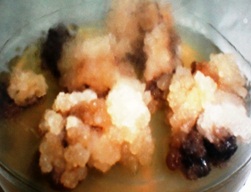 HPLC results: The average retention time with ± standard deviation was found to be 4.44±0.03 min and 2.31±0.02 min for andrographolide in the suspension culture samples treated with SA and chitosanelicitor respectively (Fig. 2).

FIG. 2: HPLC CHROMATOGRAMS SHOWING CHROMATOGRAPHIC SEPARATION OF ANDROGRAPHOLIDE FROM OTHER COMPOUNDS IN CELL SUSPENSION CULTURES EXTRACT OF A. PANICULATA. a. Salicylic acid treatment and b. Chitosan treatment.

Effect of salicylic acid on Andrographolide production: The results obtained in Salicylic acid (SA) treated samples with respect to andrographolide production are presented in Table-1. SA treatment was administered with varying concentrations of 0.05 mM, 0.5 mM and 1.5 mM per 50 ml cell suspension culture of A. paniculata. Each concentration was subjected for 24 hrs, 48 hrs and 72 hrs of treatment duration.

In 24 hrs of treatment duration, the maximum andrographolide production was noticed in 0.05 mM SA treated samples which was 18.5 fold (37.0 μg/g) higher as compared to control (2.0 μg/g, Fig. 3). In 48 hrs treatment, 0.5 mM SA was found to be most effective with respect to andrographolide production and yielded 7.66 fold enhancement (69.0 μg/g) over control (9.0 μg/g). Whereas in 72 hrs treatment period, 0.05 mM SA was observed to be optimal concentration indicating slight increase in andrographolide content (15.0 μg/g). It was not much higher than the control (5.0 μg/g).

Effect of Chitosan on Andrographolide production: Chitosan was used in 5 mg, 10 mg and 20 mg concentration per 50 ml of cell suspension culture of A. paniculata. Each concentration was subjected for 24 hrs, 48 hrs and 96 hrs of treatment duration (Table 1). The 24 hrs treatment indicated proportionally good enhancement in the quantity of andrographolide over control samples except for 20 mg concentration (Fig. 4). The samples treated with 5 mg and 10mg chitosan for 24 hrs yielded 1.76 fold (46.0 μg/g) and 1.69 fold (44.0 μg/g) enhancements in the quantity of andrographolide. However, higher dose i.e. 20 mg indicated reduction in andrographolide content. It was 15.0 μg/g compared to control (26.0 μg/g).

The results obtained in 48 hrs treatment are surprisingly varying in the context that the lower and moderate concentrations of chitosan turns most unfavorable but the higher concentration i.e. 20 mg chitosan was more responsive unlike 24 hrs treatment.

Chitosan treatment with conc. of 20 mg responded positively for the enhancement of andrographolide content up to 119.0 μg/g in 48 hrs duration. It was 59.5 fold higher than the control estimate). Similar results were obtained in callus culture of Taxus x media 39.

The longer treatment period of 96 hrs did not revealed exciting results for andrographolide production. The quantity of andrographolide estimated for 5 mg and 20 mg chitosan was too less to control samples. It was 11.0 μg/g and 57.0 μg/g respectively against the control estimate of 65.0 μg/g. However, a slight enhancement was observed in 10 mg chitosan which yielded 81.0 μg/g against 65.0 μg/g in respective control indicating 1.24 fold increase (Fig. 5). 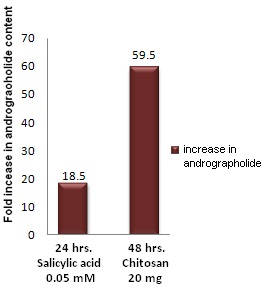 SA accumulates at the site of pathogenic attack and plant hypersensitive reaction from where it spreads to different parts of the plant to induce a wide range of defense response. SA induces gene expression related to biosynthesis of secondary metabolites in plants 34. Acetyl salicylic acid, an analogue of SA is reported to induce indole alkaloid in C. roseus cell culture 42, pilocarpine in jaborandi leaves 43, alkaloids in hairy root cultures of Brugmansis candida 44.

SA has been reported to stimulate biosynthetic gene expression in Scopolia parviflora 45. The results obtained suggest that elicitor concentrations and treatment duration are very crucial factors for the enhancement in product synthesis. It has been reported that prolonged elicitor treatment and high concentration of chitosan ceases growth by 53% in Morinda elliptica cell culture after 3 days of incubation period whereas highest concentration of chitosan release good amount of anthraquinone in the media 46.

Although extensive efforts have been made in order to understand the mechanism of elicitation, the exact mechanism is still under investigation. The results unearth that the cultured cells of Andrographis panniculata responds most favorably with the chitosan treatment over salicylic acid under studied concentrations for the elicitation of andrographolide compound.

ACKNOWLEDGMENTS: The authors are thankful to the Director, The Institute of Science, Mumbai for providing the analytical facilities.