ABSTRACT: Oceans and its ecosystem comprise an untapped source for many potential drugs. Marine sponges which inhabit mainly in the saline ocean water are considered as one of the oldest form of life. Due to intense concentration of various sponge species and other organisms co- existing in limited extent marine habitats, necessarily makes them highly competitive and complex. Hence most of the sponge species has evolved chemical means to defend against predation. Such chemical adaptations regarded as ‘secondary metabolites’ possess broad-spectrum of biological activity including anti-cancerous agents. In a clinical perspective, cancer still remains as a serious and fatal disease. The various sponge derived bioactive compounds such as alkaloids, diketopiperazine, terpenes, trichoverroids, terpenoids, glycolipids, quinones, prodigiosin derivative, fatty acids and peptides plays remarkable role anti- cancerous activity. Most excitingly some of those compounds are under clinical trial. This review highlights the anti- cancerous activity of marine sponges with special emphasis on various chemical categories, pharmacological products derived from marine sponges and its symbionts as well as the various sponge derived lead compounds and its synthetic analogues currently undergoing clinical evaluation as anti- cancer drugs.

INTRODUCTION: Lifestyle and longevity of human life increases largely the global burden of cancer and hence it continues to be the leading cause of death in economically developed countries and ranks second cause of death in developing countries. The worldwide estimate shows about 12.7 million cancer cases and 7.6 million cancer deaths are estimated to have occurred in 2008 global wise, with 56% of the cases and 64% of the deaths in the economically developing world 1.

In this scenario, for many years researches were essentially focussed on plant species and terrestrial sources as a natural cure to this deadly disease mainly because of its proved beneficial effects by age old folk traditions and moreover due to easy availability of specimens. However, in considering the rich biodiversity of oceans, several studies in exploiting the organisms of the “silent world” results in identification of approximately 22,000 natural products 2. The biological diversity of marine sponges has been explored extensively for its natural products.

Marine sponges, the sessile invertebrates constitutes more than 15, 000 species. It inhabit wide variety of marine and fresh water ecosystem’s and are found throughout tropical, temperate and polar regions. These ancestral metazoans continue to have an economic potential beyond their fundamental roles in the marine ecological processes 3.

These simple invertebrates with its delicate and soft bodied nature wonder researches regarding its protection from pathogens, predators and other creatures of ocean.  This curiosity results vast studies and subsequently the discovery of its chemical weapons or secondary metabolites.

Symbiotic bacteria sometimes occupying 40- 60% of total sponge biomassincludes unicellular cyanobacteria, unicellular bacteria and filamentous bacteria 4. It is reported that sponge hosted diverse microorganisms are metabolically very active in their respective host and it was demonstrated by comparing 16S rRNA gene derived sequence 5. Rare biosphere of sponge microbes of exceptional biodiversity could be identified the adcanced sequencing technologies such as Next generation sequencing 6.

Bioactive compounds as Anti- cancerous Agents: Nature has bestowed with several anti- cancer agents and several of them are significantly improved the management of many types of human cancers. Marine sponge derived compounds are extremely potent in culture and moreover only nanograms of those compounds shows potent inhibitory concentrations. Actin cytoskeleton which plays remarkable role in cancer by promoting cancer cell migration and hence along with microtubules and microfilaments, actin remains as a potential target for anti- cancerous drug development 7.

(iii)Inhibitors of cancer cells of specific types of cancer.

Non- specific inhibitors are promising but they affect the division of healthy cells. Therefore its applications are limited. One o

f the interesting non-specific inhibitors for cancer therapy is the nitric oxide synthetase inhibitors because they may prevent events in the early phases of tumorigenesis. Role of nitric oxide in tumerogenesis is by mediating DNA damage and supports tumour progression through angiogenesis. However, inhibiting nitric oxide synthetase by inhibitors such as imidazole alkaloid Na amine D could also affect other physiological processes such as intracellular or transcellular messaging, regulation of the immunogenic response by T lymphocytes where nitric oxide is normally involved. Most of the currently used cancer drugs are antiproliferative, but they have no specific inhibitory effect on invasiveness, the loss of differentiation or the tendency to metastasize 8.

In case of specific inhibitors, Haliclona sp. derived Salicylihamide A shown to be a selective inhibitor of v-ATPase and has been shown to be 60-fold more cytotoxic to certain cancer cells than to their normal noncancerous counterparts 9. 6-hydroximino-4-en-3-one steroids from Cinachyrella sp. are examples of molecules that can be deployed against a specific type of cancer 10. This steroid shows higher affinity to aromatase, which catalyses the conversion of androgens to estrogens. Hormone-sensitive breast cancer that is dependent on estrogen could be treated by blocking this step.

Protein Kinase C (PKC) enzymes when in higher levels are found to be involved in tumour.  They are believed to be the receptor protein of tumor-promoting phorbol esters. A number of sponge derived compounds acts as inhibitors of PKC and it prevent binding of carcinosarcoma cells to the endothelium.

However there remains other marine sponge alkaloids which proves as one of the lead compounds in drug discovery. Bromopyrrole alkaloids can be extracted from marine sponges of the genera Agelas 13, Axinella and Hymeniacidon.

The alkaloid manzamine A  isolated from a variety of marine sponges, exhibited cytotoxic effects against cancer cells with an IC50 in the range of 1–6 μM after 72 h. Dictyodendrins A-E , were isolated from the Japanese marine sponge Dictyodendrilla verongiformis as telomerase inhibitors 14 . It was reported that, Indonesian marine sponge Leucetta chagosensis produces imidazole alkaloids, naamidines H and I. These compounds show cytotoxicity against HeLa cells with IC50 values of 5.6 and 15 microg/mL respectively 15.

Myrmekioderma sponges contain a glycolipid called Myrmekiosides, a new family of glycolipids with a unique structure of mono-O-alkyl-diglycosylglycerols.  These compounds inhibit proliferation of NSCLC-N6 and A549, which are human non-small cell lung cancer cell lines 18.

Sesquiterpene quinone has been reported to exhibit anti- microbial, anti- HIV, anti- malarial and cytotoxic activities. A study by Aoki et al., 20 shows 5-epi-smenospongorine isolated from the marine sponge Dactylospongia elegans plays an important role for their differentiation inducing activity to K562 cells into erythroblast. These sesquiterpene aminoquinones having differentiation-inducing activities might be a promising agent for the treatment of Chronic Myeloid Leukemia. 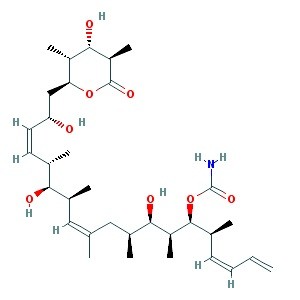 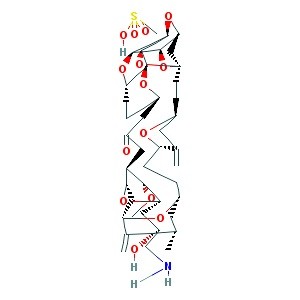 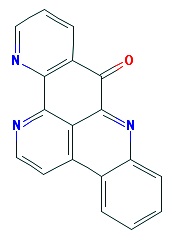 The short review data presented here clearly indicates the great value of marine sponges and its derived compounds including its synthetic analogues as significant pharmacological candidates for drug discovery. Trabectedin became the first marine anticancer drug to be approved in the European Union. E7389, a drug under phase II clinical trial is about to check its efficiency for variety of tumors including ovarian, prostrate, bladder, pancreases, head and neck cancers 28. Table - 2 shows the marine sponge derived compounds under clinical trials.

CONCLUSION: Marine ecosystem is a rich source of bioactive compounds many of which could not be found in terrestrial sources. The main obstacle in using marine sponge compounds for therapy is the low availability of such organisms and moreover, only very small amount of these bioactive substances can be isolated from these reservoirs. Marine sponges attain remarkable attention due to its ability to produce pharmacologically active lead compounds.

A well-known fact is that the symbiotic microorganism associated with sponge species are promising source of ubiquitous secondary metabolites of commercial value. Understanding the optimum ecological conditions which drives the sustainable production of bioactive compounds from sponges and their microbial associates would help in formulating various production strategies.

Continuous effort in synthesising new analogues from already existing compounds, the isolation and characterization of their biosynthesis gene clusters will lead to the development of new antitumor compounds with improved therapeutic potentials.

ACKNOWLEDGEMENTS: The authors gratefully thank the management of Malankara Catholic College for providing ample opportunity to conduct academic research and also the anonymous reviewer’s for their constructive comments on this article.