ABSTRACT: In some disease like thalassemia major long-term transfusion alone inexorably produces the clinical problem of iron overload. Danshen and Milk thistle has been widely prescribed in traditional folk medicine for treatment of liver diseases. In this study we selected eight medicinal plants whose efficiencies had been previously demonstrated in treatment of liver diseases in ancient medicine were studied for their in vitro chelating activity. After preliminary evaluation of these plants in vitro condition, two most efficient plants were nominated for further evaluation in in vivo condition on iron-overloaded mice. The extracts with high iron chelation activity were injected intraperitoneally. Liver sections were stained by haematoxylin and eosin and Perls’ stain. Danshen and Milk thistle had maximum iron chelation activity at in vitro condition. The iron-overloaded mice treated with the extracts showed a significant decrease in plasma iron level and in plasma Fe3+ content. Perl̕ stain improved sensitivity of the test significantly in order to determine the low amount of deposited iron in the liver of iron- overloaded mice treated by the extract. As evidenced by H&E staining, lever sections treated with the extracts displayed a significant decrease in extent of necrotic hepatocytes, fibrous tissues and pseudo lobules. Danshen and Milk thistle extracts exhibited satisfactory potency regarding chelating of excessive iron in iron-overloaded mice.

Long-term transfusion alone inexorably produces the clinical problem of iron overload. In patients with thalassemia who undergo transfusion from infancy, iron-induced liver disease and endocrine disorders develop during childhood and are almost inevitably followed in adolescence by death from iron-induced cardiomyopathy.

In patients with sickle cell anemia, although iron-induced complications appear to develop later, eventually, liver disease with cirrhosis as well as cardiac and pancreatic iron deposition can develop 1. Iron plays a pivotal role in oxidative reactions, resulting in formation of hydroxyl free radicals from peroxidases during Fenton or Haber-Weiss chemistry reaction 3, 4, which are involved in development of cardiovascular diseases. Iron -chelating compounds can circumvent this process 5.

In the Fenton reaction, the hydroxyl radical (OH•) is produced from hydrogen peroxide (H2O2):

The superoxide radical (O2•–) acts to reduce ferric iron, which then reacts with hydrogen peroxide by Fenton chemistry to yield the hydroxyl radical:

Desferal (deferoxaminemesylate (DFO)) and Deferiporine are two drugs extensively used to chelate iron in patients with thalassemia major; however, their significant side effects has made researchers to consider natural compounds, which relatively exhibit lower degrees of deleterious side effects 5, 6. Chelating capacity has been reported for numerous plants and mushrooms, Including Echium vulgare L. and Echium rubrum L. 7, Quercusinfectoria 8, salviasp 9, 10, 11, 12, 13, Glycyrrhiza glabra L. 14, Origanum vulgare L. 12, 15, Citrus sp16, 17, Diospyroslotus 18, 19, 20,  Silybum marianum 21, 22, 23, 24 and Cantharellu scibarius 25, 26, 27 and Pleurotusporrigens 26, 28. Because of their potentially lower risk for human, herbal extracts are of great interest.

Eight medicinal plants whose efficiencies had been previously demonstrated in treatment of liver diseases in ancient medicine were studied for their in vitro chelating activity (Table 1). After preliminary evaluation of these plants in vitro condition, two most efficient plants were nominated for further evaluation in in vivo condition on iron-overloaded mice.

The species were identified by Dr. Masood Azad bakht and deposited in the School of Pharmacy herbarium of Mazandaran University of Medical Sciences. Details on the selected plants and their herbarium numbers are given in Table 1.

The samples were transported to the laboratory and were dried in the oven at 45-6 °C for 48 hour.

TABLE 1: THE NAMES AND CHARACTERISTICS OF A NUMBER OF MEDICAL PLANTS WITH IRON-CHELATING ACTIVITY

***Materials were delipidized using hexane in a decanter at room temperature. After delepidization, the sample was excluded from hexane, allowed to dry for six h, transferred to decanter and subjected to methanol 80% for 72h at room temperature to obtain its hydroalcohol extract.

To assay metal chelating activity, 0.5 ml of 2 mM FeCl2 solution was added to 1 ml of each fraction (800 μg mL-1). The reaction was initiated by adding 5 mM ferrozine (0.2 mL), and the absorbance of the solution was measured by spectrophotometer at 562 nm. EDTA was used as a standard. The ratio of inhibition of ferrozine–Fe2+ complex formation was calculated using the following equation:

Thirty five male mice strain NMRI (20- 25g) were purchased from Pastor Institute (Amol, Iran) and housed in polypropylene cages at an ambient temperature, 23 ± 1°C and 45-55% relative humidity, with a 12 h light: 12 h dark cycle (lights on at 7 a.m.). The animals had free access to standard pellet and water. Experiments were conducted between 8:00 and 14:00 h. All the experimental procedures were conducted in accordance with the NIH guidelines of the Care and Use of Laboratory Animals. The mice were divided into 5 groups as: (A) control, (B) iron-overloaded, (C) DFO, S. virgata and (D) S. marianum. To induce iron overloading, the mice were given 100 mg/kg/day iron by i.p. injections of iron dextran with frequency of 5 days a week for 4 subsequent weeks and then left for 1 month to equilibrate the excessive iron. Mice in the DFO group, as the positive control, were given DFO i.p. injections of iron dextran with frequency of 5 days a week for 4subsequent week with a dose of 1mg/kg/day. To evaluate the iron-chelation capacity of plant extract, the extracts were applied as i.p. injection with a frequency of 5 times a week at concentrations of 200 mg/kg/day for 4 weeks. Normal saline instead was given to the control iron- overloaded group, with the same frequency and duration 9, 34, 35.

At the end of the experiment, the mice were euthanized by diethyl ether. Blood samples obtained directly from the heart chamber of the anaesthetized mice. Their plasma was separated. Livers were removed and preserved in 10% buffered formalin specified for histopathological study.

Determination of iron in plasma by atomic absorption spectroscopy:

Formalin-fixed liver specimens for histology were embedded in paraffin wax. Tissue sections were cut at 5µm and stained by haematoxylin and eosin (H&E) and Perls’ stain.

Statistical analysis was performed using GraphPad Prism 5 for Windows. The results are expressed as Means ± SD. One way analysis of variance (ANOVA) was performed. Newman-Keuls multiple comparison test was used to determine the differences in means. All P values less than 0.05 were regarded as significant. 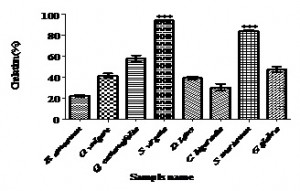 Content of total iron in the plasma of iron overloaded and control mice: 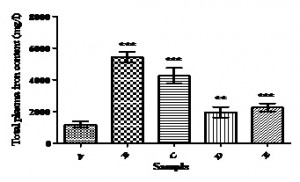 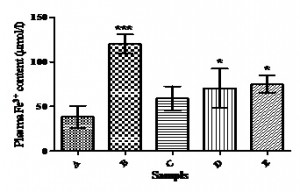 Fig. 4-D and E indicate the results of H&E staining of mice liver tissues treated with the extracts of S. marianum extract and S. virgata extract, respectively. Reduced inflammation occurs in both groups; however, a trivial inflammation happens in some portal areas. 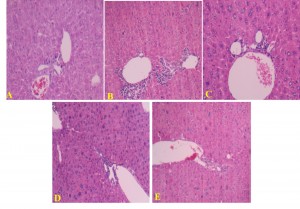 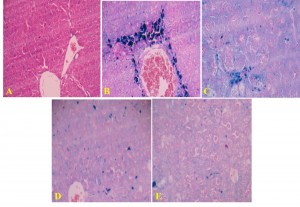 DISCUSSION: Based on the history of Danshen and Milk thistle in treatment of liver diseases in ancient medicine in European and Asia countries, and also for their approved anti-inflammation capacities, we evaluated the iron chelating activities of these plants in iron-overloaded mice 9, 10, 13, 24, 37, 38. Excess iron level in plasma has been reported to cause free radical production, lipid peroxidation and oxidative damages, resulting in iron precipitation and necrosis in liver 9, 13. In this study, we evaluated the hydro alcohol extract of S. marianum and dichloromethane extract of S. virgata on iron overloaded mice and found that they significantly decreased the total plasma content of Fe 3+. This result was further confirmed by pathological analysis what indicated that iron precipitation, inflammation and necrosis had been reduced in hepatocytes upon treatment with the extracts. S. marianum’s flavonolignans, well known as silimarins (Silybin (SBN), Isosylibin (ISBN), Silydianin (SDN), Silycristin (SCN) and Taxifolin (TAX)) 31, 39, contribute to liver health through different mechanisms including the activation of DNA polymerases, increase of cell membrane stability, inhibition of free radicals, and increment of glutathione cellular levels. Silimarin inhibits lipid peroxidation as well 40, 41, 42.

We showed that hydroalcoholic extract of S. marianum decreases the Fe3+ content in iron-overloaded mice. Our finding in this case corresponds to the results of Gharagozloo et al (2008) and Borsari et al (2001) 21, 22.

Salvia has been found to contain a variety of natural compounds with significant antioxidant activity, including phenolic acids (such as rasmic acid, rosmarinic acid, cafeic acid and lithospermic acid), flavonoids and proanthocyanidins. Among these compounds, lithospermic acid has been proven to be efficient in treatment of liver diseases 43. As evidenced by H&E and perlsstainings, the extract of salvia was able to decrease iron precipitation, and tissue necrosis and inflammation. These findings correspond to the results of Gao et al (2013) and Zhang et al (2013) 9. Therefore, reduced inflammation and increased iron chelating in mice liver tissues upon treatment with the extracts of these plant may be due to the presence of silimarin and other natural compounds, like phenols. However, more studies are needed to certify these findings.

CONCLUSION: The extracts of S. marianum and S. virgata exhibit significant iron chelating activity and are able to reduce inflammation and necrosis in mouse liver tissues. More studies are needed to exactly determine which compounds are responsible for these biological activities.