INTRODUCTION: The saturation solubility of a drug in the thin film of pressure sensitive adhesive of a drug-in-adhesive type of transdermal system influences its release rate from the film. There are various experimental methods available to determine the saturated solubility, including detecting of crystalline drug in the polymer film using light microscopy, differential scanning calorimetry, wide-angle X-ray diffraction, infra-red or Raman spectroscopy, measurement of drug release rate, crystal seeding, and drug uptake from a liquid solution or a solid solution 1. Most of these techniques encompass the danger of super-saturation of the polymer film with the drug and a resulting over-estimation of saturation solubility value 2.

The two techniques that appear best to minimize this danger are crystal seeding and drug uptake from a solid solution. The published work citing results using these techniques gives values determined at a single temperature, i.e. room temperature or 25°C 3. We could find no published literature that examines experimentally the effects of temperature on the saturation solubility of a drug in such thin polymer films made from pressure sensitive adhesives. We have measured saturation solubilities only at 25°C 3-5 and have never considered if the technique od drug uptake from solid solution could be done at elevated temperature.

In this short paper we present some results to measure the saturation solubility of the drug scopolamine base in thin films of polyacrylates at 25 °C and 45 °C. This elevated temperature was chosen to improve the likelihood of finding a clearly measurable effect of temperature on solubility, if such exists. We selected the technique of drug uptake from a solid solution developed by Liu et al 1 and extensively further investigated by us 3 - 5. It uses a donor layer of polymer that contains an excess of crystalline drug and is laminated via a separating membrane to an initially drug-free acceptor layer of the same polymer.

A diffusion-driven equilibrium partitioning of the drug between the three layers will start as soon as the laminate is prepared. The acceptor layer will take up sufficient drug to reach its saturation solubility in the polymer. The results of this work demonstrate that this technique works also at elevated temperature and that the saturation solubility is indeed strongly temperature dependent.

The scopolamine base was dissolved in the organic solution of the particular DURO-TAK under investigation. This solution was then cast as a thin liquid film onto a sheet of release liner(for acceptor) or backing film (for donor) using a laboratory-scale film-casting rack (Casting Knife; BYK-Gardner, Geretsried, Germany). The wet film thickness was adjusted via the blade height. This was dried in a forced convection oven at 45 °C for 30 min. If intended as a donor layer, it was left for 7 days at 45 °C to allow crystallization of the drug. If intended as an acceptor layer, it was used immediately after preparation.

The result was a central 3-layer laminate of donor/membrane/acceptor covered on its top and bottom sides by release liner or backing film, respectively. Cylindrical pieces of this laminate of diameter 1.6 cm were then cut-out with a punch and stored at either 25 °C ± 0.2 °C or 45 °C ± 0.2 °C for the duration of the experiment.

Fig. 1A &B show a comparison of the distribution kinetics of the scopolamine for the DURO-TAK 2677 thin polymer films at T = 25 °C and T = 45°C, respectively. These data are presented as two figures for the sake of clarity. The three profiles in each figure show the scopolamine concentrations within the donor layer, cd(t), in the separating membrane, csm(t),and in the acceptor layer, ca(t). Each co-ordinate pair is given as the average ± standard deviation of n = 3 replicate laminates. In both experimental series the donor layer contained initially approximately 30 % w/w scopolamine base and was extensively crystallized.

The acceptor layer was pre-loaded with approximately 1 % w/w of the drug and was isotropic.

It is evident that the equilibrium distribution between the 3 layers is more rapidly reached at the higher than at the lower temperature. Furthermore, the equilibrium saturation solubility in the acceptor layer, cs*, is substantially larger at the higher temperature. The more rapid attainment of equilibrium can be explained by higher diffusivity, D [cm2/s], of the scopolamine within the polymer layers of DURO-TAK 87-2677. This has been demonstrated by simulations using a numerical solution to this 3-layer diffusional problem 4. The values for cs* read-off from the individual plots of ca(t) are 10.7 ± 0.30 % and 16.5 ± 0.54 % at T = 25°C and T = 45 °C, respectively (Table 1). The saturation solubility is therefore increased by more than half at the higher temperature. Because this is only a two-point measurement, the type of relationship between cs* and T cannot be ascertained, for example linear or a Arrhenius-type. It is, however, possible to say that the dissolution of the drug in the polymer film is an endothermic process6.Note that the equilibrium solubility of the scopolamine in the Perthese separating membrane is not measurably increased by temperature in the range examined but remains at the low level of < 0.5 %.

Change to the non-cross-linked DURO-TAK 87-2510 reaches equilibrium after a shorter time, and to a lower value of saturation solubility of the scopolamine at both 25 °C (Fig. 2 a) and 45 °C (Fig. 2 b). The rate of uptake of scopolamine into the acceptor at times up to 2 days is, however, the same with both polymers. With DURO-TAK 2510 this uptake is completed after 2 days, but with DURO-TAK2677 the uptake continues until equilibrium is reached at day 15. This indicates that the diffusivity of the scopolamine is similar in both polymers. The observed shorter time to reach equilibrium in DURO-TAK 2519 is just a result of the higher value of cs* that has to be reached. Again, the equilibrium distribution between the 3 layers is more rapidly reached at the higher temperature. 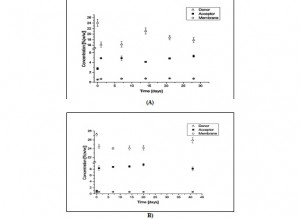 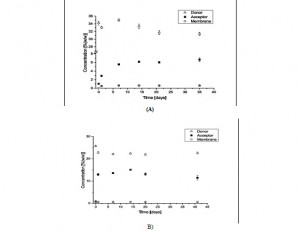 The % recovery, R, of the scopolamine from the three polymer layers is calculated from:

This is a mass balance equation would should account for all of the drug present in the laminate at any time point. The results for recovery are given in Table 2 for the different polymers at the two different temperatures. The time point selected for calculation was at onset of equilibrium distribution at = 1 day for DURO-TAK 87-4098 and 2510 at T = 45°C, and t = 7 days for all DURO-TAKs at T = 25°C and the DURO-TAK 2677 at both temperatures.

In almost all experiments the recoveries deviate only marginally from 100 % (Table 2). The exception is DURO-TAK 2510 at T = 25 °C where only some 80 % recovery is found. The reason for this deviation is evident from the kinetic profiles of this experiment in Fig. 2 a. There is substantial erratic variation in the measured values for cd(t)which will give a large variation in ma(t) a correspondingly large variation in the calculated recovery 12.

One further issue to note is that crystalline material was not observed visually within any of the acceptor layers at the end of these experiments with the three different DURO-TAKS. This means that the drug's saturation solubility in the acceptor has not been exceeded during drug uptake. Super-saturation of the acceptor is also unlikely to have occurred, otherwise the set of three profiles in each of the Figures would not so clearly have reached equilibrium.

CONCLUSION: The results of this work allow the following conclusions to be drawn:

ACKNOWLEDGEMENT: We gratefully acknowledge the financial support of the Deutsche Forschungsgemeinschaft (Le 626/9-2) for this project.