SCHWANNOMA PRESENTING AS A GYNAECOLOGICAL MASS WITH PREGNANCY- A CASE REPORT

SCHWANNOMA PRESENTING AS A GYNAECOLOGICAL MASS WITH PREGNANCY- A CASE REPORT

Schwannomas are usually benign tumors that result from the proliferation of the perineural cells. Since these tumors are very rare, misdiagnosis is common. Clinically, these tumors may present as a cranial neuropathy, abdominal or soft tissue mass, intracranial lesion, or with spinal cord compression. Histologically, these tumors are encapsulated, highly vascular, and composed of a homogenous pattern of biphasic fusiform-shaped cells that may have a palisaded appearance. We present a case of nineteen years old primigravida with 22 weeks pregnancy with an adnexal mass. The diagnosis of schwannomas was made on laprotomy and confirmed on histopathological examination. The case is reported not only due to its rarity but due to its association with pregnancy and its successful outcome.

INTRODUCTION: Asymptomatic adnexal masses have become common findings due to the widespread use of the transvaginal ultrasound. Most asymptomatic adnexal masses are benign, but malignancy should still be excluded.  Adnexal masses occur in approximately one in 600 pregnancies, of which the risk of malignancy is up to 5%. Benign schwannomas are generally slow growing and painless tumors originating from the Schwann cells of the peripheral nerve sheaths and predominantly occurs in females in between second and fifth decade of life 1. 0.3-3.2% of benign schwannomas is found in retroperitoneal locations 2. As these tumors are usually painless, symptoms occur due to expansion; hence diagnosis and treatment are usually delayed as was seen in the present case.

CASE REPORT: A nineteen years old primigravida with six months pregnancy came to hospital with complaints of back pain and mild pain in abdomen on and off since five months. There was no bowel or bladder dysfunction. Clinical examination revealed no abnormalities of general parameters. On per-abdomen examination uterine height corresponded to 22 weeks of gestation.

A large mass of the size of 13´15 cms was visible and palpable in the left hypochondrium with delineable margins, mass was firm in consistency with irregular surface and restricted mobility. Abdominal ultrasound revealed a left adnexal mass of size 12´16 cms with homogenous consistency and a viable intrauterine pregnancy of 22 weeks of gestational age.

With the provisional diagnosis of benign ovarian cyst, necessary preoperative investigations were done and the patient was prepared for laprotomy and proceeds to the surprise of the surgeons, there was no adnexal mass intraoperatively and both tubes and ovaries were normal. Instead a highly vascular mass of size 12´16 cms was seen intraperitoneally in the left hypochondrium (Fig. 1). Bowel loops were seen adherent to the mass. The tumor was shelled out with blunt finger dissection.

Due to highly vascular adhesions between the bowel and the mass, bowel injury could not be avoided during bowel separation from the mass. Thus resection of the bowel followed by colostomy was done. 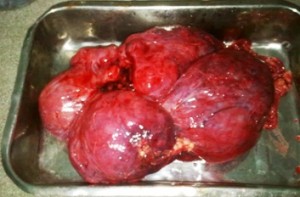 Mass was delivered through the incision and complete haemostasis was obtained with haemostatic sutures. The postoperative period was uneventful and suture removal was done on tenth day. Patient was counseled regarding colostomy care and was asked to follow up every two weekly with the plan to close the colostomy site after three months. Histopathology of the tumor was suggestive of schwannoma. Verocay bodies, antoni A and antoni B areas were present focally (Fig. 2). 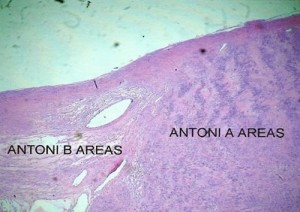 FIG. 2: HISTOLOGICAL SECTION OF TUMOUR DEMONSTRATING ANTONI A AND ANTONI B AREAS

Patient had no motor or sensory disturbances after surgery. Patient somehow lost to follow up and directly came at 35 weeks of gestation with preterm premature rupture of membranes and delivered a preterm baby weighing 2.7 kg with no fetal or maternal complications. Her colostomy site was healthy and she had no bowel and bladder complaints. Patient was discharged on third postnatal day and was asked to follow up after six weeks for closure of colostomy site followed by anastamosis. Till the time of reporting this case, patient had not come for follow up.

DISCUSSION: Mostly patients of schwannoma presents with unspecific lower back pain and poorly localized pain and discomfort 3. Although, occurrence of schwannoma is extremely rare, a thorough abdominal examination should always be done when investigating a patient for lower back pain or sensory disturbance around buttock or saddle area. Hence, the diagnosis is mainly of exclusion, but confirmation is done mainly on histopathological examination. Schwannoma may originate at any anatomical site.

Rarely, does a schwannoma originate in the pelvis and present as retroperitoneal pelvic mass. Cases have been reported, where schwannoma coexisted with pregnancy 4 and was discovered incidentally, like in the present case. Wijingarden et al., reported a case of pregnancy with pelvic neurilemmoma which was a rare case of disproportion and indication for elective caesarean section 5. Also a similar case was reported by Gwozdz et al where giant neurilemmoma of the pelvis was responsible for labor obstacle and the cause of inability to perform curettage of uterine cavity 6.

An interesting case was reported in 1996 by Insegno et al of a patient with 35 weeks pregnancy with schwannoma of the pelvis which was responsible for intestinal obstruction, caused by intussusception of the small bowel 7. In the present case, patient reported to us in second trimester, hence by timely diagnosis and early intervention, all the above reported complications were avoided.

However, the diagnosis was made only intraoperatively and confirmed on histopathological examination. Cases have been reported in literature, where just like the present case, schwannoma presented as adnexal mass, confusing it with the diagnosis of ovarian tumor 8, 9.

Thus, misdiagnosis is very common in these cases, as this tumor is very rarely encountered in clinical practice and preoperative imaging method can be only suggestive of the diagnosis. MRI is the imaging procedure of choice as it demonstrates the tumor location and its relation to the surrounding structures, but due to its heterogeneity and degeneration in some tumors, it may mimic malignancy. Hence, FNAC is essential to verify the diagnosis before surgery. Treatment of choice is tumor excision in toto, as recurrence is not expected. Adjuvant therapy is therefore not administered.

Surgery can be hazardous, especially in cases where tumor is very hyper vascular, like in the present case or when the tumor is adherent to presacral venous plexus. Severe hemorrhage can be encountered during extraction of the tumor and establishing haemostasis may become difficult in some cases as was seen in the case reported by Carpenter where the patient died due to uncontrolled hemorrhage from severing the right common iliac artery during a difficult dissection of schwannoma. In a case reported by Foote, an attempt to excise a large retroperitoneal schwannoma was abandoned because of danger of uncontrolled hemorrhage 1.

Thus, whenever intrapelvic or retroperitoneal schwannoma is suspected, thorough preoperative planning, involvement of specialist of other subspecialties should be contemplated and sufficient amount of blood and blood products should be readily available. In the present case, apart from hypervascularity of the tumor, vascular adhesions were encountered between the tumor and the bowel, dissecting which bowel injury occurred and bowel resection followed by colostomy had to be performed.

CONCLUSION: Intrapelvic or retroperitoneal schwannoma may remain symptomless or might just present with nonspecific lower back pain causing delay in diagnosis and treatment. MRI is the imaging modality of choice for localisation and to know the nature of such masses, which can be confirmed by aspiration cytology. As these tumours are benign and recurrence is not seen, surgical removal in toto, without adjuvant therapy is the treatment of choice. Thus the present case is reported not only due to its rarity but due to its association with pregnancy and its successful outcome.