ABSTRACT: Suddhi is a unique process of detoxification which is employed topotentiate as well as enhance therapeutic properties the effect of raw drugs. Nabhi (Aconitum ferox), a herbal poisonous rhizome commonly known as aconitum is used extensively in various Siddha formulations, with great therapeutic significance. Siddha system recommends the administration of Nabhi only after suddhi (purification) in different medias. Hence in this pretext one of the purification process of Nabhi mentioned in Theraiyar Yemaga Venba book gets validated scientifically with alleged reasoning through estimation of aconitine by HPTLC method and along with physicochemical parameters.The amount of Aconitine present is found to be reduced from 0.2107 % to 0.00 % after purification. In this present scenario may be presumed that the toxic compound aconitine   might   have been underwent transformation into some nontoxic compounds like Benzyl aconine and Aconine.

The word “Suddhi” means “to get rid of impurities”. Suddhi is a unique process of detoxification which is employed to purify/detoxify and to potentiate the effect of various kinds of raw drugs used in Siddha formulations with a view to reduce their toxic contents /effects as well as to enhance their therapeutic properties 5. In Siddha system, all  the drugs  must be purified individually as told in the text before converting them into medicine; the process of purification of drugs are  variable according to the  the medicine that is to be prepared. Since Many Siddha formulations containing Nabhi roots become more popular, methods for purification of Nabhi is in demand. Besides that since now no scientific validation of changes that occurred during purification process of Nabhi is carried out.

Hence in this pretext one of the purification process of Nabhi gets validated scientifically with alleged reasoning through estimation of aconitine by HPTLC method and along with physicochemical parameters.

MATERIALS AND METHODS: Nabhi was collected from reputed shop in Assam, identified and authenticated by botanist, National institute of Siddha, Chennai. (Voucher No: NISMB 1262014)

Method of Purification: 35gm of Nabhi was taken and soaked it  in 210 gm of butter milk (Media 1),  placed  in sunlight  from sun rise to sun set, continued this process  for 10 days, after that repeated the same with cow’s butter (Media 2). Again the same process was repeated with cow dung solution for another 10 days (Media 3). Then take the sample out and was dried in sun light for another two more days 7.

Organoleptic evaluation, Physiochemical analysis, Analysis of microbial load were done for Sample 1 and 4 8-11. The pH of aqueous extract of sample 1,  sample 4 and all the medias used in different stages of purification process were estimated as per the method prescribed in the Indian standard (IS) -6940(1982) using DIGISUN digital pH meter. Preliminary phytochemical analysis were done for Sample 1, Sample 4 and all the medias used individually 12. Aconitine level estimated in sample 1&4  by TLC and HPTLC analysis as perthe procedures recommended for the analysis of aconitine Wagner H and  Bladt S, 1996  13-4 .

Morphological Examination: Organoleptic evaluation of sample 1 and sample 4 described below in Table 1.

Physico -Chemical Analysis: Physico- chemical analysis of sample 1 and sample 4 were done and the results are illustrated in Table 3. The pH of aqueous extract of sample 1, sample 4 and all the medias used in different stages of purification process were shown in Table 4-7.

Foreign matter: The sample 1 and sample 4 were tested for the presence of any foreign matter, but the given samples were free from them.

pH of Nabhi and Various Medias at Different Stages of Purification Process.

TABLE 4: pH OF ALL THE SAMPLES OF NABHI OBTAINED DURING VARIOUS STAGES OF PURIFICATION PROCESS

TABLE 5: AVERAGE CHANGE IN pH OF MEDIAS   BEFORE AND AFTER PURIFICATION

Preliminary Phytochemical Screening: Preliminary phytochemical analysis were done for aqueous extract of sample 1, 4 and the medias used in various stages of purification procedure so as to detect the Phytoconstituents present them. The result of the analysis were illustrated in Table 6.

Determination of Microbial Load: The determination of microbial load as described below was carried out in sample 1 and 4 as per the WHO guidelines (Anonymous 1998) and the results were indicated in Table 7.

Heavy Metal Analysis: In this study heavy metal analysis was done for both the samples 1 and 4 so as to determine heavy metal contamination as per standard WHO Guidelines using AAS. The results were shown in Table 8. 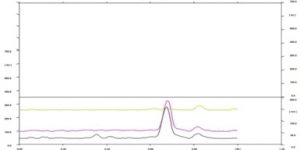 DISCUSSION: In this present study an attempt was made for deriving a monograph for it and to standardise the purification process by using some sophisticated instrumental studies as per WHO Guidelines 15. On morphological examination it was revealed that there were considerable changes in organoleptic characters in raw sample and purified sample. Besides it was also interesting that there were some observable changes found in the media used. Physiochemical evaluation is still of important in deciding identity of a drug. Ash value determination furnishes the basis for judging the identity and cleanliness of any drug and gives information relative to its adulteration/ contamination with inorganic matter. Here there was considerable change in ash value from 3.46% to 1.19%, indicating reduction impurities during purification procedure. Loss on Drying of the Nabhi before and after purification (10.52% to 11.33 %) was found within acceptable range (1%-20%), which implies that the drug can be stored for a long period and would not easily be attacked by microbes and moulds. As acid-insoluble ash the samples decreases after purification process (0.82 to 0.53) shows that the reduction in of inorganic adulterants 16-8. Alcohol, water soluble extractive of raw sample reduced from 4.46%, 17.72% to 3.31%, 3.38% in purified sample respectively. However the water soluble extractive values showed marked reduction after purification   indicating loss of water soluble constituents from Aconitum ferox18.

The microbial load was detected within normal limits in the both the samples   ensured safety and efficacy of drug during ingestion. It was noted that total microbial count found to be 8× 103 in Sample 1as compared 5× 103 in sample 4. The physicochemical and phytochemical characteristics obtained confirmed the effectiveness and stability of the Drug after purification 21-2.

Apart from these as per WHO Quantitative analysis is also essential to ensure safety and efficacy of drug 23-5. Based on this the drug was quantitatively analysed for heavy metals Content by AAS. Heavy metal analysis Complied with the limits prescribed.

The reduction of aconitine can be explained by means of hydrolysis 28-9. This may be the possible mechanism that Aconitine undergoes hydrolysis in dilute acid or basic medium. Here the used medias like butter milk and butter are acidic and the   Cow dung is essentially alkaline in nature. Sunlight is essential to increase the temperature of the medium, this suggest the possibility of   hydrolysis of aconitine, readily to less toxic material like aconine and benzyl aconine 30.

The Physical and chemical changes that occurs in medias also played an important role to assure the detoxification of Nabhi. It may be speculate that emulsification property of butter milk and alkaline nature of cow dung possibly mitigates the toxic alkaloid in Nabhi.  From this it can be implicated that the medias like butter milk dissolves the soluble polar compounds like aconitine by its emulsificant property. The results obtained from the study could be utilized as a reference for setting limits for the reference standards for the quality control and quality assurance of Aconitum ferox.

CONCLUSION: From this study, it can be concluded that the concept of detoxification procedure as mentioned in Siddha text provides contemporary evidence with good scientific background. These explorations will definitely help to set a standard procedure for purification of Aconitum ferox. Subsequent validation for studying it’s detoxification through pharmacological profile is essential.