SCREENING AND ISOLATION OF BACTERIA FROM KANJAMALAI HILL FOR ANTIMICROBIAL ACTIVITY

SCREENING AND ISOLATION OF BACTERIA FROM KANJAMALAI HILL FOR ANTIMICROBIAL ACTIVITY

ABSTRACT: Many microorganisms thrive on the abundant nutrients in the rhizosphere and they produce antagonistic metabolites. The present study is an attempt to investigate the potent bacteria producing antibiotics against pathogenic microorganisms from the rhizosphere soil samples of Kanjamalai hills, Salem district, Tamilnadu, India. A total of 6 isolates of bacteria was obtained and screened for inhibitory activity against selected opportunistic pathogens. Potent bacterial isolate (A6) was identified as Pseudomonas aeruginosa by cultural, morphological and biochemical characterization. The antimicrobial activity of broth culture of Pseudomanas aeruginosa was also observed. The antimicrobial active compound was partially purified from the broth culture and its concentration was estimated to be 373.086 µg/ml. The obtained protein was separated in SDS-PAGE and its molecular weight was determined as 66.4 kD, 44.3 kD, 29.0 kD, 20.1 kD and 14.3 kD using standard molecular markers. The results showed that the isolated strain has high potential against Bacillus megaterium and Aspergillus niger. It can be further investigated to identify the

INTRODUCTION: Microbes constitute an admirable array of defense compounds with various applications in the field of ecology, pharmacology, agriculture, veterinary etc., 1. Screening for the microbial species is an important aspect as there is a remarkable source for the production of structurally diverse secondary metabolites that possess pharmaceutically relevant biological activities 2. There are three major microbial groups involved in the production of antibiotics. It includes bacteria, actinomycetes and fungi. Many taxonomic groups in bacteria produce antibiotics

In fungi, the antibiotics produced only by the aspergillaceae and moniliales are of practical importance 3. The greatest variety of antibiotics is found in different genera of actinomycetes 4. A compilation of microbial sources of antibiotics, discovered in United States and Japan reveals that approximately 85% are produced by actinomycetes, 11% by fungi, and 4.5% by bacteria. The statistical overview of bioactive metabolites produced by different groups of microorganisms is provided by many researchers 2.

Antibiotics are one of the most important commercially exploited secondary metabolites produced by the bacteria and employed in a wide range.  It is highly revolutionized for the last 5 decades. About 17000 antibiotics from different microbial sources have been isolated 2. The improper use of antibiotics since their introduction into the medical practices makes them to erode rapidly due to the shift in the balance towards multi drug resistant pathogens. Almost one third to one half of antibiotics prescriptions are counted unnecessary. The resistance of pathogenic microorganisms to commonly used antibiotics is presently an urgent focus of research. Pharmaceutical companies have developed many new antibiotics to replace old which became ineffective due to resistance. The new drugs were often more potent versions of earlier compounds 5. Still there is an emerging cri­sis in the development of antibiotic resistant microbial pathogens and toxicity of several antibiotics in use 6, 7. Natural products are immense source for important novel compounds having antagonist activity against pathogenic microorganisms. The need to discover and develop more effective antibiotics with unique modes of action is greater than ever 8.

The unexplored regions around the world are selected for the search of novel compounds. Kanjamalai hill situated in the North Western foothill of Eastern Ghats is 16 kilometers away from the city of Salem, Tamilnadu, India. The forests are mostly of a mixed deciduous and irregular type of varying density. The trees in this region are very small with stunted growth. Ethnomedicinal exploration was conducted in the various localities of the Kanjamalai Hills and numbers of valuable data on the uses of indigenous medicinal plants were reported 9. The hills provide diverse habitats for faunal and floral species. Hence it is selected to screen bacteria for producing antibiotics for the first time.

Pseudomonas is Gram-negative, aerobic rod, polarly flagellated, non spore forming bacteria. They are competitive colonizers of the rhizosphere of various crop plants and have broad spectrum antagonistic activity against plant pathogens 10-14. Some species of Pseudomonas can also produce levels of hydrogen cyanide that are toxic to certain pathogenic microorganisms 15. The antibacterial effects against Xanthomonas citri pv. Citri and MRSA strains were reported early 16, 17. The present study was designed to screen and isolate potent bacteria from the rhizosphere soil samples of medicinal plants of Kanjamalai hills, Salem, Tamilnadu, India for antimicrobial activity against human pathogens.

Rhizosphere soil samples was collected using clean, dry and sterile polythene bags from five medicinal plants such as Azadiracta indica (A), Senna auriculata (B), Abreus precatorius (C),  Aloe vera (D) and Acalypha indica  (E), of Kanjamalai Hills of Salem district of Tamilnadu. The samples were air dried at room temperature for 1 day and then used for isolation of bacteria.

Enumeration and isolation of bacterial isolates:

Enumeration and isolation of bacteria from the soil sample were performed by serial dilution method 18. 1ml of each diluent was spreaded on nutrient agar plates and incubated at 37°C for 24 hours. After incubation, the morphological appearances are observed, the colonies are counted using colony counter and the isolates were selected, sub cultured and maintained for further studies.

The antimicrobial activity of the selected isolates from the soil samples were determined by inoculating against the different test organisms, bacteria such as Bacillus megaterium, Salmonella typhimurium, Klebsiella pneumonia and fungi Aspergillus niger by perpendicular streak method in Mueller Hinton Agar medium plate. The plates were incubated at 37°C for 1day for Bacteria and for 3 days for Fungi and the antibiotic sensitivity were tested. The zone of inhibition of each isolates against pathogenic bacteria and fungi was observed and compared. The isolate showing higher zone of inhibition is selected for further research.

In order to produce the antimicrobial compound, the isolated bacteria was inoculated in a minimal media containing glucose 3gm, sodium nitrate 0.6gm, potassium dihydro phosphate 0.1 gm, potassium chloride 0.5 gm, magnesium sulphate 0.02gm, ferrous sulphate 0.01 gm, peptone 5gm, beef extract 3 gm, distilled water 100ml at pH 7.5. It was inoculated in a 250 ml conical flask and kept in a rotary shaker at 200 rpm at 37°C for 48 hrs. After incubation, the culture was centrifuged at 10000 rpm for 30 minutes and the cells are separated from the broth. The supernatants were collected to evaluate the antimicrobial activity.

The antimicrobial activity of the supernatants collected was checked by agar well diffusion method in the plates containing the pathogenic organisms. The zone of inhibition was observed.

Purification and identification of active compound:

The active compound from the supernatant was partially purified by cold acetone method. The extract was centrifuged for 10 minutes at 13,000-15,000 x g. The supernatant formed was decanted and properly disposed off, without dislodging the protein pellet. The acetone was allowed to evaporate from the uncapped tube at room temperature for 30 minutes. Pellet is not allowed to over dry because it may not dissolve properly. Appropriate quantity of phosphate buffer is added for the downstream process and vortexed thoroughly to dissolve protein pellet. The quantitative analysis of protein is done by Lowry’s method 20. The protein is then separated by SDS- polyacrylamide gel electrophoresis. By using markers of known molecular weight, the molecular weight of the partially purified proteins was determined. The proteins are then visualized by silver staining.

Isolation and enumeration of bacteria from Soil Sample: Visible colonies are formed in the spread plate after incubation at 37°C for 24 hours. It was found that in the plate of 10-3 dilution of sample A 82 colonies are formed, sample B had 62 colonies, sample C had 103 colonies, sample D formed 79 colonies and sample E formed 107 colonies. Due to similarity in morphological and cultural characteristics 6 isolates (A6, D1, D5, E1, E6 and E14) were selected for screening of active compound for antimicrobial activity.

Screening of the antimicrobial activity of 6 selected isolates (A6, D1, D5, E1, E6 and E14) was carried out against 3 pathogenic bacteria and 1 fungus. All 6 isolates showed inhibitory activity against at least one selected pathogenic strain. Almost all the strains inhibited the growth of the pathogenic organisms but the size of zone of inhibition varied.  Among the 6 bacterial isolates, A6 showed maximum zone of inhibition of about 8 mm against B.megaterium and also showed activity against A.niger (Fig.1). Hence it is selected for the production of antimicrobial compound. The size of zone of inhibition was tabulated (Table 1).

TABLE 1: ANTAGONISTIC ACTIVITY OF THE ISOLATES WITH THE PATHOGENIC ORGANISMS

Cultural, Morphological and biochemical characteristics: The Morphological and biochemical characteristics of A6 were studied to identify the antagonistic bacteria. The results showed that the selected isolate was large, translucent, greenish, motile colonies (Table 2). They are Gram negative, short rod with no spore formation (Fig.2). The optimum temperature of growth was found to be 37°C. The results of biochemical tests (Fig. 3-5) were summarized in the Table 3. 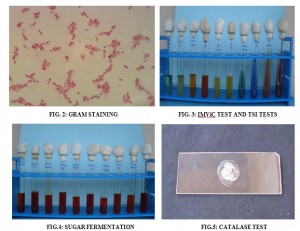 TABLE 2: GROWTH MORPHOLOGY OF A6.

TABLE 3: THE BIOCHEMICAL CHARACTERISTICS OF A6.

The results indicated that the antagonistic bacterium (A6) isolated from the rhizosphere soil sample of Azadiracta indica was Pseudomonas aeruginosa. This bacterium has potent activity against the selected pathogens Bacillus megaterium and Aspergillus niger although no activity was found with Salmonella typhimurium, Klebsiella pneumonia. Similarly, several Gram negative bacteria with a predominance of Pseudomonas species such as P. resinovorans, P. putida B1, P. fluorescens, P. fulva, P. viridilivida and P. fluoresecens 21-24 were isolated and showed antagonism to fungi and bacteria.

The zone of inhibition of the broth culture of Pseudomonas aeruginosa against the pathogen B.megaterium was observed (Fig. 6) by varying the concentration of the supernatant in the agar well. The zone was well developed and the results are tabulated in Table 4. Previous reports has showed that the Pseudomonas species produces several antibiotics with high specificity against microorganisms like Bacillus subtilis Proteus vulgaris, Salmonella typhi, Streptococcus mutans 24, 25 which is in line with our study. 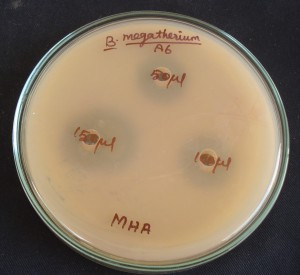 From the crude extract the active compound for antimicrobial activity was partially purified by cold acetone precipitation. The Concentration of protein in the partially purified sample was calculated by Lowry’s method and it was estimated to be 373.086 µg/ml (Table 5).

The proteins are then detected by SDS-PAGE electrophoresis using standard molecular ladders. The molecular weights of these bands were estimated to be 66.4 kD, 44.3 kD, 29.0 kD, 20.1 kD and 14.3 kD. These bands (proteins) may be isoenzymes or the different subunits of the same enzyme protein on electrophoresis gel. The protein profiling in SDS-PAGE was shown in Fig 7. 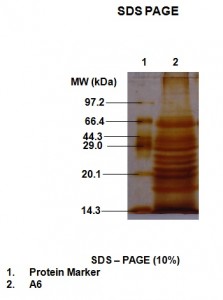 Our study along with literature review established that Pseudomonas species has antibacterial potential of which are not widely known as antibiotic producers. They are highly potential in controlling bacterial pathogens of health significance.

CONCLUSION: This study reveals the importance of microorganisms present in the rhizosphere soil samples from Kanjamalai Hills, Salem, Tamil Nadu, India. Bacteria - bacterial pathogen interactions are having an increased interest in the area of biocontrol. The Pseudomonas aeruginosa isolated from Azadiracta indica is highly potential in controlling pathogens. Further purification and characterization are recommended to know the quality, novelty and commercial value of these antibiotics. The strain improvement by the mutagenic agents may still enhance the activity hence results in development of a potential antibiotic.

ACKNOWLEDGEMENT: We greatly thank Acme ProGen Biotech (India) Private Limited, Salem for their kind help in providing facilities to carry out a part of the research.