INTRODUCTION:  Enzymes are delicate protein molecules necessary for life. Proteolytic enzymes are ubiquitous in occurrence, being found in all living organisms, and are essential for cell growth and differentiation 1. The extracellular proteases are commercial value and find multiple applications in various industrial sectors. Although there are many microbial sources available for producing proteases, only a few are recognized as commercial producers 2. Of these, strains of Bacillus sp. dominate the industrial sector 3.

Fibrinolytic enzyme is well known as a sub class of protease, which has an ability to degrade fibrin 4, 5, 6, 7, 8. Blood clots (fibrin) are formed from fibrinogen by thrombin (EC 3.4.21.5) and are lysed by plasmin (EC 3.4.21.7), which is activated from plasminogen by tissue plasminogen activator 9. Deposition of fibrin in blood vessels normally increases thrombosis, resulting in myocardial infarction and other cardiovascular diseases 10, 11.

Extracellular proteases produced by Bacillus species are of main interest from a biotechnological perspective, and are not only in scientific fields of protein chemistry and protein engineering but also in applied fields such as foods and pharmaceutical industries. The genus Bacillus contains a number of industrially important species and approximately half of the present commercial production of bulk enzymes derives from the strains of Bacillus.

In this study, an attempt was made for the screening and isolation of fibrinolytic protease producing mesophilic bacteria from slaughter housesvarious regions of Bangalore.

Collection and isolation of sample: Samples were collected from slaughter houses of beef, chicken and fish at Soldevanahalli, Chikkabanavara, Devasandra, K.R. Puram, Tannary road and Yashwanthpur in and around Bangalore, Karnataka, India. The samples were labeled after collected. These were spread onto isolation media (Fibrin plate agar) and incubated at 37°C for 24 hours after serial dilution of 10-1 to 10-6.

Screening of Fibrinolytic proteases production by plate assay: The isolates were screened for fibrinolytic protease activity in triplets. This was done by inoculating the organisms on the modified fibrin plate agar 35. Containing 1.2%w/v agarose, 0.4%w/v human fibrinogen and 20U/ml human thrombin in a petridisc and incubated at 37oC for 24 hours. A clear zone around the growth of the bacteria was indicated to fibrinolytic proteases activity. 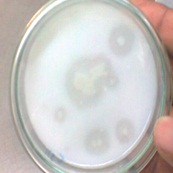 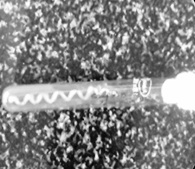 The colonies which were positive and negative for grams staining, capsule and endospore staining were considered for further studies (Table 3 & 4). The selected colonies were streaked on fibrin plate agar. The plates were subjected to incubation for a period of 24 hoursat 37oC. The plates which showed clear zone around the streaked area of test organism were selected as fibrinolytic proteases producing strain.

The organisms named (Table 2) showed the inhibition zone and were subjected to various biochemical tests (Table 4).

ACKNOWLEDGMENTS: The authors would like to thank the chairman Acharya Institutes, Sri B. Premnath Reddy, for providing laboratory facilities and supporting this research work.