ABSTRACT: Seven pathogenic isolates with clinical history were procured from the Department of Microbiology, RMMCH, Annamalai University, Chidambaram, Tamil Nadu. Among them, five isolates (S1-S5) showed multi-drug resistance to the selected antibiotics. Maximum multi-drug resistance was exhibited by four Gram negative isolates (S1, S2, S4 and S5). Initial qualitative analysis of these four isolates for biofilm forming efficacy by the Congo-Red Agar method revealed that three of these isolates (S1, S2 and S4) were biofilm producers. Maximum biofilm formation was exhibited by S4. Further qualitative analysis of biofilm formation by S4 using the Tube Adherence method yielded a positive result. Biofilm forming efficacy of S4 was then quantitatively analyzed by a spectrophotometric assay. An optical density of 0.38 was recorded at a wavelength of 540 nm, which was significantly higher than the O.D. value of the control (0.05), confirming biofilm formation by the isolate.

INTRODUCTION: Developing drugs against prokaryotic cells like bacteria was comparatively easier than developing drugs against eukaryotic cells, like fungi, protozoa and helminths. This was because, at the cellular level, eukaryotic cells resemble human cells in structure, while prokaryotic or bacterial cells were markedly different. The lip polysaccharide outer layer of Gram-negative bacteria and the porins, forming water channels across this layer, play a pivotal role in the selective toxicity of antibacterial action. Generally, small, hydrophilic drugs pass through the porin channels while larger lipophilic drugs do not.

Hence, such drugs were not as effective against Gram-negative bacteria compared to their effectiveness against Gram-positive bacteria. The principal objectives of the present study were to procure the pathogenic isolates with clinical history and to determine the antibiotic resistance pattern of the collected isolates towards selected antibiotics. Qualitative methods analyzed the biofilm-forming efficacy of the selected multi-drug resistant isolates.

Culture Methods: The collected test organisms were cultured in a nutrient agar medium.

Kirby Bauer Sensitivity Assay: 9.5g of Mueller Hinton Agar powder was dissolved in 250ml of distilled water and autoclaved. The sterilized medium was then poured into 12 sterile petri plates. The plates were then inoculated with different bacterial cultures using the spread plate technique. Sterile swabs were used to make uniform lawns. Discs of the selected antibiotics were then placed on the plates, following which the plates were incubated at 37°C for 24 h 1. Determination of Multiple Antibiotic Resistance (MAR) Index

Congo-Red Agar Method: The medium was prepared by adding 7.4 grams of Brain-Heart Infusion (BHI) broth, 1 gram of sucrose and 2 grams of agar dissolved in 200ml of distilled water and autoclaved for 15 minutes at 121 °C.

Congo red stain was prepared separately as concentrated aqueous solution (0.16 grams) in 3ml of distilled water) and autoclaved for 15 min at 121 °C. The stain was then added to BHI agar at 55 °C. The BHI agar medium was then poured into 9 sterile petri plates. The plates were inoculated with the test organisms and incubated at 37°C for 24-48 h 1, 3.

Tube Adherence Method: A loopful of test organisms was inoculated in 10 mL of trypticase soy broth with 1% glucose in test tubes. The tubes were incubated at 37°C for 24 h. After incubation, tubes were decanted and washed with phosphate buffer saline (pH 7.3) and dried.

Tubes were then stained with crystal violet (0.1%). Excess stain was washed with deionized water. Tubes were dried in inverted position. The scoring for tube method was done according to the results of the control strains 4.

Biofilm formation was considered positive when a visible film lined the wall and the bottom of the tube. The amount of biofilm formed was scored as 1-weak/none, 2-moderate and 3-high/strong. The experiment was performed in triplicate and repeated three times 5.

Tube Adherence + Spectrophotometric Assay: A loopful of Pseudomonas isolates was sub-cultured in 2mL of Tryptic Soy Broth and incubated at 37°C for 24 hours. To each tube an additional amount of 2 ml of Tryptic Soy broth with 2% glucose was added, and tubes again incubated at 37°C for 24 h. After incubation, the growth medium was discarded. Each tube was washed with Phosphate Buffer Saline (PBS) to eliminate the unbound bacteria. To evaluate the formation of biofilm, remaining attached bacteria were fixed with 2 ml of 99% methanol.

After 15 min the tubes were emptied and left to dry. The attached film was stained for 5 min with 2 ml of 2% crystal violet. Excess stain was rinsed by placing the tubes under running tap water. Tubes were air-dried, and the dye attached to cells was dissolved in 1.5 ml of 33% glacial acetic acid. The optical density (OD) of each tube was determined at 540 nm. The blank was determined by measuring OD of a tube filled with PBS, and positive control was determined by measuring OD of the tube with pure culture 6. All isolates were tested in triplicate. The absorbance value (OD) of the test organism was interpreted 7.

The isolates were obtained from the urine samples of patients of various age groups, suffering from urinary tract infection (UTI), admitted at RMMCH. The isolates of Escherichia coli, Klebsiella, Citrobacter, Pseudomonas, Proteus, Enterococcus, and Staphylococcus, have been authenticated as S1, S2, S3, S4, S5, S6 and S7, respectively.

Kirby Bauer Sensitivity Assay: The antibiotic susceptibility pattern of the procured pathogenic isolates with clinical history can be observed in Figures 8-16. The same has been summarized in Table 2. S1-S5 constituted the Gram-negative isolates, while S6 and S7 were Gram-positive isolates. The Gram-negative isolates, S1-S5, were treated with five antibiotics: Amoxicillin / Clavulanic acid, Cefixime, Ciprofloxacin, Streptomycin and Tetracyclin. The absence of clear zones was prominent in S1 under the action of all antibiotics except Cefixime, which induces a small zone of 10 and 11. While one subculture of S2 exhibited lack of clear zone formation against all the antibiotics used, another subculture exhibited the formation of clear zones measuring 18, <10 and 17 against Ciprofloxacin, Streptomycin and Tetracyclin respectively, maintaining a lack of zone formation against Amoxicillin / Clavulanic acid and Cefixime.

The first subculture of S7 exhibited clear zones measuring 26, 20, 21, 12 and 17, while the second subculture showed clear zones measuring 22, 13, 22, 13 and 17 against Ciprofloxacin, Streptomycin, Tetracyclin, Oxacillin and Vancomycin, respectively. In this study, Amoxicillin / Clavulanic acid and Cefixime were used exclusively against Gram-negative isolates (S1-S5), while, Oxacillin and Vancomycin were used exclusively against the Gram-positive isolates (S6 and S7). Based on the zone measurements summarized in Table 2, the resistance pattern of all the pathogenic isolates with clinical history was tabulated in Table 3. It was noted that, with the exception of the second subculture of S2, which showed susceptibility towards Tetracyclin, all other Gram-negative isolates were resistant to all the antibiotics used against them.

However, mixed results were observed when the Gram-positive isolates were treated with the selected antibiotics. S6 was susceptible to the action of Streptomycin and Tetracyclin while being resistant to Ciprofloxacin, Oxacillin and Vancomycin. S7 showed susceptibility towards Ciprofloxacin and Tetracyclin while being resistant to Streptomycin, Oxacillin, and Vancomycin. It was observed that both the Gram-positive isolates were susceptible to Tetracyclin, resistant to Oxacillin while showing moderate or intermediate level resistance to Vancomycin. In the present study, all the Gram-negative isolates (S1-S5) with clinical history were resistant to the action of Amoxicillin / Clavulanic acid, Cefixime, Ciprofloxacin, Streptomycin, and Tetracyclin and hence, considered to be multi-drug resistant. This was found to be in agreement with the results of previous studies conducted by various researchers, which have indicated that Gram-negative bacteria were more prone to developing multi-drug resistance, compared to their Gram-positive counterparts, due to their multilayered cell envelope, which acts as a barrier to broad-spectrum antibiotics. The envelope seems to be designed to restrict the penetration of all molecules, allowing entry only to nutrients, which pass through porins and specialized transporters. Most antibiotics, being amphipathic, were blocked by the outer membrane of the cell envelope of Gram-negative bacteria 8.

Multiple Antibiotic Resistance Index (Mar-I): The Multiple Antibiotic Resistance (MAR) Index was evaluated for all the isolates under study. It has been tabulated in Table 4. It was observed that the Gram-negative isolates, S1-S5, exhibited a MARI of 1, while the Gram-positive isolates, S6 and S7, exhibited a MARI of 0.6. Multi-drug resistance was most prominent in the isolates S1, S2 and S4. The absence of a clear zone was conspicuous. The MAR Index also confirmed the remarkable MDR exhibited by the Gram-negative isolates.

In a 2016 study conducted by Nachammai et al. 1, E. coli was found to be the major uropathogen, constituting 69% of the isolates. Furthermore, 84% of these E.coli isolates were found to be multi-drug resistant. Recently, Shelenkov et al. 9 reported the presence of thirty-two MDR isolates of Klebsiella, three of which belonged to a very rare ST377 type 2. Thus, our findings were in agreement with previous reports and trends in multi-drug resistance patterns. 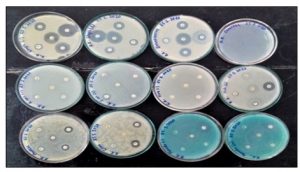 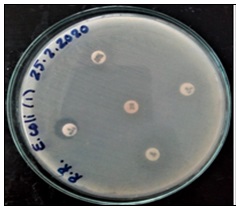 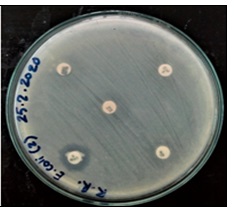 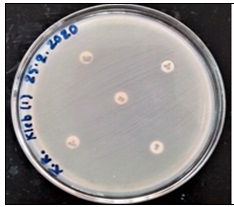 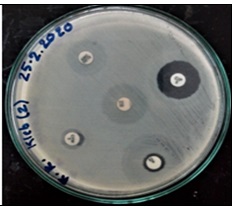 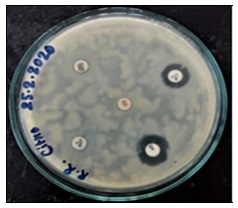 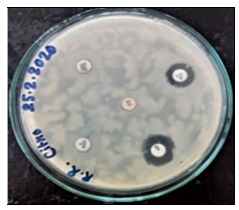 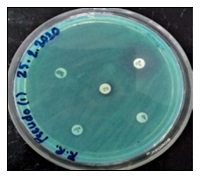 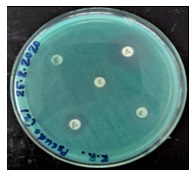 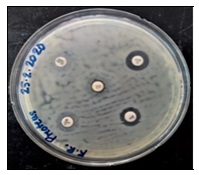 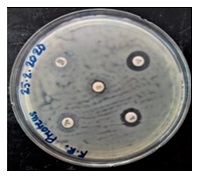 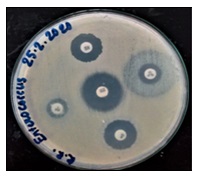 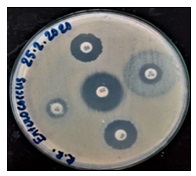 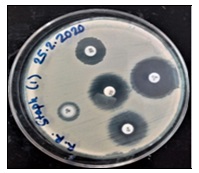 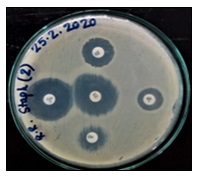 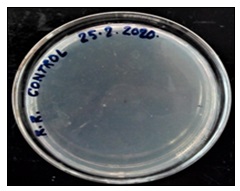 Biofilm Assay: Based on the observations recorded in Table 3, the isolates exhibiting maximum antibiotic resistance or multi-drug resistance were selected for further testing for biofilm production. Thus qualitative analysis for biofilm production by Congo-Red Agar (CRA) method was carried out for S1-S4. The results of the assay are displayed in Fig. 10-16. On the basis of the CRA method, the isolate showing maximum biofilm-forming efficacy, S4, was then further analyzed by the Tube Adherence Method. The result has been displayed in figures 16A and B. The biofilm-forming efficacy of S4 was then quantitatively analyzed using a combination of the simple tube method and spectrophotometry. An OD value of 0.38 at a wavelength of 540nm was obtained, where OD value of the control (only broth) was evaluated to be 0.05 at the same wavelength. The higher O.D. value exhibited by the isolate indicates a confirmatory result for biofilm production. In comparison to the Gram-negative isolates in this study, the Gram-positive isolates - S6 and S7 were relatively susceptible to the selected antibiotics, with the formation of clear zones around the antibiotic discs. S6 was susceptible to the action of Streptomycin and Tetracyclin while being resistant to Ciprofloxacin, Oxacillin and Vancomycin. S7 showed susceptibility towards Ciprofloxacin and Tetracyclin while being resistant to Streptomycin, Oxacillin and Vancomycin. It was observed that both the Gram-positive isolates were susceptible to Tetracyclin, resistant to Oxacillin while showing moderate or intermediate level resistance to Vancomycin. Thus, Tetracyclin may be considered, subject to further studies, effective against these Gram-positive isolates. 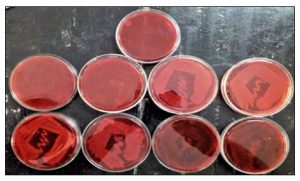 In a recent study undertaken by Sunayana Raya et al., biofilm-forming E.coli  were found to be more resistant to quinolones, cotrimoxazole, and third-generation cephalosporin, ceftriaxone.

The results of CRA assay (displayed in Fig. 10-16 indicated that among the collected clinical isolates, S4 was the most potent biofilm-producing MDR strain. While biofilm formation to a lesser extent was observed in S1 and S2, it was completely absent in S5. In a study, 70% of the uropathogenic E. coli isolates exhibited biofilm production by CRA method 1. 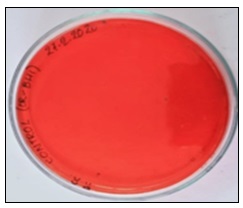 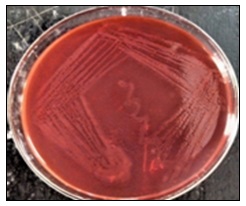 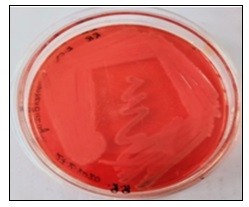 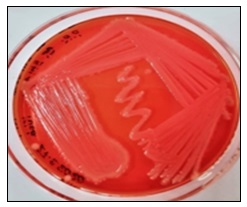 Detection of bacterial biofilm production using this method has been previously performed by Rakhshanda Baqai et al, for uropathogenic isolates 5. Pseudomonas was known to be one of the leading causes of nosocomial infections. A recent study quantitatively analyzed biofilm-forming efficacy of Imipenem-resistant P. aeruginosa isolates and found a high propensity of IRPA to form biofilm, which was strongly associated with higher drug resistance 11. Thus, the conclusion of the present study that Pseudomonas (Isolate S4) was the most potent biofilm-forming MDR isolate among the seven procured pathogenic isolates with clinical history was backed by previous studies. 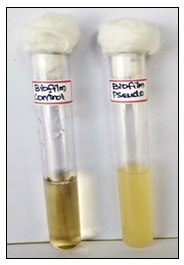 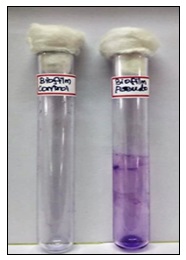 Quantitative Analysis Spectrophotometric Assay: Table 7 summarizes the results of the quantitative analysis of biofilm formation by the pathogenic isolate S4. The optical density of the test isolate (S4) was recorded at a wavelength of 540nm using a spectrophotometer. An O.D. value of 0.38 was recorded. The control gave an O.D. value of 0.05. The notably higher O.D. value exhibited by S4 indicates a positive result for biofilm formation.

CONCULUSION: Among the collected pathogenic isolates, S4 was found to be the most potent biofilm-forming MDR strain. Future work would entail combating the biofilm formation observed in S4 by treatment with green synthesized nanoparticles. Halting biofilm formation may in turn help in reducing the multi-drug resistance exhibited by the pathogen.