ABSTRACT: Background: Sida spinosa (Family: Malvaceae) is a well-known herb, has considerable medicinal significance in the tribal region of Chhattisgarh. Several ethnomedicinal survey reports have been revealed its potential to cure ailments such as skin diseases, diarrhea, gonorrhea, and asthma. Objective: The aim of the present study to screen phytochemical, flavonoid content, antioxidant and anthelmintic potential of Sida spinosa. Methods: Aqueous and ethanolic extracts of Sida spinosa leaves were prepared by the Soxhlet method. The extracts were phytochemically analyzed for alkaloid, flavonoid, tannin, carbohydrate, glycoside, and Phytosterols. Extracts were also tested for flavonoid content, antioxidant potential, and anthelmintic activity using Indian adult earthworm (Pheretima posthuma). Results: The phytochemical screening confirmed the presence of alkaloids, carbohydrates, glycosides, flavonoids, steroids, in the leaves of Sida spinosa. The Present study also reported that ethanolic extract has exhibited significant free radical scavenging capacity and anthelmintic activity as compared to aqueous extract. Conclusion: The present study has evidenced the prominent antioxidant and anthelmintic action of Sida spinosa, which may contribute to the development of an herbal alternative to synthetic drugs for helminthiasis.

Major problems associated with the treatment of helminthiasis are severe side effects and high cost of anthelmintic drugs 4, 5. For these problems, there is a great need for new chemical entities with the least side effect and low cost. Scientific data obtained from different countries revealed that herbs and their active principles could play an important role in the development of the new anthelmintic drug.

In the present study, Sida spinosa screened for anthelmintic and antioxidant activity. This herb is commonly found in Chhattisgarh, India and has therapeutic significance in the traditional medicinal system of India 6. Sida spinosa (Family: Malvaceae) known as prickly sida in English, has been used traditionally to treat various ailments such as asthma, diarrhea, gonorrhea and skin diseases 7, 8, 9.

It has been also experimentally evaluated for various activities such as antimicrobial, diuretic, antihyperglycemic and antihyperlipidemic 10, 11, 12. Reported activities of Sida spinosa revealed its medicinal importance for curing diseases, hence it has been selected for the study to discover the herbal alternative to conventional synthetic anthelmintic drugs.

Drug and Chemical: Mebendazole, ascorbic acid, and gallic acid were used as a standard drug 13, 14. All the reagents, solvents and chemicals used in the screening were an analytical grade 15.

Collection and Identification of Plant Material: The leaves of plant Sida spinosa were collected during the month October from some region of Raipur (Chhattisgarh, India). These leaves (both young and mature) were washed thoroughly with water and dried under the shade, then coarsely powdered and stored in airtight containers for further study. The plant was identified and authenticated by Dr. N. K. Dubey, Department of Botany, Banaras Hindu University, Varanasi (UP). Herbarium specimen of S. spinosa, bearing voucher number Malva. 2018/01 was deposited in the Department of Botany, Banaras Hindu University, Varanasi.

Preparation of Plant Extract: Dried Leaves were pulverized into coarse particles and extracted with solvents (water and ethanol) using Soxhlet apparatus 16. The extracts were then evaporated to dryness to obtain alcoholic (EESS) and aqueous extract (EASS) 17, 18.

Total Flavonoid Content: Leaf extract was assayed for total flavonoid content by the aluminum chloride colorimetric method. Different concentration (20, 40, 60, 80 and 100 µg/mL) of quercetin solutions has been prepared in methanol. One milliliter of extracts and standard quercetin solution was added to a 10 mL volumetric flask separately, and volume made up to 4 mL by adding distilled water. Then 0.3 mL of 5% NaNO2, 10% AlCl3, and 2 mL of 1 mol/L NaOH was added at the interval of 5 min. After that, volume was made up to 10 mL with distilled water. The absorbance of the mixed solution analyzed at 510 nm. The total flavonoid content was indicated as mg quercetin equivalents (QE) 22.

Antioxidant Screening: Free radical scavenging capacity has been estimated by the DPPH (1, 1-diphenyl-2- picrylhydrazyl) method developed by Viswanad et al. Different ethanolic concentrations (200, 400, 600 and 800 μg/ml) of Sida spinosa leaf extract were prepared. Thereafter 1.0 ml of a DPPH solution (0.1 mM concentration in ethanol) was added to 2.5 ml solution of the extract or standard and kept for 30 min in dark place at room temperature. Then absorbance was measured at 518 nm using spectrophotometer 23. Percentage free radical scavenging potential (% AA) of extracts and standard chemical were calculated by using the formula:

Where A0 = the absorbance of the control and A1 = absorbance in the presence of plant extracts and known standards.

Selection of Earthworm: Pheretima posthuma (earthworm) was selected for the study, Due to the anatomical and physiological similarity with the roundworm of human beings 24. Earthworms were collected from moist soil of Raipur, Chhattisgarh, India and washed with normal saline to remove the dirt and fecal material. Furthermore, the selection of earthworms has been done through the size range of 3-5 cm length for the study 25.

Experimental Method for Anthelmintic Screening: The anthelmintic screening was carried out as per model designed by researchers with some modifications. A total of 45 earthworms was collected and separated into groups (each group: 5 earthworms). Solutions of test extract (ethanolic and aqueous) and the standard drug were prepared in distilled water (20 ml) at a concentration of 25, 50 and 100 mg/mL. The earthworms were cleaned with normal saline solution and exposed to different concentrations of respective standard and test solutions in Petri dishes. The time of exposing worms in to test and standard solutions were recorded and observation made for mortality of earthworm.

In the present study, time taken for paralysis and mortality were recorded by shaking Petri dish. The mortality of earthworms was also confirmed by observing faded body color 13. The results are expressed as mean ± SEM of five worms in each group. Comparisons have been made between standard against test treated group. P<0.05 was considered significant. 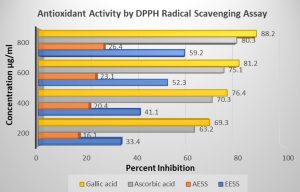 Anthelmintic Screening: The observation showed in Table 2 demonstrated that ethanolic extract of Sida spinosa (EESS) gave shorter paralysis and death time at 100 mg/mL as compared to aqueous extract of Sida spinosa (AESS). Mean ± SEM values were calculated for both extract and standard. EESS showed a prominent anthelmintic effect in a dose-dependent manner and taken the shortest time for paralysis (25.38 ± 0.24) and death (32.13 ± 0.21) at 100 mg/mL concentration. In the case of AESS, the dose of 100 mg/mL exhibited the shortest time of paralysis (48.39 ± 0.27) and death (64.05 ± 0.08). It is observed that both the investigational extracts showed significant anthelmintic activity (P<0.05) for the time taken for paralysis and death when compared to standard drug mebendazole.

DISCUSSION: The observation of preliminary phytochemical screening and total flavonoid content of leaf extract has given clear implications about the significant content of flavonoid and the presence of other constituents such as alkaloid, saponin, tannin, and steroids. These active principles might be the reason behind the therapeutic significance of Sida spinosa. In the anthelmintic screening, ethanolic extract of leaf showed prominent anthelmintic action compared to aqueous extract. The outcome of studies indicated that flavonoid content of Sida spinosa could be related to its anthelmintic activity and this herb can be a good herbal resource for the treatment of helminthiasis. In last few years, numerous studies implicated that reactive oxygen species are involved in the pathogenesis of diseases by imposing cellular damage, and the present study has also confirmed the free radical scavenging effect of Sida spinosa, which may cause an ameliorative effect on oxidative stress 26. During the last two decades, thousands of herbs have been screened for the anthelmintic potential to discover the herbal alternative to synthetic drugs. These herbs are new hope for the development of effective panacea for helminthiasis with the benefit of antioxidant action. Further in-vivo screening is required to confirm anthelmintic activity and investigate the exact mode of action of active principles of Sida spinosa for anthelmintic activity.

CONCLUSION: The present study revealed significant anthelmintic action with the advantage of free radical scavenging capacity and good content of flavonoids of Sida spinosa. This approach might be supported in the development of panacea for Neglected tropical diseases such as helminthiasis.

CONFLICTS OF INTEREST: I declare that I have no conflict of interest.