SCREENING, ISOLATION AND IDENTIFICATION OF NITRILASE PRODUCING BACTERIA FROM SOIL

SCREENING, ISOLATION AND IDENTIFICATION OF NITRILASE PRODUCING BACTERIA FROM SOIL

ABSTRACT: Enzymes are identified as key catalysts in various processes occurring within the living cells. The role of various enzymes is constantly investigated to find their novel applications. Nitrilase is one such enzyme which carries out the hydrolysis of carbon-nitrogen bonds except for amides. This catalytic property of nitrilase is exploited to generate corresponding chiral carboxylic acids. These chiral molecules can be employed in various drug synthesis schemes. Nitrilase have been reported from various microorganisms with variable catalytic properties. With an objective to explore microorganisms which produce nitrilases and able to catalyze aromatic nitriles, screening of microorganisms from soil was carried out. Out of five soil sampling sites, screening from the soil sample taken from benzonitrile manufacturing industry (Anami Organics Ltd. Valsad, Gujarat-India) resulted in isolation of microorganism which was able to use benzonitrile as substrate and was positive for nitrilase enzyme assay which was done by modified indophenol method.   The microorganism was later identified to be Bacillus thuringiensis using 16s rRNA and biochemical analysis. Nitrilase is present as an intracellular protein in this species.

INTRODUCTION: Hydrolysis of nitriles to corresponding acids and ammonia is carried out by nitrilase. These enzymes differ from nitrile hydratases as they avoid amide formation 1, 2. Studies on nitrilases for its occurrence,  characteristics, substrate specificity, mechanism of action and gene cloning from various sources like bacteria, fungi and plants have been reported 3–5. Nitrile bioconversion by nitrilase favor economic and environmental acceptance and thus have found their applicability in chemical manufacturing 6–12

Depending on the nitrile structure the nitrilases can be categorized as aromatic nitrilase, aliphatic nitrilase and arylacetonitrilase 13. Nitrilases have been commercially utilized for the industrial production of acrylamide 14 and  nicotinic acid 15. One of the key products of nitrilase bioconversion is (R)-(-) Mandelic acid, which acts as a key intermediate for the production of semi-synthetic cephalosporins and penicillins 16, 17.

It has been also reported for utility as a chiral resolving agent 18 and chiral synthon for the synthesis of anti-tumor agents 19, anti-obesity agents 20 etc. Studies have also reported production methods for  chiral alpha hydroxy carboxylic acids using enzyme other than nitrilase like lipase 21, esterase 22, glyoxalase 23, mandelate dehydrogenase 24 and mandelateracemase 25, these methods were not used for industrial scale of production due the parameters which include, expensive substrate, co-factor requirement,  process stability etc.26

This paper reports the screening of microorganisms from soil sample(s) to isolate strains with nitrilase activity for aromatic nitrile(s).

Soil for screening the microorganisms was collected from five different sites one of which was from outside Anami Organics Limited, District. Valsad- Gujarat, India. This site is a benzonitrile manufacturing unit and hence should provide positive strain(s) for nitrilase production. Samples were collected in sterile zipper polyethylene bags.

10g of soil samples were dried for constant weight at 60°C for 72hrs in oven (Dolphin) and then the moisture content was calculated. Percent moisture was calculated as follows:

Soil samples were dried at 60°C for 72hrs, mashed in pestle and mortar and filtered through ASTM sieve number 18 and 20 (Filterwel Test Sieves). The sieved soil was dissolved in demineralized water (40%w/v) mixed thoroughly and allowed to stand for 30minutes and then pH was measured by digital pH meter (Control Dynamics) 39.

After plating the dilutions, the plates were incubated (Meta Lab) at 25°C and 37°C to screen for fungal and bacterial strains respectively. The colonies which appeared post incubation were propagated and analyzed for the presence of nitrilase by modified Berthelot assay 46. Nutrient broth (at 37°C/ 200rpm) and Czapek Dox broth (at 25°C/ 200rpm) along with 50mM benzonitrile were used for propagation of bacterial and fungal strains respectively. The incubation was carried for 72hrs in Orbital Shaker (Thermo-scientific).

Modified Berthelot assay was used for the determination of enzyme assay by tapping the ammonia generated. Benzonitrile was used as the substrate 48–50. Alicagenesfaecalis has been reported for production of nitrilase and hence Alicagenesfaecalis NCIM 2949 was kept as positive reference for nitrilase assay 51.

To 2ml of supernatant, 0.08ml of phenol solution was added and vortexed gently. Subsequent to this0.08ml sodium nitroprusside and 0.2ml of oxidizing solution were added, mixed and incubated at room temperature for 1hr followed by measurement of absorbance at 630nm.39

The positive strain for nitrilase was given an in-house identification number as VSS6001. Microorganism identification was outsourced to Yaazh Xenomics for Biochemical tests and 16s rRNA. The primers used for the analysis were; forward primer-AGAGTTTGATCMTGGCTCAG and reverse primer TACGGYTACCTTGTTACGA CT T.

Analysis of soil is a critical parameter in microbial screening exercise. The soil sample was analyzed for various parameters as shown in Table 3.

Screening of the soil sample for presence nitrilase positive strains was first done on the minimal media. The colonies from the minimal media were then grown and analyzed for nitrilase activity. As Alicagenesfaecalis NCIM 2949 was taken as the positive culture for nitrilase assay, there was a need to optimize the enzyme assay conditions which was done using design-expert platform. In the first factorial design as shown in  Table 1 run 5 was the only trial which provided a blue end point for enzyme assay, but it also presented a scope for further optimization of assay conditions and hence another factorial design as shown in Table 2 was done. Run 1 of this factorial design gave maximum absorbance of 0.2AU at 630nm for enzyme assay and hence conditions of this trial were finalized for all the subsequent enzyme assays.

The nitrilase assay for VSS6001 gave an absorbance value equal to the positive culture. Biochemical tests reported the culture as gram positive, results for other parameters are as shown in Error! Reference source not found. On the basis of biochemical tests the strain VSS6001was identified as one of the two probable culture; Bacillus thuringiensis and Bacillus cereus. Fig. 1 shows the assembled sequence for VSS6001 after 16s rRNA. The phylogenic tree for VSS6001 as shown in Fig. 2 identifies the strain VSS6001 as Bacillus thuringiensis 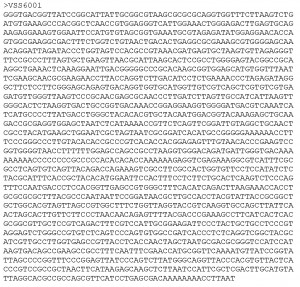 CONCLUSION: Soil is one the ecological niche which harbors a large number of microorganisms. The research work reported through this paper was planned to screen microorganisms harboring nitrilases that can catalyze aromatic nitriles.  These aromatic nitrilase may then be employed in green synthesis of corresponding acids. Five soil sampling sites were selected for screening of the nitrilase producer microorganisms, out of which four sites provided no positive culture (Manuscript communicated as negative results, under review).

The presence of colonies on minimal media identifies them as a potential nitrilase producer strain(s). These strain(s) were further propagated and evaluated for nitrilase enzyme assay to select the most potent colony. It was the soil sample from outside Anami Organics Limited, District. Valsad- Gujarat, India which gave one potent positive strain, labeled as VSS6001 later identified as Bacillus thuringiensis. This strain has been reported for the production of bio pesticide 52–55.

ACKNOWLEDGMENTS: We gratefully acknowledge SVKM’s NMIMS (Deemed to be University), Mumbai for the doctoral fellowship to Mr. Vikas Verma; Dr. R. S. Gaud and our School, SPPSPTM for providing us all the facilities, support and motivation and Mr. Viplav Kumar Singh, for all the help.