SCREENING OF 4-([1,3,4]OXADIAZINO[6,5-b] INDOLE-3-YL)ANILINE DERIVATIVES FOR ANTI-BACTERIAL ACTIVITY BY IN-SILICO AND IN-VITRO METHODS

SCREENING OF 4-([1,3,4]OXADIAZINO[6,5-b] INDOLE-3-YL)ANILINE DERIVATIVES FOR ANTI-BACTERIAL ACTIVITY BY IN-SILICO AND IN-VITRO METHODS

ABSTRACT: Schiff bases of isatin are investigated overtime for their pharmaceutical properties and have been found to have various activities such as anti-viral, anti-bacterial, anti-inflammatory, analgesic, anti-HIV, anti-depressant, anti-convulsant, fungicidal, etc. Isatins are treated with hydrazine derivatives and cyclized by sulfuric acid. These compounds are alkylated by di alkyl aminoalkyl halides in specific catalysed conditions. In this study we focus on 4-([1,3,4]oxadiazino[6,5-b] indole-3-yl)aniline derivatives for anti-bacterial activity. Based on literature, glucoseamine-6-phosphate synthase (PDB ID: 2VF5) and dihydropteroate synthase (PDB ID: 1AJ0) enzymes are chosen as potential targets as showed activity for antibacterial and antifungal agents. The in-silico studies were carried out using Swiss ADME and Molinspiration in-silico tools and scoring of molecular docking i.e., virtual screening was done by using AutoDock v.4.0. The in-vitro studies were carried out in the lab using cup-plate method and the zone of inhibition (in mm) was measured. The in-silico results were compared with that of in-vitro and a comparison was drawn. The activity of the compounds was found to have correlated.

INTRODUCTION: In the past two decades, antibiotic resistance has become an increasingly severe health problem. Bacterial infections caused by resistant strains are causing chaos in numerous hospitals around the world, especially in patients compromised by various factors like age, illness, and treated with immune-suppressant drugs. In this context, it is essential to increase the understanding of resistance mechanisms in order to develop drugs with potential activity against these pathogens. Hence, the need for the synthesis of newer classes of antibiotics with a novel mechanism of action is seen.

Therefore, the inhibition of microbial growth under standard conditions may be utilized for demonstrating the therapeutic efficacy of antibiotics. Any change in antibiotic molecule which may not be detected by chemical methods but will be revealed by the anti-microbial activity. Therefore, the microbiological assays are very useful for resolving doubts regarding the possible loss of potency of antibiotics 1-8.

Isatin or Tribulin is an indole derivative, the compound was first obtained by Erdmann 9 and Laurent 10 in 1841 as a product from the oxidation of indigo dye by nitric acid and chromic acids. The compound is found in many plants, such as Isatistinctoria, Calanthe discolor and Couroupita guianensis 11. The computational techniques in drug discovery have drastically reduced the time and cost involved in drug design and development it also reduced the failure rates to a large extent at critical stages of clinical trials.

The in-silico techniques have enhanced the understanding of molecular properties and the specific behavior or nature of drug-receptor interaction at molecular level. Molecular docking has become an important component of the drug discovery toolbox, and its relative low-cost implications and ease of use have stimulated ever-increasing popularity in the industry and amongst researchers. Glucosamine-6-phosphate synthase (GlcN-6-P) is a precursor of uridine diphospho-N-acetylglucosamine from which other amino sugar-containing molecules are derived. Because N-acetylglucosamine is an important constituent of the peptidoglycan layer of bacterial cell walls and fungal cell wall chitin, the enzyme is a potential target for antibacterial and antifungal agents 12.

The DHFR enzyme is a central player in the folate pathway that links divergent folate synthesis or acquisition mechanisms to the production of tetrahydrofolate (THF). An anti-folate target is dihydropteroate synthase (DHPS) is unique to prokaryotes. The drugs target the p-aminobenzoic acid (pABA) binding site of DHPS and interfere with folate biosynthesis and ultimately prevent bacterial replication 13, 14.

MATERIALS AND METHODS: The synthesised compounds were procured from the lab of IPT, SPMVV, Tirupati.

SwissADME- where we can predict:

Physicochemical Parameters: The parameters of the molecules which affect the nature of the compound. Ex: no: of rotatable bonds (n rot bonds), H-bond donors (H donor/acceptor) or acceptors, molecular weight, etc.

Lipophilicity: From the various values of LogP, MlogP value is considered.

Leadlikeness: A lead compound in drug discovery is a chemical compound that has pharmacological or biological activity likely to be therapeutically useful, but may nevertheless have a suboptimal structure that requires modification to fit better to the target.

Generate a boiled egg representation to show the absorption of the compound in GIT or the ability to penetrate BBB.

Molinspiration an online tool where the ADME properties of synthesized compounds can be determined. (http://www.molinspiration.com/cgi-bin/properties). It’s used for the generation of the bioactivity scores of the compounds.

Bioactivity Score: Biological targets are the most common proteins such as enzymes, ion channels, and receptors. The biological target is also referred to as a drug target. The bioactivity scores of the synthesized complexes were calculated for different parameters such as binding to G protein-coupled receptor (GPCR) ligand and nuclear receptor ligand, ion channel modulation, kinase inhibition, protease inhibition, and enzyme activity inhibition. The software predicts moderate biological activity for the synthesized complexes. It is known that for metal complexes, if the bioactivity score is more than 0.0, then the complex is active; if it is between −5.0 and 0.0, then the complex is moderately active, and if the bioactivity score is less than −5.0, then it is inactive.

Molecular Docking: The structures of ligand molecules were drawn using Chemdraw version 12.0. and were converted to a 3D conformation using ChemDraw Biochem 3D. Later their energy was minimized by using MMFF94 and MM2 energy fields. The structure of standard (streptomycin) was downloaded from ZINC database. Molecular docking studies were performed using AutoDock v.4.0. The 3D X-ray crystal structure of enzyme DHPS (Dihydropteroate synthase) (PDB ID: 1AJ0) and glucoseamine- 6- phosphatesynthase (glcN-6-P) (PDB ID: 2VF5) were imported from RCBS:PDB. The receptor grid with its ligand data was also obtained from the Protein Data Bank (PDB). The enzyme was prepared for docking studies.

It involves i) Removal of a ligand molecule and other heteroatoms from the enzyme active site. ii) Addition of polar hydrogens and charges to the structure with their standard geometry iii) The obtained model was used in predicting the ligand enzyme interaction at the active site. The prepared ligands and target molecules were docked, and the results are given in the table as best pose binding energy scores. 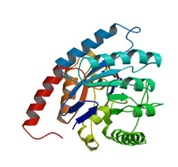 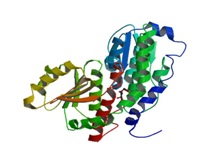 Biological Evaluation of Anti-bacterial Activity: The anti-bacterial activity was determined by the cup plate method (agar diffusion method) by measuring zone of inhibition at a concentration of 100 µg/ml against gram-positive (Bacillus subtilis, S. aureus) and gram-negative bacteria (Escherichia coli, Pseudomonas vulgare). Streptomycin was used as the standard drug at the concentration of 100 µg/ml.

In-vitro Antibacterial Activity- Cup Plate Method: 20, 21 Antimicrobial activity was performed by cup plate method by measuring zone of inhibition. Nutrient agar media for bacterial strain and sodium carboxymethyl cellulose (Sod.CMC) was used as solvent control. The stock culture was maintained. Bacterial inoculum was prepared by transferring a loop full of stock culture to the nutrient broth in conical flask. The flask was incubated at 34-37 °C for 24 h before experimentation. A volume of 25 ml of sterile hot agar medium was poured in each plate and allowed to harden on a level surface. The agar plates were inoculated with 24-h test inoculums by spreading uniformly with sterile cotton swabs. Bores were made on the medium using sterile borer. A volume of 0.1 ml of test solution was added to respective bores. Streptomycin at a concentration 100 µg/ml was taken as standard drug. A control of Sod. CMC was taken. The petri plates were kept in the refrigerator at 4 °C for 15 min for diffusion to take place. Afterward they were incubated at 37 °C for 24 h and zones of inhibition were observed and measured using a scale. The various antimicrobial activity results of synthesized compounds were shown in the Table.

RESULTS AND DISCUSSION: The compounds procured from the lab were tested using in-silico and in-vitro methods.

In-silico Studies: The in-silico analysis of the compounds was done using SwissADME and Molinspiration.

SwissADME: According to SwissADME studies, the compounds showed good pharmacokinetic properties. They are BBB permeant (except 2d; R=NO2) and were found to be P-glycoprotein substrates according to boiled egg representation as well i.e., present in yolk region except for 2d (R=NO2). The compounds obeyed Lipinski's rule with no violations and showed lead likeness.

Boiled Egg Representation: It shows us that this series of compounds have good BBB permeability and indicates P-gp substrate nature (except 2d; R= NO2). 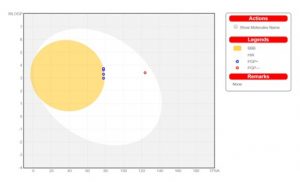 The dock scores of most of the compounds were as good as the standard streptomycin. 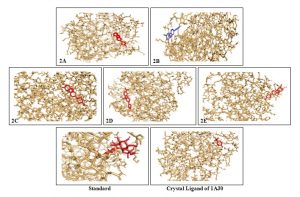 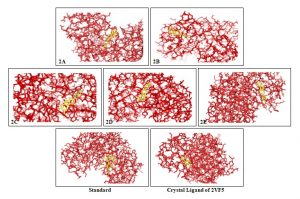 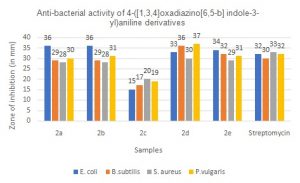 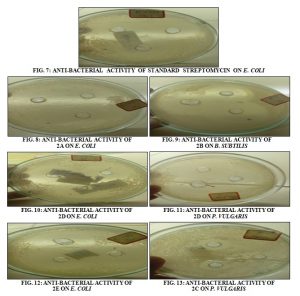 CONCLUSION: The compounds series-2(4-([1,3,4]oxadiazino[6,5-b] indole-3-yl)aniline derivatives), according to SwissADME study, the compounds showed good pharmacokinetic properties. The boiled-egg feature showed that they are BBB permeant i.e., present in yolk region and were found to be P-glycoprotein substrates (except 2d; R=NO2). The compounds obeyed Lipinski's rule with no violations and showed lead likeness. According to the Molinspiration study, the compounds were found to be active as kinase inhibitors, ion channel inhibitors, and enzyme inhibitors, moderately active as GPCR ligand, protease inhibitor, and nuclear receptor ligands. The molecular docking study in two targets showed good to moderated binding scores on AutoDock v.4.0. They also showed good to moderate activity in in-vitro testing of these compounds against gram-positive (Bacillus subtilis, Staphylococcus aureus) and gram-negative bacteria (Escherichia coli, Pseudomonas vulgare) for anti-bacterial activity using cup plate method.

From the above observations, we can conclude by saying that these compounds showed lead likeness and showed good anti-bacterial activity in-silico as well as in-vitro studies. Therefore, in-silico and in-vivo studies have correlated. These moieties can be taken further in research for newer antibiotics.

ACKNOWLEDGEMENT: This work was supported by the Institute of Pharmaceutical Technology, Sri Padmavathi Mahila Visvavidyalayam, Tirupati.

CONFLICT OF INTEREST: Conflict of interest declared none by the authors.