INTRODUCTION: Madhuca longifolia belongs to the family Sapotaceae is known for its medicinal value.  Several parts of the tree found uses in the traditional and folklore medicines in India.  The seeds showed a good commercial potential as a source of vegetable fat.  Madhuca oil is used for the treatment of skin diseases, constipation, rheumatism, head ache and as a laxative.  The seeds are ground with water and used as a collyrium in snake-bitten fainting. The residual cake ‘mowrah meal’, obtained after the extraction of the oil from seeds is used as fish poison1. Since M. longifolia seeds are highly medicinal, it is selected to study for their antioxidant and antimicrobial properties.

Antioxidant property of the seed was determined by the methods of hydrogen peroxide scavenging activity2 and reducing power assay3.

Seeds were extracted with methanol and water and the extracts were dried in an oven at 45oC until to get the residue.   The residue of the dried extracts were used for further studies.  The extracts (4ml) were prepared using distilled water at various concentrations (100µg - 500 µg). Then extracts were mixed with 0.6 ml of 4mM H2O2 solution prepared in phosphate buffer (0.1 M with pH 7.4) and incubated for 10 min. The absorbance was measured at 230 nm against blank solution containing the plant extract without H2O2.  Ascorbic acid was used as standard reference.

Methanol and water extracts of M. longifolia seed were used to determine the reducing power.1 ml of each extract was taken in different concentration (20, 40, 60, 80 and 100µg/ml) mixed with 2.5ml of phosphate buffer (0.2M, pH 6.6) and 2.5 gm of potassium ferricyanide. The mixtures were incubated at 50oC for 20 minutes. 2.0 ml of TCA was added to the mixture and centrifuged at 3000 rpm for 10 minutes.  After that,   2.5 ml of supernatant was taken and mixed with 2.5 ml of distilled water and 5ml of ferric chloride solution ie., in the ratio of 1:1:2 and absorbance were made  at 700nm in UV- visible spectrophotometer. Ascorbic acid used as a standard reference and phosphate buffer used as a blank solution. Increase in the absorbance value signifies the increase in reducing power.

Antimicrobial studies were carried out with agar well diffusion method. Wells were bored in to the agar using a sterile 6 mm diameter cork borer. Different concentrations of extracts (100-500 μg/µl) were prepared and added into the well. Control was also maintained in parallel. The allopathic antifungal drugs Ketoconozole (100μg) and Itraconozole (100μg) were used as positive control for fungi and Ampicillin for bacteria.  Methanol used as negative control for both bacteria and fungi.

Petriplates with fungal cultures were incubated at 25oC and bacterial cultures at 37oC in an incubator.  The zone of inhibition was observed after 24 hrs for bacteria and 72 hrs for fungi and the results are exhibited in the average of triplicates.

Antioxidant may be defined as radical scavengers which protect the human body against free radical that cause pathological condition. Very high concentrations of O2 supply is toxic and can damage tissues and body’s own antioxidant system resulting in the production of free radicals. An imbalance between the free radicals production and natural antioxidants could cause damage to proteins, DNA and genetic material within the cells. The present day concepts of toxicity are due to the involvement of oxygen free radicals or reactive oxygen species3, 4. Hence, it is essential to test the antioxidant potential of the plant material.

The antioxidant property of seed extracts were determined by the methods of hydrogen peroxide scavenging activity and reducing power assay.  Methanol and water were used to extract the seed powder of M. longifolia.  Among the two extracts tested, methanol extract exhibited higher antioxidant activity (0.249± 0.12) than water extract (0.170± 0.06). However, control Ascorbic acid (0.990± 0.49) showed higher activity than seed extracts tested (Fig 1). Absorbance value increased as the concentration of the extracts increased. 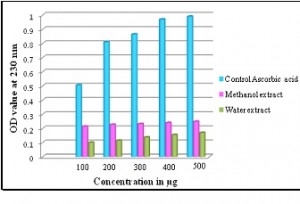 Hydrogen peroxide is a highly important reactive oxygen species because of its ability to penetrate biological membranes. This H2O2 may be toxic if converted to hydroxyl radical (OH) in the cell. The antioxidant substance in the plant extracts neutralizes H2O2 into water by donating electron and thus making it harmless5.

The seed extracts of M. longifolia when subjected to the reducing power assay showed the following result. Methanol extract exhibited higher reducing activity (1.737) than the water extract (1.429). Highest absorbance value was found in standard ascorbic acid (1.832) than the plant material extracts (Fig 2). It was found that the antioxidant activity was directly proportional to the concentration of the extracts. Extracts with higher concentration exhibited higher antioxidant activity.

The reducing ability of a compound depends on the presence of reductants (antioxidants) present in the extracts. Presence of antioxidants in M.longifolia   seedscause the reduction of the Fe3+ ferricyanide complex to the ferrous form (Fe 2+) confirming its antioxidant potency6. 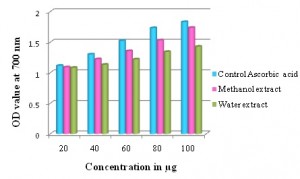 Antimicrobial efficacy of methanol and water extracts of M.longifolia seeds were studied against various fungal and bacterial pathogens isolated from infected animals. The results revealed that, methanol extract showed good inhibitory effect against all the fungal pathogens tested.  Among that, Trichophyton mentagrophytes and Penicillium sp. were found to be more susceptible to methanol extract followed by Curvularia geniculata and Rhizopus rhizopodoformi (Table 1).

Water extract did not show any inhibitory effect against all tested organism except Candida albicans. As the concentration of the seed extract increased, the antifungal activity also increased. Standard antifungal drugs ketoconozole and itraconozole does not show any significant activity.

Antimicrobial activity of the seed is mainly due to the presence of secondary metabolites in the plant.  Earlier studies confirmed the presence of tannins, triterpenoids, steroids, saponins, flavonoids and glycosides in the seed of M. longifolia7.  Tannins have been found to form irreversible complexes with protein resulting in the inhibition of cell protein synthesis thus, exhibiting inhibitory effect against the infectious microorganisms8.

Steroids and saponins are known for their cardiotonic activities, insecticidal and antimicrobial properties9. Flavonoids are known to be synthesized in response to microbial infection which is found to be effective in inhibiting the growth of wide range of microorganisms10. Glycosides serve as defense mechanism against predation by many microbes11. All the phytochemicals present in the seed contributed the antimicrobial activity.

CONCLUSIONS: Present investigation confirmed the antioxidant and antimicrobial   properties of

M. longifolia seeds.  This is mainly due to the presence of vital secondary metabolites in the seed. Therefore the seed and their derivatives can be utilized for the preparation of drug to cure skin diseases.

ACKNOWLEDGEMENTS: One of the authors, Ms.Umadevi, U. thanks UGC for providing Junior Research Fellowship to carry over the Research work.