INTRODUCTION: Marine seaweeds produce an assorted collection of compounds that helps as a chemical defense system that facilitating their survival in extremely viable environments. Some of them used as fertilizers, medicines, and dietary chemicals 1. Chemicals such as carbohydrates and proteins are vital for maintaining life processes, while others like alkaloids, phenolic and steroids are secondary metabolites, which have toxicological, pharmacological, and ecological significance 2.

They considered as a source of bioactive compounds, since they produce a great variety of secondary metabolites with broad spectrum of biological activities, which possess pharma-ceuticals, industrial, agricultural and bio-techno-logical applications 3, 4. Compounds with anti-oxidant, antiviral, antifungal, and antimicrobial activities have been isolated from various groups of brown, red, and green algae 5, 6, 7.

Epidemiological evidence suggests regular seaweed consumption may protect against a range of diseases of novelty. Extracts of marine algae are likely to exhibit potent anti-bacterial activity, which used as a potent anti-microbial agent 8. More precisely, Southeast coast of India has an enormous amount of Chlorophyceae, Rhodophyceae, and Phaeophyceae seaweeds, which has anti-bacterial property 9.

Understanding the commercial value and therapeutic usage of these compound would create a solution to various clinical and public health problems caused due to antibiotic resistance and multi-resistant bacteria, which are difficult and sometimes impossible to treat 10. Hence, the current study aimed to investigate the antimicrobial activities of brown marine macroalgae (Turbinaria conoides, Padina gymnospora, and Sargassum plagiophyllum) collected from coastal waters of Gulf of Mannar Coast of Indian Subcontinent.

Collection of Seaweeds: Seaweeds were collected by handpicking from Gulf of Mannar, South Indian coastal region of India which lies between 8° 47’ to 9° 15’ N latitude and 78° 12’ to 79° 14’ E longitude. The samples collected in the month of November 2017 to February 2018. They were washed with marine water thoroughly to remove epiphytes and debris and then with running water and rinsed with sterile water and was stored at room temperature until analysis. The collected seaweeds were identified in the Center for Marine Fisheries Research Institute, Mandapam, Tamil Nadu, and India. The identified species of seaweeds such as Turbinaria conoides, Padina gymnospora and Sargassum plagiophyllum screened for the evaluation of their antibacterial efficacy.

Preparation of Crude Seaweed Extract: The seaweeds were shade dried for 5-15 days, and the dried pieces were ground into powder by using electrical grinder. 100 g of powdered seaweeds were mixed with 300 ml of different solvents, i.e., hexane (polarity index -0.1), ethyl acetate (polarity index-4.4), methanol (polarity index -10.2) and placed on rotary shaker at 100 rpm.  The extracts then filtered using 11-µm pore size of Whatman no.1 filter paper. Then the extracts were concentrated using a rotary evaporator (Buchi-R420) at 40 °C under reduced pressure. Finally, the crude extracts weighed and stored at -20 °C until use. The extraction of aqueous fraction was by lyophilization from the dried powder.

Determination of Antimicrobial Activity: The antimicrobial activity was determined by agar well diffusion method, according to National Committee for Clinical Laboratory Standards (NCCLS). Briefly, Mueller-Hinton agar (Hi-Media, India) plates swabbed with inoculums containing 108 CFU /ml of each bacterial culture and inoculated with standardized inoculums of the test microorganism with sterile effusion. Wells of 10 mm in diameter punched into the seeded MH agar plates.

Different concentrations (150 mg/ml and 200 mg/ml) of crude extracts were prepared using 2% dimethyl sulphoxide (DMSO) for the analysis of the antibacterial activity against the bacterial pathogens 100 µl of each extract, which has a final concentration of 3 mg / 20 µl and 4 mg / 20 µl was loaded along with DMSO into the well for standard diffusion. Streptomycin disc (Hi-Media, India) acts as a positive control, and the plates were incubated in triplicates at 37 °C for 24 h. The diameter of the inhibition zone (mm) measured, and the activity index was calculated. DMSO acts as a negative control for all the experiments.

Determination of Minimum Inhibitory Con-centration: MIC performed was by a serial dilution technique using 96-well microliter plates 11. The extracts of the test samples were diluted with DMSO in different concentrations viz., 20, 50, 100, 150, 200 mg/ml. and were allow diffusing thoroughly. Absorbance reading at 600 nm was determined after incubation for 18 h at 37 °C using a UV-1800 spectrophotometer.

RESULTS: The antimicrobial activities of the three species of seaweeds were calculated according to their zone of inhibition against various pathogens. 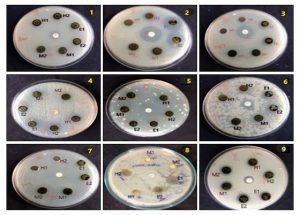 Ethyl acetate extract of Padina gymnospora showed activity against Staphylococcus epi-dermidis, Proteus vulgaris, Bacillus subtilis, Shigella flexneri, Enterobactera erogenes, Salmo-nella typhimurium and Klebsiella pneumonia, whereas it fails to show the activity in all the other solvents tested of these results, the higher zone of inhibition was against Staphylococcus epidermidis, Proteus vulgaris, and Bacillus subtilis when compared to control, whereas Yersinia pestis does not show any zone of inhibition against any of the solvents tested in Fig. 2 and Table 2. 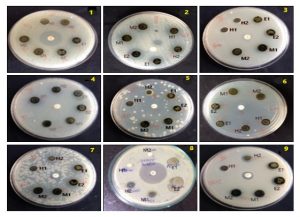 Pathogenic activity of crude extract of Turbinaria conoides showed very significant against Staphylococcuse pidermidis for hexane, ethyl acetate and methanol extracts, of which 200 mg/ml of hexane, ethyl acetate and methanol extract showed very high zone of inhibition of 17 ± 0.24, 15 ± 0.27 and 13 ± 0.28 respectively when compared to control. A maximum zone of inhibition of about 17 ± 0.24 mm recorded for hexane solvent extract when compared to the control (12 mm). 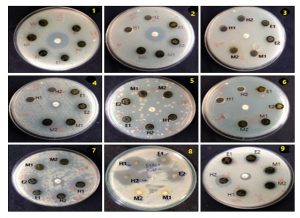 The various phytochemical components were compared with the spectra of known compounds stored in the NIST library by the peak area, molecular weight, molecular formula, chemical structure, and retention time (RT) in Table 4. 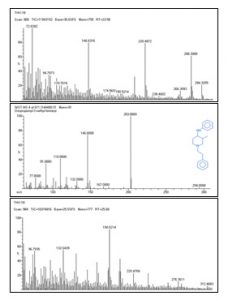 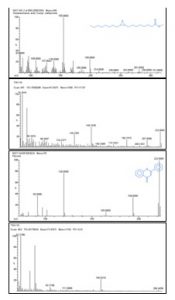 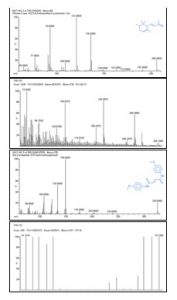 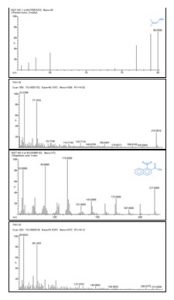 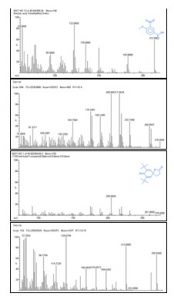 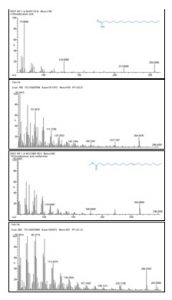 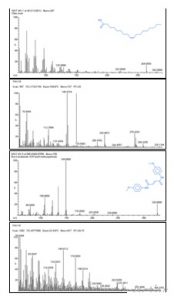 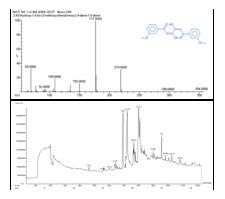 DISCUSSION: A higher percentage of the population across the world prefers to use natural products for their various alignments as they produce fewer side effects on humans. One among them is the marine algae, which is a reservoir of many secondary metabolites, which serves various purposes. Different groups of marine algae known to contain active compounds that used as remedies for many diseases 12, 13. Previous investigations on the production of antibiotic substances by aquatic organisms form a rich and varied source of antibacterial and antifungal agents. Over 15000 novel compounds have been chemically determined. Focusing on bio-products, recent trends in drug research from natural sources suggest that algae are a promising group to furnish novel biochemically active substances 14. The present study focuses on the screening of various extracts of marine seaweeds for its antibacterial activity against gram-positive and gram-negative pathogens. The results revealed that all the extracts are potent antimicrobials against the micro-organisms tested.

From the previous studies, a variety of solvents used, based on its polarity, for antimicrobial activity screening, but still uncertain what kind of solvent is most effective for the extraction of seaweeds. Earlier studies showed the extraction of Turbinaria conoides with n-hexane, cyclohexane, methanol and ethanol: water (1:1) depicted with their antibacterial activities by disc diffusion method. In the present study, with increasing polarity, three organic solvents like hexane < ethyl acetate < methanol along with the water used for the extraction of crude extracts from three different species of marine algae. In the case of Turbinaria conoide highest antibacterial activity was exhibited in ethanol extract, which was comparable to the standard, Streptomycin against Bacillus subtilis, Enterococcus faecalis and Pseudomonas aeruginosa 15. There was no anti-bacterial, activity shown in Methanol extract of Sargassum vulgare against Escherichia coli and Staphylococcus aureus 16.

The methanol extract of marine brown algae Padina gymnospora and Sargassum wightii showed no activity against the bacterial species of Bacillus subtilis, Staphylococcus aureus, Klebsiella pneumonia, Pseudomonas aeruginosa, and Salmonella typhus 17. In the present study, there is no zone of inhibition from methanol extract of Sargassum plagiophylum and Padina gymnospora against the human pathogens studied. The organic solvent, which shows an antibacterial activity against the pathogens, in one species of algae, is not effective in other algae. Earlier reports, against the effectiveness of extraction methods, explain that methanol extraction yields higher antimicrobial activity than hexane and ethyl acetate 18, 19, whereas another study gives better result in chloroform than methanol and benzene 20. In another study, extract of acetone exhibited a strong antimicrobial activity against bacteria when compared to other extracts 21.

Higher antibacterial activity in brown algae extracts may be due to the presence of secondary meta-bolites like phenolic compounds of Turbinaria conoides, which may affect the growth as an inhibitory effect and the metabolism of bacteria, based on their chemical constitutions and concentrations 22. The present study is in concur with the study of 23 reports in which cyclohexane extract was possessed a broad array of anti-bacterial property over the other extracts. It was also evident that organic solvents provide a higher efficiency in extracting compounds for anti-microbial activities compared to water-based methods. The highest antibacterial activity shown in organic solvents compared to aqueous extract 24, 25. Previous literature does not pertain to a single organic solvent of extract for the effectiveness of antibacterial activity from marine algae. For the present study, the solvents chosen on the polarity gradient from Hexane to water, where the solvent extract of Turbinaria conoides has significant result in all the solvent extract, whereas the other species, Sargassum plagiophyllum and Padina gymnospora shown antibacterial activity in ethyl acetate, but the methanol extract fails to show activity in any of those pathogens studied. Aqueous extracts of the marine algae studied shown no result in all the human pathogens experimented for anti-bacterial activity and so no tabulation here.

Earlier experiments reveal that the dried samples accumulated more amounts of the antibiotic principle rather than the fresh samples, where the high water content diluted and leads to dissipated activity. It is also evident that the degradation of bioactive metabolites may not occur during shade drying 26. In addition to earlier literature, the present investigation shows that Turbinaria conoides, the species of Phaeophyta showed the strongest activities against the human pathogenic bacteria in all the solvents. A study 27 on antimicrobial activity from the three families of Rhodophyta, Chlorophyta and Phaeophyta against Bacillus subtilis, Staphylococcus aureus, E. coli, Klebsiella pneumonia, showed, Padinagymnospora and Sargassum wightii, which belongs to the family Phaeophyta, were more active than C. linum of Chlorophyta, against human pathogenic bacteria using the disc diffusion method.

Four species experimented 28 from brown seaweed (Sargassum plagiophyllum, Sargassum flavellum, Sargassum binderi and Padina australis) in Malaysia, where the crude extracts showed stronger antimicrobial activity against the gram-positive bacteria (Bacillus subtilis and Staphlococcus aureus) than the gram-negative bacteria (P. aeruginosa and E. coli). Susceptibility is more in gram-positive organisms than gram-negative bacteria against the seaweed extracts, and this susceptibility is due to the difference in their cell wall structure and their composition 29. Earlier studies among the species tested, Staphlococcus aureus and Vibrio spp. were the most susceptible pathogens reported 30.

Among the three different species of seaweeds, crude extracts of Turbinaria conoides showed anti-bacterial activity against Staphylococcus epidermidis for all the solvent tested. Staphylococcus epidermidis is a facultative anaerobic bacterium, Coagulase-negative staphylococci (CoNS) which causes nosocomial infections in humans 33. In addition, it was evident from previous research that, Staphylococcus epidermidis shows an increased resistance against various antibacterial agents, when the bacteria attached to plastic surface 34 and also they are often resistant to antibiotics, including rifamycin, fluoroquinolones, gentamicin, tetracycline, clinda-mycin, and sulfonamides 35.

ACKNOWLEDGEMENT: The work is done completely supported by the Gunidy campus University laboratory. The author greatly thanks everyone, who rendered help for the work.