ABSTRACT: In their fight for supremacy and survival, microorganisms have been developing and devising various methods to inactivate the action of antibiotics. The numbers of drug resistant microorganisms with reduced susceptibility to various antibiotics are increasing. Therefore, new infection-fighting strategies are required to control microbial infections. The interaction between potent chemicals and living system contribute to the understanding of life processes and provide effective methods for treatment, prevention and diagnosis of many diseases. Phenol Schiff bases like chalcone imines and flavone imines were screened for their antimicrobial activity against a wide range of pathogenic bacteria and fungi. The in vitro activity of the compounds was evaluated by the Kirby-Bauer disc diffusion method and the MIC was determined for a few selected compounds. Most of the compounds showed significant antimicrobial activity. The compounds were found toxic to bacteria like Staphylococcus aureus, Escherichia coli, Klebsiella pneumoniae, Salmonella typhi, S. typhimurium, Shigella flexneri and Proteus species. Pseudomonas aeruginosa was found to be resistant to most of the compounds. It was noted that all the compounds were active against fungi like Cryptococcus neoformans, Candida albicans, Trichophyton mentagrophytes, Microsporum gypseum, Mucor and Rhizopus but inactive towards Aspergillus niger, Asp. flavus and Asp. fumigatus. It was interesting to note that the compounds were more fungi toxic than antibacterial. Flavone imines showed more antimicrobial activity than chalcone imines.

Chalcone condenses with substituted aniline in ethanol in presence of 2, 3 drops of concentrated H2SO4 to give chalcone imine. Chalcone imine reacts with DMSO-I2-H2SO4 system to give flavone imine. DMSO-I2 with or without H2SO4 reagent has been used for oxidative cyclization of 2-hydroxy chalcone to flavones and dehydrogenation to flavonoids 19. Phenol Schiff bases with DMSO-I2-H2SO4 system give N-phenyl benzisoxazolines 20-22. Synthesis of 8-nitro-5-chloro-4-substituted-N-(substituted phenyl) flavone imine has been reported 23.

The following compounds were synthesized by known methods 29-31.

Substituted chalcone imines were dissolved in DMSO (40ml) and conc. H2SO4, 2, 3 drops was added. The mixture was refluxed for 10 min. It was then cooled and little catalytic amount of iodine was added. The reaction mixture was again heated for 1 hour in water bath then cooled and diluted with cold water. The resulting solid mass was treated with water 10% Sodium thiosulphate solution to remove iodine and again by water and crystallized from alcohol acetic acid mixture to get flavone imine. 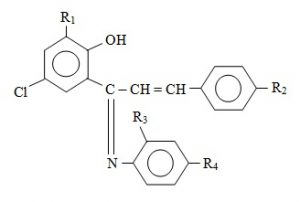 The compounds were tested in vitro for their antimicrobial activity by disc diffusion method.

Bacterial and Fungal Culture: Twelve pure bacterial cultures and eight pure fungal isolates were selected for the study. The cultures were procured from the Department of Microbiology, Government Medical College, Nagpur. The culture were confirmed by the conventional techniques 24-26 and maintained by sub culturing on semisolid nutrient agar and stored at 4-8 °C. NCTC strains of S. aureus, E. coli and Pseudomonas aeruginosa were used as control strains.

Antibiotic Susceptibility Testing: The compounds were tested in vitro for their antimicrobial activity by Kirby Bauer disc diffusion method 21.

Preparation of Discs: Wet discs were used 6.25 mm diameter discs were punched from No. 1 Whatman filter paper and dispensed in batches of 100 in screw-capped bottles and sterilized by dry heat at 140 °C for 60 minutes. The selected compounds were dissolved in methanol 22 and their solutions were prepared such that 1 ml contains 100 times the amount of antibiotic required in the disc. 1ml of this solution was added to each bottle of 100 discs and as the whole of this volume was absorbed, it was assumed that each disc will contain approximately 0.01ml of the solution.

Preparation of Inoculum: A small loopful (about 0.01 ml) of an overnight broth culture (about 10g bacteria/ml) was added to 5ml sterile isotonic saline to a concentration of 105-106 bacteria per ml.

Test Procedure: The culture plates were dried in the incubator with the lid ajar until its surface was free from moisture. 2ml of the inoculum suspension was transferred to the plate with a sterile Pasteur pipette and the plate was rotated to wet the whole of its surface. The excess fluid was removed with the pipette and the plates were dried in the incubator for 30 minutes. The compound discs were applied (2cm apart) to the surface of the plate with sterile fine pointed forceps and gently pressed to ensure full contact with the medium.

Reading Results: After incubation degree of sensitivity to compounds was determined by measuring the clear visible areas of growth free zones (zones of inhibition) produced by diffusion of compounds in the media. Zones of inhibition measured (including 6.25 mm of disc diameter) by calipers were reported in mm as shown in Table 4 and 5.

TABLE 4: BACTERIA SHOWING SENSITIVITY TO THE COMPOUNDS (SENSITIVITY MEASURED AS ZONE OF INHIBITION IN mm)

The MIC was determined by disc diffusion method 21 against the different bacteria stated in Table 1.

Determination of MIC: The MIC of the compounds for a bacterial isolate was estimated from measurement of the zone of inhibition in the disc test by reference to a standard graph which related the MIC to the zone diameter for the control strain of known degree of sensitivity. Discs containing different amounts of the compound were tested under carefully standardized conditions against the following control strains.

Initially the minimum concentration of E. coli NCTC 10418, Pseudomonas aeruginosa NCTC 10662 and Staphylococcus aureus NCTC 6571 was determined towards the 3 selected compounds (IIa, IIIi and IVf). MIC of the compounds was determined by incorporating the compound in the nutrient agar in the concentrations of 10, 20, 30, 40, 50, 60, 70, 80, 90, 100, 110, 120, 130, 140µg/ml. The inoculum of the control strain was prepared as in case of disc diffusion method and 1-2ml of the inoculum was applied on the agar surface. The plates were incubated at 37 °C for 18-24 hours and results read. The lowest concentration of the compound at which there was no visible growth was taken as the minimum inhibitory concentration.

Later the test micro-organisms were tested under the same conditions. The concentration of compound required for the inhibition of growth (MIC) was calculated from the measurement of the diameter of the zone of inhibition by reference to the standard graph.

The degree of sensitivity of the test bacteria was calculated as follows.

TABLE 6: MIC OF IIa, IIIi AND IVf AGAINST THE CONTROL STRAINS (µg/ml) 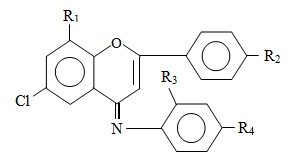 The well-known fact that Pseudomonas and S. aureus show multiple drug resistance is also noted in this study. All fungi are sensitive to almost all the compound except the Aspergillus species which are found to be sensitive only to IVc and IVf. Here also the flavone imines were more active than the chalcone imines. Cytotoxic and antimicrobial activity of some synthetic flavones were studied and reported by Sohel et al., against selected bacterial and fungal strain 34. Antifungal activity of chalcone imines is highest against the dermatophytes and candida while flavone is more active against dermatophytes, mucor, Rhizopus and Aspergillus.

It was seen that the presence of -OCH3 group invariably increased the antimicrobial activity of these compounds. It is also found that compounds containing bromo and nitro group together are more active than simple one.

CONCLUSION: All the compounds except III d and IV d were found to exhibit strong antibacterial and antifungal properties. It was also concluded that flavones imines (compounds IV a and IV f) were more active than chalcone imines. As compared to other compounds, II a, III I and IV f showed the highest antimicrobial activity.

ACKNOWLEDGEMENT: The authors greatly acknowledge the Microbiology Department of Government Medical College, Nagpur, for providing the bacterial and fungal cultures for the present investigation.