SCREENING OF BANGLADESHI VEGETABLES FOR PEROXIDASE

SCREENING OF BANGLADESHI VEGETABLES FOR PEROXIDASE

ABSTRACT: Various locally available vegetables were screened for the enzyme peroxidase. The screening was performed mainly on daikon, cabbage, cauliflower; tomato and sweet potato etc. The juices of these vegetables were extracted and subjected to ammonium sulphate precipitation followed by dialysis to remove any adhere salts. The partially purified enzymes were then subjected to peroxidase assay. All the extracts from vegetables showed the presence of appreciable amount of peroxidase. In order to quantify, kinetic measurements of all the partially purified enzymes were performed using hydrogen peroxide as substrate and guaiacol (ortho-methoxy phenol) as color forming dye. The enzymatic activities of daikon, cabbage, cauliflower, sweet potato and tomato peroxidase having optical densities of 0.056, 0.139, 0.226, 0.139 and 0.089 at 280 nm were found to be 2.2898 U/ml, 3.4381U/ml, 1.1675 U/ml, 0.3741 U/ml and 0.1901 U/ml respectively. In order to compare the above result, the data have been normalized with respect to optical densities of cabbage. Thus, the partially purified enzyme having a optical density of 0.139 shows the peroxidase activity of 5.6836 U/ml, 3.4381 U/ml, 0.7181 U/ml, 0.3741 U/ml and 0.2969 U/ml respectively for daikon, cabbage, cauliflower, sweet potato and tomato. The present result indicates that the daikon peroxidase possess the highest enzymatic activity. The UV/Vis spectra of all vegetables showed characteristics Soret absorption band with a λmax at 415 indicating the presence of heme molecule attached to apoenzyme.

Enzymes carry out most of the reactions involved in metabolism and catabolism, as well as DNA replication, DNA repair, and RNA synthesis. Some enzymes act on other proteins to add or remove chemical groups in a process known as post-translational modification. About 4,000 reactions are known to be catalyzed by enzymes 1.

The rate acceleration conferred by enzymatic catalysis is often enormous - as much as 1017-fold increase in rate over the uncatalyzed reaction in the case of orotate decarboxylase (78 million years without the enzyme, 18 milliseconds with the enzyme) 2.

Peroxidases are a large family of enzymes that catalyze oxidation reaction. As such, they are classified as oxidoreductases. Peroxidases typically catalyze a reaction of the form:

For many of these enzymes the optimal substrate is hydrogen peroxide, but others are more active with organic hydro peroxides such as lipid peroxides. The nature of the electron donor is very dependent on the structure of the enzyme.

Some enzymes require the presence of certain molecules, which are not part of their primary structure or amino acid sequence, for their enzymatic activity. These molecules are called cofactors. In peroxidase, the bound cofactor necessary for its activity is heme. Heme is a complex between an iron and the molecule protoporphyrin IX. Peroxidases can also contain a redox-active cysteine or selenocysteine residues.

Peroxidases are sometimes used as histological markers. Peroxidase is used as a soluble, easily purified model for cytochrome C oxidase.Glutathione peroxidase is a peroxidase found in humans, which contains selenocysteine. It uses glutathione as an electron donor and is active with both hydrogen peroxide and organic hydro peroxide substrate. Amyloid beta, when bound to heme has been shown to have peroxidase activity.

About 90% of the commercially available peroxidase comes from horseradish4, which does not grow in Bangladesh. In our laboratory we have tested alternative sources of peroxidase from locally available vegetables: daikon (Raphanus sativus longipinnatus L), cabbase (Brassica oleracea L.), cauliflower (BrassicaOlearacea), tomato (Solanum lycopersicum L.), sweet potato (Ipomoe abatatas L.) etc. for the commercial production of peroxidase.

Plant materials: The vegetables (i.e., daikon, tomato, sweet potato, cauliflower and cabbage) were purchased from local vegetables market and washed thoroughly in distilled water. After thorough cleansing, the vegetables were cut into small pieces as small as possible. The small pieces were blended with an electric blender. The blending was done for cell rapture and easy excretion of juice. The blending materials were collected in large beakers.

Plant extract: The blending materials were poured into Tincture Press (HP-5, Karlkolb, Germany). The juices were collected by compression using the Tincture Press at a maximum pressure of 400 bar. The juices were then filtered and centrifuged at 12,000 rpm using Ultra cooling centrifuge machine (3K-3000, Sigma, Germany) to remove any dirt material suspended in the juice. The clear supernatants were referred as crude extract.

Thus, it is necessary to remove the ammonium sulfate before proceed to subsequent steps in the purification process. The simplest way to achieve this is to dialyze the solution against 25 mM phosphate buffer pH 7 containing 500 mM NaCl, 1 mM MnCl2 and CaCl2.

Enzymatic assay of peroxidase: Based on that Bergmeyer in which the rate of decomposition of hydrogen peroxide by peroxidase, with guaiacol (ortho-methoxy phenol) as hydrogen donor, is determined by measuring the rate of color development spectrophotometrically at 436 nm at 25 oC. Reagents25 mM phosphate buffer, pH7.0 containing 50 mM NaCl, 1 mM MnCl2 and CaCl2; 18 mM guaiacol and substrate (hydrogen peroxide solution with A240 in 1 cm light path to 0.4 - 0.41) were prepared.

The reagents buffer 2.8 ml, guaiacol 50 μl, substrate 50 μl and enzyme solution having OD 0.056 at 280 nm for enzyme solution were taken into a 1cm quartz cell and the conditions are temperature 25 oC, wavelength 436 nm and light path 1 cm. The rate of increase in absorbance was recorded at 436 nm using the linear portion of the curve after the initial lag phase. The blank test was carried out without enzyme solution. Volume activity was calculated by using the following equation.

Where, Vt is final volume of reaction mixture = 3.0 mL; Vs is sample volume = 0.1 mL; ε is micro-molar extinction co-efficient of tetraguaiacol = 25.5 cm2/micro mole and 4 is derived from unit definition and principle.

The weight activity of enzyme was determined by the following equation.

RESULTS:  The vegetables daikon, cabbage, cauliflower, tomato and sweet potato have been chosen for peroxidase sources. The crude extracts obtained from different vegetables were partially purified by ammonium sulfate precipitation. 75% ammonium sulfate saturation has been optimized for precipitating most of the enzyme. All the precipitates were collected and dissolved in minimum amount of 25 mM phosphate buffer pH 7.0 containing 50 mM NaCl, 1 mM MnCl2­ and CaCl2. To remove any adhere salts from the enzyme solution, they were dialyzed against the same buffer. The enzyme solutions thus obtained were designated as partially purified enzyme. In order to quantify the enzymatic activity a specified amount (100 ml) of partially purified peroxidase from vegetables having OD 0.139 at 280 nm was added to the reaction mixture in the liquid cell and the absorbance was monitored at 436 nm with time. The absorbances at 436 nm with time for different vegetables were shown in table 1, in which the absorbance rose almost abruptly from 0-0.9041 within 0.41-2.3 min. (cabbage), the sharp increase from 0-0.4945 within 16 min. (daikon), increase within 13 min. (sweet potato), exponential increase until the time reached to 6.75 min. (cauliflower) and gradually increases within 20 min. (tomato) and then remain almost constant value for every cases.

The absorbances vs. time curves were shown in figure 1 for different vegetables. The enzymatic activity was determined from the slope of the initial part of the absorption vs. time curve using the relation mentioned in materials and method.

FIGURE 1: CHANGES OF ABSORBANCE WITH TIME DURING KINETIC MEASUREMENT OF PARTIALLY PURIFIED PEROXIDASE FROM: a) CABBAGE, b) DAIKON, c) SWEET POTATO, d) CAULIFLOWER AND e) TOMATO. 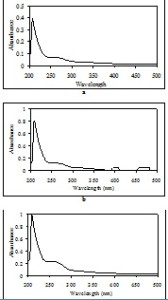 The results obtained in this research project were summarized in table 2. Where 3rd column represents peroxidase activity of partially purified enzyme obtained from different vegetables. However, these activities are not comparable, because the corresponding optical densities of the partially purified enzymes are different as mentioned in 2nd column of the table. In order to make the result comparable, we have normalized the enzymatic activity with respect to optical densities and the results have been presented in 4th and 5th column of the table.

TABLE 2: THE OPTICAL DENSITIES AND ENZYMATIC ACTIVITY OF THE VEGETABLES THAT HAVE BEEN CHOSEN AS A SOURCE OF PEROXIDASE

DISCUSSION: Several peroxidase isozymes have been isolated from plant sources and three main characteristics have been compared i.e., specific activity, absorption spectrum and the presence of heme molecule. Among the various isozymes, daikon peroxidase showed the highest specific activity. All the enzymes maintain its key heme cavity, considered to be important for peroxidase activity. This heme cavity is present in all the heme containing peroxidases belonging to the “plant peroxidase superfamily” so far sequenced. The vegetables (daikon, cabbage, cauliflower, tomato and sweet potato) that have been chosen for peroxidase source, washed thoroughly with distilled water, cut in to small pieces and poured into Tincture Press.

The juices form the aforementioned vegetables were collected by compression using the Tincture Press at a maximum pressure of 400 bar. The juices were then filtered and centrifuged at 12,000 rpm to remove any dirt. The clear supernatants were designated as crude extracts.

Both the supernatants and precipitates, thus obtained, showed positive test for peroxidase assay. Therefore, the saturation levels were increased to 50% and the precipitates were separated by centrifugation. All the supernatants from 50% saturations showed peroxidase test in ortho-methoxy phenol and the precipitate after dissolved in 25 mM phosphate buffer, pH 7.0 containing 50 mM NaCl, 1 mM MnCl2 and CaCl2 gave positive test for peroxidase.

Thus, saturation level again increased to 75% and centrifuged as above. All the supernatants from 75% saturation were not given peroxidase test, but the precipitate gave peroxidase positive test after dissolving them in 25 mM phosphate buffer, pH 7.0 containing 50 mM NaCl, 0.001 M MnCl2 and CaCl2. Therefore, 75% ammonium sulphate saturation has been optimized for precipitating most of the enzyme.

All the precipitates obtained at each stage were collected (i.e., 25%, 50%, 75% saturation) and dissolved in minimum amount of 25 mM phosphate buffer pH 7.0 containing 50 mM NaCl2, 1 mM MnCl2­ and CaCl2. To remove any adhere salts from the enzyme solution, they were dialyzed against the same buffer. The enzyme solutions thus obtained were designated as partially purified enzyme.

In the screening of particular enzyme, it is very important to confirm that the isolate contain active forms of enzyme. Therefore, we first measured the peroxidase activity of the crude extract isolated from cabbage. When we added hydrogen peroxidase to the enzyme solution in the liquid cell of the spectrophotometer, a sharp increase in the absorption at 436 nm was observed indicating the formation of tetraguaiacol from guaiacol, whereas absorption remained almost unchanged in the absence of crude extract. This indicates that the crude extract contain appreciable amount of peroxidase.

Usually peroxidase showed a small absorption band in the blue region of the optical absorption spectrum, called Soret band arise from the heme molecule attached to theprotein. Spectral analysis of all the enzymes revealed the presence of Soret band with a lmax at 415 nm, indicating that all the isolated peroxidase were heme-containing enzyme. The location of the Soret absorption band of iron heme can provide the information about the denaturation of heme enzyme. When enzyme is denatured, the Soret band will shift or disappear.

The presence of small Soret band also indicates that all the enzymes partially purified from different vegetables were in a native condition. In addition peroxidase consists of several amide (peptide) backbone with various side chains on the a-carbons between each amide. The dominant chromophore of the amide group has a weak np* transition at about 220 nm and an intense pp* transition at about 195 nm.

Thus, absorption maximum at around 210 nm mainly arises from the peptide bonds present in the enzyme. The enzyme peroxidase also contains phenylalanine, tyrosin and tryptophan in its molecular structure. These aromatic amino acids show the electronic transitions at around 270 nm, which is also present in all the absorption spectrum.

ACKNOWLEDGEMENT: The authors are thankful to the department of Applied Chemistry and Chemical Engineering, Rajshahi University, Bangladesh for giving us laboratory facilities for the research works.