SCREENING OF BIOACTIVE COMPOUNDS FROM LEAF OF CENCHRUS CILIARIS L. FROM THAR REGION OF RAJASTHAN, INDIA

SCREENING OF BIOACTIVE COMPOUNDS FROM LEAF OF CENCHRUS CILIARIS L. FROM THAR REGION OF RAJASTHAN, INDIA

ABSTRACT: Cenchrus ciliaris L. (Poaceae) commonly known as “Dhaman grass”, is a common famine food used during drought and scarcity of food in Rajasthan. The present investigation was carried out to determine the phytochemical composition of leaf of C. ciliaris using gas chromatography - mass spectrometry technique. The mass spectrum of the compounds found in the extract was matched with the national institute of standards and technology (NIST) and Willey 8 library. This study could segregate several natural bioactive compounds from the leaf using solvents of different polarity i.e. methanol, ethyl acetate and hexane. Sixty one biologically active compounds were extracted amongst them Tetacontane is present in maximum amount (30.09%) with RT = 25.302 min in the hexane leaf extract. Hence the present study helps to predict the formula, structure and activity of phytoconstituents from the leaf of C. ciliaris that can be used for drug design and justifying the use of this plant to treat many ailments as herbal medicine.

INTRODUCTION: Medicinal plants having high therapeutic value are becoming popular in the area of medicine for their less expense and less side effects as compared to modern allopathic drugs. The traditional medicines in the last few decades emerged to have immense acknowledgements in terms of their potential therapeutic value and it is estimated that 80% of community depends upon traditional medicine for their primary healthcare 1. India is one of the 12 mega biodiversity countries of the World, which represents 11% of World's flora in about 2.4% of global land mass. Approximately 28% of the total Indian flora and 33% of angiosperms occurring in India are endemic. Higher human population density in India puts undue pressure on medicinal plants 2.

Natural compounds extracted from plants have been suggested as alternative sources for antibiotics. Natural products are widely viewed as templates for structure optimization to make perfectly effective drugs. Natural products have historically been incredible as a source of therapeutic agents. Natural products have the characteristics of high chemical diversity, biochemical specificity and other molecular properties that make them favourable as lead structures for drug discovery 3.

Extraction is the main step for the recovery and isolation of bioactive phytochemicals from plant materials. Analysis and extraction of plant matrices are important processes for the development, modrnization and quality control of herbal formulations 4. Hence for the discovery of lead compounds to be used as therapeutic drugs, the active principal in medicinal plants needs to be identified 5. GC-MS method can serve as an interesting tool for testing the amount of some active principle of herbs.

It combines two analytical techniques to a single method of analyzing mixtures of chemical compounds. Gas chromatography separates the components of the mixture and mass spectroscopy analyzes each of the components separately 6. Cenchrus ciliaris, known as Dhaman grass is extremely variable, tufted (sometimes shortly rhizomatous) with branching culms and perennial with types ranging in habit from ascendant to erect.

Leaf blades are linear, long, green, scabrous and hairy at the base. Panicle erect, grey, hairy with false spike. Each bur-like fascicle comprises of a single spikelet or cluster of 2 - 4 spikelets that in turn remain surrounded by involucres of bristles. Bristles are hairy, making the fascicle an adhesive quality 7.

The desert ecosystem covers about 2% of the total landmass (Spreading over states of Rajasthan, Gujarat, Punjab and Haryana) in India, and is characterized by low precipitation and largely barren arid lands with only sparse or seasonal vegetal cover 8.

This grass is gaining attention in various fields of research as it is more efficient C4 plant at gathering CO2 and utilizing nitrogen from the atmosphere and recycling of N in the soil. It is more competitive under the conditions of high temperature, solar radiation and low moisture 9.

Collection of Plant Material: Leaves of C. ciliaris were collected from Jodhpur district (Rajasthan) India, during August-October, 2016. Further identification and authentication of the specimens was done from Botanical Survey of India, Jodhpur (Rajasthan). The leaves were thoroughly washed with tap water followed by distilled water, shade dried for 20 days and grounded to fine powder. After sieving they were transferred to airtight polyethylene zipper bags for further use.

Preparation of Plant Extracts: The powdered plant leaves (5 g) were successively extracted with methanol, ethyl acetate and hexane. The extraction was done by hot continuous Soxhlet extraction 10. The extracts were stored at - 4 °C till further use.

Velocity was maintained at 40.5 cm/sec and pressure was maintained at 81.9 kPa. For GC-MS detection Helium gas (99.99%) was used as a carrier gas at a constant flow rate. Total flow was 64.7 mL/min and column flow was 1.21 mL/min. Injector and mass transfer line temperature were set at 200 °C and 240 °C respectively.

The oven temperature was programmed at 80.0 °C and injection temperature maintained at 260.0 °C. Total running time of GC-MS was 46.28 minutes. The relative % amount of each component was calculated by comparing its average peak area to the total area, software adopted to handle mass spectra and chromatograms was Turbo mass. The relative percentage of the each extract constituents was expressed as percentage with peak area.

Identification of Components: Interpretation on mass spectrum of GC-MS was done using the database from National Institute of Standard and Technology (NIST), USA and WILEY8 library. Library contains more than 62,000 patterns. The mass spectrum of the unknown component was compared with the spectrum of the known components stored in this library. Molecular formula, molecular structure and weight of the compounds of the test samples were ascertained.

RESULTS: The analysis and extraction of plant material play an important role in the development, modernization and quality control of herbal formulations.

Total 61 bio-active constituents were identified including both major and minor constituents shown in Table 1. GC-MS chromatogram of the methanol, ethyl acetate and hexane extracts of leaf of C. ciliaris revealed 66, 78 and 58 peaks are shown in Fig. 1 indicating the presence of 63, 66 and 47 bioactive compounds respectively.

Molecular structure of important and common compounds are presented in Fig. 2. 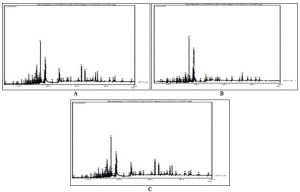 FIG. 1: GC-MS CHROMATOGRAM OF CENCHRUS CILIARIS LEAF IN (A) METHANOL (B) ETHYL ACETATE AND (C) HEXANE 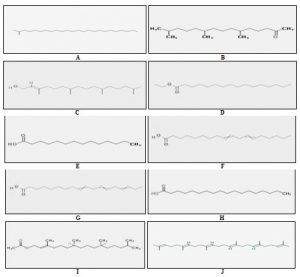 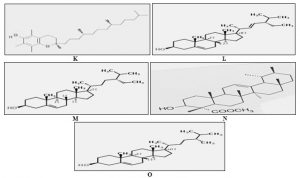 ALA, a nonproprietary, naturally occurring omega-3 fatty acid found in foodstuffs shows anti-inflammatory property. ALA reported as a potent nutraceutical that protects the brain from stroke, characterized by its pleiotropic effects in neuroprotection, vasodilation of brain arteries and neuroplasticity 13. Octadecanoic acid and stearic acid exhibit antifungal, antitumor and antibacterial properties 14. Tetradecanoic acid, a saturated fatty acid occurring in most animal and vegetable fats, particularly butterfat, coconut palm and nutmeg oil, is used to synthesize flavour and as an ingredient in soaps and cosmetics. Tetradecanoic acid has an antioxidant, lubricant, hyper-cholesterolemic and cancer-preventive activity 15. Monohydroxy commic acid B, commonly known as Methyl commate B is found in the resin of Commiphora glandulosa Schinz 16. Methyl commate B is a triterpene glycoside in nature. Triterpene glycosides are natural highly polar compounds with low volatility and were discovered in higher plants. They are well-known for their cytotoxic, antimicrobial, anticoagulant, hemolytic, antiviral, antiparasitic and antitumor properties 17. 2-Pentadecanone, 6, 10, 14- trimethyl is a diterpene in nature. Diterpenes show potent and selective activity towards platelet-activating factor increasing in conditions of shock, burns, ulceration and inflammation.

As per clinical trial report, its importance in bladder hyperreflexia and diabetic neuropathy and as an anticancerous agent against ovarian, breast and lung cancer as well proved 18. Squalene is a triterpene that is an intermediate in the cholesterol biosynthesis pathway. It was so named because of its occurrence in shark liver oil; it is the main component of skin surface polyunsaturated lipids and shows some advantages for the skin as an emollient and antioxidant for hydration and antitumor activities. Squalene considered as an interesting natural molecule, with broad applications in food industry, cosmetics and in prevention and treatment of human diseases 19.

Vitamin E is a group of eight different compounds, but only two of the forms, α-tocopherol and γ- tocopherol, are commonly found in the human body. Vitamin E is the most potent lipid-soluble antioxidant 20. Phytosterols produce health benefits in animals/humans such as reduction of cholesterol level with decreased risk of coronary heart diseases, anti-inflammatory activities, induction of apoptosis in cancer cells and in prevention and treatment of diseases 21.

Stigmasterol inhibits OVA induced asthma in guinea pigs 25. Phytosterols such as β-sitosterol structurally resembles to cholesterol and able to inhibit the absorption of cholesterol, cancer-cell growth, angiogenesis, invasion and metastasis. β-sitosterol is well known natural sterol in composition of known herbal drugs used for the treatment of benign prostatic hyperplasia and prostate cancer. Besides the compound elevated enzymatic and non-enzymatic antioxidant in cells making it effective anti-diabetic, neuroprotective and chemoprotective agent as well 26.

CONCLUSION: This study was aimed at identifying the best solvent system to obtain maximum number of phytocompounds with strong bioactivities from this C4 plant of stressed conditions. GC-MS itself is a best tool and it has been find out that ethyl-acetate is a best solvent for extraction of compounds from C. ciliaris. We observed that C. ciliaris is a potent grass yielding compounds of high therapeutic value that after clinical and other trials can be used by drug-developing companies. A further study involving purification of these phytocompounds individually and determining their mechanistic actions will be the future scope of this study which will help their safer application in therapeutics.