SCREENING OF MEDICINAL PLANTS USED FOR PREVENTION AND TREATMENT NEURODEGENERATIVE DISEASES: A REVIEW

SCREENING OF MEDICINAL PLANTS USED FOR PREVENTION AND TREATMENT NEURODEGENERATIVE DISEASES: A REVIEW

ABSTRACT: Amyotrophic lateral sclerosis (ALS), Parkinson's disease, Alzheimer's disease, and Huntington's disease occur as a result of the neurodegeneration process. No specific treatment was found to reduce or stop neurodegenerative diseases. In conventional medicine, many plants have been used to treat neurodegenerative diseases. Natural products play an important role in the prevention and treatment of various neurodegenerative diseases, as well as neuronal dysfunction. Different studies suggest that natural products, such as polyphenolic and plant-separated alkaloids, may delay neurodegeneration and improve memory and cognitive function. Ethnopharmacological studies have provided data to identify potential new drugs in plant sources. Recently many drugs found in medicines have been isolated from plants or their origin, including anticholinesterase (Anti-ChE) isolated plant alkaloids that have been investigated in terms of their potential in the treatment of Alzheimer's disease (AD). The anti-inflammatory and antioxidant activities of plants and soluble components of plants are used to improve inflammation, anxiety, seizures, and more. Medicinal plants have beneficial properties due to the presence of complex chemical compounds to treat toxins in the nervous system. This review article explored the use of medicinal plants to treat neurodegenerative diseases.

INTRODUCTION: Neurodegeneration is the progressive loss of the neuron structure or functions in the brain. Neurons are the building blocks of the nervous system which include the brain and spinal cord. Neurons normally don't replicate or restore themselves, so when they become injured or die they cannot be replaced by the body. Many neurodegenerative diseases are caused by a genetic mutation, protein misfolding, protein degradation pathway, membrane damage, mitochondrial dysfunction.

Neurodegenerative diseases including amyotrophic lateral sclerosis (ALS), Parkinson's disease, Alzheimer's disease, and Huntington's disease (HD) occurs as a result of neurodegeneration process 1, 2. Alzheimer’s disease (AD) has been hypothesized to be a protein misfolding disease caused by an accumulation of abnormally folded A-beta and tau proteins in the brain characterized by loss of neurons and synapses in involving the basal forebrain cholinergic system, amygdala, hippo-campus, and several cortical areas.

Alzheimer’s disease is the most common form of dementia. Alzheimer’s disease develops differently for every individual. The most common symptoms are difficulty in remembering recent events, known as short-term memory loss. As the disease advances symptoms can include confusion, irritability, aggression, mood swings trouble with language and long term memory loss progressively bodily functions are lost finally leading to death. Most of the autosomal dominant familial Alzheimer's disease can be attributed to mutations in one of three genes those encoding amyloid precursor protein (APP) presenilins 3. Alzheimer’s disease (AD) affects approximately 5.4 million people in the United States, with its prevalence expected to increase dramatically over the next 20 years.

Currently, about 34 million people worldwide have Alzheimer's disease, and lifestyle factors that are modifiable in principles, such as physical inactivity and obesity are associated with a heightened risk for Alzheimer's disease. There is no cure for Alzheimer’s disease, and there are no accessible treatments that stop or reverse the succession of the disease 4. Accessible treatments offer relatively small symptomatic advantage but remain palliative in nature. Donepezil, Calantamine, Tacrine, Rivastigmine, Memantine, Piracetam. etc., are some drugs available for the treatment of Alzheimer’s disease. Some medicinal plants also available for it, having neuroprotective activity 5. Huntington’s disease (HD) is a rare inherited progressive neurodegenerative disorder resulting caused by a single mutation in the gene those codes for the protein Huntington. HD is primarily characterized by selective neuronal loss, primarily in the cortex and striatum, cognitive abnormality, psychiatric deterioration, and loss of medium spiny neurons. Nrf2 is the redox-sensitive transcription factor necessary for the synthesis of glutathione a natural antioxidant that play an imperative role in HD. BDNF also plays a significant role in the survival and activity of the neurons that die in Huntington‟s disease 6.

The incidence of HD is much higher in European populations than in East Asia. Presently, the Maracaibo region of Venezuela has the uppermost reported worldwide prevalence at 700 cases per 100,000 people. There is no cure for Huntington’s disease but different symptomatic drugs are available for it. Hence enormous progress has been made in laboratories throughout the world. There are diverse drugs that may become treatments that can relieve some symptoms and, in some, improve the quality of life in Huntington’s disease. Novel advancement also takes place as the use of genetically altered stem cells. Different models are available for Huntington‟s disease like excitotoxic models, genetic models, metabolic models 7, 8.

Parkinson’s disease (PD) is the second most chronic progressive neurodegenerative disorder characterized by the clinical feature are resting tremor, bradykinesia, righty and postural instability caused by early prominent death of dopaminergic neurons in the Substantia nigra pars compacta (SNpc) and widespread occurrence of alpha-synuclein (aSyn), an intracellular protein. PD is also related to non-motor symptoms, which may lead to motor symptoms by more than a decade. These non-motor symptoms become difficult symptoms in the later stages of PD 9. The incidence and prevalence of PD increase with advancing age, with a prevalence of 160/ 100000 in Europe rising to 4% of the population over 80. Currently, the mainstay of PD management is pharmacological therapy; however, these symptomatic therapies have the most important limitations in advanced disease. Numerous disabling features increase later in the course of the disease, including non-motor symptoms, dopamine resistant motor symptoms, and motor complications of long-term dopamine therapy. Although there have been significant advances in the medical and surgical treatment for PD, ultimate disease-modifying therapy is lacking. However, researchers are optimistic that they will be able to identify the potential targets for disease modification 10, 11.

Amyotrophic lateral sclerosis (ALS) is an adult-onset fatal devastating neurodegenerative disease that results in progressive obliteration of neurons of the spinal cord and motor neurons of the cortical brain leading to fatal paralysis. Patients typically die from respiratory failure within 3 years of symptom onset. The incidence of ALS in Europe is 2–3 cases per 100,000 individuals in the general population, and the generally lifetime risk of developing the disease is 1:400. ALS is familial in 5% of cases and shows a Mendelian pattern of inheritance 12. ALS is recognized to overlap with front temporal dementia. Multiple cell types and mechanisms are likely involved in ALS pathogenesis, which makes the progress of conventional drug therapies difficult. The cause of ALS is not yet elucidated; however, mutations in genes SOD1, C9orf72, TDP-43, FUS/TLS, angiogenin, and others have been associated with ALS. Riluzole remains the only efficient drug and extends the average survival of patients by 3–6 months. Optimal treatment is based on symptom organization and protection of the quality of life, provided in a multidisciplinary setting. The discovery of further successful disease-modifying therapies remains a critical need for patients with this devastating condition 13. 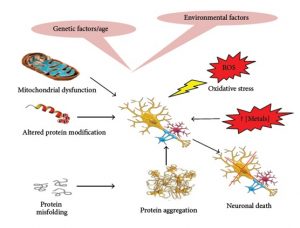 There is no drug to cure neurodegenerative diseases, but in Ayurveda, there are such remedies that slow down the disease. Ayurveda system is one of the world's oldest medical systems. It originates in India more than 3000 years ago and remains one of the country's traditional health care systems. Its concepts about health and disease are to promote the use of herbal compounds, to eliminate the root cause of the disease by restoring balance and also prevent the recurrence of the imbalance 14. Herbal medicine has existed world with the long recorded history and they were used in ancient Chinese, Greek, Egyptian and Indian medicine for various therapies purposes. The world health organization (WHO) estimated that 80% of the world's population still uses herbal medicines for their health care. In Ayurveda, single or multiple herbs are used for the treatment. The Ayurveda literature „Sarangdhar Samhita‟ dominates the concept of polyherbalism to achieve greater therapeutic efficacy. According to Ayurveda, neuro-degenerative disease is an imbalance of Vata Pitta and Kapha 15.It was found that herbal medicinal drugs have great importance for the treatment of various diseases. It was also found that out of total medicinal drugs, 50% are natural in origin also, according to Ayurveda, there is great importance to natural drugs 16.In the present review study, it was aimed to highlight the following information of different plants are useful in the treatment of neurodegenerative diseases like AD, PD, HD and ALS.

TABLE 1: LIST OF MEDICINAL PLANT USE IN TREATMENT OF NEURODEGENERATIVE DISEASES