SCREENING OF MICROORGANISMS FROM DIFFERENT SITES OF RESTAURANTS AND DHABAS

SCREENING OF MICROORGANISMS FROM DIFFERENT SITES OF RESTAURANTS AND DHABAS

ABSTRACT: A food borne illness or disease is exactly what the term indicates a disease or illness caused by the consumption of contaminated foods or beverages. It would seem rather obvious that a food borne microbial pathogens, or a microbial toxic product, or another poison such as a poisonous chemical that has somehow contaminated the food and beverages leads to one of the many different food borne illness. Many microorganisms present are associated with infection, spoilage and contamination of food in home, restaurants, dhabas and other various sites. We collected and isolated bacterial and fungal strains by various morphological characteristics, biochemical identification etc. Disc diffusion method was used to study antibiotic resistant capability against infectious microorganisms. In the antibiotics Kirby Bauer (disk diffusion) test only 3 tested S. aureus displayed a inhibition zone against some antibiotic, and they resistant against by Amoxicillin, Oxacillin, Ciprofloxin, but sensitive to Doxycycline, Erythromycin. We tested Bacillus subtilis and Pseudomonas also by antibiotic disc diffusion method and observation of investigators in which only few antibiotics showed resistant against isolates. In Bacillus subtilis resistant was observed against antibiotics Oxacillin, Doxycycline and Pseudomonas aeruginosa more of the antibiotics showed positive result like resistant showing Novofloxacin, Aztreonam, Cefotaxine, Cefixine, Cefdinir. Some fungus isolates were also identified and observed and they are very harmful to human health. The study emphasizes on the microorganism which are present in different sites of local market and restaurants due to which the society is suffering with serious health hazards caused by different food products. There is need to study more in a future to decrease food contamination, food spoilage and overall food illness.

INTRODUCTION:Major public health problems worldwide are the leading causes of illnesses and death. It is scientifically proven that the contributing factors for this basal problem are the pathogenic bacteria, viruses, and toxins produced by microorganisms that contaminate the edible products 1.

Food microbiology focuses on the general biology of the microorganisms that are found in food including inhabitation, creation, or contamination of food, causing food spoilage. There is potential for a wide range of vegetables and fruits products to become contaminated with microorganisms 2.

The products of most concern are sprouted seeds and unpasteurized juices. In addition, microorganisms are essential for the production of foods such as cheese, yogurt, other fermented foods, bread, beer and wine 3. Bakery products are easily subjected to include physical, chemical and microbial spoilage spoilage problems.

Water activity is the main cause of microbiological spoilage, in particular mould growth. Thorough preparation of food, including proper cooking, eliminates most bacteria and viruses 4. However, toxins produced by contaminants may not be heat-labile, and some are not eliminated by cooking. Fermentation is one way that has a common effect of changing microorganisms in edible form and also making them less hospitable to other microorganisms, including pathogens and spoilage causing microorganisms, thus extending the food’s shelf-life 5.

Food borne illness, yet preventable, is a common, costly health problem. Many different disease-causing microbes, or pathogens, can contaminate foods, so there are many different food borne infections 6. In addition, poisonous chemicals, or other harmful substances can cause food borne diseases if they are present in food. The short incubation time of the infectious pathogens results in major health hazards, since the toxin is pre-formed in the food and ingested to different parts of the body 7. The growth and production of pre-formed toxin by foods is of particular concern, with enter toxin producing strains, the toxigenic pathogens. Infectious invasive agents like Salmonella, Listeria monocytogenes, Campylobacter and enter invasive Escherichia coli, Staphylococcus aureus, Bacillus cereus, Clostridium botulinum, Pseudomonas aeruginosa, Mold, Rhizopus and Candida8.

This primary and crucial problem related to food and growth of all the pathogenic microorganisms is the processing and handling of food, by cross contamination from some other raw agricultural product and/or by the established environment. Microorganisms if provided with suitable environment, temperature, moisture, nutrients and time without providing a hygienic conditions for and to the edible products causes deleterious effect to human health 9.

While many diseases are transmissible from person to person or from animals to humans, only a few are transmitted through foods. Diseases that are caused by eating food are usually referred to as food poisoning or food borne illnesses 10. This study is associated with the effect of antimicrobial effect of various drugs on the bacterial and fungal strains present in food production, and in particular, bacterial pathogens 11.

Sample collection: The samples were collected from raw vegetables, fruits, canned food products from the local market and food containers, utensil washing area and gas burner in restaurants. The sample collection was performed according to standard method given by APHA 12. The site names were coded for simplicity as A, B, C, D, E and F. 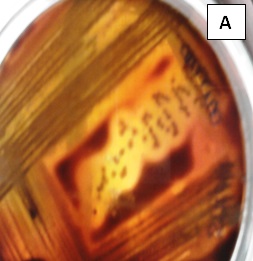 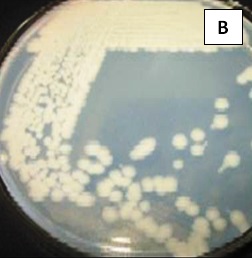 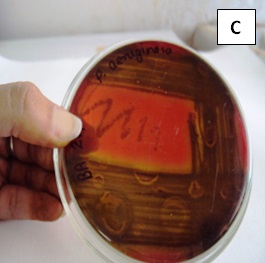 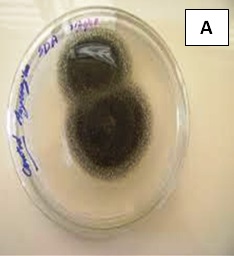 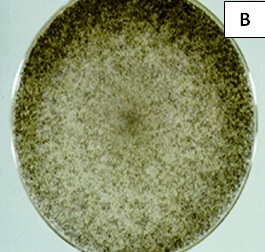 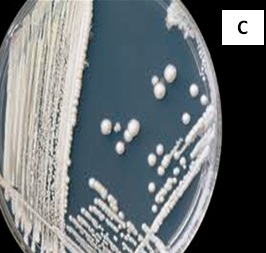 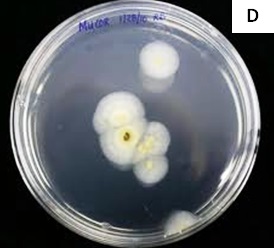 Morphological characterization: The isolated microbes were characterized on the basis of simple staining. Bacterial cultures were identified by Gram staining and fungus strains by lactophenol cotton blue staining.

Antibiotic Assay: The antibacterial susceptibility testing of the isolates was done using the Kirby-Bauer 15 disk diffusion method. A small inoculum of each bacterial isolate was inoculated on Mueller-Hinton plates and antibiotic discs of the following drug contents- Doxycycline Hydrochloride, Erythromycin, Amoxicillin, Oxacillin, Ciprofloxacin, Gentamycin, Nitrofurantoin, Nalidixic acid, Cefotaxine, Ofloxacin, were placed on the plates, spacing them well to prevent the overlapping of inhibition zones. The plates were incubated at 37oC for 24 hours, and the diameters were recorded to determine susceptibility or resistance of the isolated microorganism towards each selected antibiotics (Figure 3). 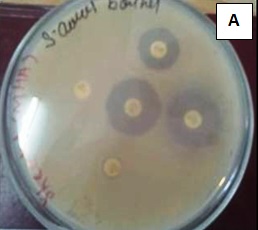 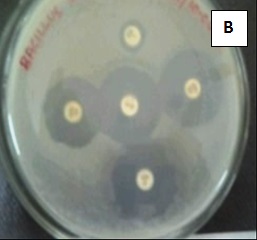 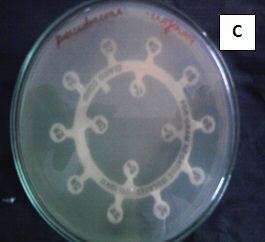 RESULTS: Bacteria and fungus can cause fruits and vegetables to get mushy or slimy, or meat to develop a bad odor. There are different spoilage bacteria and fungus which grow well at room temperature. The large number of microorganisms and their waste products cause the objectionable changes in odor, taste and texture. In the present study, different samples were collected from various areas of six different sites. Three bacterial and four fungal isolates were studied out of the samples collected.

The antibiotic resistant and sensitivity of S. aureus and B. subtilis isolates against Doxycycline Hydrochloride, Erythromycin, Amoxicillin, Oxacillin, Ciprofloxacin is mentioned in Table 1 that of P. aeruginosa against Gentamycin, Nitrofurantoin, Nalidixic acid, Cefotaxine and Aztreonam in Table 2.

DISCUSSION: People are at higher risk for developing food borne illness. These include pregnant women and their unborn babies, new borne, young children, older adults and people with weakened immune system. There are two kinds of food borne bacteria: one that spoils your food, one that makes you sick and it’s good to be familiar with both 16. A food borne illness or disease is exactly what the term indicates a disease or illness caused by the consumption of contaminated foods or beverages.

However, the microbes or toxin enters the body through the gastrointestinal tract and often causes nausea, vomiting, abdominal cramps and diarrhea, which are common symptoms in many foods borne diseases 17.

The spectrum of food borne diseases is constantly changing. A century ago, typhoid fever, tuberculosis and pasteurization of milk, safe canning clean kitchen and disinfection of water supplies have conquered those diseases. Newly recognized microbes are emerging as public health problems for several reasons. They are easily spreading throughout the environment and new microbes are getting evolved changing the ecology18.

The aim of our present study was to emphasize on the harmful effect of such microorganisms from different areas/sites of Restaurants and Dhabas. We isolated different types of microorganism which includeS. aureus, P. aeruginosa, B. subtilis, A. niger, Mucor, Rhizopus, C. albicans. These isolates were identified by biochemical characterization and we also observed the antibiotic susceptibility test against isolates of different strains of S. aureus, B. subtilis, and P. aeruginosa. In the antibiotic disk diffusion test on the Mueller- Hilton medium, S. aureus displayed inhibition zone against some antibiotic and they were resistant against Amoxicillin, Oxacillin, Ciprofloxin, but sensitive to Doxycycline, Erythromycin. We also tested B. subtilis and Pseudomonas by antibiotic disc diffusion method and observed that only few antibiotics showed resistant against isolates.

B. subtilis was resistant against Oxacillin, Doxycycline but were sensitive to Erythromycin. Positive results was observed in case of P. aeruginosa like resistant showing Novofloxacin, Aztreonam, Cefotaxine, Cefixine, Cefidnir but sensitive towards Ciprofloxacin, Amikacin. Many microorganisms present are associated with the infection and spoilage, contamination of food in home and restaurants and other various sites.

To understand the pathogenesis of these infections we have focused upon the process of adherence of these microorganisms on these different sites and on food and used various methods to quantify/ identify number of microorganisms present to surfaces 19.

Major food spoilage due to microorganisms like S. aureus, E. coli, Salmonella, Listeria mono-cytogenes, Aspergillus, Mucor, Candida and Rhizopus has been observed.Some microorganism’s strains are poisonous and dangerous to human health. Food production practices and consumption habits have changed, and through the development of better laboratory facilities, identification of important microbes have been established which were previously unrecognized.

ACKNOWLEDGEMENT: Authors extend immense gratitude towards Department of Microbiology, Barkatullah University, Bhopal for laboratory facility. Also would like to acknowledge the members of certain restaurants and dhabas of Bhopal for allowing the collection of food samples from specific areas.