ABSTRACT: Marine algae are one of the largest producers of biomass in the marine environment. They produce a wide variety of chemically active metabolites in their surroundings, potentially as an aid to protect themselves against the other settling organisms. These seaweeds are an immense source of bioactive molecules for the exploration of novel drugs. The present investigation deals with the screening of phytochemical composition, fatty acid composition and antioxidant activity of the green edible seaweed Caulerpa lentillifera (Family: Caulerpaceae) (TSN: 6973 & APHIA ID: 211475). The seaweed was collected from Mandapam Coast, Tamil Nadu, different solvents were used for the preparation of seaweed extract. The Phytochemical constituents of seaweeds, such as carbohydrate, protein, tannins, phytosterols, glycosides, alkaloids, flavonoids, diterpenes, resins and saponins of C. lentillifera were analyzed using standard methods. Fatty acid profile was investigated using Gas chromatography Mass spectrometry (GC-MS). Various fatty acid components are analyzed using GC-MS and nearly 35 components were recorded.  In the present investigation, the in-vitro analysis of antioxidant property has been confirmed. From this study, it is evident that Caulerpa lentillifera contains various bioactive compounds and can be recommended as seaweed of phytopharmaceutical importance. The seaweed extracts showed high antioxidant activity which is influenced by its phytochemical and fatty acid contents.

INTRODUCTION: As more than 70% of the world’s surface is covered by oceans, the wide diversity of marine organisms offer a rich source of natural products 1, 2. Marine algae are one of the largest producers of biomass in the marine environment 3-6. They produce a wide variety of chemically active metabolites in their surroundings, potentially as an aid to protect themselves against the other settling organisms.

These active metabolites, also known as biogenic compounds, such as halogenated compounds, alcohols, aldehydes, and terpenoids are produced by several species of marine macro and microalgae. They have antibacterial, antioxidant, antifouling, and antifungal properties, which are effective in the prevention of biofouling and have other likely uses, as in therapeutics 6-13.

Green seaweed from the genus of Caulerpa consists of one cell by many nuclei, often found in tropical and subtropical waters 14, 15. Caulerpa lentillifera is commonly used as food for human 16. It is popular as a human food because of its nutritional value such as iodine, vitamins A and C, minerals and others 17. It is favored by the consumers because of its soft, succulent grape-like structure.

However, these sea grapes are known as an efficient bio-filter that has the ability to accumulate contaminants from its sources. Fatty acids derived from marine organisms differ in chemical structures which served as a biological marker. It has the ability of biological activity due to the characteristic of living environment 18.

Several studies have reported the activity of essential fatty acids from seaweed. ω-3 and ω-6 obtained from Undaria pinnatifida could act as an anti-inflammatory and pro-inflammatory agents 19-22. The Fatty acids such as Hexadecatetraenoic acid (HDTA) C16:4 ω-3, octadecatetraenoic acid (ODTA) C18: 4 ω-3, linoleic acid (LA) C18: 2 ω-6 and α-linolenic acid (ALA) C18: 3 ω-3 derived from Ulva pertusa and Ulva fasciata these components were known to have algicidal activity 23. Antioxidants have multiple functions in biological systems, including the defense against oxidative damage and participation in the major signaling pathways of cells. One major action of antioxidants in cells is to prevent damage caused by the action of reactive oxygen species 24-27. Free radicals are responsible for aging, and their presence in excess constitutes the cause of various human diseases. Different studies have shown that, antioxidant substances which scavenge free radicals and play an important role in the prevention of free radical-induced diseases 28-31. This action helps in protecting the body from degenerative diseases. In the present investigation, the screening of phytochemicals, fatty acid composition and antioxidant properties of seaweed C. lentillifera have been carried out.

Sample Collection: Fresh marine seaweed Caulerpa lentillifera (TSN: 6973 & APHIA ID: 211475) was collected from the Mandapam coast, Tamil Nadu, India. The collected sample was washed with tap water to remove epiphytes and other marine organisms then washed with distilled water and dried at room temperature. The dried seaweed was sieved and made into powder.

Preparation of Seaweed Extract for Screening of Phytochemicals Constituents: The extract was prepared using different solvents such as chloroform, methanol, DMSO and distilled water. About 200 mg of seaweed powder was mixed with different solvents separately and extracts were prepared using the Soxhlet Apparatus. Each extraction was carried out in a Soxhlet apparatus for 24 h, and after evaporation, in a vacuum, the extracts were stored at -20 ºC until use 32.

Preparation of Seaweed Extract for Analysis of Antioxidant Activity: About 10 gm of plant powder was mixed with 10 mL of Dimethyl Sulfoxide (DMSO). The mixture was stirred for 24 hours in a magnetic stirrer. Then the mixture was filtered by vacuum filtration. The filtered solid was dried at 80 ºC for 24 h. After complete drying, the solid was weighed; from this weight, the dissolved crude seaweed extract in the filtrate was calculated.

Determination of Antioxidant Activity: The antioxidant activity in an extract of C. lentillifera was determined by the following assays.

Ascorbic acid was used as a standard.  The stock solution of DPPH (0.1 mM) in DMSO has been prepared. 2 ml of the stock solution was added to the 2 mL of DMSO (containing sample) and the absorbance was recorded at 517 nm. The percentage of inhibition has been calculated from the blank and test solution. DPPH of the solution has taken as a negative control. The % inhibition was calculated using the formula given below.

Assay of Total Antioxidant Capacity: The assay of total antioxidant capacity of the seaweed extract was conducted according to the method of Prieto, et al., (1999). About 3 ml of antioxidant reagent (0.6 M H2SO4, 28 mM Na3PO4 and 4 mM ammonium molybdate) were added to the test samples with various concentrations such as 10, 50, 100, 250 and 500 µg/ml. The test mixture to accomplish proper diffusion with phosphomoly-bdenum reagent was incubated at 95 ºC for 90 minutes in a water bath. The total antioxidant activity of extracts and vitamin C (Ascorbic acid) the standard drug was measured and determined their absorbance at 695 nm using a spectrophotometer. The total antioxidant activities were calculated using the formula.

GC – MS analysis of Fatty Acid Profile: The Gas Chromatography and Mass Spectrometry (GC-MS) analysis were done in order to know the components of the experimental samples. The components were analyzed by GC-MS (SHIMADZU QP 2010) employing the electron impact (EI) mode at an ionizing potential of 70 eV with a 30 m × 0.32 mm film thickness and 1.8 μm capillary column (Resteck-624 MS) packed with 5% phenyl dimethyl silicone at an ion source temperature of 200 °C. For further analysis, GC-MS settings were as follows: the initial column temperature was set at 45 °C and held for 4 min.

Analysis of Phytochemicals: The Phytochemical constituents of seaweed, such as carbohydrate, protein, alkaloids, glycosides, flavonoids, tannins, phytosterols, diterpenes, resins, and saponins were analyzed and given in Table 1. Among the three different solvents, such as chloroform, methanol, and water used in the present study, the methanol was found to be the most suitable solvent. The extract prepared using methanol found to contain all the phytochemicals analyzed in the study except, Glycosides and Tannins. Whereas, the extracts prepared using chloroform and distilled water showed only five components out of ten analyzed. The results obtained were corroborated with the previous reports.

GC-MS Analysis of Fatty Acid Profile: As per GC-MS analysis, in the present investigation, twelve chemical constituents have been identified from the Chloroform extract and twenty-three the methanolic extract of green alga Caulerpa lentillifera. The GC-MS profile of the compounds identified have indicated in Table 2, 3, and 3a and depicted in Fig. 1 and 2.

DPPH Free Radical Scavenging Assay: DPPH has been used extensively as a free radical to evaluate reducing substances. A freshly prepared DPPH solution exhibits a deep purple color with an absorption maximum at 517 nm. This purple color generally fades/disappears when an antioxidant is present in the medium.

TABLE 2: LIST OF COMPOUNDS IDENTIFIED FROM CHROMATOGRAM OF CHLOROFORM EXTRACT OF C. LENTILIFERA

TABLE 3: LIST OF COMPOUNDS IDENTIFIED FROM CHROMATOGRAM OF METHANOLIC EXTRACT OF C. LENTILIFERA

TABLE 3A: LIST OF COMPOUNDS IDENTIFIED FROM CHROMATOGRAM OF METHANOLIC EXTRACT OF C. LENTILIFERA 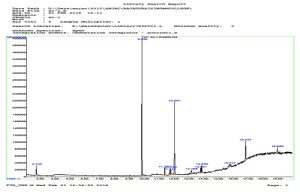 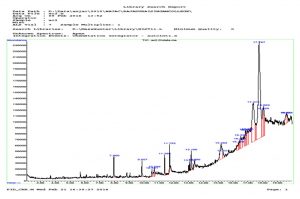 Analysis of Phytochemicals: Algae has a wide variety of natural pigments like chlorophyll, carotenoids and phycobiliproteins, which exhibit colors ranging from green, yellow, brown and red 39-42. The results were corroborated with the previous reports. Algae pigments have great commercial value as natural colourants in nutraceutical, cosmetics, and pharmaceutical industry as well as their health benefits 43-46.

Whereas, Octadecanoic acid, ethyl ester exhibited Antimicrobial activity 56. Dodecanoic acid and methyl ester exhibited Osteoporosis 57, Caffeine showed best synergistic activity with Mupirocin, Amoxyclav, Chloramphenicol, Rifampicin, and Linezolid antibiotics when tested against Staphylococcus  aureus and MRSA 58,  While, it has been reported that, Diethyl phthalate is widely used as a plasticizer and softener, pharmaceutical coatings, cosmetic additives and also as an insecticide 59.  It has been stated that, Cis-9, 10- Epoxyoctadecan-1-ol responsible for antimicrobial, analgesic, anti-inflammatory, anticancer, anti-oxidant, hepatoprotective, anti-arthritic and diuretic activities 60. Whereas, Chloroacetic acid and Pentadecyl ester have antioxidant activity 61. Thus, various biological activities have been reported for these phytocomponents and the results of the present investigation have indicated the pharmacological significance of Caulerpa lentillifera. Fatty acids derived from marine organisms have varies chemical structures that served as biological markers. It has the ability of the biological activity due to the characteristic of living environment 62.

Several studies have reported the activity of essential fatty acids from seaweed. ω-3 and ω-6 obtained from Undaria pinnatifida could act as anti-inflammatory and pro-inflammatory 63. ω-3 has several functions for health, including anticancer 41 and prevent cardiovascular disease 64. It has been reported that some seaweed has a low-fat content but high in PUFA 65. The process of drying seaweed showed some differences in fatty acid composition 66 stated during drying some of the mechanisms that occur including decreasing of water content, lipid oxidation, diffusion, and exchange, could affect the differences in fatty acid composition.

Caulerpa lentillifera is usually eaten raw with vinegar, as a snack or in a salad. In the Philippines, after being washed in clean water, it is usually eaten raw as a salad, mixed with chopped raw shallots and fresh tomatoes. It is known to be rich in iodine. Several health benefits have been reported for Caulerpa lentillifera including diabetes and lipid-lowering properties.

CONCLUSION: Isolation of individual phyto-chemical constituents from Caulerpa lentillifera and subjecting them to meticulous biological screening can give fruitful results. From the results, it could be concluded that Caulerpa lentilifer contains various bioactive compounds. Therefore, it is recommended as seaweed of phyto-pharmaceutical importance. The highest anti-oxidant activity obtained from dried seaweed showed by its IC50 value, which is influenced by its phytochemical content and fatty acids. Therefore, fatty acids could be as antioxidants, which could also be preventive as pro-oxidant.

ACKNOWLEDGEMENT: The authors wish to thank the Principal and P.G and Research Department of Zoology, Raja Doraisingam Government Arts College, Sivagangai, Tamil Nadu, India for providing all the facilities, library, and support during the tenure of this study.