SCREENING OF PHYTOCHEMICALS, GC-MS BASED PHYTOCONSTITUENTS PROFILING AND ANTIBACTERIAL EFFICIENCY OF LEAVES EXTRACTS OF ANISOMELES MALABARICA

SCREENING OF PHYTOCHEMICALS, GC-MS BASED PHYTOCONSTITUENTS PROFILING AND ANTIBACTERIAL EFFICIENCY OF LEAVES EXTRACTS OF ANISOMELES MALABARICA

K. A. Supriya * and Lali Growther

ABSTRACT: The present study aimed to determine the phytochemical components of the leaf extracts of A. malabarica, antimicrobial, antioxidant activities and GC-MS analysis. The leaves extracts have folklore and traditional applications in India. The polar and non-polar solvents extracts such as methanol, ethyl acetate, chloroform, hexane and water were used for various phytochemical analysis proved the existence of flavonoids, glycosides, phenols, 3terpenoids, tannins and alkaloids. Similarly, five different extracts of A. malabarica were tested for the antibacterial activities against five human pathogens. The present results revealed that, the different solvent extracts showed maximum zone of inhibition against all the tested strains. The plant extract was highly effective against E. coli and E. aerogenes. In addition, the extracts noted promising GC-MS analysis showed the presence of bioactive phytochemicals.

INTRODUCTION: Plants are a rich source of therapeutic compounds that have tremendous applications in the pharmaceutical industry. Since ancient times, ethnobotanical knowledge subsists in India, and people use herbs as a source of medicines, especially for primary healthcare. The country has about 45,000 plant species, and many of them have been studied for their medicinal properties 1. The role of the World Health Organization (WHO) is to encourage, promote and facilitate effective herbal medicine for primary use in developing countries for different health programs.

Different biological activities like anti-microbial, anti-oxidant, sedative and anxiolytic effects of the plant extracts may be due to presence of the active compounds. According to World Health Organization (WHO), medicinal plants which are using mainly for the preparation of different herbal medicines are curing diseases of an estimated 1.5 billion (currently about 3.5 billion, i.e. 88%) of the world population 2. The mechanism of action and efficiency of herbal extracts in most cases are yet to be scientifically validated. Therefore, significant work has been carried out by researchers to focus their attention towards traditional medicines for the development of outstanding drugs used against different varieties of microbial infections. Phytochemicals are more promising than synthetic chemicals due to their generation from living organisms, potential biological actions and innate stereo-chemistry allowing their binding to protein pockets 3.

The present study is designed to investigate the secondary metabolites of A. malabarica and characterization of compounds using GC-MS analysis to explore the presence of phyto-constituents which could be helpful to treat many diseases and disorders. 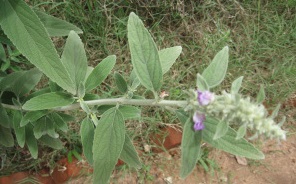 Preparation of Plant Extracts: The leaves of A. malabarica were washed repeatedly with running tap water and distilled water to remove the dust and shade dried at room temperature (26±2 ºC) for 10-15 days. The dried leaves were coarsely powdered using pulverizer. The leaf powder of 100g was taken in Soxhlet apparatus with different solvents such as hexane, Petroleum ether, chloroform, ethyl acetate, ethanol and water. Then the extracts were concentrated using rotary evaporator under reduced pressure and the residues were dissolved in DMSO 1mg/ml concentration and stored in amber colored glass vials at 4 ºC for further use. The extraction process was repeated thrice and total yield of extracts were recorded and tabulated.

Multiple Screening of Phytochemicals: Qualitative and quantitative screening for the presence of active phytochemicals in leaf extracts was carried out using Harborne et al., 1984, Trease and Evans, 1996 4, 5.

Gas Chromatography – Mass Spectrometry Analysis: GC–MS analysis was carried out by GC SHIMADZU QP 2010 system at KFRI, Peechi, Thrissur. Gas chromatography coupled with Mass spectrometer (GC–MS) equipped with elite one fused silica capillary column (30.0 m: length, diameter: 0.25 mm, film thickness: 0.25 mm is composed of 100% dimethyl poly siloxane) was used. Electron ionization energy of 70 eV helium gas (99.9%) was used as carrier gas at a constant flow rate of 1.51 mL/min and an injection volume was employed (split ratio: 20). The injector and ion source temperature was maintained at 200 °C. The oven temperature was programmed from 70 °C (isothermal for 2 min), with an increase to 300 °C for 10 min. Mass spectra were recorded at 70 eV; at a scan interval of 0.5 seconds with scan range from 40–1000 m/z. Total GC running time was 35 minutes. The percentage of each component was calculated by comparing its average peak area to the total area (GC–MS solution ver. 2.53).

Percentage Yield of Different Solvent Extracts: Exploration for new active pharmacological compounds for drug development is an important issue, but not the only one, as the trend towards using standardized plant extracts of high quality, safety and efficacy will continue. Whole plant powder of A. malabarica (100 g) was successively extracted with different solvents such as hexane, chloroform, ethyl acetate, methanol and aqueous (500 mL) and yield of the extracts from plants were recorded. The solvent was removed by rotary evaporator under reduced pressure at 40°C, which yielded thick colloidal extracts, after which it was stored at 4°C for further biological assays.

The maximum yield was obtained in methanol (5.02%), followed by ethyl acetate (3.19%) and aqueous (3.05%). The yield was only 2.09% and 1.35% in chloroform and hexane, respectively. The colour of extracts ranged from light green to light brown and the consistency was between powder and that of a paste Table 1.

Preliminary Phytochemical Analysis: The quailitative phytochemical analysis of 5 different extracts of A. malabarica revealed the presence of active phytochemicals such as alkaloids, carbohydrates, coumarin, flavonoid, glycosides, phenols, quinones, saponins, steroids, tannins, terpenoids and triterpenoids to a greater extent in the polar solvents. Among this, methanolic extract of A. malabarica found to have maximum phyto-chemicals than the other plant extracts and over other plants Table 2.

TABLE 2: QUALITATIVE ANALYSIS OF PHYTOCHEMICALS OF A. MALABARICA

Presence of various bioactive compounds could justify using plants against different ailments by traditional practitioners. Many polyphenolic compounds were reported from the family of Meliaceae. Phytochemicals from A. indica possess various biological properties i.e. antibacterial especially against drug resistant bacteria 7, 8. The phenolic groups in the extract may inhibit the growth of bacteria through the formation of protein-phenolic groups between hydroxyl groups and cell membrane of protein, which disrupts the cell membrane and cause death of bacteria 9.

Flavonoids and phenolic acids, the largest classes of plant phenolics, are biosynthetically derived from the acetate as well as the shikimate pathway from phenylalanine or tyrosine. Phytochemicals from these classes were found to have excellent anti-oxidant activity in both in-vitro and in-vivo investigations 12. Saponins have a soapy characteristic and characterized as glycosides, which could facilitate the absorption of food and medicine. Tannins have been reported to prevent the development of bacteria by precipitating microbial protein and making the bacteria could not able to use the nutritional protein for their growth. Tannins also could disturb the extracellular microbial enzymes and oxidative phosphorylation which in turn initiate iron deprivation, the most important material for bacterial growth. Flavonoid from plant extract may inhibit the cytoplasmic membrane function and energy metabolism of bacteria 13, 14. Similarly, Terpenoids have been found to be useful in the prevention and therapy of several diseases, including cancer. Terpenoids are also known to possess antimicrobial, antifungal, antiparasitic, antiviral, anti-allergenic, antispasmodic, antihyperglycemic, anti-inflammatory and immuno-modulatory properties 15.

GC-MS Analysis of A. malabarica: Gas chromatography coupled with mass spectroscopy was performed to analyze and identify the volatile and non-volatile nature of phytochemicals present in the three different extracts such as chloroform, ethyl acetate and methanol. Among this, methanolic extract possessed more than 24, in that 8 phyto-constituents are considered as major and remaining 16 are considered as minor based on the percentage of peak area. Tridecyl acrylate (31.90), Tetratetracontane (10.90), Phytol, acetate (10.34), Hexadecane (5.39), Phytol (5.33), Heptadecane (4.36%), Nonadecane (4.07) and ethyl palmitate (3.95%). Similarly, ethyl acetate extract revealed the presence of 7 major and 12 minor phyto-constituents such as Tridecyl acrylate (24.42), 1-Dodecanol (11.41), Phytol, acetate (13.21), n-Decylpropanoate (7.47), Perhydrofarnesyl acetone (6.14) and (E)-phytol (5.03%). Whereas, in chloroform extract 4 major and 10 minor phyto-constituents were found such as Hentriacontane (45.29), 2-methyloctacosane (12.35), Tetratetra-contane (8.31) and Cholesteryl ethyl ether (7.08). From the results, it was clear that, totally, 57more different phyto-constituents were present in the A. malabarica.

All of them were aliphatic and aromatic compound; the mass spectra of the phyto-constituents were matched with those found in the NIST/NBS spectral database Fig. 2 – Fig. 7, Table 4-Table 9.

FIG. 2: GAS CHROMATOGRAPHY PROFILE OF CHLOROFORM EXTRACT OF A. MALABARICA

TABLE 4: PHYTOCONSTITUENTS IDENTIFIED IN ETHYL ACETATE EXTRACT OF A. MALABARICA

FIG. 3: GAS CHROMATOGRAPHY PROFILE OF CHLOROFORM EXTRACT OF A. MALABARICA

TABLE 5: PHYTOCONSTITUENTS IDENTIFIED IN CHLOROFORM EXTRACT OF A. MALABARICA

FIG. 4: GAS CHROMATOGRAPHY PROFILE OF METHANOL EXTRACT OF A. MALABARICA

TABLE 6: PHYTOCONSTITUENTS IDENTIFIED IN METHANOL EXTRACT OF A. MALABARICA

TABLE 7: PHYTOCONSTITUENTS IDENTIFIED IN PETROLEUM ETHER EXTRACT OF A. MALABARICA

FIG. 6: GAS CHROMATOGRAPHY PROFILE OF ETHANOL EXTRACT OF A. MALABARICA

TABLE 8: PHYTOCONSTITUENTS IDENTIFIED IN ETHANOL EXTRACT OF A. MALABARICA

FIG. 7: GAS CHROMATOGRAPHY PROFILE OF HEXANE EXTRACT OF A. MALABARICA

TABLE 9: PHYTOCONSTITUENTS IDENTIFIED IN HEXANE EXTRACT OF A. MALABARICA

The GC-MS analysis of different extracts of A. malabarica lead to the identification of 97 phytoconstituents. These compounds were identified through mass spectrometry attached with GC. The mass spectrometer analyzes the compounds eluted at different times to identify the nature and structure of the compounds. Five different extracts possess unique physicochemical characteristics which may be attributed to the compounds naturally present in significant quantities in the leaves of A. malabarica. Phytol was proven to exhibit antioxidant and antinociceptive effects 16, 17. Phytol, precursor of synthetic vitamin E and vitamin K, was found to be cytotoxic against breast cancer cell lines (MCF7). In addition, squalene possessed antioxidant, chemopreventive, antitumor and hypocholestero-lemic activities 18.

TABLE 10: ANTIBACTERIAL ACTIVITY OF METHANOL EXTRACT OF A. MALABARICA ON HUMAN PATHOGENS

FIG. 8: ANTIBACTERIAL ACTIVITY OF METHANOLIC EXTRACT OF A. MALABARICA ON DIFFERENT HUMAN

CONCLUSION: Anisomeles malabarica is an important traditional medicinal plant, which possess rich source of phytocompounds. The results of the present study revealed that, methanol extract of A. malabarica possess many compounds than the other four different solvent extracts, among all the tested pathogens, methanolic extract illustrated the robust antibacterial activities against A. baumannii, E. coli and K. pneumoniae strains and it could be used as powerful antimicrobial agents to prevent many diseases in the near future. Further, extensive research is required to identify and explore bioactive compounds from this plant and the present study extended to check their antioxidative and other biological properties.

ACKNOWLEDGEMENT: The authors are thankful to the Principal and Management of Hindusthan College of Arts and Science, Coimbatore for providing the laboratory facilities to carry out this research work.