ABSTRACT:  In the present study, the hydro-alcoholic and hexane extracts of the plant, Valeriana jatamansi (Family: Valerianaceae) were screened for antimicrobial activity against pathogenic and drug resistant strains.  The non polar extracts did not showed any activity against any of the pathogenic strains. Amongst these extracts the hydro-alcoholic extracts of the plant, Valeriana jatamansi, showed potent antimicrobial activity against almost all the pathogens studied. These extracts also showed potent antibacterial activity against multidrug resistant Staphylococcus aureus and Pseudomonas aeruginosa in the ranges from 0.3 mg/ml to 0.7 mg/ml. The potent hydro-alcoholic extract was further subjected for isolation and characterization of potent antimicrobial compound via chromatographic and spectroscopic techniques. The pure compound isolated, Valerenic acid was obtained as colorless liquid with a penetrating aroma; slightly soluble in water, soluble in alcohol, and ether. It melts at -34 0C and boils at 186 0C. The compound showed Rf value 0.37 similar to that of the standard compound, Valerenic acid as detected by TLC. The retention time of the pure compound purified was found to be 4.300 minutes as compared to the Standard reference compound, Valerenic acid which showed its retention time 4.393 minutes while eluting out through the column as determined by HPLC. The active compound was further subjected to FT-IR analysis which confirmed the TLC and HPLC data

INTRODUCTION: Natural products and their derivatives represent more than 50% of the drugs in clinical use in the world. One of the paramount reasons for pursuing natural products chemistry resides in the actual or potential pharmacological activity to be found in alkaloids, terpenoids, coumarins, flavanoids, lignans, glycosides etc. Since the advent of antibiotics in the 1950’s, the use of plant derivatives as a source of antimicrobials has been virtually non-existent

Antimicrobial plant extracts have been recognized as a future source of new antimicrobials in the event of the current downturn in the pace at which these are being derived from micro-organisms 2. These antimicrobial compounds isolated from plants are found to be very effective in comparison to traditional medicines and produces no side effects.

The biological activity of many plants has been known through scientific research and any literature search via the internet or elsewhere, would reveal that numerous new publications are added to the scientific literature every day.  In the present investigation, Valeriana jatamansi extracts (hydro-alcoholic and hexane) were screened for antimicrobial activity against pathogenic and drug resistant microbial strains in lieu of isolation and identification of antimicrobial compound.

The plant parts were separated, washed with distilled water, dried under shade and pulverized. The method 3 for preparation of extracts was slightly modified. Briefly 20 g portions of the powdered plant material was soaked in different solvents i.e. hydro-alcohol (50%v/v) and hexane for 72 h. Each mixture was stirred every 24 h using a sterile glass rod. At the end of extraction, each solvent was passed through Whatmann filter paper No. 1 (Whatmann, England) The filtrates obtained were concentrated in vacuo using water bath at 300C. The potent extracts of the plants were subjected for isolation and characterization of active principles.

Fungal strains used for the study:

Bacterial strains used for the study:

The agar well diffusion method 4 was modified. Sabouraud’s dextrose agar (SDA) was used for fungal cultures. The culture medium was inoculated with the fungal strains separately suspended in Sabouraud’s dextrose broth. A total of 8mm diameter wells were punched into the agar and filled with plant extracts and solvent blanks (hydro alcohol, and hexane). Standard antibiotic (Fucanazole, concentration 1mg/ml) was used as positive control and fungal plates were incubated at 37oC for 72h. The diameters of zone of inhibition observed were measured.

The same procedure was adopted for antibacterial activity. Soyabean Casein Digest Agar (SCDA) was used for bacterial cultures. The culture medium was inoculated with the bacterial strains separately suspended in Soyabean Casein Digest broth. A total of 8 mm diameter wells were punched into the agar and filled with plant extracts and solvent blanks. Standard antibiotic (Fucanazole, Chloramphenicol concentration 1mg/ml) was used as positive control and culture plates were incubated at 37oC for 72 h (for antifungal assay) and for 24 h (for antibacterial assay). The diameters of zone of inhibition observed were measured.

Determination of MIC and MBC:

Phytochemical screening of the extract:

The 0.5g of the plant extract was dissolved in 5ml of 1% HCl and was kept in water bath for about 2 minutes. 1ml of the filtrate was treated with Dragendroff’s reagent Turbidity or precipitation was taken as indicator for the presence of alkaloids.

About 0.5g of the sample was dissolved in 10ml of boiling water and was filtered.  Few ml of 6% FeCl3 was added to the filtrate. Deep green colour appeared confirmed the presence of Tannins.

About 0.2gm of the extract was dissolved in methanol and heated for some time. A chip of mg metal was introduced followed by the addition of few drops of conc. HCl. Appearance of red or orange color was Indicator of the flavanoids.

About 0.5g of the plant extract was stirred with water in the test tube. Frothing persists on warming was taken as an evidence for the presence of saponin.

Salkowaski method was adopted for the detection of steroids. About 0.5g of extract was dissolved in 3ml of chloroform and filtered. To the filtrate, conc. H2 SO4 was added to form a lower layer. Reddish brown color was taken as positive for the presence of steroids ring10.

About 0.5 g of the extract was dissolved in 2ml of glacial acetic acid containing 1 drop of 1% Fecl3. This was under laid with conc. H2 SO4. A brown ring obtained at the interphase indicates the presence of deoxy sugar. A violet ring appeared below the ring while in the acetic acid layer a greenish ring appeared just above ring and gradually spread throughout this layer.

1ml each of Fehling’s solutions, I and II was added to 2 ml of the aqueous solution of the extract. The mixture was heated in a boiling water bath for about 2-5 minutes. The production of a brick red precipitate indicated the presence of reducing sugars.

Sintered glass column fitted with stopper (i.d., 1.5 and length 100cm) was filled with silica gel G (for column chromatography) with procedure described below. The elutions of the compounds were carried out at the room temperature and pressure.

The potent extract of the plant having the highest antimicrobial activity were subjected to liquid-liquid fractionation. The highest antimicrobial fractions were chromatographed on 2x30 cm silica gel  open column using a stepwise gradient of n-hexane and increasing amount of ethyl acetate (20 % at each step); ethyl acetate with increasing amount of methanol (10 % at each step); and finally at 40 % methanol. Collected fractions were evaporated under vacuum and examined by TLC. Homogeneous fractions were pooled to give large number of different fractions. These fractions were examined using Silica gel coated TLC plates to confirm the pure compound by changing the ratios of the solvent system components.

Once the column was filled with eluent, the column was allowed to run. A quick flow rate helps to give good separation.  By adjusting the air pressure to give a swift flow rate, different coloured bands were appeared in the column. After collecting these fractions the column's progress were monitored by TLC.

Silica gel G used for thin layer chromatography (TLC) was activated in hot air oven at 110°C for one hour.

Preparation of thin layer plates and loading of sample:

Structure elucidation of isolated compounds by combination of different techniques:

Identification of compound was done by using a combination of different techniques including HPLC and FT-IR Besides these characterization techniques, Rf values and melting point of the active compounds were also determined.

The column used was a C-18 block heating-type Shim-pack VP-ODS (4.6mm interior diameter × 150mm long) with a particle size of 5μm. Mobile phase was designed as per the nature of the compound, containing 50% acetonitrile along with 50 % Phosphate buffer was used at a flow rate of 3.0 ml/min, column temperature 25°C. Injection volume was 40µl and detection was carried out at specific wavelength having maximum absorbance as calculated by UV absorption spectra at maximum wavelength.

In this study, the hydro-alcoholic and hexane extracts of Valeriana jatamansi were screened for their antimicrobial activity against multi-drug resistant strains (isolated from Clinical samples, pus and blood of patients) and other pathogenic strains. Hydro-alcoholic extract of the plants showed significant antimicrobial activity in comparison to hexane extract against all the pathogens and against MDR Staphylococcus aureus and Pseudomonas aeruginosa. 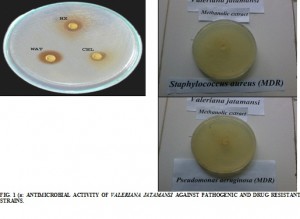 FIG. 1 (a: ANTIMICROBIAL ACTIVITY OF VALERIANA JATAMANSI AGAINST PATHOGENIC AND DRUG RESISTANT STRAINS.

FIG.1: (b): ANTIFUNGAL ACTIVITY OF THE EXTRACTS OF VALERIANA JATAMANSI 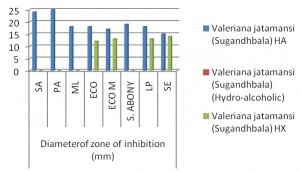 FIG.2: ANTIBACTERIAL ACTIVITY OF THE EXTRACTS OF VALERIANA JATAMANSI

TABLE 1: ANTIFUNGAL ACTIVITY OF THE EXTRACTS OF VALERIANA JATAMANSI

TABLE 2: ANTIBACTERIAL ACTIVITY OF THE EXTRACTS OF VALERIANA JATAMANSI

Isolation and Identification of the antimicrobial compound:

The pure compound isolated, Valerenic acid (pentanoic acid or propylacetic acid in systemic naming) is a member of short chain straight fatty acids. It was obtained as colorless liquid with a penetrating aroma; slightly soluble in water, soluble in alcohol, and ether. It melts at -34 0C and boils at 186 0C. The compound showed Rf value 0.37 similar to that of the standard compound, Valerenic acid. The pure compound, valerenic acid (as compared with that of standard) was further subjected for antimicrobial and antioxidant screening (data not shown). The pure compound fraction was further subjected to HPLC and FTIR analysis. The results are shown in Fig. 3 to 6. 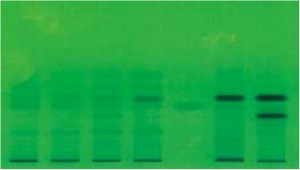 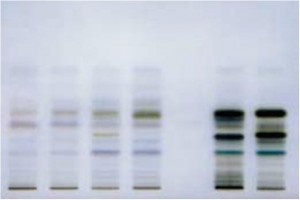 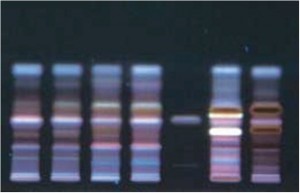 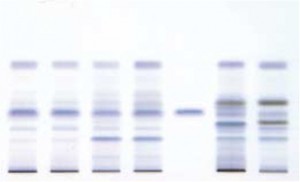 The retention time of the pure compound purified was found to be 4.300 minutes as compared to the Standard reference compound, Valerianic acid which showed its retention time 4.393 minutes while eluting out through the column. This analysis thus confirmed about the separation and identification of the purified active compound. The results are indicated in Figure 7 and 8. 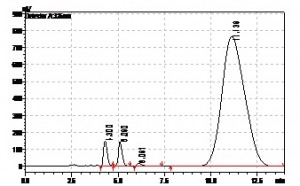 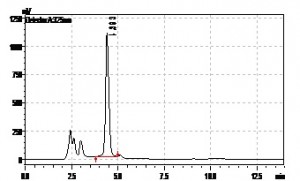 The IR spectrum of isolated compound was recorded in Roorkee Research and Analytical Laboratory Pvt. Ltd., Roorkee (Uttarakhand), India using a computerized FT-IR spectrometer (Perkin Co., Germany) in the range of 4000–500 cm-1 by the KBr pellet technique. The active compound was isolated and identified by spectral analysis using FT-IR with literature values. The results are shown in Fig.9. 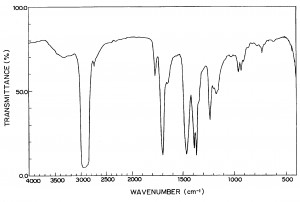 CONCLUSION: The use of the plant in the treatment of pathogenic diseases associated with the infection of these pathogens is validated, scientifically supported by the results obtained in this work. The present study thus suggests that compound isolated, Valerenic acid characterized is found to be most potent antimicrobial agent and can be further utilized in formulating a new antimicrobial drug. The results thus signify that the drug prepared from the compound isolated can be utilized in treatment of infections associated with such pathogens.