ABSTRACT: The lectins are glycoproteins or sugar binding proteins of non-immune origin but are barred from sugar binding antibodies and enzymes. Lectins are isolated and purified from seeds of Glycine max by soxhlet extraction and dialysis. These collected crude lectins were centrifuged till pH is shifted downward to optimal pH for coprecipitation. Filtration of the same carried out on a Buchner funnel with a pad of Hiflo Supercel on whatman paper. Galactose was added as a ligand to the mixture kept at 250C for 10-20 min. It formed matrix coprecipitation which was centrifuged to remove additional particulates. Supernatant was removed and retained the galactose lectin coprecipitate which finally yields lectins, further purified by dialysis. Encapsulation by spray drying using maltodextrin and lactose along with the Eudragit S100 targeted the drug moiety to colon. Purified Lectins have the binding property of carbohydrate moieties on the surface of erythrocytes which agglutinate the erythrocytes, these lectins were evaluated by the agglutination test using ‘A’ positive blood group. These lectins showed anticancer activity against the colorectal type of cancer cell lines HCT- 116; proved as new link for developing anticancer drug specific to colorectal adenomas from Glycine max seeds. Calculated IC50 value by SRB cytotoxic study which was found 12 compared with capecitabine as standard anticancer drug which was

INTRODUCTION: Lectins and History: Term “lectin” is from the Greek word “legere” was coined by William Boyd in 1954, “legere” means “to select” or “to unite” 1. The lectins are described as sugar binding proteins or glycoproteins of non-immune origin excluded from sugar binding antibodies and enzymes 2. Lectins are widely distributed from bacteria to humans, which have as a minimum one non-catalytic area that shows reversible binding to particular monosaccharides or oligosaccharides. Lectins are easily detected by agglutination of erythrocytes. Lectins are classifieds on the basis of their overall structure and biochemistry of the subunits viz., merolectins, hololectins, chimerolectins and superlectins

Soybean and chemistry of soybean lectins:

Soybean (Glycine max; Family: Fabaceae) plant is member of legume family native to East Asia. Soybean lectin is a protein, which have ability to bind with the carbohydrate so called as the glycoprotein. They have high binding protein specificity to fatal non-reducing N-acetyl-D-galactosamine but less to D-galactose. They have important role in cell to cell communication 5, 7.

Soybean also decreases the chances of breast and prostate cancer. They reduce the protein digestion due to the presence of the protein inhibitor5, 7.

Soybean seeds were finely grounded and was weighed accurately about 100 g, then wrapped in filter paper and placed in soxhlet apparatus for extraction. Different extraction solvents were used separately for isolation of lectins as acetone, 0.015 M phosphate buffer of pH 7.2 in 0.15 M NaCl and methanol (500 ml each). Extraction was carried out for 1-1.30 hour with continuous stirring.

Collected lectins processed for centrifugation which was carried out to remove bulk particles. Coprecipitation was formed by shifting pH downward to optimal pH and the solution is kept overnight in the cold room. Remaining particulates removed by a combination of centrifugation; filtration was carried out on a Buchner funnel with a pad of hiflo supercel on whatman no. 1 paper. Obtained clear solution was adjusted to optimal pH. Galactose ligand added to the mixture and kept for 10-20 min. at 250C to form matrix coprecipitation and was centrifuged to remove additional particulates. Supernatant was removed and retained the galactose lectin coprecipitate, then dissolved in buffer of pH 8 and trapped on anion exchange resin in Cl- form. Received lectins were evaluated and processed for dialysis for purification.

Agglutination Test 21: Isolated and collected lectins were processed for agglutination test. Lectins were placed in different tubes and mixed with human blood of A+ve blood group.

Lectins have the property to agglutinate the erythrocytes. Soybean lectin forms a mesh like structure in between the blood erythrocytes which do not let the blood to be clumped. Assay was performed in two groups as positive and negative control.

It is common operation in biochemistry and protein biology which assist to separate dissolved molecule by passing through the semi-permeable membrane as per their molecular dimensions.

The spray-drying process of lectin done using the various excipients was undertaken in a laboratory scale spray dryer. The feed solution was pneumatically atomized into a vertical, concurrent drying chamber using a two-fluid nozzle at a constant flow rate (5ml. min‑1 to 20ml. min-1). The outlet temperature was adjusted from 110OC to 120OC by varying the air inlet temperature. The dried powder was collected in a single cyclone separator.

TABLE 1: RATIO OF LECTIN AND EXCIPIENTS TAKEN FOR SPRAY DRYING

Stock solution of lectin powder of 1 mM in 0.25% DMSO was prepared and further dilution was done in 10, 50 and 100µM with phosphate buffer saline (PBS).

Stock solution of Capecitabine of 1 mM in distilled water was prepared and further dilution was done in 10, 50 and 100µM with phosphate buffer saline (PBS).

Enter the absorbance reading from each well in the equation below to calculate the cell survival rate.

Test carried out for agglutination was found positive for lectins in PBS which was used as solvent for soxhlet extraction.

For this assay human blood sample of A+ve blood group was used. Tests were compared with positive and negative control assay. PBS had shown the positive results for lectins.

*Selected batch for activity as per agglutination studies result

Cytotoxic activity of Methanolic extract of lectin (L. P. A. test) and Capecitabine were investigated against SRB assay and cytotoxicity was reported in terms of lethality concentration (LC50). The LC50 value of batch A, batch B, batch C, batch D and Capecitabine were 80 μg/ml, 75 μg/ml, 15 μg/ml, 50 μg/ml and 9 μg/ml respectively by SRB assay. Show in Table 3, 4, 5 and 6 and Fig. 1, 2, 3 and 4 respectively.

TABLE 3: SRB ASSAY FOR BATCH A

TABLE 4: SRB ASSAY FOR BATCH B 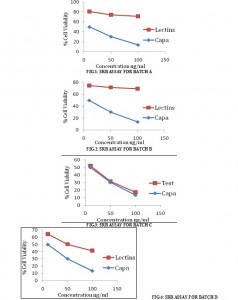 SUMMARY AND CONCLUSION: The present study was based on finding of anti-cancer activity of lectins obtained from the soya seeds. These days many synthetic agent used for curing many disorders like cancer and other diseases but they are available with many side effects. Consequently it was decided to generate such an agent with least or null side effects and corresponding to natural flora of Gastrointestinal tract.

Finally it was concluded that;