Uncontrolled inflammatory responses are associated with a vast range of conditions like allergies, cardiovascular dysfunction, cancer, arthritis, metabolic syndromes, and many autoimmune diseases. Various medicines used for controlling and suppressing inflammations like steroidal, non-steroidal and immune suppressant drugs are associated with adverse side effects primarily leading to gastrointestinal complications 2. Thus, there is a need for a natural drug or compound derived from sources like plants with effective anti-inflammatory property but with minimum side effects.

Macrophages are a part of the mononuclear phagocyte system. They play a vital role in different stages of inflammation by producing a wide range of biologically active molecules which can bring about both beneficial and detrimental outcomes in inflammation. When stimulated, macrophages release numerous cytokines and inflammatory mediators so that therapeutic interventions targeting macrophages as well as their products may help control inflammatory diseases. Therefore, macrophage cell lines are excellent models for screening anti-inflammatory drugs 3.

Lamiaceae is a plant family with about 7,000 plant species and enjoys a cosmopolitan distribution. Plants belonging to this family include Ocimum, Mentha, Leucas, Pogostemon, Thymus, etc., many of them are with medicinal properties and therapeutic value. Hence, they are used in the preparation of many herbal drugs for alleviating various ailments. Gomphostemma represents an under-exploited genus in this family. Some species of Gomphostemma are used in treating diarrhea and dysentery by the tribes of Wayanad, Kerala, India 4.

Many other species of Gomphostemma are used in North-Eastern states of India for alleviating malarial fever and inflammations caused by insect stings. Studies have shown that Gomphostemma is a rich repository of secondary metabolites like phenols, flavonoids, terpenoids, alkaloids, etc. 5

They are also reported to possess antioxidant properties 6. In the light of above background, the present study was aimed to screen the anti-inflammatory potential of selected species of Gomphostemma endemic to the Western Ghats by evaluating the effect of methanolic extracts of G. heyneanum var. heyneanum, G. heyneanum var. rottleri and G. eriocarpum on inflammatory mediators in LPS stimulated RAW 264.7 cells.

Preparation of Plant Extract: For in-vitro anti-inflammatory studies, 50 mg each of powdered material was extracted with methanol in a Soxhlet extractor. All the extracts were filtered and concentrated in a rotary evaporator. The crude extracts were then stored at 4ºC for further analysis.

Inhibition of Protein Denaturation: The effect of plant extracts on protein denaturation was studied by the method as referred with slight modifications 7. The reaction mixture consisted of different concentrations of plant extracts (62.5 μg, 125 μg, 250 μg and 500 μg/ml) and 1% aqueous solution of bovine albumin fraction. The pH of the solution was adjusted to 6.3 with 1 N HCl. The reaction mixtures were then incubated in 37 ºC for 20 minutes and then heated at 57 ºC for 20 min. After cooling, the turbidity was measured spectrophotometrically at 660 nm. The experiment was done in triplicates. Diclofenac sodium was used as the standard.

Proteinase Inhibitory Activity: Proteinase inhibitory activity of plant extracts were evaluated as per standard method with minor modifications 8. The reaction mixture (2 ml), containing 0.06 mg trypsin, 1 ml 20 mM Tris-HCl buffer (pH 7.4) and 1 ml test sample of different concentrations (62.5- 500 μg/ml) was incubated at 37 ºC for 5 min. Then 1 ml of 0.8% (w/v) casein was added. The mixture was incubated for an additional 20 min, and 2 ml of 70% perchloric acid was added to terminate the reaction. Cloudy suspension was centrifuged at 3000 rpm for 10 min. The absorbance of the supernatant was read against buffer as blank at 210 nm. Diclofenac sodium was the standard. The experiment was performed in triplicates and the percentage of inhibition was calculated.

Determination of Cyclooxygenase (COX) Activity: The assay was performed by Walker and Gierse method 9. The assay mixture containing 100μl of cell lysate was incubated with Tris-HCl buffer, 5 mM glutathione, and 5 mM hemoglobin for 1 minute at 25 ºC. The reaction was initiated by adding arachidonic acid (200 mM) and ended after 20 minutes incubation by adding 0.2 ml of 10% trichloroacetic acid in HCl and 0.2 ml of thiobarbituric acid. The contents were placed in a boiling water bath for 20 min, cooled, and centrifuged at 1,000 rpm for 5 min. The supernatant obtained was measured at 632 nm, and the percentage of COX inhibition was determined.

Determination of Cellular Nitrite Levels: The level of cellular nitrite was determined by standard protocol 10. The reaction mixture containing 0.5 ml of cell lysate and 0.1 ml of sulphosalicylic acid was vortexed well for 30 min. The samples were centrifuged for 15 min at 5,000 rpm. Estimation of nitrite levels was made with the supernatant. To 200 μl of supernatant 30 μl of 10% NaOH and 300 μl of Tris-HCl buffer was added and mixed well. Griess reagent (530 μl) was added to this and incubated in the dark for 15 min.

Absorbance was read at 540 nm against Griess reagent as blank. Diclofenac sodium was the standard. The amount of nitrite present in the samples was estimated from the standard curves.

Statistical Analysis: All experiments were done in triplicates and statistical analysis was done with SPSS version 10. Data obtained were subjected to one-way ANOVA and results were expressed as mean ± SE. Differences at p<0.05 were considered significant.

RESULTS AND DISCUSSION: Present study analyzed the anti-inflammatory potential of selected species of Gomphostemma by measuring the effect of plant extracts on various inflammatory mediators. The effect of extracts on inhibiting protein denaturation and proteinase activity was used for initial screening. The effective plant extract was further analyzed for its activity on inflammatory mediators like cyclooxygenase, cellular nitrite level, and iNOS. 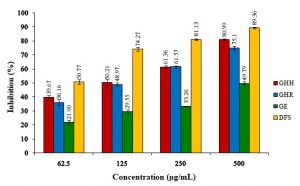 Proteinase Inhibitory Activity: Proteinases have a functional role in the appearance and development of inflammatory diseases. Studies have shown that proteinase inhibitors can minimize the tissue damages associated with inflammation 14, 15.

Since in both the assays, extract of G. heyneanum var. heyneanum displayed a better activity as compared to the other two taxa, it was further analyzed for its effect on RAW 264.7 cell lines. 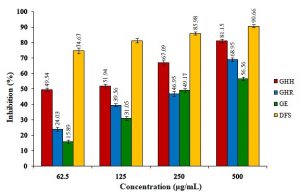 Anti-inflammatory and therapeutic potential of many nonsteroidal anti-inflammatory drugs is attributed to their inhibitory effect on cyclooxygenase enzymes 16. Treatment with extract of G. heyneanum var. heyneanum significantly reduced COX activity in a dose-dependent manner Fig. 3. This assay, therefore, clearly demonstrated the anti-inflammatory efficacy of the plant extract. 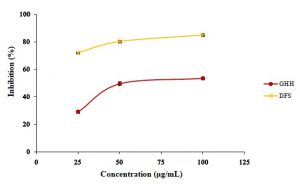 Determination of Cellular Nitrite Levels: Cellular nitrite level (NO) is a diagnostic marker of inflammation. The overproduction of NO as an inflammatory mediator can lead to tissue destruction, and therefore NO inhibitors are therapeutic targets in the management of inflammatory diseases 17. Treatment with different concentrations of plant extract induced a notable reduction in nitrite levels in a range similar to that of standard diclofenac Fig. 4. Reduction in nitrite level induced by the extract of G. heyneanum var. heyneanum reflects the anti-inflammatory potential of plant extract. 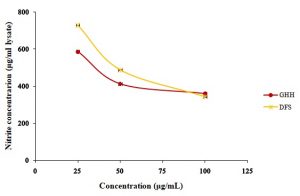 Determination of Inducible Nitric Oxide Synthase (iNOS): The nitric oxide synthase enzyme occurs in three isomeric forms of which, iNOS plays a vital role in inflammation. The inducible nitric oxide synthase (iNOS) is an important mediator in the inflammatory process and is involved in the production of nitric oxide in cells. Inducible nitric oxide synthase is a dimeric enzyme expressed in a variety of cells including macrophages. This enzyme in the presence of molecular oxygen and other co-factors converts amino acid arginine to citrulline and further to NO. Expression of iNOS generates high levels of NO for a prolonged time which in turn performs many immunoregulatory functions under a variety of pathophysiological conditions 18. But as cited previously, the excess amount of NO is injurious to cells. In the present analysis extract of G. heyneanum var. heyneanum induced a reduction in iNOS activity proportionate to increase in concentration Fig. 5. The reduction in cellular nitrite levels observed in the previous assay can be attributed to this reduction in iNOS activity and is thus justified. Since, regulation of iNOS can regulate the overproduction of NO, drugs which are selective iNOS inhibitors are regarded as effective anti-inflammatory agents. Studies have shown that many nonsteroidal anti-inflammatory drugs which are characterized as COX inhibitors also inhibit iNOS expression 19, 20.

The present study revealed the anti-inflammatory property of G. heyneanum var. heyneanum. Studies have proved that this species of Gomphostemma is rich in various phytochemical like terpenoids, phenols, flavonoids, etc. and has significant antioxidative potential 21. Anti-inflammatory activity exhibited by G. heyneanum var. heyneanum can be attributed to the presence of these phytochemicals. Further extensive studies are recommended to identify the specific component responsible for the activity. 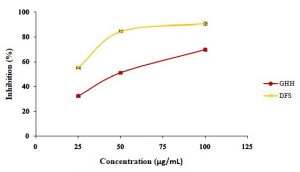 ACKNOWLEDGEMENT: The first author gratefully acknowledges the University Grants Commission for the award of FIP for doing this research work. The first author is also thankful to the Kerala Forest Department for granting permission to collect specimens from the forest areas.