ABSTRACT: The main objective of this research work was to check the presence or absence of the phytochemical chemicals in all the selected medicinal plant. Phytochemical analysis of these plants confirm the presence of various phytochemicals like saponins, tannins, amino acids, phenols, carbohydrates, proteins, flavonoids, steroids, alkaloids and glycosides. A. catechu extract are analyzed by using TLC with varying solvent systems. It was another test Column chromatography, Chloroform: methanol (2:8) gave three and six fractions. In FTIR, the functional groups such as 1º, 2º amines, amides, carboxylic acids, alkanes, 1º amines, nitro compounds, aliphatic amines, and alkyl halides and searched the identity of secondary metabolites, which may act as 3,7-Diacetyl-1,5-Dimethyl-3,7-Di azabicyclo- [3,3,1] Nonan-9-One compound and clearly indicates that phytochemical. Chemical constituents of eleven compounds were identified in the methanol extract. The major components were 3, 7-Diacetyl-1, 5-Dimethyl-3, 7-Di azabicyclo- [3, 3, 1] Nonan-9-One (27.80 and C13H20O3N2). The results were obtained suggest that, in addition to their pharmaceutical and medicine sources of 3, 7-Diacetyl-1, 5-Dimethyl-3, 7-Di azabicyclo- [3, 3, 1] Nonan-9-One compound from Acacia catechu methanol extract. However, much scope for further systematic research in screening Tamil Nadu medicinal plants for these phytochemicals and assessing their potential in protecting against different types of bioactivities and in-vitro activity, anticancer and antiulcer.

INTRODUCTION: Since ancient times, people have been exploring nature particularly plants in search of new drugs 1, 2. This has resulted in the use of a large number of medicinal plants with curative properties to treat various diseases 3, 4. In India, almost 95% of the prescriptions were plant-based in the traditional systems of Unani, Ayurveda, Homeopathy and Siddha 5.

Plant synthesizes a wide variety of chemical compounds, which can be sorted by their chemical class, biosynthetic origin, and functional groups into primary and secondary metabolites. In medicines, uses today are definitely not the same as those that were used in ancient times or even in the recent past. Several modifications, improvement, sophistication and newer discoveries have continuously contributed to the type, quality, presentation, and concept of medicinal preparation. In the development of human knowledge for therapeutic use, scientists endeavored to isolate different chemical constituents from plants, subjected them to biological and pharmacological tests, and then used them to prepare modern medicines 6, 7.

The beneficial medicinal effects of plant materials typically result from the combinations of secondary products present in the plant. But among the 250,000 - 500,000 plant species, only a small percentage has been investigated phytochemically 8. This research would be helpful to foster research aimed at the screening of phytochemical compounds.

Acacia catechu Willd. (Fabaceae) is a genus of shrubs and trees, first described in Africa. It has many nutritional properties, medicinal uses and widely used in traditional medicine especially in Asia. The main origin of this plant is Pakistan, India, Thailand, and Bangladesh. Modern technology has made easy to study pharmacological properties of traditional medicine so great interests have been developed in historical traditional plants 9. Major phytoconstituents are catechin, epicatechin, epigallocatechin, gallate, epicatechingallate, protocatechuic acid, phloro-glucin, lupenone, poriferasterol glycosides, L-arabinose, quercetin, kaempferol, D-galactose, D-rhamnose, and aldobiuronic acid, procyanidin, afzelchin gum, mineral, taxifolin and used as a hemostatic agent. Catechin present in this plant plays an important role as anti-oxidant and in-vivo, it is famous for astringent and tannin effect. The most common use of this plant is in the treatment of sore throat and for various pharmacological activities such as immunomodulatory activity, hypoglycemic activity in rats, antimycotic activity, antifungal activity, antibacterial activity, anti-inflammatory activity and oxidant activity 10. It contains polyphenolic components, tannins, alkaloids, carbohydrates, flavonoids and seeds of this plant are a good source of protein. It can also be considered useful as an external application for mouth ulcers and even reducing gingival inflammation. In rural areas, it is applied in the case of leprosy 11. Therefore, the present research was conducted to investigate the phytochemical constituents of Acacia catechu using FT-IR and GC-MS.

Plant Materials: Acacia catechu shade-dried stem bark was ground well by using a mixer grinder to get a fine powder. This powder was stored in an airtight container for later usage. 100 grams of this powder was packed in the thimble of the Soxhlet extractor and the methanol was loaded into the distillation flask. The stem bark extract obtained at the flask finally collected after the completion of Soxhlation. This methanol extract was taken to the FTIR and GCMS analysis.

Fourier Transform-Infrared Spectro Photometry: FTIR analysis was achieved using Perkin Elmer Spectrophotometer system, which was used to notice the typical peaks and their functional groups. FT-IR (Fourier Transform Infrared spectrophotometry is conceivably the most controlling tool for recognizing the kinds of chemical bonds (functional groups) present in compounds. The wavelength of light absorbed is distinguishing the chemical bond that can be seen in the annotated spectrum. The infrared absorption of the spectrum can be inferred using chemical bonds in a molecule that can be resolute. The plant constituents of the dried powder sample of methanol extract were used for FTIR investigation 13. One hundred Milligrams of the dried stem bark powder extract was condensed in KBr pellet, in order to prepare translucent sample discs. In FTIR spectroscopy powdered sample of plant specimens as loaded with a scan range from 400 to 4000 cm-1 with a resolution of 4 cm-1.

GC–MS Analysis: The analysis of unidentified constituents of GC-MS plays a major role in plant origin. The crude methanol (3µl) extract containing different compounds of Acacia catechu was subjected for (GC-MS) analysis. Instruments and chromatographic circumstances GC-MS examination was carried out on a GC clarus 500 Perkin Elmer system containing an AOC-20i auto analyst and gas chromatograph interfaced to a mass spectrometer (GCMS) instrument retaining the subsequent conditions; column Elite-1 attached silica capillary column (30 × 0.25 mm × ID × 1μm of capillary column, composed of (100% Dimethyl polysiloxane), operational in electron impact mode at 70 eV; helium (99.99%) was used as transporter gas at a persistent flow of 1 ml/min and an injection capacity of 0.5 EI was employed (split ratio of 10:1) inject or temperature 250 ºC; ion-source temperature 280 ºC. The oven temperature was programmed from 110 °C (isothermal for 2 min), with an increase of 10 °C/min, to 200 ºC / min, then 5 ºC/min to 280 ºC/min, finish with a 9 miniso thermal at 280 ºC. Mass spectra were occupied at 70 eV; a scan intermission of 0.5 seconds and fragments from 45 to 450 Da. The eluted constituent is identified in the mass detector. The spectrum of the unidentified constituent is matched with the spectrum of the recognized constituents stored in the NIST library and concludes the name and molecular weight 14. 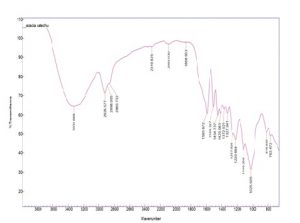 Gas Chromatography-Mass Spectroscopy: Mass spectra analyses of eleven compounds of A. catechu stem bark methanol extract were detected representing 100%, with a concentration of percentage (%) and molecular formula Table 3 and Fig. 3. 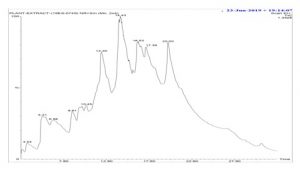 DISCUSSION: Plants are a very important source of potentially useful bioactive principles for the development of new chemotherapeutic agents. The biological and pharmacological properties of many plants are still unknown. World over, the scientists are exploring the potential of utilizing pharma-cologically active compounds from medicinal plants. Herbal medicines are used by 80% of the people worldwide due to its high efficiency, cheap cost, non-narcotic nature, and fewer side effects 15. Medicinal plants are eco-friendly, target-specificity, non-development of resistance, reduced number of applications, higher acceptability, and suitability for rural areas 16, 17. Phytochemicals could be substitutes for artificial insecticides within the future as these are moderately inexpensive, safe and are readily obtainable from various medicinal plants.

The results of our research highlights the preliminary phytochemicals, TLC, CC, FTIR, and GC-MS. This research is also comparable to earlier results by a phytochemical screening of some important medicinal plants was confirm the presence of different phytochemicals like saponins, terpenoids, steroids, anthocyaanins, coumarins, fatty acids, tannins, leucoanthocyanins and emodins 1. The studied bioactive compounds have a broad range of biological activity. For example, phytochemicals such as saponins have anti-inflammatory effects 18. Glycosides are known to lower blood pressure 19 and tannins exhibit antioxidant. Antimicrobial and antiviral was effected 20. The plant extracts were alkaloids that have been reported to exert analgesic, antispasmodic and antibacterial activity 21. Plant cells produce two types of metabolites. Primary metabolites are involved directly in growth and metabolism (carbohydrates, lipids, and proteins). Most natural products are compounds derived from primary metabolites such as amino acids, carbohydrates, and fatty acids and are generally categorized as secondary metabolites. Secondary metabolites are considered products of primary metabolism and are generally not involved in metabolic activity (alkaloids, phenolics, essential oils, terpenes, sterols, flavonoids, lignins, and tannins, etc.) 22. Thirty compounds of Jasminum officinale identified and observed approximately 99.28% in the oil. The main compound is phytol (25.77%) 23. Twenty-three compounds of the acetone leaf extract of Spathodae campanulata identified by the GC-MS. Gas chromatography of the Jasminum sambac oil was carried out to qualitatively and quantitatively analyze the oil constituents. The main compound identified is citronellal 24. Holm et al., 25 observed that the highest percentage of oil in dragonhead was 0.6% during the flowering stage, and the oil contained 90% oxygenated acyclic monoterpenes, i.e. geranial, geraniol, nerol, neral, and geranyl acetate. In our present study, eleven compounds were then identified in the GC-MS analysis. The major component provides in the methanol extract is 3, 7-Diacetyl-1, 5-Dimethyl-3, 7-Di azabicyclo- [3, 3, 1] Nonan-9-One. The facts show that 3, 7-Diacetyl-1, 5-Dimethyl-3, 7-Di azabicyclo- [3, 3, 1] Nonan-9-One is the major compound of A. catechu, and this component may have some of the pharmacological effects of A. catechu plant itself.

CONCLUSION: The present work has been performed to establish the various primary photochemical, TLC, CC, FTIR parameters and GC-MS, which could serve as important and has a commercial interest in both research institutes and pharmaceuticals companies for the manufacturing of the innovative drugs. This primary information will facilitate in conducting further studies on the discovery of bioactive constituents, resolve their efficacy by in vivo studies, and demonstrate their safety and efficacy in clinical trials.

ACKNOWLEDGEMENT: The authors are appreciative of superior power for a stipend of money related help with Award of University Research Fellowship. Furthermore, Professor and Head, Department of Zoology and Botany, Annamalai University for the laboratory facilities provided.